The end of the world

For centuries life was fragile. Infant mortality was high and disease was rife, so while the privileged might live to their expected threescore years and ten, most people were lucky to reach 50. Wars, epidemics, storms, floods, earthquakes, all threatened our survival. It was accepted by many as our fate and no doubt the Biblical vision of the Four Horsemen of the Apocalypse – pestilence, famine, war and death – haunted the thoughts of many. As the 19th century progressed, with increased industrialisation, pollution became a new threat and, as scientists studied the heavens in more detail there was a growing awareness of a cosmic threat. These fears fuelled a new branch of apocalyptic literature, which increased as the century drew to a close.

Plague was an everyday threat at the start of the 19th century. A ruined harvest in Ireland in 1816 had led to famine and homelessness, and with this an epidemic of typhus and dysentery killed over a million people, almost a fifth of the population. At the same time, a cholera epidemic that had started in India had spread across Asia, and by the early 1820s was threatening Europe before it receded by 1826. It killed millions including thousands of British soldiers stationed in India.

Mary Shelley, the author of Frankenstein was, at that time, still grieving the loss of her husband (drowned during a storm in 1822), and it was in that mood of desolation that she wrote The Last Man (1826). It is set towards the end of the 21st century, though the main characters are based on Mary herself and her now dead or lost friends including Percy Shelley and Lord Byron. The story follows a breakdown in society, which is accelerated by the arrival of a plague from Asia that soon kills everyone except for the novel’s narrator.

The novel includes a reference to a darkened sky and black sun, for which Mary drew upon her memory of the dreadful summer of 1816 where the weather was affected by the violent volcanic eruption of Mount Tambora in Indonesia in 1815. It was this that had caused the bad harvest in Ireland and that continued to affect the weather for several years.

Although science gained a better understanding of disease it also gave access to virulent viruses and bacteria. This gave rise to the idea that diseases might be released upon mankind either as germ warfare or by accident. M P Shiel has the Chinese invaders infected by cholera in The Yellow Danger (1898). In The End of an Epoch (1901) by the doubtless pseudonymous A Lincoln Green, a microbiologist tries to perfect a universal antibiotic, but in the process a vial of a highly virulent toxin is accidentally spilled and rapidly wipes out all but the aged in Britain, before spreading around the world.

The growth of heavy industry in Britain led to severe pollution in the cities, further aggravated by every home having coal fires so that the smoke-filled atmosphere combined with water vapour to create smog – though that word wasn’t created until 1905. Both sewerage and industrial waste were polluting the rivers. In The Doom of the Great City (1880), William DeLisle Hay depicts London suffocating under its pollution.

The writer Richard Jefferies had a passion for nature and the countryside and, suffering from tuberculosis, he could not live in the smog-ridden cities. He dreamed of a world that had reverted to nature and he describes this in After London (1885) where an unnamed catastrophe has wiped out most of humanity and nature has reclaimed the land. His portrayal of the rural landscape is lovingly described, but he depicts the few survivors trying to rebuild society as barbarous and violent.

As the Victorian era shifted to the Edwardian, mystery and thriller writer Fred M White penned a series where London suffered a succession of disasters. Under the umbrella title The Doom of London (1903) we find the city imperilled almost to destruction by smog, blizzard, pollution, earthquake, plague and commercial collapse. It says something for the resilience of Londoners that they come through it.

The Doom of the Great City 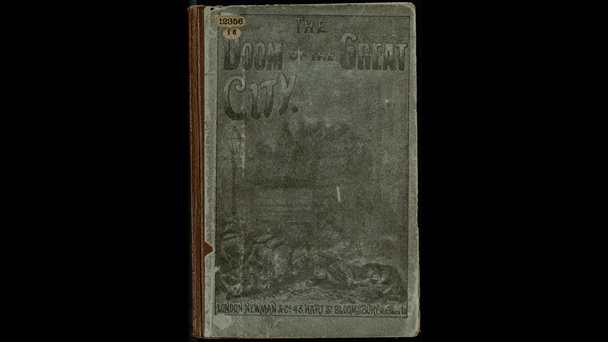 The Doom of the Great City (1880) by William DeLisle Hay depicts London suffocating under its pollution.

We have already seen how Mary Shelley witnessed the Year with no Summer in 1816 and incorporated the apocalyptic vision of a black sun in The Last Man. Lord Byron was also affected by it and wrote the gloomy poem ‘Darkness’ (1816), which looked towards the end of the world: ‘All earth was but one thought – and that was death ...’. No one at that time had connected the volcanic eruption in Indonesia with the famine in Ireland. At the end of the Victorian period, in The Purple Cloud (1901), M P Shiel has most of humanity wiped out when a toxic gas erupts from a volcano. The narrator survives because he was at the North Pole where the poisonous cloud did not reach.

In The White Battalions (1900), Fred M White suggests diverting the Gulf Stream to bring arctic conditions to Europe. Herbert C Fyfe foresaw, in ‘How Will the World End’ (1900), a cooling of the Earth and the eventual return of another Ice Age. Cutcliffe Hyne brought that cooling forward and in ‘London’s Danger’ (1896) has London frozen over, with no water available, and attempts to keep warm leading to a conflagration. With Britain powerless, other nations invade the colonies. One of the characters comments that it is the worst catastrophe to befall civilization since the loss of Atlantis. Ignatius Donnelly had revived interest in that lost world in Atlantis: The Antediluvian World (1882) where he stated that the cradle of civilization had been destroyed by flood. Cutcliffe Hyne explored Atlantis further in The Lost Continent (1900) where the advanced civilization is able to control earthquakes, but in the end their science gets the better of them and earthquakes destroy the land, which sinks beneath the waves.

In 1705 the astronomer Edmond Halley predicted when the comet now named after him would return. He did not live to witness it, but Halley’s Comet has returned as predicted every 75-76 years. When its approach in 1835 was imminent, writers turned their thoughts to possible consequences if a comet came too close. Both Oliver Wendell Holmes, in his poem ‘The Comet’ (1832), and Edgar Allan Poe in ‘The Conversation of Eiros and Charmion’ (1839) have the Earth destroyed by fire when a comet passes by. H G Wells also has the Earth almost destroyed in ‘The Star’ (1897) when a cosmic collision on the edge of the solar system sends space debris heading towards Earth. Fortunately, the Moon intervenes and saves the Earth from ultimate disaster, though there are still floods and earthquakes. George Griffith believed that our scientific knowledge would come to our aid. In ‘The Great Crellin Comet’ (1897) he has disaster averted by firing a projectile at the rogue comet, the first time such an idea appeared in print.

Illustration from 'The Star' by H G Wells 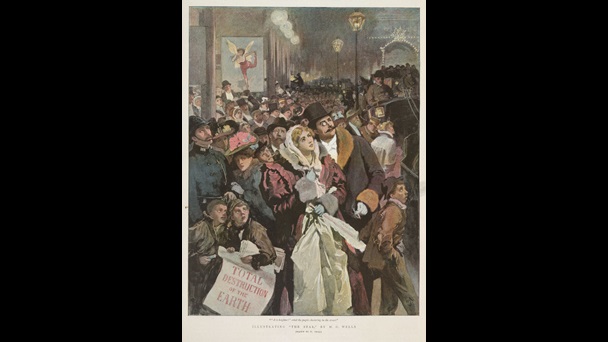 An illustration for H G Wells's 'The Star' (1897) in which a cosmic collision on the edge of the solar system sends space debris heading towards Earth.

The Last American (1889) is a rather tongue-in-cheek short novel by John Ames Mitchell. Set in 2951 it describes a Persian expedition sent out to see if the mythical America still exists. They discover a ruined world, which had collapsed in 1990 under its own racial, religious and cultural intolerance. In The Decline and Fall of the British Empire (1890) Australian Henry Marriott Watson believed that Britain would not survive the rise of socialism and being ruled by the masses. Its collapse is helped on its way by the Gulf Stream being diverted and an Ice Age returning to Britain. 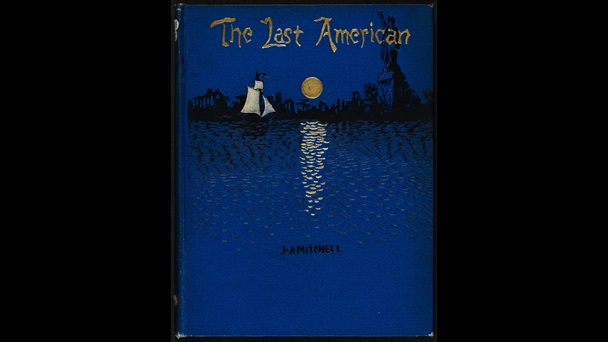 The Last American, 1889, a novel in which a Persian expedition is sent out to see if the mythical America still exists. They discover a ruined world, which had collapsed in 1990 under its own racial, religious and cultural intolerance.The cover of The Last American by John Mitchell, 1889.