The fear of invasion

In the 19th century, the British feared invasion by the French, terrorists and even aliens. Mike Ashley explains how these concerns were reflected in literature.

In the 19th century, Great Britain might have had the greatest navy in the world and ruled the waves, but the potential of new military technology, such as aerial bombardment or powerful artillery, made the British Isles increasingly vulnerable.

At the height of the Napoleonic wars between Britain and France, the propaganda machine on both sides presented various scenarios of the potential outcome. Both Britain and France staged farces such as La descente en Angleterre (The Raid on England, 1797) by Jean-Corisandre Mittié and the anonymous The Invasion of England (1803), but the real propaganda war was in the posters. In England, in defiance of the prospect of a peace treaty with France, James Gillray portrayed French soldiers marching through London in Promis'd Horrors of the French Invasion, -or- Forcible Reasons for Negotiating a Regicide Peace (1796). It was the new technology, though, that was most alarming. The French had first crossed the English Channel by hot air balloon in 1785, and the threat of an aerial invasion fleet was ever present in English minds. This was further aggravated by the idea of a Channel Tunnel, which Napoleon had considered and for which plans had been prepared by Albert Mathieu in 1802. The poster La Thiloriere ou déscente en Angleterre (Thiloriere or the invasion of England) produced in 1803 showed giant balloons capable of transporting 3,000 people along with horses. Another poster, released in 1804, showed huge troop movements across the Channel not only by balloon and boat but also through the tunnel.

The Battle of Dorking

In 1871 Lieutenant-Colonel George Tomkyns Chesney caused uproar with the anonymous publication in Blackwood’s Magazine of his story ‘The Battle of Dorking’. Chesney believed that Great Britain was unprepared for an armed invasion from Germany, especially after its victory in the Franco-Prussian War of 1870-71. The story is told in retrospect from 50 years in the future when a soldier recounts to his grandson the terrible events. Using a powerful new weapon (called only ‘fatal engines’) the German navy destroys the British fleet and soldiers land in Harwich. They march upon London and the final battle is at Dorking in the Surrey Hills. The British army is defeated. Germany takes control of Britain, and the Empire is disbanded. The reaction to the story was immediate. The British, having grown complacent with their military superiority, were horrified and the Government had to reassure the public that plans to review the army were already in hand. The story was published in a separate booklet and sold in tens of thousands throughout Europe. It also encouraged a host of sequels, including What Happened after the Battle of Dorking (1871), The Siege of London (1871), The Invasion of England (1882) and The Battle off Worthing: why the Invaders never got to Dorking (1887). Chesney’s alarmist story had catapulted the genre of future-war fiction into the public arena.

The Battle of Dorking 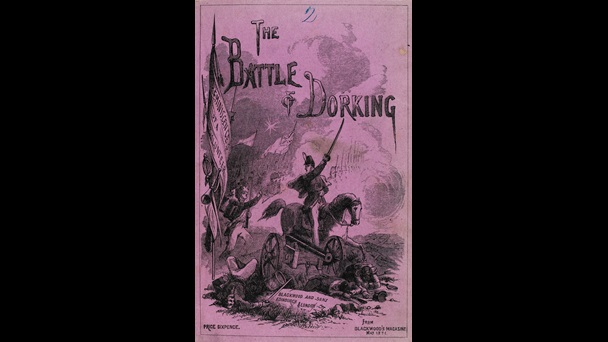 George Chesney’s imaginative story The Battle of Dorking (1871), ‘by a volunteer’ about the progress of an invasion of England, was intended to gain public support for an increase in defence spending.

The scale of future war

The French artist and author Albert Robida drew graphic attention to the inevitable horrors of future war with the power of new weaponry in La guerre au vingtième siècle (War in the 20th Century, 1887). Robida has a worldwide war start in 1945, fought using armed blockhouse tanks, submarines, aerial bombing and chemical warfare. The American Frank R Stockton also believed future wars would take advantage of new technology. In The Great War Syndicate (1889) he has a group of industrialists fight a war against Britain on behalf of the American government. Their weapons include rocket-powered bombs and mini-submarines that sabotage shipping.

The full scale of war was described in The Yellow Danger (1898) by M P Shiel in which an army of 180 million Chinese conquer Asia and Europe with only Britain holding out. The United States remained neutral until the final battle. The Chinese threat is diminished by, amongst other things, germ warfare.

The twin ideas of the super-inventor and future war came together at the end of the 19th century with a number of novels in which a super-scientist creates a fabulous machine with which he is able to hold the world to ransom. Jules Verne had sown the seed for this with Vingt mille lieues sous les mers (20,000 Leagues Under the Sea, 1870) where Captain Nemo uses his submarine, the Nautilus, to attack British ships in his hatred of the British. He also supports other revolutionaries. However this novel is primarily another of his voyages estraordinaire as is Robur le conquérant (Robur the Conqueror, 1886) where Robur, another misanthropic scientist, has created a heavier-than-air propeller-driven craft with which, in the sequel Maître du monde (1904), he declares himself ‘Master of the World’. Verne created another terrorist in Ker Karraje, a Malay pirate, in Face au drapeau (For the Flag, 1896). Karraje not only has his own super-submarine but, after he kidnaps the French inventor Roch, acquires his aerial torpedo and is bent on holding the world to ransom.

The eponymous female villain in Zalma (1895) by T Mullett Ellis seeks to continue her father’s efforts to destroy the nobility of Europe and plans to release balloons laden with anthrax over the capital cities, but is thankfully thwarted before she can carry out her plan. The British writer George Griffith introduced his terrorist organisation, the Brotherhood of Freedom, in The Angel of the Revolution (1893). The organisation finances a British inventor to create a fleet of super-airships, and when war breaks out between a Franco-Russian alliance and Britain and Germany, the terrorists come in on the side of Britain. With their fleet they defeat the Franco-Russian alliance and subjugate the rest of the world. Their purpose is to outlaw war and create world peace. A sequel, Olga Romanoff or, The Syren of the Skies (1894) is set a century later and follows attempts by descendents of the Russian nobility to regain power, with their plans aggravated by Earth under threat from a comet. Griffith’s view, which he explored further in The Outlaws of the Air (1895), was that whoever had domination of the skies would control the fate of the world.

The Angel of the Revolution: invasion literature 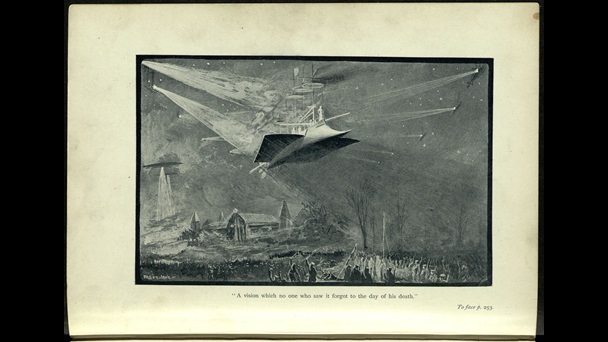 George Griffith’s The Angel of the Revolution (1893), tells the story of a group of revolutionaries who conquer the world using airship technology. It influenced HG Wells and foreshadowed the air battles of World War One.

It was left to H G Wells to develop the popularity of the invasion-threat novel by having the ultimate invader, the Martians, in The War of the Worlds (1898). Wells’s Martians are technologically superior to anything Earth can throw at them and show that, in the future, whoever is the most scientifically advanced will hold the upper hand in any combat. Wells has an ace up his sleeve, though, when the Martians fall victim to disease, the smallest microbe achieving what humanity failed to do.

The War of the Worlds from Pearson's Magazine 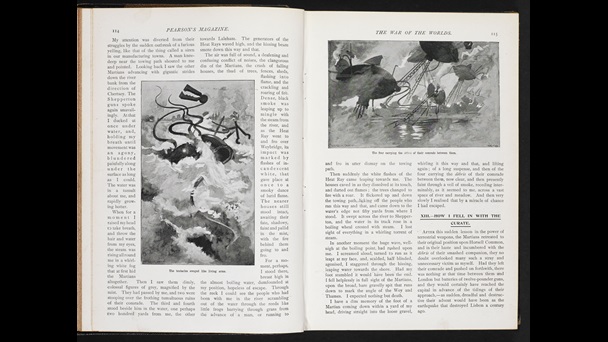 Warwick Goble’s illustrations for the first publication of The War of the Worlds in Pearson’s Magazine in 1897 reinforced the sense of the chaotic breakdown of communications and social cohesion in the book.