The figure of Bertha Mason

Carol Atherton explores the character of Bertha Mason in Jane Eyre through ideas of the ‘Other’, Charlotte Brontë’s narrative doubling and 19th-century attitudes towards madness and ethnicity.

Professor John Bowen explores the character of Bertha Mason in Jane Eyre, revealing the depths of her character and the context in which Charlotte Brontë created her. Filmed at the Brontë Parsonage, Haworth.

Before we actually find out about Bertha Mason’s existence, we are aware of her as an uneasy and even threatening presence. She is the source of the mysterious, mocking laugh that Jane hears as she stands on the battlements of Thornfield Hall, desperate for freedom from domestic routine: she is responsible for setting fire to Mr Rochester’s bed, attacking Mr Mason, and tearing Jane’s veil on the eve of her wedding. When we finally meet her, she is depicted in language that degrades and dehumanises: she is a ‘clothed hyena’, a ‘figure’, described using the neutral pronoun ‘it’ (ch. 26). Nevertheless, her plight – that of the ‘madwoman in the attic’, the character behind the title of Sandra Gilbert and Susan Gubar’s famous study of 19th-century women writers – means that she is an object of sympathy as well as of fear. 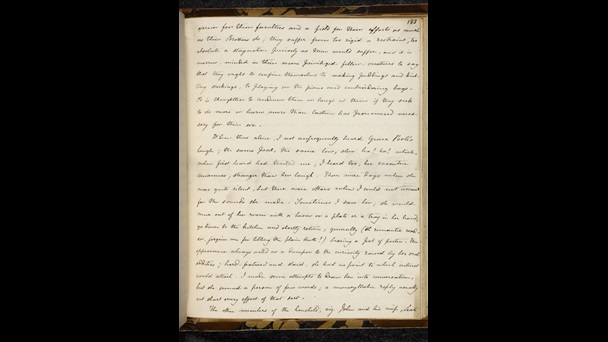 The narrative strategies used by Charlotte Brontë clearly designate Bertha as ‘Other’. She is the obstacle that stands in the way of Jane’s marriage to Rochester: she is surrounded by a web of Gothic imagery, described as a ‘goblin’ and a ‘vampire’ who threatens to ‘drain [Mason’s] heart’ (ch. 20). Yet critics have seen this ‘Othering’ of Bertha as highly problematic. One particularly troubling aspect of Bertha is her psychological instability. Rochester clearly sees her as responsible for her own situation. He tells Jane that Bertha ‘came of a mad family’, with a mother who was ‘a madwoman and a drunkard’, but also that, ‘like a dutiful child, she copied her parent in both points’ – implying a degree of choice (ch. 26). Brontë’s depiction of Bertha drew on contemporary descriptions of mental illness, such as those she found in the family’s medical encyclopaedia: this volume of Modern Domestic Medicine, which survives, is well-thumbed and clearly frequently consulted.

Opinions of the times

It would be easy to see Rochester’s lack of sympathy as representative of general attitudes towards mental illness in 19th-century society. However, as Mia Iwana has pointed out, these attitudes were changing. In a review of the 1844 report by the Metropolitan Commissioners on Lunacy, the Westminster Review reported that the ‘disposition of the public’ towards the mentally ill was becoming ‘more enlightened and benevolent’. The review promoted the idea that patients in mental asylums ought to be given ‘the benefit of a cheerful look-out on a pleasing prospect’, and that those responsible for their care should ‘avoid everything which might give to the patient the impression he is in prison’. Was Charlotte Brontë aware of these changes? If so, what might this suggest for our interpretation of Rochester?

Report on the treatment of mental illness in 1844 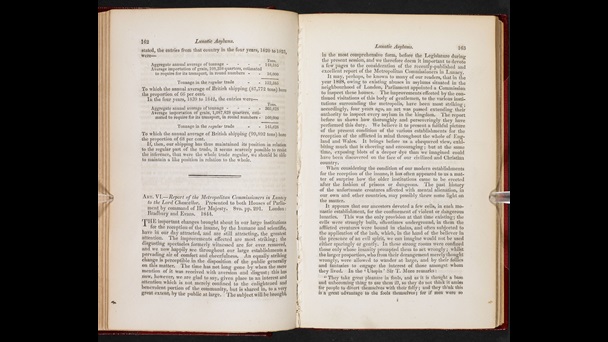 This Westminster Review article from 1844 reveals the emergence of 'more enlightened' attitudes towards the mentally ill.

Another source of complexity is Bertha’s ethnicity. She is a Creole, the daughter of a white European settler in the West Indies. Brontë leaves the precise nature of her ethnicity ambiguous, but references to her ‘dark’ hair and ‘discoloured’, ‘black’ face – plus the fact that her parents wanted her to marry Rochester because he was ‘of a good race’ – have led to speculation as to her racial identity, and the implications of this for Brontë’s portrayal of her as unstable, dangerous and threatening (chs. 25; 27). It is interesting to note that even as a white Creole, Bertha would have been seen as ‘alien’. In the 18th and 19th centuries, many European writers in the West Indies sought to associate Creoles with the native Caribbean population, as a way of distancing them from ‘civilised’ Europeans. This was particularly the case for Creole women, who were often depicted as self-willed, decadent and untrustworthy – the very essence of Rochester’s description of Bertha.

Perhaps the most problematic aspect of Bertha, however, is the fact that the other ‘bad animal’ in Jane Eyre is, of course, Jane herself. Bertha, in many ways Jane’s polar opposite, has been described by Gilbert and Gubar as Jane’s ‘truest and darkest double’. Her early appearances occur when Jane is troubled, tense or desperate for freedom (it is no coincidence that the wedding-veil that Bertha tears is one that Jane feels she has been ‘cheated’ into accepting). Her confinement in the attic mirrors Jane’s imprisonment in the Red Room at Gateshead, a punishment for her anger and lack of conformity. This doubling – a common Gothic motif – makes Bertha’s role within the novel much more complex, and means that any analysis of her character must take account of her relationship with Jane.

It is striking that Bertha is never allowed to speak for herself. In her 1966 novel Wide Sargasso Sea, Jean Rhys redresses the balance, writing a prequel to Jane Eyre that focuses on Bertha’s story and features Bertha – here renamed Antoinette Cosway – as one of its narrators. In Rhys’s novel, Rochester’s decision to call Antoinette ‘Bertha’ is just one of the acts of violence, both actual and metaphorical, that the character suffers. She is both the victim of oppression and a woman who (like Jane) has needs, dreams and desires: she is rejected by Rochester and treated as a ‘white cockroach’ by her family’s black servants. Rhys’s complex, fascinating novel, which explores themes of fragmentation and instability, is evidence of the fact that whatever Rochester might have wanted, Bertha simply will not stay hidden: nearly 200 years after her creation, she continues to disturb and intrigue.