In August 1819 dozens of peaceful protestors were killed and hundreds injured at what became known as the Peterloo Massacre. Ruth Mather examines the origins, response and aftermath of this key early 19th century political event.

On 16 August 1819, a meeting of peaceful campaigners for parliamentary reform was broken up by the Manchester Yeomanry, a local force of volunteer soldiers. Between 10 and 20 people were killed and hundreds more injured in what quickly became known as the Peterloo Massacre.

Although different sources give different estimates of both the numbers attending the meeting and the numbers killed and injured, it seems likely that around 100,000 people attended the meeting at St Peter’s Fields in Manchester on a sunny August day.[1] Men, women and children came not only from the local area but from towns and villages across the North West, some walking nearly 30 miles to attend. Although several members of the crowd attended from mere curiosity, most were supporters of parliamentary reform and had come especially to see the main speaker, Henry Hunt, known as ‘Orator’ Hunt because of his talent for public speaking.

Map of the Peterloo Massacre and portrait of Henry Hunt 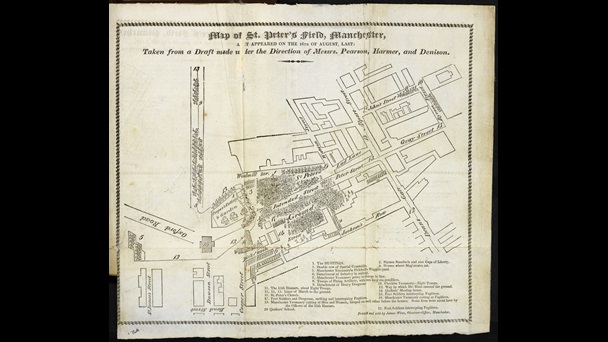 Map depicting the location and movements of protestors and soldiers at St Peter’s Fields, 1820. 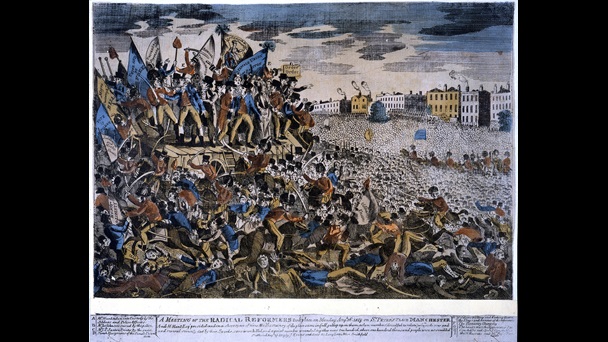 Why were people protesting?

Since the end of the Napoleonic wars in 1815, increasing numbers of working people in industrialising yet disenfranchised areas like Manchester had become involved in the movement for reform. Under the influence of men like Henry Hunt and the journalist William Cobbett, they began to campaign for universal suffrage. They argued that extending the vote to working men would lead to better use of public money, fairer taxes and an end to restrictions on trade which damaged industry and caused unemployment. Only a minority campaigned for women to have the vote, but women were nevertheless active in the movement. In 1819, women in and around Manchester had begun to form their own reform societies campaigning on behalf of their male relatives and vowing to bring up their children as good reformers. Many of the Female Reformers appeared at the meeting at St Peter’s Fields dressed distinctively in white as a symbol of their virtue. 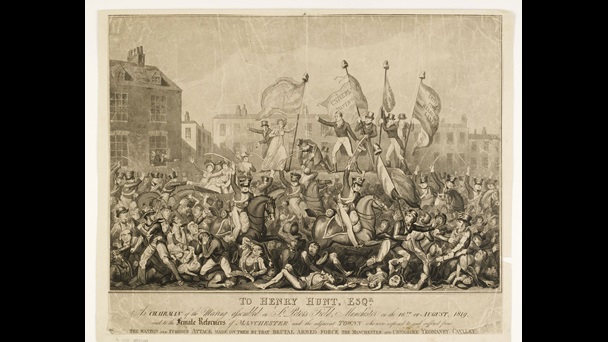 Print of the Peterloo Massacre depicting Female Reformers dressed in white and holding a banner for the Manchester Female Reform Union.

Despite the seriousness of the cause, there was a party atmosphere as groups of men, women and children, dressed in their best Sunday clothes, marched towards Manchester. The procession was accompanied by bands playing music and people dancing alongside. In many towns, the march was practised on local moors in the weeks before the meeting to ensure that everybody could arrive in an organised manner.

According to local magistrates, however, the crowd was not peaceful but had violent, revolutionary intentions. To them, the organised marching, banners and music were more like those of a military regiment, and the practices on local moors like those of an army drilling its recruits. They therefore planned to arrest Henry Hunt and the other speakers at the meeting, and decided to send in armed forces – the only way they felt they could safely get through the large crowd.

People who were already cramped, tired and hot panicked as the soldiers rode in, and several were crushed as they tried to escape. Soldiers deliberately slashed at both men and women, especially those who had banners. It was later found that their sabres had been sharpened just before the meeting, suggesting that the massacre had been premeditated.

The names of many of the hundreds injured were printed, along with details of their wounds, so that sympathisers could put money towards a charity to support them – remember there was no sickness benefit or free healthcare available at the time. These lists, however, probably underestimate the numbers killed and injured, as many people were afraid to admit they had been at the meeting and thereby risk further reprisals from the local authorities.

The response to the massacre

There was considerable public sympathy for the plight of the protesters. The Times newspaper printed a shocking account of the day, causing widespread outrage which briefly united advocates of a more limited reform with the radical supporters of universal suffrage. A huge petition with 20 pages of signatures was raised, stating the petitioners’ belief that, whatever their opinions on the cause of reform, the meeting on 16 August had been peaceful until the arrival of the soldiers.

From government came an official sanction of the magistrates’ and yeomanry’s actions, and the passing of the Six Acts, a paranoid legal crackdown on the freedoms of the public and press. Among this new legislation was the requirement for any public meeting on church or state matters of more than 50 people to obtain the permission of a sheriff or magistrate, and the toughening of the laws that punished authors of blasphemous or seditious material. Many braved the oppressive Six Acts, however, to express their anger in print. Percy Bysshe Shelley, on hearing news of the massacre while in Italy, called for an immediate response. His poem ‘The Masque of Anarchy’, encourages reformers to ‘Rise like lions after slumber, in unvanquishable number’ (stanza 38). He sent the poem to Leigh Hunt in London, who cautiously refrained from publishing it. The satirist William Hone had no such qualms. His Political House That Jack Built (1819), illustrated by caricaturist Cruikshank, neatly sums up the reformers’ grievances in his typically irreverent manner. The piece was wildly popular, reflecting both the extent of anger over Peterloo and the cleverness of using a well-known nursery rhyme to make a serious message widely accessible. Radical propaganda often veered between respectability and audacious humour, the latter, of course, being much harder to prosecute in court for fear of provoking hilarity.

Ironically, the attempt to silence government critics only encouraged journalists to develop inventive new ways of conveying the message of reform, while the outrage of conservative newspapers only inspired further satires.

As well as political prints and poems, everyday items such as cookware and handkerchiefs immortalised and commemorated Peterloo. Such items proclaimed the owner’s allegiance to the reform cause, and sustained the memories of its martyrs. 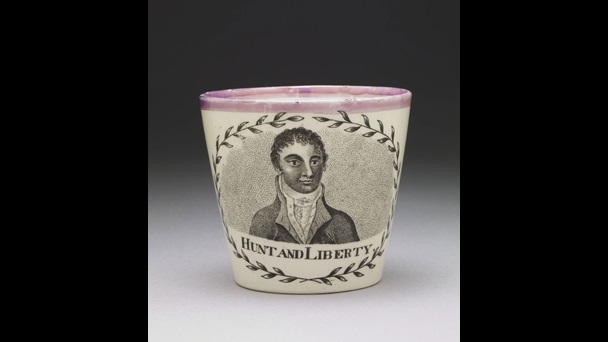 Beaker commemorating Henry Hunt, the radical speaker who was imprisoned for his involvement with the reform meeting at St Peter’s Field, 1819. 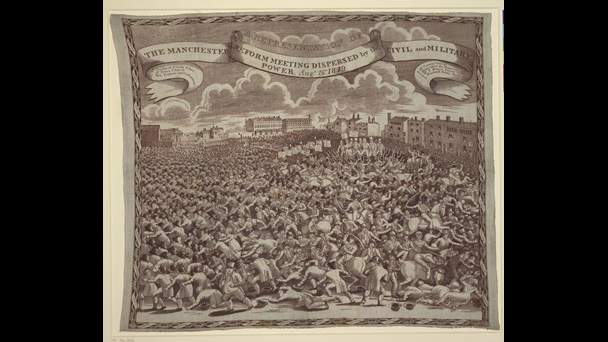 Handkerchief commemorating the Peterloo Massacre, 1819. It depicts the yeomanry slashing at the crowd of protestors.

Peterloo remains a key moment in the history of the suffrage movement, less for the initial success of the meeting than for the way it allowed the reformers to gain the moral high ground. It was increasingly obvious that the government could only counter dissent with repression, while the chorus of angry voices only rose following outrages such as Peterloo.

A Slap at Slop and the Bridge-Street Gang 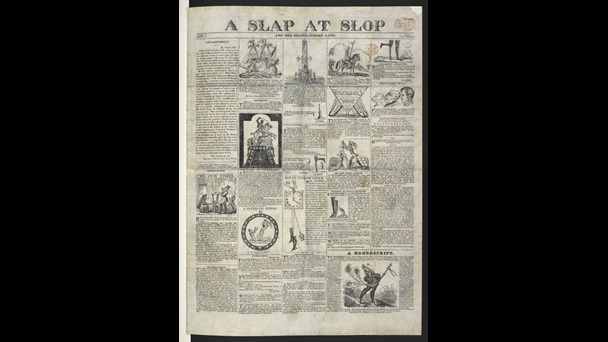 Satirical design for a monument and medal for the soldiers at Peterloo, from William Hone’s A Slap at Slop and the Bridge-Street Gang, 1821.

[1] Due to the large numbers assembled, and the varying motives for exaggerating or downplaying attendance, it is difficult to obtain an accurate estimate. Robert Poole and Joyce Marlowe, scholarly authorities on Peterloo, use the fairly low attendance figure of 60,000, a number also given by the contemporary spectator John Benjamin Smith in his memoirs. The Times reported 80,000 in attendance, while the Manchester Observer carefully worked out the possible numbers per square yard and concluded that 153,000 people were present. Henry Hunt gave the number as 180,000 – 200, 000 in his memoirs, while Richard Carlile, who was also on the hustings, gave the unusually high attendance figure of 300,000 people in Sherwin’s Political Register.