In Alice in Wonderland, Alice asks: ‘what is the use of a book … without pictures or conversation?’ Taking a close look at the illustrations, Rebecca Hutcheon explores how time and space are depicted in the dream-worlds of Lewis Carroll’s Alice books.

Alice’s Adventures in Wonderland and Through the Looking Glass are works of fantasy. But their dream-worlds are also constructed from details of Alice’s domestic environment. This is developed not only in Lewis Carroll’s text, but also in John Tenniel’s illustrations: his pictures, though fanciful and bizarre, are nonetheless a catalogue of Victorian social types, settings, furniture and dress. When Alice travels underground and through the looking-glass, her unconscious dreams are made up of symbols of Victorian middle-class Oxford.

Time in Wonderland is troubled and topsy-turvy. Characters rush around, a sense of haste predominates, and everything seems to happen ‘just in time’ or ‘suddenly’. The arrival of the White Rabbit, running late, starts Alice’s adventures.

Play adaptation of Alice in Wonderland 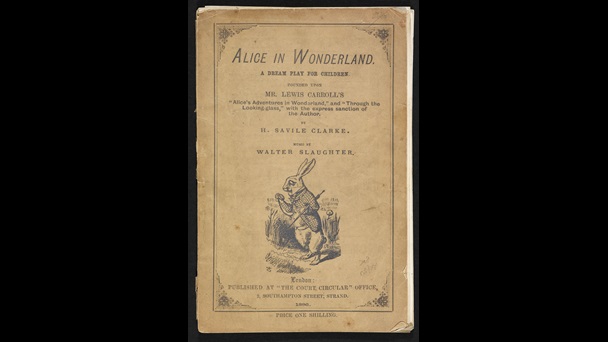 John Tenniel’s illustration of the White Rabbit on the cover of the play script of Henry Savile Clarke's adaptation.

Tenniel’s illustration of the White Rabbit, complete with a waistcoat, watch and cane, mixes human and animal features. The Rabbit’s fantastic nature comes about through the pocket watch: the human hand that holds it and the human eye that gapes at its time. And it is the watch, rather than the animal’s speech, that most surprises Alice: she didn’t ‘think it so very much out of the way to hear the Rabbit say to itself, “Oh dear! Oh dear! I shall be late!” (… at the time it all seemed quite natural); but when the Rabbit actually took a watch out of its waistcoat-pocket, and looked at it, and then hurried on, Alice started to her feet’.[1] These adult-like features – anxiety about lateness, the watch – are indicators of a time-obsessed society. By 1855, ten years before Wonderland was published, most clocks across Britain had adopted Greenwich Mean Time. This standardisation of the clocks was often termed ‘railway time’ since it was largely brought about by fixed timetables and a faster transport network. Time was no longer local, it was national and, increasingly, universal.

Alice’s ‘curiosity’ about the hurrying Rabbit is the first instance of the book’s obsession with time. As well as clock-time, the more individual or personal time of aging and developing is skewed in Wonderland. Alice can get bigger and smaller in an instant (though she cannot control by how much). As she ponders her sudden growth in size, she wonders: ‘shall I never get any older than I am now? That’ll be a comfort, one way – never to be an old woman’ (Wonderland, p. 40).

In the following chapter growing continues to loom large. The Caterpillar tells Alice to recite ‘You are old, Father William’. In Southey’s original, Father William claims he is ‘hale’ and ‘hearty’ due to the virtues and piety of his youth. This didactic message may reassure Alice’s fear of growing older, if only she could recall it, but she can’t. Instead, in Carroll’s rehashing, comes a riotous exaggeration in which the ‘comforts’ of old age are exaggerated to the absurd. Carroll’s retains the theme and form of the original (age discussed via an exchange between the old and young), but Father William is in many ways the opposite of Southey’s old man. His impulsive attitude shares Wonderland’s immediacy, valuing the now over the future. 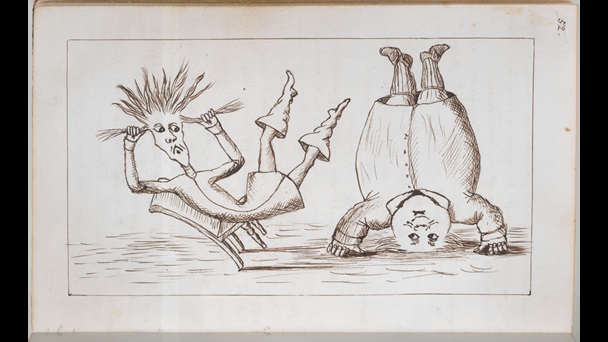 “You are old, father William," the young man said,
“And your hair is exceedingly white:
And yet you incessantly stand on your head –
Do you think, at your age, it is right?"

Carroll drew four pictures to accompany the poem in his original text, Alice’s Adventures Underground. Each picture corresponds to Father William’s main actions in the poem: the headstand, the somersault, the eating of the goose and the balancing of the eel. The first illustration, shown here, visualises Father William’s absurd athleticism. In all of Carroll’s four drawings, Father William appears on the right and the young man on the left – an arrangement that has significance for the characters. Father William, on the right, can be seen as always ahead of his time. The young man is always behind in space and time, and therefore always at a disadvantage. This is emphasised by the expression of astonishment and dismay on his face.

The first appearance of the watch might imply that, although time in Wonderland moves too quickly, it still moves logically forward. But when the watch reappears at the Mad Tea Party, the opposite is true: the Hatter’s watch, that tells the ‘days of the month, and doesn’t tell what o’clock it is’, has broken and is two days out (Wonderland, p. 74). Carroll suggests that time is uncontrollable and can’t be pinned down. So much so, in fact, that it can become an active character in the narrative. Personified Time, according to the Hatter, is whimsical and impulsive: ‘suppose it were nine o’clock in the morning, just time to begin lessons: you’d only have to whisper a hint to Time, and round goes the clock in a twinkling! Half-past one, time for dinner’ (Wonderland, p. 75). But it emerges that the Hatter and Time have fallen out so that, as the Hatter explains, ‘it’s always tea-time, and we’ve no time to wash the things between whiles’ (Wonderland, p. 77). 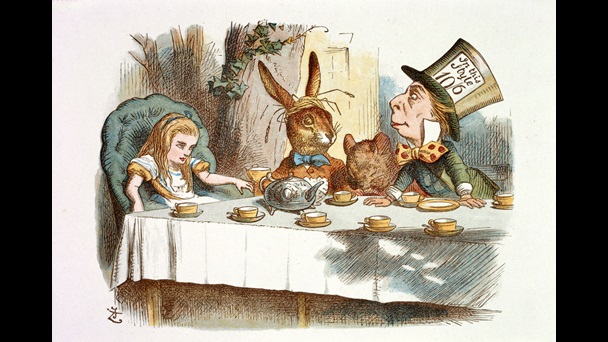 Taking tea is a ‘while’, or a pause. It was an important ritual in Victorian Britain and regarded as a mark of civilised society. But in Tenniel’s illustration, the Hatter has risen out of his chair, has his hands firmly on the table and leans over the tea things. The Hare, although clothed, has a crown of straw. Both are squashed up against the sleeping Dormouse. Dream-world tea, with its offers of non-existent wine, personal remarks, sleeping rodents and upset milk, is a caricature of dull reality. At the end of the book, when Alice’s sister says ‘run in to your tea; it’s getting late’, the normal routine returns and does away with ‘curious’ dream time (Wonderland, p. 130).

Where Wonderland begins outdoors in the warm month of May, Carroll’s sequel opens indoors in winter. The cold, snowy weather corresponds to the theme of mortality in the prefatory poem, ‘Child of the pure unclouded brow’. Overall, Looking-Glass has a less light-hearted setting than Wonderland. The garden, with its animated flowers, is a colder pastoral than Wonderland. The passage through the mirror leads to a world of Victorian Medievalism dominated by political battling: the competing Kings and Queens, the Lion and the Unicorn, the jousting Knights. Despite allusions to the modern political order and the settings of the train and the shop, the past haunts the looking-glass world. The melancholy White Knight is a caricature of heroic Pre-Raphaelite medievalism, and the famous ‘Jabberwocky’ poem is a parody of the medieval epic. The bulk of Alice’s journey is set against the back drop of a dark forest that is the legacy, in part, of Medieval Romance and German fairy tales. Here Alice meets a variety of familiar nursey rhyme characters: Tweedledee and Tweedledum, Humpty Dumpty, the Lion and the Unicorn. Where Wonderland is a place of depth (Alice falls down the rabbit hole) with 2D figures (playing cards), Looking-Glass world, accessed through a mirror and laid out like a chessboard, is decidedly flat. But it is still a dream world in which places suddenly turn into other places: mirrors can become ‘soft like gauze’, trains jump and boats melt into shops (Looking-Glass, p. 149).

When Alice finally gets high enough to see more of the looking-glass world, she realises what ‘a most curious country it was. There were a number of tiny little brooks running straight across it from side to side, and the ground between was divided up into squares by a number of little green hedges, that reached from brook to brook’. It is, as Tenniel’s illustration shows, ‘marked out just like a large chessboard! … a great huge game of chess that’s being played – all over the world’ (Looking-Glass, p. 172). Much like at the start of Wonderland, Alice tries to master her surroundings via the learned method of geography, aiming to begin a ‘grand survey of the country she was going to travel through’ (Looking-Glass, p. 177). Yet it soon becomes clear that in this ‘curious country’, without any principal rivers or towns, this kind of approach won’t work. The like-life trees and rocks in the foreground of Tenniel’s ‘Chess-board Landscape’ perfectly demonstrate the combination of fantasy and reality, or nature and artifice, in Looking-Glass world.

The rules of chess dominate the book. The characters’ actions, as animated chess pieces, correspond exactly with those of an actual game: Queens rush around whilst their husbands remain still, and the Knights fall off their horses, suggesting a knight’s move. Alice’s progress is made through a series of bafflingly abrupt and obligatory moves from place to place, movements that are apt for her role as a pawn. All Alice has to do to become Queen is to get to the eighth square. Yet Looking Glass chess, behind the mirror, is full of reversals. The Red Queen tells Alice: ‘it takes all the running you can do, to keep in the same place’. And Alice notices that, despite all this dashing, ‘the trees and other things round them never changed their places at all’. They have, she realises, been ‘under this tree the whole time’ (Looking-Glass, pp. 173–74). Nothing changes because the landscape is fixed to the Second Square of the Chess-board Landscape.

The game’s format, with its reflecting board and pieces, is tied to the book’s other main motif: the looking-glass. In a mirror, all objects ‘go the other way’, and there are many examples of reversals in the book. Alice must walk backwards to get to where she wants to go, while the White Queen lists the advantages of living backwards in time. There are also various doubled characters (like doubled pieces): the White and Red Knights, Kings and Queens, the King’s two messengers (one to come and one to go).

Two reflections that come not from chess, but from nursery rhymes, are Tweedledee and Tweedledum. The Tweedles are, according to Martin Gardner, ‘enantiomorphs’ or mirror images of each other.[2] They are not identical, but asymmetrical (like hands and feet). Tenniel’s picture shows the twins, standing in matching postures, wearing identical outfits. Only the names Dum and Dee, seen on their collars, tell them apart. The twins’ speech is also mirrored. Tweedledee’s favourite word, ‘contrariwise’, flips or, as in a mirror, inverts the conversation. Tweedledee usually addresses the other side of whatever Tweedledum has just said.

The Tweedles, then, are constantly repeating themselves – not just in words, or outfits, but also in action. As nursery rhyme characters, they are stuck in the same story, in the dark wood, forever repeating the battle over a rattle. Alice, the travelling pawn destined to be Queen, jumps from place to place. The illustrations, running as a series of bizarre images, capture the episodic nature of her journey. Like fantasy and science fiction novels that describe time-travel, time constantly shifts in Wonderland. The various depictions of time (late rabbits, ageing, a tea party existing out of time) don’t just challenge linear time, but the idea that time is predictable at all. Through the Looking-Glass, too, challenges the normal order of things by suggesting that underneath seemingly rigid rules and order (the chess game, predictable nursery rhyme endings), chaos is never too far away.

[1] Lewis Carroll, The Annotated Alice: Alice’s Adventures in Wonderland and Through the Looking-Glass and What Alice Found There, ed. by Martin Gardner (London: Penguin, 1964), p. 11.