Tom and Jerry's Life in London

The Gentle Author explores Pierce Egan’s 19th-century bestseller, Life in London, in which Tom and Jerry's 'rambles and Sprees through the Metropolis' offer readers a unique glimpse into both high and low urban culture.

This frontispiece was intended to illustrate the varieties of Life in London, from the king on his throne at the top of the column to the lowest members of society at the base. At the centre are the protagonists of the tale, Tom, Jerry and Logic, three men about town. Authored by Pierce Egan, their adventures proved best sellers in serial form and were collected into a book in 1820, remaining in print for the rest of the century, spawning no less than five stage versions, and delineating a social landscape that was to prove the territory for both the fictions of Charles Dickens and the commentaries of Henry Mayhew. 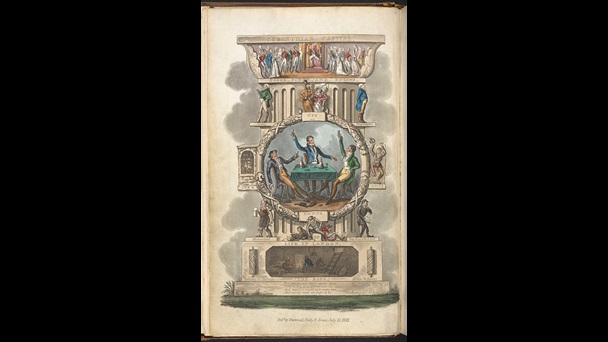 This frontispiece was intended to illustrate the varieties of 'Life in London', from the king on his throne at the top of the column to the lowest members of society at the base. 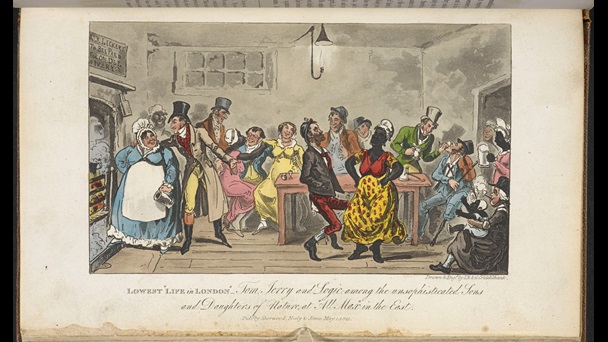 Describing this scene, Pierce Egan wrote: 'The group was motley indeed – Lascars, blacks, jack-tars, coal-heavers, dustmen, women of colour, old and young, and a sprinkling of the remnants of once fine girls, and all jigging together'.

Accounts of the urban poor and of life in the East of London are scarce before the 19th century, and what makes Life in London unique is that it portrays and contrasts the society of the rich and the poor in the metropolis at this time. And, although fictional in form, there is enough detail throughout to encourage the belief that this is an authentic social picture.

The characters of Tom, Jerry and Logic were loosely based upon the brothers who collaborated upon the illustrations, Isaac Richard and George Cruickshank, and the writer Pierce Egan, all relishing this opportunity to dramatise their own escapades for popular effect. Isaac Richard and George’s father had enjoyed a successful career as a political cartoonist in the seventeen-nineties and it was his sons’ work upon Life in London that brought the family name back into prominence in the 19th century, leading to George Cruikshank’s long term collaboration with Charles Dickens. 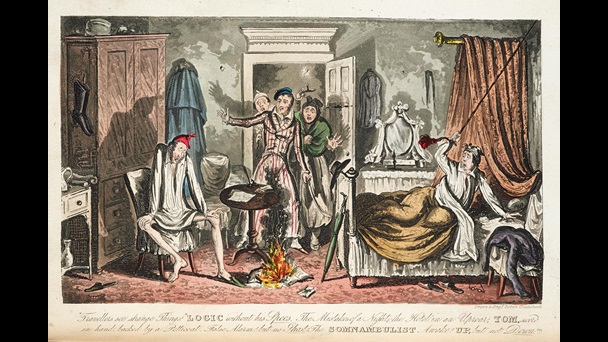 'Travellers see strange things! Logic without his Specs. The Mistakes of a Night; the Hotel in an Uproar; Tom sword in hand backed by a Petticoat. False Alarm! but no Ghosts The SOMNAMBULIST Awake UP, but not Down!!!', 1871. 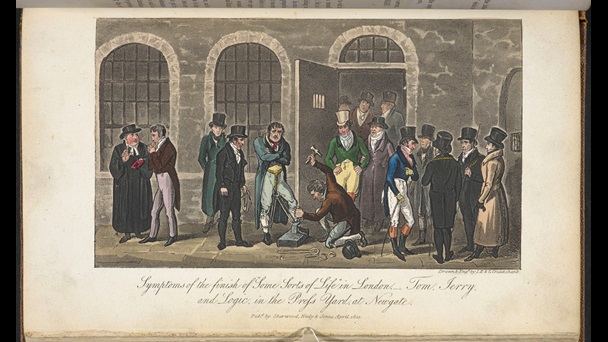 'Symptoms of the finish of 'Some Sorts of Life' in London - Tom, Jerry and Logic in the Prefs Yard at Newgate', 1823.

Jerry Hawthorn comes up from the country to enjoy a career of pleasure and fashion with Corinthian Tom, yet as well as savouring the conventional masquerades, exhibitions and society events, they visit boxing matches, cockpits, prisons and bars where the poor entertain themselves, with the intention to 'see a “bit of life”'. It is when they grow weary of fashionable society, that the idea arises to see a '“bit of Life” at the East End of the Town.' And at 'All Max,' an East End boozer, they discover a diverse crowd, or as Egan describes it, 'every cove that put in an appearance was quite welcome, colour or country considered no obstacle… The group was motley indeed – Lascars, blacks, jack-tars, coal-heavers, dustmen, women of colour, old and young, and a sprinkling of the remnants of once fine girls, and all jigging together.' In the Cruikshanks’ picture, Logic has Black Sall on one knee and Flashy Nance upon the other while Jerry pours gin into the fiddler and Tom carouses with Mrs Mace, the hostess, all revealing an unexpectedly casual multiracial society in which those of different social classes can apparently mix with ease. 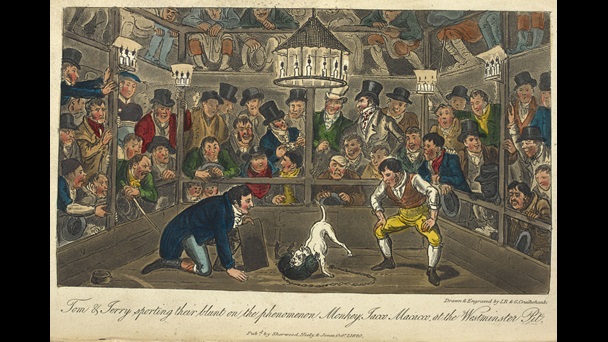 'Tom and Jerry sporting their blunt on the phenomenon Monkey Tacco Macacco at the Westminster Pit', 1823. 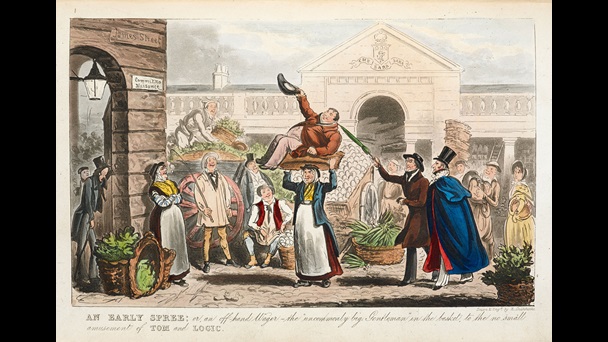 'AN EARLY SPREE: or an off-hand Wager - the 'uncommonly big Gentleman' in the basket, to the no small amusement of TOM and LOGIC', 1871.

Situated somewhere between the romps of Fielding, Smollet and Sterne and prefiguring Dickens’ catalogue of comic grotesques in Pickwick Papers, the humour of Life in London, spoke vividly to its time, yet appears merely curious two centuries later. By the end of the 19th century, the comedy had gone out of date, as Thackeray admitted even as he confessed a lingering affection for the work. 'As to the literary contents of the book, they have passed clean away…' he wrote, reserving his enthusiasm for the illustrations by the Cruikshank brothers – which you see below – declaring,'But the pictures! Oh! The pictures are noble still!' 'THE GRAND LOUNGE: Regent Street to wit TOM and his party off to the Races: JERRY bowing to KATE and SUE. LOGIC, inside the 'uncommonly big Gentleman' and the 'high bred One' waiting for a lift', 1871. 'How to FINISH a Night to be UP and dressed in the Morning: TOM awake - JERRY caught napping - LOGIC on the go - and the uncommonly big gentleman, abroad!', 1871.