Alice’s Adventures in Wonderland (1865) is one of the best-known, best-loved books in the world. It has been translated into most languages including Esperanto and Latin, adapted for stage, film and television multiple times, and illustrated by countless artists, from John Tenniel and Salvador Dali to illustrators in the Disney studio. Alice has also been turned into many game-related products including puzzle books, board games and sophisticated computer games such as American McGee’s Alice (2000), which follows Alice into a disturbed adulthood. There are so many Alices that the very personal nature of the character’s genesis is easily forgotten. 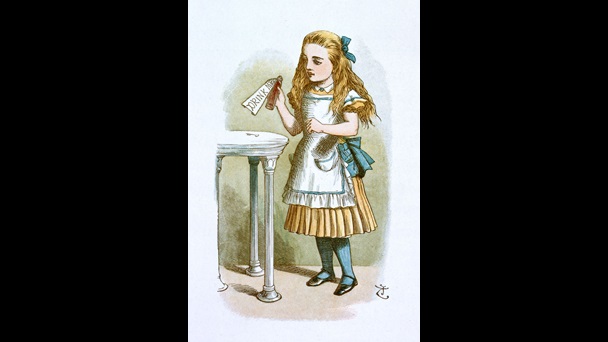 ‘Drink me’ Alice illustration by John Tenniel from The Nursery Alice, 1890.

Play adaptation of Alice in Wonderland 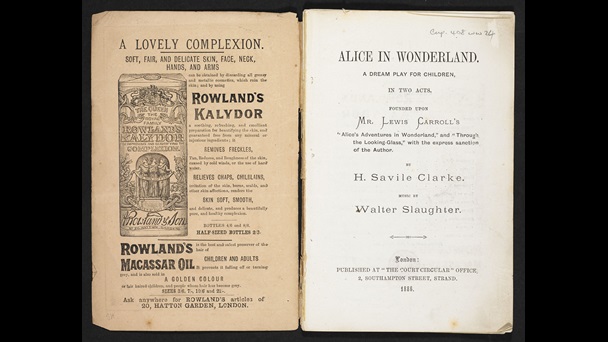 The story of how ‘Lewis Carroll’, the pen-name of Oxford don Charles Lutwidge Dodgson (1832-1898), created what he called his ‘fairy-tale of Alice’s adventures underground’ is immortalised in ‘All in the Golden Afternoon’, the poem that forms a preface to the book. The poem relates how Carroll’s young friend, Alice Liddell, and her two sisters demanded a story to pass the time when they were boating on the river Thames one summer’s afternoon.

Thus grew the tale of Wonderland:
Thus slowly, one by one,
Its quaint events were hammered out –
And now the tale is done.

Carroll turned the story into a handmade book for Alice Liddell, complete with illustrations he drew himself. Carroll’s drawings feature a dark-haired girl much more like Alice Liddell than Tenniel’s vision of Alice, and the book is full of references to the shared social and imaginative world Carroll and his young friend inhabited in and around Oxford. For instance, during the Mad Tea-Party the Dormouse tells a story about three little sisters, Elsie, Lacie, and Tillie, who live at the bottom of a treacle-well. As Martin Gardner points out in The Annotated Alice, the sisters’ names are coded references to the three Liddle (little) sisters: L.C. refers to Lorina Charlotte, Tillie is a corruption of Matilda, the family name for Edith, while Lacie is an anagram of Alice.[1] The Treacle Well refers to holy well associated with St. Frideswide, the patron saint of Oxford (‘treacle’ is an ancient term for a healing compound). Alice’s father, the Dean of Christ Church College where Charles Dodgson lived and taught mathematics, had recently commissioned a window in the saint’s honour for the college chapel. No doubt the Liddell sisters shared the fictional Alice’s perplexity at the idea of a well filled with treacle. 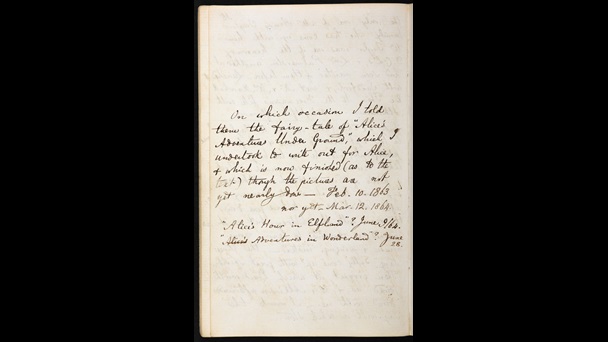 Page from Charles Dodgson’s diary, containing a note on the origins of the Alice story. The note has been added opposite the original diary entry for 4 July 1862 which records the boating trip with the three Liddell sisters.

As the Dormouse’s tale illustrates, much of the personal content of the story is disguised through the use of puzzles, riddles, puns, and what appears to be nonsense. Such devices have a long history in childhood culture: they are found, for instance, in the nursery rhymes, skipping games and folk tales that made up chapbooks and some of the earliest picture books for children. In Alice’s Adventures in Wonderland, however, the quality of the word-games and puzzles is of an extremely high order.

Charles Dodgson was fascinated by all kinds of puzzles and word-play, and he encouraged his young friends to share this interest through personalised games and puzzles: invitations, for instance, would be issued using rebuses and codes that contained information about date, time, and place. Alice’s Adventures in Wonderland is in many ways a compendium of puzzles and games linked by a narrative (its 1871 sequel, Through the Looking-Glass and What Alice Found There, is in fact based on a game of chess), and puzzles provide a useful way for thinking about the two sides of the author of the Alice books. It is easy to assume that Charles Dodgson fascination with the kind of logic behind puzzles was closely related to his professional life as a mathematician. Thinking again about the personal nature of Alice and Dodgson’s propensity to conceal insider references behind disguises however, suggests other reasons why he would have been attracted to creating puzzles. For instance, the shy, stammering, slender don was far from the ideal figure of Victorian masculinity, and he was known for preferring the company of young girls to that of his peers. Although today Dodgson’s attraction to young girls can be seen as disturbing, he is one of a number of well-known Victorian and Edwardian men who found the company of girl children preferable to that of adults of either sex. It is not necessarily the case that such men were sexually interested in their child friends; arguably they liked their company because girlhood was entirely free from the demands associated with being a man in a patriarchal culture. From this perspective, the puzzles, nonsense and fantasy that make up Alice’s Adventures in Wonderland books can be seen as creative outlets for simultaneously expressing and concealing anxiety about adult masculinity – and another way in which it is a deeply personal book despite its high public profile.

Lewis Carroll's The Game of Logic 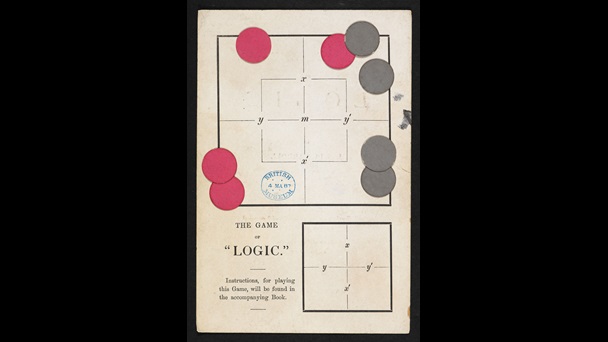 Lewis Carroll published several books for children’s about logic and mathematics, such as The Game of Logic, complete with board and counters, 1887.

Puzzle-disguises and the fantasy setting also make it possible to incorporate thoughts and show characters behaving in ways which normally would be unacceptable for an Oxford don under holy orders (this was compulsory for Dodgson’s position) or a well-brought-up Victorian girl. For example, when Alice finds the cake and bottle labelled ‘eat me’ and ‘drink me’ it is difficult not to hear echoes of the Eucharist, but their effects on her are far from those associated with Christian theology. As discussed below, there is nothing transcendental about the changes to Alice’s body in Wonderland, and this is not the only instance when Carroll takes a sideways look at religion. Social conventions too are challenged. Where well-behaved children were expected to be seen but not heard, Alice insists on having a voice. She asks questions that often show adult behaviour to be irrational, contradictory, and unjust; especially when it comes to the exercise of power and authority as in the trial of the Knave of Hearts. Most radical of all, Alice regularly corrects the characters she meets, all of whom are older than she (there are no other children in Wonderland), and she loses her temper with several of them. Although in Victorian society Alice’s behaviour would have been seen as unseemly and punishable, in Carroll’s story her frustration becomes a source of power and liberation. She refuses to continue her attempts to follow the rules, and dismisses the proceedings as ridiculous and the entire court as ‘nothing but a pack of cards’ (ch. 12). This view of childhood as intrinsically honest is another clue into why Charles Dodgson found the company of children attractive.

Dodgson’s familiarity with how children speak, think and play infuses Alice’s Adventures in Wonderland, but nowhere more so than in the changes that occur to Alice’s body. One of the great sources of frustration for children is the way they are defined and redefined by their size and age in ways that constrain them. One minute they are too big to sit on a lap; the next they are too little to stay up late. They are frequently enjoined to ‘act their age’, then accused of ‘behaving like a child’. Carroll captures the arbitrary and confusing nature surrounding adult expectations of children by making Alice’s body change rapidly in ways that disempower her. Children’s confusion about their bodies does not only stem from adults, however. Children’s bodies do change rapidly and sometimes feel alien and grotesque. Again, Dodgson’s close relationships with children is evident in the way he captures the sense of being alarmed or confused by a changing body, as when Alice’s neck becomes as long as a serpent and she loses touch with her feet, or she grows too large to fit in the White Rabbit’s house. Ultimately, however, the story is reassuring since Alice learns how to control her size by eating from the two sides of the mushroom. 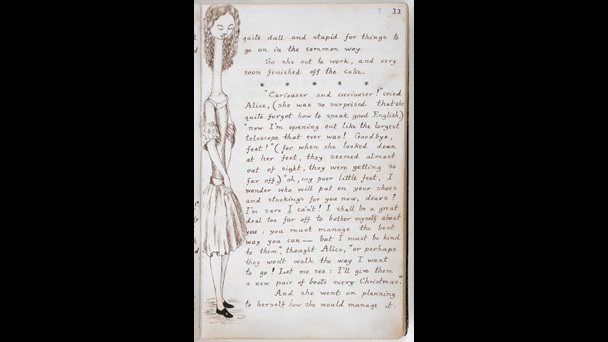 Illustration of Alice growing taller by Lewis Carroll, from the original ‘Alice’s Adventures Under Ground’ manuscript, 1862–64.

Dodgson’s delight in childhood games and stories was life-long and another way in which personal experience infuses Alice’s Adventures in Wonderland. As a boy he entertained his 10 siblings by telling stories, writing poems, inventing games, and honing his skills of parody. The poem ‘Jabberwocky’, for instance, was originally a spoof piece of Anglo-Saxon poetry in the magazine he produced for his family. His knowledge of children’s literature was as great as his knowledge of games and puzzles as can be seen from the many ways in which he reworks familiar literary forms in Alice. Often the impetus is to play with the kind of earnest, didactic texts children were required to commit to memory, as when he turns Isaac Watts’s ‘How doth the Little Busy Bee’ from ‘Against Idleness and Mischief’ (Divine Songs, 1715) into ‘How doth the little crocodile’. In this case a verse about the virtues of being industrious is transformed into one that appears to point to the satisfactions of vanity, indulgence and deception. However, Carroll also employs devices that have pleased children for centuries: animals who talk, wear clothing, and carry watches, for instance. Perhaps most important of all, Lewis Carroll recognised the potential of telling stories through words and pictures; indeed, the first question Alice poses is ‘what is the use of a book … without pictures or conversations?’ (ch. 1). Carroll paid as much attention to the pictures as the words in Alice; often to the irritation of his illustrator. Many jokes and even more references to people, places, topical debates, and objects from his personal life are conveyed through images, including himself as the Dodo. His understanding of the attractions of images and the support they give to young readers is particularly apparent in The Nursery Alice (1890), for which Carroll required larger, coloured versions of Tenniel’s illustrations.

From its intimate origins Alice’s Adventures Underground has become a global phenomenon: a book created for one Victorian child in Oxford has become a book for all ages and people everywhere. It looks back to the earliest forms of storytelling and writing, and yet its episodic structure and alternative worlds have inspired the most advanced computer games of the 21st century. And the process continues. Curiouser and curiouser.