Judith Flanders describes how many of our own Christmas traditions – from trees and crackers to cards and carols – have their origins in 19th-century industrial and commercial interests. 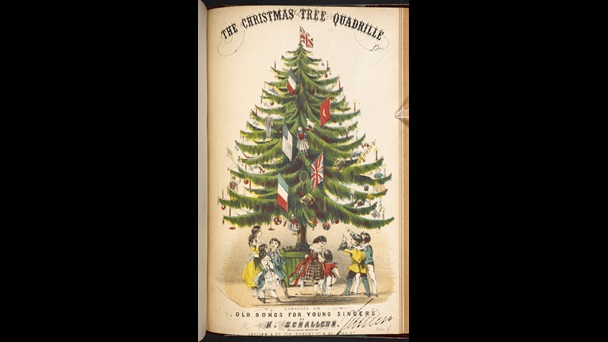 Should one want to find the ultimate Christmas celebration, the oldest traditions, the most cherished customs, surely Charles Dickens is the author to turn to. The problem is that, during Dickens’s lifetime, many of these traditions were barely traditions at all. The ‘traditional’ British Christmas we know today is not found in the mists of history, but developed as a product of industrialisation. 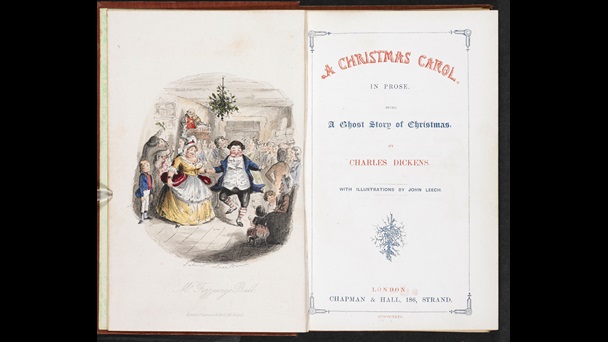 Charles Dickens's A Christmas Carol (1843) was a phenomenal success in the 19th century and is still closely associated with the author.

That is not to say that Christmas celebrations did not exist before the 19th century, nor even that the holiday was not one of consumption. It is simply that, until industrialization and the mass market, what was consumed was, for the most part, food and drink. Holiday eating and drinking had been the major component of Christmas celebrations almost from the start . It was in the 4th century that 25 December was proclaimed, by the Bishop of Rome, to be the day of Christ’s nativity. But less than three decades later, the Archbishop of Constantinople found it necessary to warn his flock against the ‘feasting to excess’ the day engendered.

And so it continued down the centuries. In a story written in 1837, Dickens ticked off the essentials: the day was about family, about mistletoe and holly, church-going and charity, and about food – turkey, plum pudding and mince-pies. Yet so many things we take for granted were not yet part of the holiday. He did not mention trees, carols, cards, stockings or crackers. There was no Father Christmas, nor were there presents (apart from those given to the servants, and tokens to the children). Dickens was on the cusp of the great changes that were coming, and when he began to write, many of the ‘traditions’ for this ‘traditional’ festival were evolving, and new ‘traditions’ were being created.[1]

'A Christmas Dinner', from Charles Dickens's Sketches by Boz 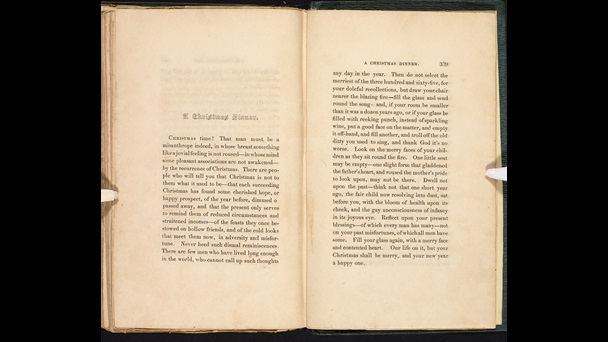 ‘A Christmas Dinner’ from Sketches by Boz by Charles Dickens, 1836.

In the 16th century, listeners were encouraged to ‘Deck the Halls with Boughs of Holly’, or at least they were in Wales, where that carol originated. By the 18th century more generally, holiday greenery was so common that it was frequently simply called ‘Christmas’: ‘Windows were stuck with Christmas’ reported one newspaper in 1706 in an article on the season.

In the south and west of England, kissing boughs were frequently seen: measuring up to a meter and a half, they were crossed hoops of greenery decorated with apples and oranges, coloured ribbons and paper flowers – precisely the kind of decorations that later would be hung on that novelty of the 19th century, the Christmas tree.

By the late 18th and early 19th century, those who lived around communities of German immigrants (including at Windsor, with German-born Queen Charlotte), knew of the custom of decorated trees indoors, ‘according to the German fashion’.[2] Queen Victoria and her German husband, Albert, had one for the first time in 1840, and in 1848 an illustration of their family around a tree popularized this German tradition, making it seem British. 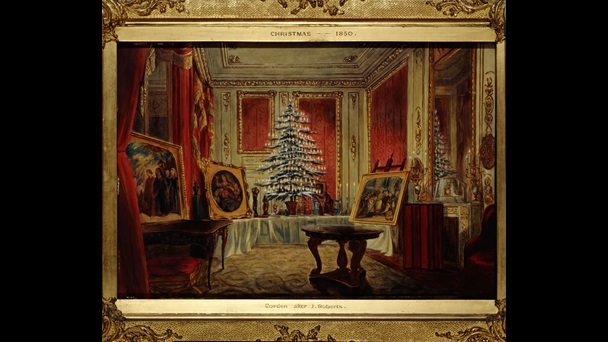 The tradition of the Christmas tree in England is typically credited to Prince Albert, as paintings like this were used by the press to reveal details of the royal Christmas.

'Christmas Tree at Windsor Castle', from the Christmas Supplement to the Illustrated London News 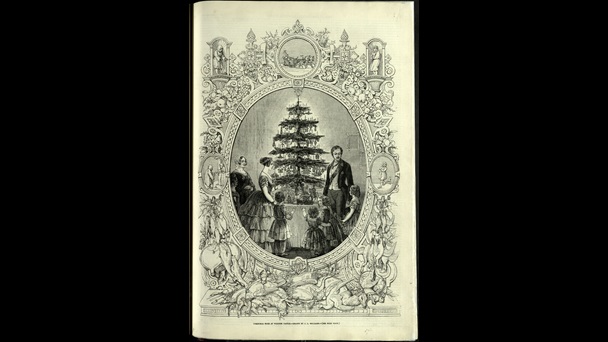 This illustration of Queen Victoria, Prince Albert and their family celebrating Christmas around a spruce fir helped to popularise the tradition.

We know that seasonal songs were sung as early as the 13th century, but in Britain carols had faded away with the Puritan rejection of Christmas. When they revived, they were generally about feasting, not religion. (Two of the first religious carols that postdate the Puritans were ‘While Shepherds Watched their Flocks’ (1698) and ‘Hark the Herald’ (1782)).

Broadside on 'Carols for Christmas Holidays' 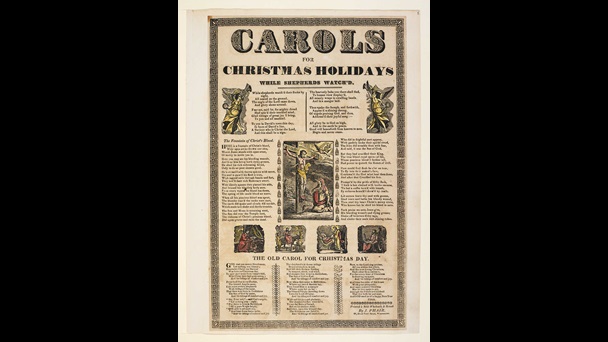 Yet just six years after his first Christmas story, which made no mention of them, Dickens’s most famous story was entitled A Christmas Carol (1843). Carols were now being reintroduced to the middle classes by anthologies written by antiquarians who collected them – that is, they transcribed the songs of the working classes, repackaging them commercially for the middle classes.

It was another decade before carol-singing became widespread, however, because two other things were necessary: families needed to be together, and there had to be a way to play the music. For the former, the new railways made it possible for workers, and children away at school, to travel home for the holiday. But it was not until the 1870s, when paid holidays were established for the first time, that working people could take full advantage. And by then, advertising and instalment plans were making pianos accessible to the middle classes for the first time.

A Good Christmas Box, a collection of carols For those who could not travel home, another new tradition was the Christmas card. Until 1840, letters were paid for by the recipients, not the senders, and they were charged by the mile. The Penny Post moved the cost to the sender, and brought in a flat charge of one penny, a tenth or less than earlier prices. Just three years later, Henry Cole, eminent civil servant, inventor and a prime mover in the new postal-system, had a thousand cards printed showing a family Christmas dinner. But at one shilling each, there was no great demand. Only in the 1880s, when printing technology improved and prices dropped, did Christmas cards become a standard part of the season.

Reproduction of the first Christmas card A reproduction of the first Christmas card ever sent, designed by John Callcott Horsley for Henry Cole in 1843.

Father Christmas had arrived too by then. The Reformation had seen saints’ days gradually disappear, St Nicholas included. Instead, Old Christmas, usually drawn as a thin old man, was invented as a spirit of the season. The Dutch Sint Nicolaas, or Sinterklaas, travelled to the USA and became Santa Claus. His business day was moved, too, to Christmas Eve instead of 5 December (St Nicholas’s day); by the 1820s he had his sleigh and reindeer, by 1870 he customarily wore a bishop’s red robes; and by the late 1880s he melded with Old Christmas in Britain, to become Father Christmas, part of the home-based, domestic holiday, and a symbol of giving.

Hervey's The Book of Christmas Illustration from 1874 showing the evolution of the ‘Father Christmas’ figure: no longer thin, he wears red robes and boots.

Plum porridge, a beef broth thickened with bread and flavoured with dried fruit, wine and spices, had long been a seasonal food, while Twelfth Night cakes, served on the evening before Epiphany, to mark the end of the holiday cycle, were also traditional, with a hidden dried bean and pea baked into them: whoever found these became King and Queen of Twelfth Night. Both these foods were gradually transformed into Christmas fare: plum pudding and Christmas cake. Meanwhile the railways had altered the main course of the meal, which had traditionally been beef for those who could afford it. Turkeys had first been brought to Europe by the Spanish in the 16th century, but before steam they were not a holiday staple. Before the railways with their speedy transport, animals had been herded to market alive. Turkeys, however, were poor walkers: their feet were tender, and they needed to be fitted with little leather boots to protect them on the march. Even so, a second fattening-up period once they arrived was still necessary, which made them a luxury commodity. With the arrival of trains, the price of turkeys dropped, and their large size made them perfect for equally large Victorian families.

In 1847 a confectioner, to set his product apart from others’, covered his sweets in paper wrappings that had been treated with chemicals so that they made a small explosion when they were unwrapped. He called them ‘fire-cracker sweets’, and they were a success. Soon the sweets were replaced with paper hats and trinkets, and the Christmas cracker was born. Other businesses saw similar opportunities. To draw shoppers, Liverpool’s biggest department store created a snow-filled ‘Christmas Fairyland’ in the 1870s; 10 years later, a Stratford shop hosted the first appearance of a department-store Santa.

And so the traditional, domestic British Christmas was really novel, commercial and international: Germany supplied the trees, the USA Santa Claus and mass advertising, the Dutch Santa Claus’s name, and shoes for the presents (even though, in the US translation, the shoes had turned into stockings). Christmas was produced by manufacturers, delivered by railways, advertised by newspapers and magazines. Christmas presents, Christmas travel, Christmas pantomimes, Christmas concerts, Christmas dinners: all had been reshaped, reordered, repackaged and delivered, to create an image not of the modern age, but the age of domesticity. When Augustus Henry Glossop Harris reopened the Theatre Royal, Drury Lane in 1879 he embarked on a series of spectacular shows, melodramas and elaborate Christmas pantomimes. Dick Whittington was the pantomime for the 1894/95 season, with Ada Blanche as Dick.

For whatever writers like Dickens said about the traditional Christmas at home, in reality, Christmas was always a commercial proposition. Christmas games and pastimes were promoted and marketed by magazines; Christmas music was the product of commercial enterprises selling sheet-music; food was processed and transported by new industrial processes; presents at Christmas were a novelty promoted by retailers. [1] Charles Dickens, ‘Christmas festivities’ in Bell’s Life in London, 1835; republished as ‘A Christmas dinner’ in Sketches by Boz, 1836.

[2] Charlotte Papendiek in Court and Private Life in the Time of Queen Charlotte, being the Journals of Mrs Papendiek (1789).