Walking the landscape of Wuthering Heights

Situating Emily Brontë in her hometown of Haworth – a small Yorkshire mill town surrounded by moors – Professor John Bowen reflects on the representation of landscape in Wuthering Heights.

Emily Brontë lived not in a mythical moorland fastness but in a rapidly industrialising world. Her home, Haworth Parsonage, looked down on a small Yorkshire mill town and backed onto the moors. The bleakly beautiful West Yorkshire moors have often helped to define in important ways how readers and critics have interpreted Wuthering Heights – as a strange and wild book about a remote and unfamiliar landscape. Yet it is important to remember that Haworth was a modern working town, with several mills and a good deal of industrial unrest. Although it might have seemed distant from London, it was not so far from Manchester (the ‘shock city of the age’) and the bustling metropolis of Leeds. It was part of a world in rapid motion that witnessed the dramatic mid-Victorian transformation of nature and work in both town and country, changes powered by the railways (for which Branwell Brontë worked) and by the mills that surrounded them.

Photographs by Fay Godwin of Howarth Parsonage, home of the Brontës, and Top Withens 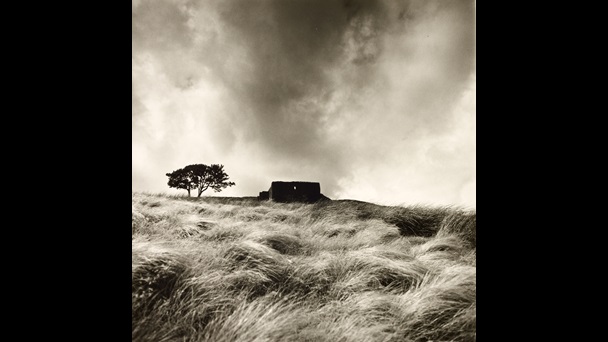 Top Withens, the ruined farmhouse believed to have influenced Wuthering Heights, photographed in the 20th century by Fay Godwin.

But this was not simply a change of landscape. As Terry Eagleton writes:

It was not just a question of cotton mills, rural enclosures, hunger and class-struggle, but of the crystallising of a whole new sensibility, one appropriate to an England which was becoming for the first time a largely urban society. It was a matter of learning new disciplines and habits of feeling, new rhythms of time and organisation of space, new forms of repression, deference and self-fashioning. A whole new mode of human subjectivity was in the making … both aspiring and frustrated, rootless and solitary yet resourceful and self-reliant.[1]

This new world, and the landscapes and townscapes it brought with it were decisive presences in Emily and her sisters’ lives and writing.

Sanitary report on Haworth, home to the Brontës 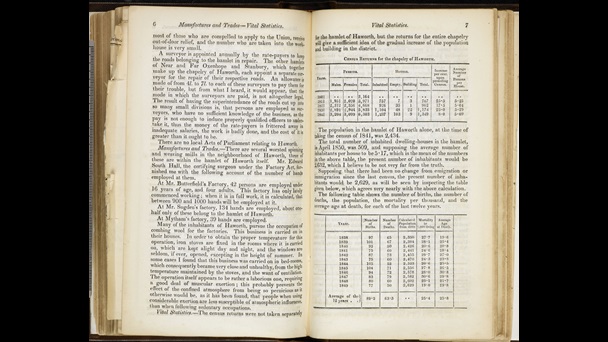 The moors mattered too, of course, particularly to Emily, who was fascinated by their austere beauty and by the destructive and consoling powers of the natural world that they embodied. An early essay by her saw nature as essentially destructive and indifferent to human purposes and needs: ‘All creation is equally mad... Nature is an inexplicable problem; it exists on a principle of destruction. Every being must be the tireless instrument of death to others, or itself must cease to live, yet nonetheless we celebrate the day of our birth, and we praise God for having entered such a world.’[2] Wuthering Heights has at its heart these contradictory qualities and constantly binds together the deadly and regenerative qualities of nature: even the level-headed Nelly Dean is ‘seldom otherwise than happy while watching in the chamber of death’ (ch. 15).

The landscape of Wuthering Heights is very different from the ‘carefully-fenced, highly cultivated garden, with neat borders and delicate flowers’ that Charlotte Brontë criticised Jane Austen’s fiction for depicting. Nature is often deeply inhospitable in the book, not easily subdued to human purpose, comfort or design. Landscape is thus never simply a setting or something to be contemplated in Brontë’s work, but an active and shaping presence in the lives of its characters. Lockwood has to learn to find his way to and from the Heights before he can begin to understand the extraordinary story that he is about to be told.

So when thinking about Wuthering Heights, we should not see it as a novel that simply depicts or belongs to the moors. The final stanza of one of the Brontës’ most celebrated poems (we do not know if it was written Emily or Charlotte) begins ‘I’ll walk where my own nature will be leading’. It is concerned with both an essential human ‘nature’ and an absolute freedom that goes beyond any particular place or time. The speaker’s deep sense of embodiedness and place is seamed with the hope of radical freedom. At the very end of Wuthering Heights, a little shepherd boy who is ‘crying terribly’ tells Nelly that he has seen the dead Heathcliff and Cathy ‘walk’ on the moors (ch. 34). It confirms how they remain simultaneously deeply identified with the landscape and sinister and alien presences within it. Their own deep sense of belonging to the moors is a source of terror and estrangement for others. Belonging is the way not to belong. 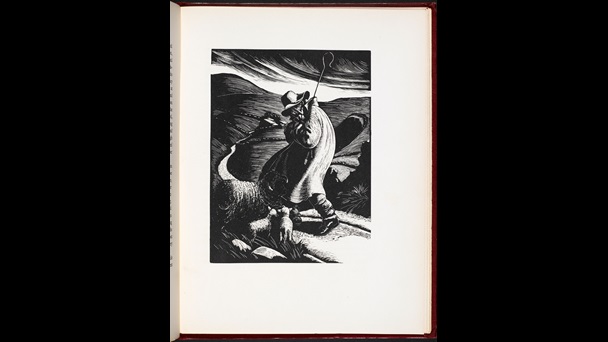 Clare Leighton's 20th century illustration of the shepherd who sees the ghosts of Cathy and Heathcliff 'walking' on the moors.