Heathcliff is one of the greatest enigmas in all of English literature. When we ask what seems a simple question of Wuthering Heights – why, for example, is Heathcliff so appallingly vengeful to those such as Hareton Earnshaw who have done him no harm? – we can find explanations in the terrible misfortunes of his life: he is an orphan; he is brutalised by Hindley; he is relegated to the status of a servant; Catherine marries Edgar. But the novel matches these kinds of social or psychological explanations by quite other ones: by the suggestion (as Charlotte believed) that he may be diabolical, a vampire or a ghoul. The novel gives us both kinds of understanding together; neither is allowed to trump the other. The passionate intensities of Wuthering Heights create a world of revenge without law or justice, in which Heathcliff is the dominant, overbearing presence, both outsider and insider, starving orphan and cruel landlord. Like the book itself, he is both remarkably self-disciplined and completely wild. What is most remarkable in Brontë’s description of him is the combination of two apparently contradictory qualities; on the one hand a reckless and passionate intensity that is indifferent to the feelings of others; on the other, an ability rationally to plan and sustain his vengeance over decades. Like a great novelist, Heathcliff is a brilliant great constructor of plots involving other people, which bring them (and us) into the presence of the most raw and deep emotions. This is why we can never be sure about Heathcliff. 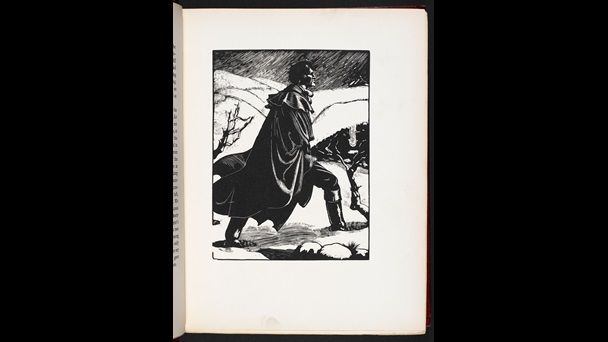 A brooding portrait of Heathcliff by Clare Leighton, 1931.

Heathcliff‘s origins are deeply mysterious: we know that he is picked up on the streets of Liverpool by Mr Earnshaw but little else for certain. Liverpool was both a major port for Ireland (where the Brontë family originated and which suffered a terrible famine in the 1840s, the decade the novel was published) and of the slave trade. But the way that Emily chose to write the novel with interlocking and inset narrators means that we can never be certain about Heathcliff: the story of his vengeful and disastrous marriage, for example, is told by his estranged wife Isabella to Nelly Dean, the housekeeper, who then tells Mr Lockwood, the southern intruder, who in turn tells us. Like Nelly, we never learn ‘where he was born, and who were his parents, and how he got his money’ (ch. 4). Nor is it ever clear what our feelings should be. He is described in many different ways by the characters of the book: old Mr Earnshaw calls him both ‘a gift of God’ and ‘dark almost as if it came from the devil’; Mrs Earnshaw rejects him as a ‘gypsy brat’ (ch. 4); Mr Linton thinks he is ‘little Lascar, or an American or Spanish castaway’ (ch. 5); Nelly both consoles him with the thought that his father might be ‘the Emperor of China and your mother an Indian queen’ and asks if he is a ‘ghoul or vampire’ (chs. 7; 34). Our response to Heathcliff, like that of the characters of the novel, is constantly in motion.

‘A sentiment fierce and inhuman’

In 1850, after her sister’s death, Charlotte Brontë wrote a preface to the novel in which she describes Heathcliff as ‘unredeemed; never once swerving in his arrow-straight course to perdition’, someone who only once shows human feeling, in his treatment of Hareton Earnshaw. His love for Catherine, writes Charlotte, is ‘a sentiment fierce and inhuman: a passion such as might boil and glow in the bad essence of some evil genius; a fire that might form the tormented centre--the ever-suffering soul of a magnate of the infernal world.’ Apart from his regard for Hareton, he is like ‘a man's shape animated by demon life - a Ghoul - an Afreet.’ This is too simple a view but it shows how violently disturbing a figure Heathcliff is, how he seems hardly to belong to the human world at all. 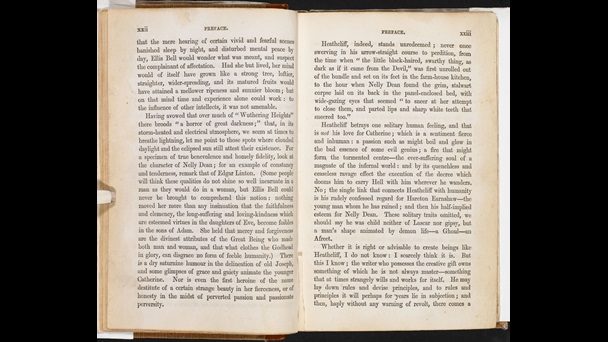 Review of Wuthering Heights from The Examiner 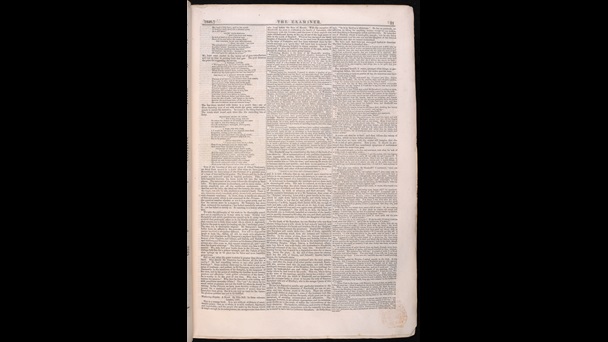 In this 1848 review of Wuthering Heights from The Examiner newspaper the critic views Heathcliff as a shocking, disturbing character.