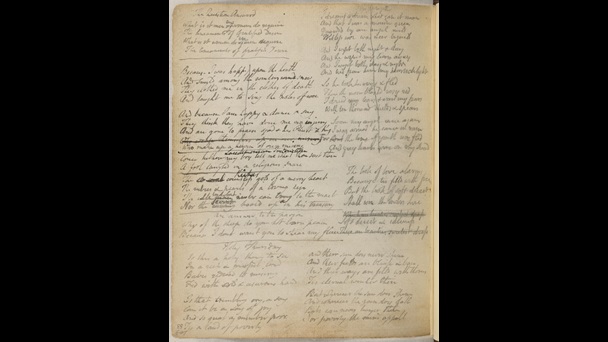 William Blake’s notebook draft of ‘The Chimney Sweeper’ for Songs of Experience.

The wretched figure of the child sweep is a key emblem in Blake’s poems of social protest. Not only are the sweeps innocent victims of the cruellest exploitation but they are associated with the smoke of industrialisation, thus uniting two central Romantic preoccupations: childhood; and the impact of the Industrial Revolution on the natural world. A report to a parliamentary committee on the employment of child sweeps in 1817 noted that ‘the climbing boys’ as young as four were sold by their parents to master-sweeps, or recruited from workhouses. As the average size of a London chimney was only seven inches square, to encourage the sweeps to climb more quickly, pins were ‘forced into their feet’ by the boy climbing behind; lighted straw was applied for the same purpose. ‘Easy prey to those whose occupation is to delude the ignorant and entrap the unwary’, a sweep might be shut up in a flue for six hours and expected to carry bags of soot weighing up to 30lbs. Many suffered ‘deformity of the spine, legs and arms’ or contracted testicular cancer.[1] The practice was not abolished until 1875, nearly 50 years after Blake’s death. 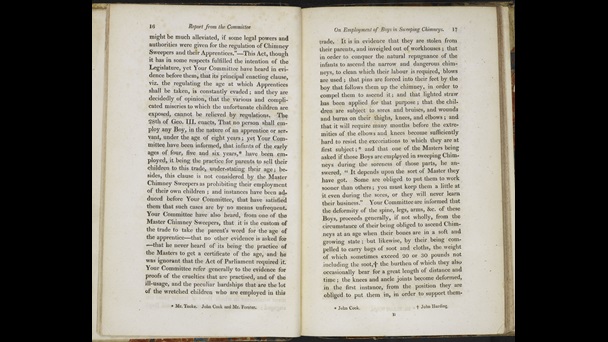 The Innocence poem, a dramatic monologue, spoken by a sweep in the simplest language and in rhyming couplets, opens with a direct, almost documentary account of precisely the process the parliamentary report outlines: the boy explains that he was sold by his father after the death of his mother. The reader, too, becomes implicated in his exploitation: ‘So your chimneys I sweep’ (my italics), he declares, though the suggestion is Blake’s; the speaker seems unaware of his own degradation.

Central to the poem is the dual contrast between the grim realities of the sweeps’ lives and the ecstatic vision of liberty contained in the dream of Tom Dacre, a new recruit to the gang. Tom dreams:

That thousands of sweepers, Dick, Joe, Ned and Jack,
Were all of them locked up in coffins of black,

And by came an angel who had a bright key,
And he opened the coffins and set them all free.
Then down a green plain leaping, laughing they run,
And wash in a river and shine in the sun.

Then naked and white, all their bags left behind,
They rise upon clouds and sport in the wind.

Where, in reality, their lives are restricted, death-infected (the image of the black coffins), in the dream, they are free, leaping, running, sporting in the wind. The dream takes place in a pastoral idyll – ‘a green plain’ – where there is colour, light, pleasure and laughter; the real world is monochrome, dark, subject to the pressures of city life, and a capitalist economy where the boys can only weep over their degradation.

This liberation, though, comes at a price. The angel who releases the sweeps with ‘a bright key’ tells little Tom ‘if he’d be a good boy / He’d have God for his father and never want joy’. This stipulation is repeated in the poem’s last line: the boys ‘need not fear harm’ if ‘all do their duty’. Such a submission seems an unlikely prescription from a social critic like Blake. While it is true that the dream helps Tom endure his misery (he feels ‘happy and warm’ when he wakes up), it becomes clear that Blake is not advocating passive acceptance of earthly misery in order to gain the joys of the kingdom of heaven after death.

Through the ironic use of the child-like anapaestic rhythm (two unaccented syllables followed by an accented one) which exposes such overly-simplistic, inane sermonising, Blake attacks the established church for perpetuating these insidious myths which maintain the dispossessed in a state of what Marx would later call false consciousness. Marx argued: ‘To abolish religion as the illusory happiness of the people is to demand their real happiness. The demand to give up illusions about theexisting state of affairs is the demand to give up a state of affairs which needs illusions.[2] Although starting from a very different philosophical position (Blake was hardly a materialist), Blake had come to an identical position half a century earlier. 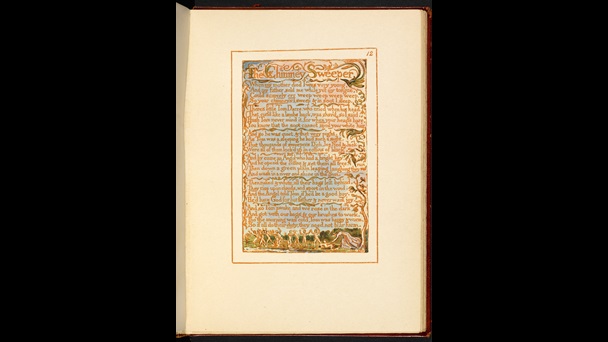 'The Chimney-Sweeper’ in Songs of Innocence.

‘The Chimney-Sweeper’ in Songs of Experience is an even bleaker poem. Nine of the 12 lines are spoken by the sweep but poem begins with another speaker who spies ‘A little black thing among the snow’. The colour palette here is distinctly monochrome with none of the brightness and green of Tom’s dream in the Innocence poem; the sweep is depersonalised, a thing. The imagery is typical of the Experience poems: it’s set in winter and whereas the sweeps in Tom’s dream are ‘naked’, free of the clothing which in Blake often symbolises social convention or restriction, the speaker here wears ‘the clothes of death’ and sings ‘the notes of woe’ (unlike the laughing in the dream).

The speaker, though, remains determinedly happy. His instincts, like any child in Romantic writing, are positively driven even though, unlike the boys in the Innocence poem, he understands his oppression. Indeed, his happiness seems to be the reason that his parents sell him into slavery:

Because I was happy upon the heath,
And smiled among the winter’s snow,
They clothed me in the clothes of death
And taught me to sing the notes of woe.

It also serves to absolve them from feelings of guilt as ‘They think they have done me no injury’. Having forced their son into enslavement, teaching him to sing ‘the notes of woe’, the parents then head to church to praise ‘God and his priest and king’, who, the boy tells us, ‘make up a heaven of our misery’. Interestingly, in an earlier draft, Blake wrote that this grim trio ‘wrap themselves up in our misery’, suggesting that they take comfort from the misery of others. The final version is far more powerful; the speaker’s parents collude with Church and State, actively constructing a heaven out of the misery of others, or, as Nicholas Marsh argues, ‘they “make up” a heaven where, in fact, there is “misery”’.[3] 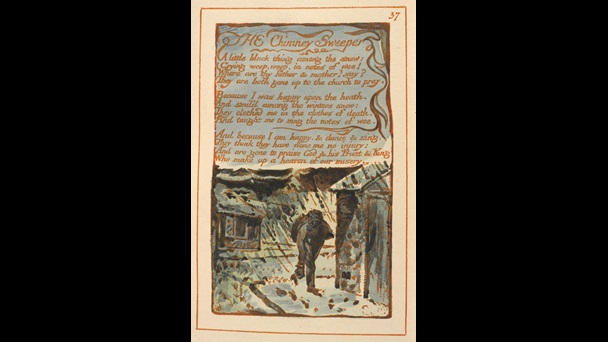 Both Chimney-Sweeper poems show Blake to be a radical critic of the social injustices of his age. His indictment of desperate material conditions and those institutions which perpetuate them is passionate and powerful, but his greatest anger is reserved for the forces – the established Church, mercenary and uncaring parents – that restrict our vision and prevent us from understanding both our oppression and the infinite possibilities of true perception.

My readings of these poems have been developed through discussions with many English students at Paston VI Form College but especially with Sophie Smith and Nell Burnham.

[2] Karl Marx, 'Preface to A Contribution to the Critique of Political Economy', in Karl Marx: A Reader, ed. by Jon Elster (Cambridge: Cambridge University Press, 1986), p. 301.