Wordsworth and the sublime

Professor Philip Shaw explores the role of the sublime in Wordsworth's autobiographical Prelude, explaining how the poet uses the concept to investigate nature, imagination and the divine.

A meditation rose on me that night
Upon the lonely mountain when the scene
Had passed away, and it appeared to me
The perfect image of a mighty mind,
Of one that feeds upon infinity,
That is exalted by an under-presence,
The sense of God, or whatso’er is dim
Or vast in its own being … (1805 Prelude, lines 66-73)

The final book of the Prelude (1805) opens with a description of a night-time ascent of Snowdon, a mountain in North Wales that Wordsworth climbed in 1791 when he was 21. Following an arduous journey to the summit the poet sees a flash of light which reveals ‘a huge sea of mist […] as far as sight’ can reach (line 51). From ‘a fracture in the vapour’ he hears ‘the roar of waters, torrents, streams / Innumerable, roaring with one voice’ (lines 59-60).

Later that night, Wordsworth reflects on his experience. The means by which ‘Nature’ transforms the mist into an ‘ocean’ (line 44), a vision of grandeur effacing the majesty of the ‘real sea’ (line 47), resembles the creative power of the imagination: that ‘glorious faculty / Which higher minds bear with them as their own’ (lines 89-90). Mind and nature, that is, are united in their ability to ‘mould’, ‘abstract’ and ‘combine’ the ‘outward face of things’ into images ‘awful and sublime’ (74-9; passim).

A Picturesque Tour of the English Lakes 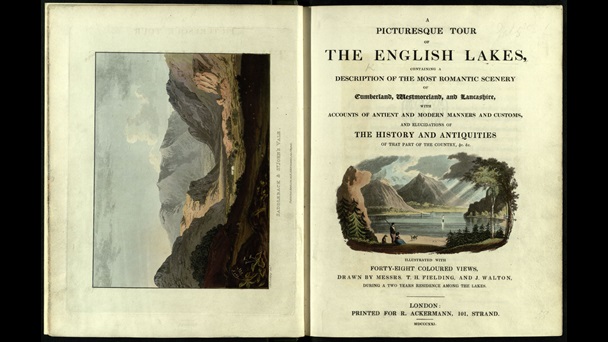 Much of Wordsworth's writing, including the Prelude, was inspired by nature, and especially the Lake District where he spent most of his life.

‘a sense of something ever more about to be’

When Wordsworth describes something as ‘sublime’ he combines several definitions of the term. In Peri Hypsous or On the Sublime, a work of literary criticism by the Greek author pseudo-Longinus (1st century BCE), sublimity refers to ‘excellence’ in language and to whatever is elevated or noble in the human spirit. In A Philosophical Enquiry into the Origin of our Ideas of the Sublime and Beautiful (1757) the influential critic and politician Edmund Burke argues that the sublime is ‘whatever is fitted in any sort to excite the ideas of pain and danger, that is to say, whatever is in any sort terrible, or is conversant about terrible objects, or operates in a manner analogous to terror’ (Wormsley, p. 86). For Burke, the sublime is associated with objects and events that, while threatening, are yet a source of ‘delight’. In nature, lofty mountains, raging seas and erupting volcanoes may all, when viewed under the right circumstances (not too close, but not too distant), be regarded as sublime. Burke also uses sublime in connection with abstract or obscure ideas, such as infinity, vastness and the divine. He points to a number of examples in literature, including the Bible and Milton’s Paradise Lost (1674), to illustrate this point.

In a passage from Book Six of the Prelude Wordsworth draws on all of these definitions of the sublime, and then adds something of his own. The passage describes a journey by foot across the Simplon Pass in Switzerland in 1790. Wordsworth and his companion have set out in search of the sublime in nature, but instead of an encounter with mountain glory, the travellers meet a peasant who informs them, anti-climactically, that they ‘had crossed the Alps’ (line 524). 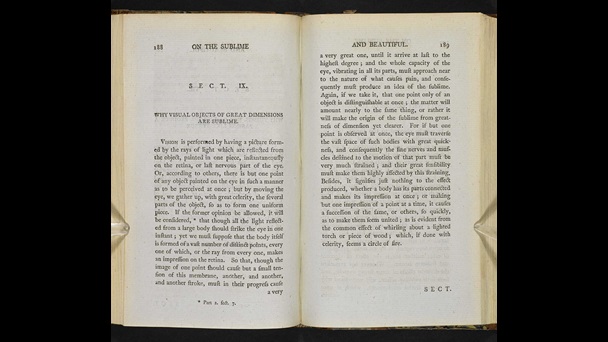 In A Philosophical Enquiry into the Origin of our Ideas of the Sublime and Beautiful (1757) Edmund Burke discusses the attraction of the grotesque, the terrible, and the uncontrollable, a stark contrast to the prevailing 18th-century preferences for the controlled and balanced.

An Avalanche in the Alps, a sublime landscape painting by Philip James De Loutherbourg 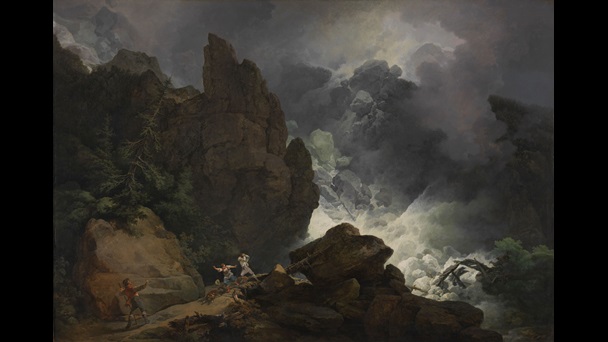 Philip James De Loutherbourg's painting, An Avalanche in the Alps (1803), captures
ideas of the uncontrollable sublime in nature, which Wordsworth hoped to find while crossing the Alps.
View images from this item  (1)

Imagination and the divine

The poet’s failure to locate the sublime in nature is countered, however, by a rousing hymn to the imagination. In lines that affirm the superiority of mind over nature, Wordsworth writes of how imagination reveals the ‘invisible world’ where ‘greatness’ lives (line 536). ‘Our destiny, our nature, and our home’, he continues:

Is with infinitude, and only there;
With hope it is, hope that can never die,
Effort, and expectation, and desire,
And something evermore about to be. (1805 Prelude, lines 538-42)

At this point in the poem imagination, revealed as infinite in power and scope, appears triumphant over ‘the light of sense’ (line 534), a synonym for the time-bound world of nature. But this image of the mind’s transcendence of matter is matched by a terrifying sequence of lines in which the ‘blasts of waterfalls’, ‘thwarting winds’ and the noise of a ‘raving stream’ become ‘Characters of the great apocalypse, / The types and symbols of eternity, / Of first, and last, and midst, and without end’ (lines 558-72; passim). With echoes of the Book of Revelation and of Paradise Lost the mode of sublimity that wins out in these lines is not the sublimity of nature or of mind, but of God.

The end of the Prelude may be read, therefore, as an attempt to resolve the split between mind, nature and the divine that is initiated in Book Six. When, following the Snowdon passage, Wordsworth writes of the ‘feeling of life endless, the one thought / By which we live, infinity and God’ (lines 183-4) he is endeavouring to link the grandeur of the sublime with the idea of the divine.

An alternative understanding of the sublime is developed by the poet’s sister Dorothy. In her notebooks Dorothy combines images of natural wonder with images of containment: the sea is ‘like a basin full to the margin’ (Alfoxden Journal, 24 February 1798, p. 147), a landscape is ‘spread out for minute inspection’ (Alfoxden Journal, 26 February 1798, p. 147). But even as these images suggest a mind attempting to encompass vastness, the potential for an imaginative separation from nature is checked by a desire to melt into natural forms. Dorothy’s sense of the sublime differs from that of her brother insofar as it shows a greater willingness to dissolve the boundaries between self and other, whether that other is understood as plant, mineral or animal or, indeed, as God.