Writing, publishing and revising Far From The Madding Crowd

Far from the Madding Crowd marked a turning point in Thomas Hardy’s career. It was the first of his novels to be written after he had decided to give up his work as an architect, the first to be written for a prestigious literary magazine closely supervised by a meticulous editor and, famously, the first to use the term ‘Wessex’ to identify the ‘partly real, partly dream-country’ setting in south west England. It was also his first commercial success. As Michael Millgate has demonstrated, it is ‘unmistakably a major work’, a novel of ‘astonishing confidence’, richness and vitality.[1] Hardy himself came to recognise its special qualities, admitting in 1901 that it had ‘a growing tendency to appear as the work of a youngish hand, though perhaps there is something in it which I could not have put there if I had been older’.[2] 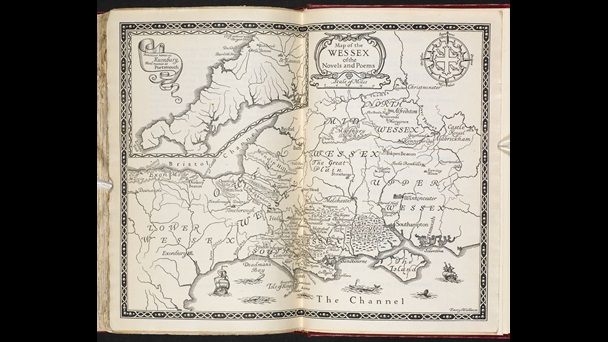 The literary geographical term ‘Wessex’, which Hardy used as a setting for his novels, is first used in Far from the Madding Crowd (1874).

Origins and composition of the novel

In November 1872 Hardy was surprised and delighted to receive a letter from Leslie Stephen, editor of the Cornhill Magazine, inviting him to contribute a serial. Realising that this was an important opportunity, Hardy proposed a pastoral story to be called ‘Far from the Madding Crowd’, in which ‘the chief characters would probably be a young woman-farmer, a shepherd, and a sergeant of cavalry’.[3] Almost a year later, in September 1873, he submitted the first 10 or so chapters of the novel and arrangements were made to begin publication in the January issue of the magazine. From then until the following summer he secluded himself at Bockhampton, the Dorset village where he had been born and brought up and where his parents still lived. Here, he told Stephen, he could write ‘within a walk of the district in which the incidents are supposed to occur’, jotting down ideas on large leaves or pieces of wood or stone if he had no paper to hand, and neatly tailoring the monthly instalments to the seasons of the year.[4] The final chapters were written ‘at a gallop’ in July, and the novel published in book form on 23 November 1874, shortly before the appearance of the last magazine instalment. 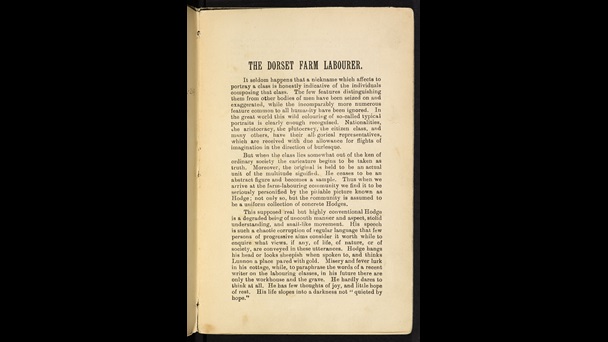 Hardy’s settings and characters were drawn from observation – in this pamphlet he argues against the stereotyping of farm labourers, proposing that this amounts to a caricature.

Far from the Madding Crowd began conventionally. The characters Hardy had outlined were familiar from popular fiction and melodrama; the lyrical opening chapters promised a traditional narrative on the pastoral theme which Stephen had requested, and city readers craved. As the novel progressed, however, it evolved into a more complex and challenging story, bringing with it unexpected and far-reaching editorial difficulties.

Stephen provided expert guidance throughout, from the division of chapters to the use of dialect. He took care to praise certain passages, such as the Great Barn chapter, but had no hesitation in recommending cuts. Some of these were necessary to reduce the material to the length of the magazine instalment; others – the conversation at the shearing supper, for example (ch. 23) – were intended to speed up the action. More significant were the cuts Stephen felt obliged to make out of ‘excessive prudery’. Acutely aware of the religious and moral sensibilities of the Cornhill’s highly respectable, upper middle-class subscribers, he altered the proofs to remove potentially offensive words or phrases. He advised Hardy to treat Troy’s seduction of Fanny ‘in a gingerly fashion’, and instructed him to tone down the treatment of Fanny’s death (ch. 43), eliminating all reference to the illegitimate baby.[5]

This treatment gave Hardy a taste of the editorial censorship he would experience regularly in the future. Despite the damaging effect on his overall design, at this early stage in his career he was prepared to compromise. ‘Perhaps I may have higher aims one day, and be a great stickler for the proper artistic balance of the completed work, but for the present circumstances lead me to wish merely to be considered a good hand at a serial’.[6]

From manuscript to print

As he wrote, Hardy’s original, simple outline developed into a carefully interwoven tale in which the lives of the principal characters are played out against the backdrop of a close-knit community and the wider natural world. The light-hearted, expansive tone of the opening chapters gradually sharpened and intensified; the stock figures with which he began became living individuals with human weaknesses and passions.

Hardy made many alterations in his manuscript as he went along - to the plot, to the language and imagery, and especially to his characters. Gabriel, whom we meet as a boyish, slightly bumbling, somewhat comic figure, becomes more of a hero, addressed as ‘Mister Oak’ by the villagers, and a worthier partner for Bathsheba; Troy, on the other hand, becomes less so. Dangerously attractive at first, he is dismissed abruptly only to reappear as a pantomime villain playing Dick Turpin, the popular hero of W. H. Ainsworth’s Rookwood, a favourite book from Hardy’s childhood. Both were gentrified - Oak by his progressively standardised speech, Troy through repeated references to his noble connections - to bring them into closer rivalry with Boldwood, the wealthy loner who is increasingly portrayed as a tormented victim. There are even attempts to make Bathsheba appear more ladylike, less assertive, in response to the hostility of contemporary critics.

Hardy’s manuscript revisions have been discussed in detail by Rosemarie Morgan, Robert Schweik and Simon Gatrell.[7]

Hardy continued to make revisions in later editions.[8] The most significant were undertaken for the first collected edition of the Wessex Novels, published in 1895. By this time Wessex, mentioned for the first time in Chapter 50 of Far from the Madding Crowd, had been taken up and transformed into a tangible region. The topographical details were fine-tuned: place names made consistent across all the novels, distances and directions specified, and an explanatory Preface added. By now Hardy also felt able to restore some of the expurgated elements of the vigil over Fanny’s coffin, and further emphasize Troy’s illegitimate birth and higher social status.

In 1901 he again made extensive revisions for a sixpenny paperback edition: the proofs, with Hardy’s manuscript corrections, are now in the British Library. Most important were two small changes made to the tense Christmas party scenes to suggest that Bathsheba strongly suspected Troy was still alive (ch. 52 and 53). This impression was strengthened in the 1902 Uniform Edition, and in the 1912 Wessex Edition, the title of the chapter describing Bathsheba’s reaction to Troy’s disappearance now changed from ‘Doubts arise; doubts vanish’ to ‘Doubts arise; doubts linger’ (ch. 48). In all these later editions Hardy continued to refine topographical details, adjust the use of dialect words, and make subtle changes to meaning or emphasis; even in the last years of his life he was still making notes for future revisions.

[8] Simon Gattrell, Hardy the Creator: a textual biography (Oxford: Clarendon, 1988) is a study of the textual history of Hardy’s novels, including the Wessex Novels edition of Far from the Madding Crowd.