Amusements and pastimes in Elizabethan England

Some Elizabethan entertainments, such as theatre and football, are still popular today. Others, such as animal-baiting, now seem shocking. Liza Picard takes a look at common 16th-century pastimes.

The great names of the Elizabethan stage – Shakespeare, Marlowe, Dekker, Ben Jonson – still retain their richness and power today. These plays could be bought to read at home, but it was much more fun to attend one of the several playhouses, such as the Globe, that had sprung up on the south bank of the river. The usual shape of the playhouse was, as Shakespeare put it, a 'wooden O’, open to the sky, with the stage at one side of it and galleries all around. Refreshments of fruit and nuts were sold throughout the performance, and came in useful as missiles if the audience disapproved of the play. Most of the audience stood, or walked about, in front of the stage. The more select could pay for a seat in one of the galleries, or even on the stage itself, where they could smoke their tobacco pipes, and gossip, and generally draw attention to themselves, and torment the unfortunate actors. The cast was all male, women’s parts being taken by boys. There was no scenery, but the costumes were often sumptuous, since it was the custom for the clothes of rich people sometimes to be given to the players after their death. Performances had to be given during daylight hours, because there was no stage lighting except by candles, which glinted on the gold lace and velvets of the costumes, and caused frequent fires. 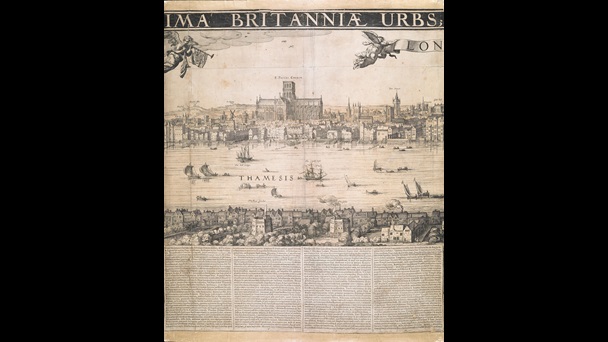 A modern audience would find this shocking, to put it mildly. Queen Elizabeth was a well-educated renaissance lady, yet in 1559, just a year after coming to the throne, she gave the French ambassador a special treat – a royal baiting of bulls and bears in her palace of Whitehall. The populace regularly attended the rings on the south bank, where they could watch various animals trying to kill each other – dogs against horses, sometimes with monkey riders for the dogs to bite, bears against the famous English mastiffs, mastiffs against bulls… The bears were well known to Londoners by their nicknames, rather like modern football stars.

There were probably many cock-pits scattered throughout London. There was, of course, one in royal Whitehall, but the common people patronised one near Smithfield, where the sessions could last four or five hours, and the betting was fast and furious. 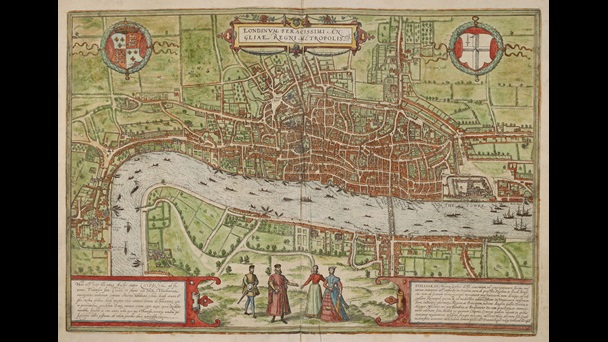 On the south bank of the river can be seen two rings, one for ‘Bowll bayting’ the other for ‘Beare bayting’. 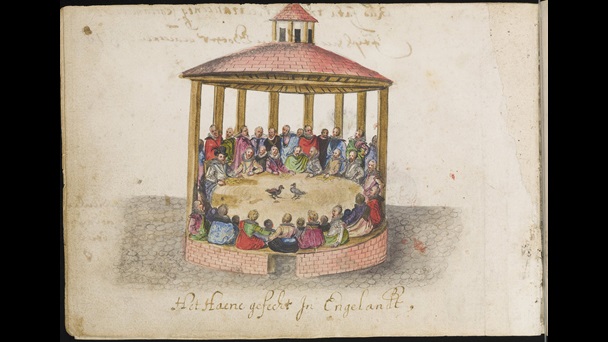 At the cockpit, spectators bet gold coins on which cock will win. The seated man with the beard and hat is probably King James.

Someone in Government must have spotted this passion for betting, and decided that it could raise some revenue for the Treasury. In 1567 the first lottery promised as first prize the astronomical sum of £5,000.

They would be paid partly in ‘ready money’ and partly in plate, tapestries and ‘good linen cloth’. Tickets cost 10 shillings each – far too much for the ordinary citizen to afford. To encourage as many people as possible to buy tickets, all ticket holders were promised freedom from arrest for all crimes other than murder, felonies, piracy or treason. If it had worked as planned the Government would have made £100,000. But alas, it didn’t. Investors were slow in buying their tickets. Another lottery was tried in 1585, when Elizabeth was desperately trying to raise cash for her various wars. But I have found no record of any significant prizes.

Bowling greens were everywhere. Archery was losing ground to small arms shooting, but Elizabeth still required every male between seven and 60 to possess, and be able to use, bows and arrows. Wrestling and football were popular with young men. In a hot summer they could cool off by a refreshing dip in the Thames.

Tobacco was smoked everywhere, in taverns and inns, at playhouses and in homes. It began as a medicinal remedy for coughs and colds, but soon became known for its pleasant narcotic effect. A foreign tourist remarked that ‘their preachers cry out on them for their self-destruction’, but when did good advice ever stop a determined smoker?

Cannabis and opium poppies provided useful home remedies for earache and pain relief. Surely some gardeners found them an enjoyable means of relaxation?

Elizabeth was expert at public relations, never missing a chance to remind her people of her status as their rightful monarch. She could be seen, and cheered, on her way down the river in the royal barge to visit friends, or to spend the summer in her favourite palace at Greenwich. When she came back to London from her frequent ‘progresses’ (tours) round the country, many hundreds turned out to greet her. If it was late in the evening her cavalcade was lit by a thousand torch-bearers. When she attended St Paul’s Cathedral to give thanks for the victory over the Armada, she was carried in a ‘chariot throne’, bejewelled, painted, wearing sumptuously embroidered robes. No Catholic image could have outdone her in splendour: a fitting monarch for her adoring people. 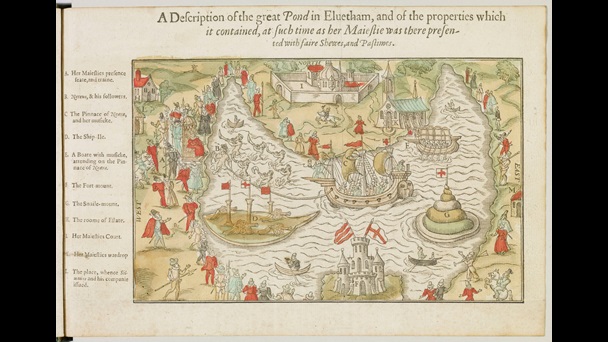 This woodcut shows the lavish spectacle prepared on Edward Seymour’s estate for a visit by the Queen.

Pliny’s The Secrets and Wonders of the World provided children with vivid descriptions of dragons and olipohants (elephants). For more serious tastes, Plutarch’s Lives and Chapman’s Homer were both available. The best seller of the time was Foxe’s Book of Martyrs, published in 1563, describing Mary Tudor’s persecution of her Protestant subjects, all too graphically illustrated with blood-curdling pictures.

The adventures of Francis Drake and his fellows fuelled an appetite for travel books. The Most Famous Travels of Marcus Paulius (otherwise known as Marco Polo) was published in English in 1579, describing the journey of three Genoese merchants by the overland route to (modern) Beijing, through the vast empire of Kublai Khan. Richard Hakluyt published the second edition of his The Principal Navigations, Voyages and Discoveries of the English Nation… between 1598 and 1600. Hakluyt was noted for his meticulous research. The same could not be said of the 14th-century author of Mandeville’s Travels, a highly fantastical account of travels in the Middle and Far East that included stories of men with eyes in their shoulders, and of weeping crocodiles. They still made a good read, and Walter Ralegh assured his readers that they were absolutely true in his 1596 publication The Discoverie of the Large Rich and Bewtiful Empire of Guiana, with a Relation [description] of the Great and Golden City of Manoa (which the Spanish call El Dorado), a shameless piece of advertising ‘spin’. Illustrated pornographic works, often Italian, were flooding the market. Ballads and pamphlets, too, could be fairly filthy. But some, imported secretly from the Continent, preached pro-Catholic subversion, the penalty for which could be death.

The Elizabethan poets, such as Edmund Spenser or John Donne, discovered the rich potential of the English language for simple, moving poetry.

Any gentleman would be expected to play an instrument, such as a lute or one of the viols, which came in sets, or ‘chests’, varying from a small version of a modern violin through to an unwieldy version of a double bass. (It took Italians such as Stradivarius, in the next century, to fix for all time the shape and potential of the family of violins and their cousins.) Equally, most of the leisured classes could sing part songs such as madrigals. A Roman Catholic family needed a small-scale sung mass to perform in their house, with only the voices of the family, the priest and perhaps one or two brave neighbours. Surprisingly, some composers managed to compose sacred music for Catholic masses as well as for the new Protestant religion.

Music for fairy dance at Elvetham Entertainment: ‘Elisa is the Fairest Queen’ 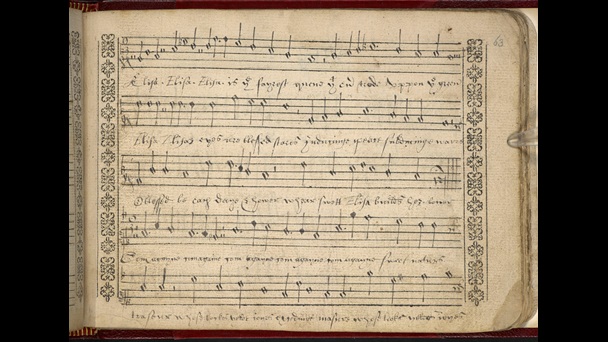 Music from a performance given for Elizabeth I.

Queen Elizabeth prided herself on her mastery of the keyboard instrument known as the virginals. She even arranged to be ‘surprised’ playing, all alone and unaware of his presence, when the French ambassador came to call.

At the other end of society, there was a brisk trade in ballads, which supplied news and scandal rather as the popular press does today. During Elizabeth’s reign, 3,000 ballads poured out of the printing presses. They cost a penny each, and told of all kinds of popular subjects. 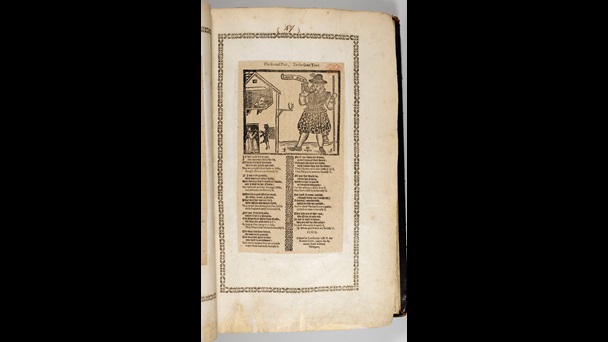 A ballad on the bawdy theme of cuckoldry.