An introduction to The Alchemist: the artist and the con

There are very few plays from the English Renaissance that modern readers find impossible to put down – but Ben Jonson’s 1610 comedy The Alchemist is one of them. For centuries, critics and audiences alike have delighted in its sharply drawn characters, its labyrinthine plot, its deftly interlaced imagery and its general brilliance. The antics of Doll, Subtle and Face capture our attention so completely that we almost forget that these are three con artists engaged in highly criminal as well as decidedly cruel schemes. The Alchemist, simply put, is a supremely clever story masterfully told.

Ben Jonson has long lived in William Shakespeare’s shadow, one of many dramatists from the period referred to, negatively, as 'non-Shakespearean'. This category seems remarkably unfair, for at the height of his powers Jonson is as nuanced, insightful and witty as Shakespeare. Indeed, The Alchemist’s long stage history attests to this: the play has attracted sizeable audiences in every era since it was written. What keeps audiences coming back? In part, it’s the splendid plot with its outsize characters, but there’s also a certain delight in the play’s craftsmanship. It is a dramatic tour de force, weaving metatheatricality, cultural satire and learned wit together into a dazzling tapestry of incandescent meaning. 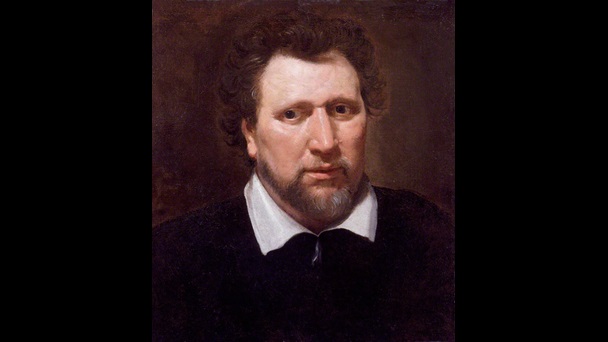 Portrait of Ben Jonson painted at the height of his literary career.

Metatheatricality: The Alchemist as a self-consciously theatrical play

Jonson’s relationship with the theatre was somewhat fraught. Whereas he often seems disdainful of the commonness of the stage, he also clearly revels in the imaginative opportunities it presents him. The Alchemist showcases this ambiguity. The fulcrum around which the play revolves is disguise: Subtle, Face and Doll (and even Surly and Lovewit) shift clothes, props, speech patterns, accents and characterisations. The play explicitly compares its action to theatre, with Doll referring to the 'parts' that she and her fellow tricksters are playing (1.1.144–145). Face fantasises about employing the simplicity of theatrical magic in his tricks: 'O, for a suit, / To fall now, like a curtain: flap' (4.2.6–7). And, of course, one of Face’s final cons involves literally costuming Subtle in theatrical garb to perform the part of the amorous Spaniard. All of this, and more, leads Jonson scholar James Mardock to pronounce the play to be 'Jonson’s most systematically and explicitly metatheatrical comedy'. 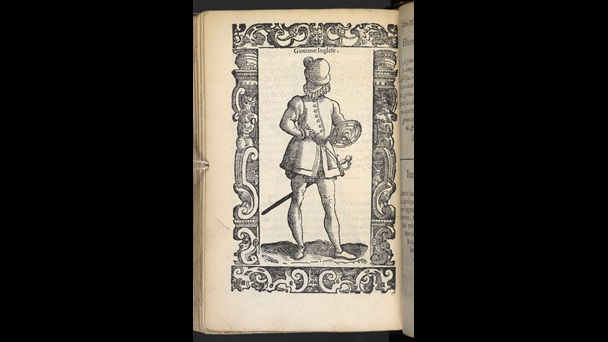 Woodcut showing a young English gentleman wearing the typical fashions of the period, as dictated by sumptuary laws based on social status and wealth.

Since the play does some of this obvious work for us, it’s easier to see the subtleties of the performances of the three tricksters. Face alters the most, perhaps, changing from the confident Captain into the subservient Lungs, from Lovewit’s butler Jeremy to whoever Face, himself, actually is. Subtle, since he specialises in mystical alchemical patter, plays relatively consistent roles in various schemes, but we are shocked when we see behind the mask of the grave Doctor of Alchemy into the greedy, lustful soul of Subtle himself. Doll, who often assumes the most vulnerable, submissive roles in the cons, begins the play by alternately bullying and cajoling Subtle and Face into an uneasy truce – a 'venture tripartite', as she calls it (1.1.135). All the world’s a stage, perhaps, but Doll, Face and Subtle only need the one empty house in London to perform in. 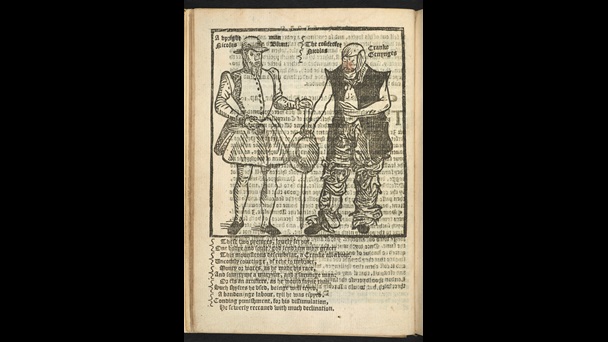 Pamphlet exposing the ploys used by criminals and confidence tricksters; the woodcut shows a con artist in two of his disguises.

Con artists and gulls: The Alchemist as a coney-catching play

Good theatre blends fiction with truth, and no critic would claim that Jonson crafted these characters out of whole cloth. Perhaps their incredible luck strains credulity; perhaps their ridiculous excesses inflate the 'venture tripartite' beyond belief. And yet con artists not very unlike Doll, Face and Subtle did work their deceptive 'confidence tricks' on thousands in Renaissance London. Impecunious authors capitalised on such widespread trickery by creating a new type of literature, the 'coney-catching' pamphlet that detailed the more outrageous scams. Coney-catching pamphlets claimed to be morally instructive, but their value was chiefly in their entertaining qualities. 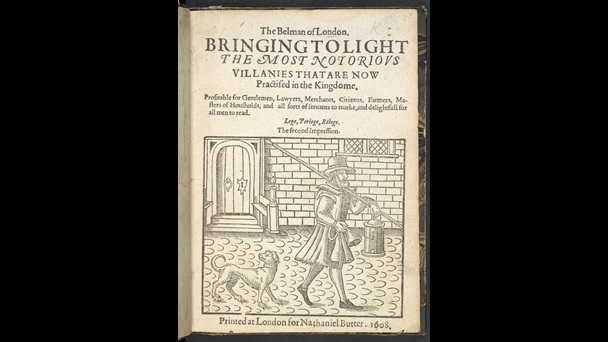 ‘Cony-catching’ pamphlet written by Thomas Dekker; the title page shows a watchman, with his bill and lantern, on patrol in London.

The Alchemist could be considered a coney-catching play. Jonson’s audiences would have recognised the figures of the con artists from the pamphlets. They might have recognised the victims from more realistic public spheres. In Sir Epicure Mammon, for instance, we certainly see an exaggeration of the lust and the gluttony native to many of his social class. But his references to the fabled riches of the lately explored New World (2.1.1–5) remind us of the kernel of truth behind his grasping facade: Mammon’s laughable greed is akin to that which motivated the worst of the conquistadores, those who colonised the Americas.

Jonson skewers other reprehensible cultural figures as well. Dapper and Kastril, both relatively recent arrivals in London, embody a range of negative stereotypes about countrified migrants to the City. Drugger, pitiably anxious to know 'by necromancy' how his tobacco shop should be arranged, points up the mundane, unimaginative ways Londoners thought about the genuinely fantastical parts of the city. Perhaps most sharply, Jonson sets up two characters to stand for his bitterest foes: the Puritans. Members of some obscure Dutch sect, Ananias and his elder Tribulation Wholesome loudly proclaim their holiness, and quietly enter into a plot to counterfeit gold coins through alchemy. While Puritanism in actuality ranged from rational religio-political reflection to startlingly hateful diatribe, Puritanism on stage frequently reflected the movement’s more extreme (and therefore more ludicrous) strands of thought. When Jonson delivers deliciously hypocritical and cunningly confounded characters such as Ananias and Tribulation Wholesome, audiences would have certainly recognised – and jeered – a pair of well-worn stage tropes. 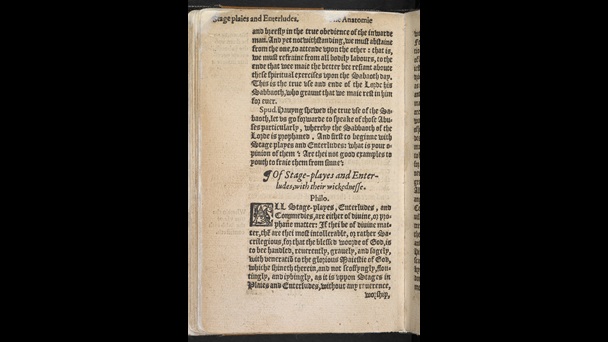 The Anatomy of Abuses ranges ‘from rational religio-political reflection to startlingly hateful diatribe’ in its condemnation of popular culture. This chapter rails against ‘stage-playes and Enterludes , with their wickednesse’.

Interestingly, Jonson adopts a much more ambiguous stance on the alchemy of the title. On the surface, the con artists' specific choice of cons, as well as the sordid portrayal of alchemy in the play, suggests that Jonson disapproves of alchemical deceptions. But the clear parallels between the alchemy scams and theatre – discussed above – hint that Jonson may grudgingly admire Doll, Subtle and Face. Further, Jonson may have seen himself as a sort of literary alchemist, which adds a fascinating biographical element to the alchemical motif. The Alchemist of the title might in fact be the conflicted ‘rare Ben’ himself, at once questioning, condemning and celebrating the theatrical art for which he is still known. 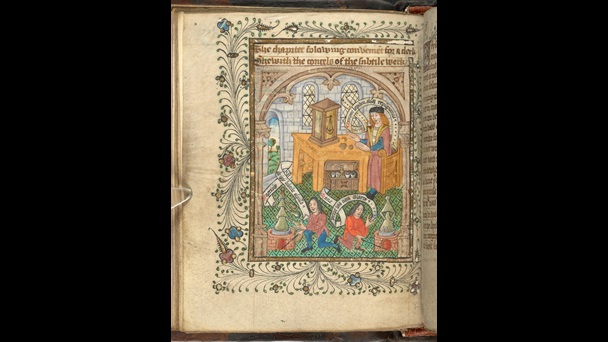 Illuminated manuscript describing and depicting the practice of alchemy, this page shows alchemists at work in a laboratory.

The Alchemist as a morally didactic play

Many critics see the play as morally didactic, but are split on what the moral is. Some, focussing on Subtle, Doll and Face, point to the final dissolution of their venture tripartite as illustrative that crime never pays – not even hilarious, well-designed crime. Others identify the moral as satiric condemnation of the play’s gallery of gulls, victims such as Mammon, Kastril and Drugger, whose greed and credulity drive them into ridiculous errors. Yet another school of thought holds that the play’s satire of metatheatrical performance constitutes a warning against the beguiling nature of theatre.

In our opinion, the play makes all of these arguments at once, and none of them singly. Jonson had a healthy self-image; he believed that he saw London clearly, and seems to have felt it his duty to expose the city’s dark side. It is entirely possible that Jonson aimed his satiric barbs at all of his characters: tricksters and marks, Mammons and Dappers, 'angry boys' like Kastril and Puritans like Ananias. No one was innocent, in Jonson’s eyes, so he spared no one.

Ben Jonson explains his views on the early modern theatre, and his moralistic motivation in writing satirical comedies in an epistle to the reader.

And then there's Lovewit, who may be the most puzzling character in the play. Subtle mentions Lovewit early in Act 1, but he does not appear on stage until Act 5. When he finally does show up, his reaction to Face’s machinations is not censure, but admiration, and he goes along with Face’s final wriggling schemes to tie up all of the scams previously co-ordinated by the venture tripartite. But why does Lovewit so eagerly support Face? Part of the clue is in his name: like Jonson himself, Lovewit’s taste is rather for cleverness than uprightness. No character in The Alchemist is really morally good; everyone, even Surly, is somehow involved in confidence tricks. Jonson, like Lovewit, prioritises cunning over righteousness. Perhaps we expect Lovewit to be the character Face believes him to be – the indignant, injured citizen, loudly condemning the violence done to his good name and the wreck made of his house. But Lovewit’s easy-going nature actually fits the play. In The Alchemist’s London, no one is completely clean, but by the same token no one is wholly detestable.

In the play’s final lines, Lovewit and Face turn towards the audience and rationalise their behaviour. The moment blurs the distinction between actors and characters. Lovewit acknowledges the spectators and begs their acceptance of the wacky tale just acted. Face breaks the fourth wall further, noting the 'pelf' he has gotten for his performances, and promising to use it 'to feast you often, and invite new guests' (5.5.157–65). This promise has two levels. Within the fiction of the play, the money Face refers to came from his multitudinous schemes, and he will use it to perpetrate new schemes with Lovewit as his ally. Outside the play’s fiction, the actor promises to use the money the audience paid for their tickets to improve the Blackfriars performance space (where The Alchemist was acted) and to continue performing. 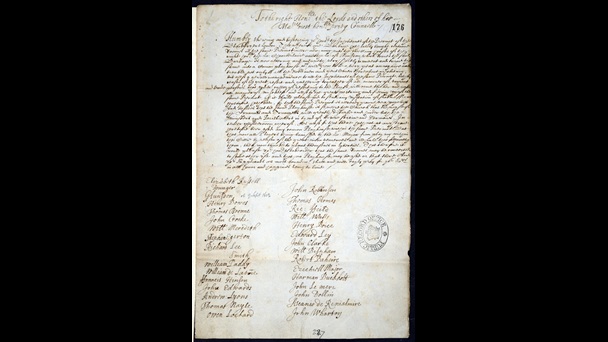 Blackfriars residents were concerned that ‘vagrant and lewd persons … under colour of resorting to the plays, will come thither and work all manner of mischief’.

These branching senses share one point, though: the show will go on. Theatre triumphs, in The Alchemist’s London and in Ben Jonson’s London. And, in the end, theatre proves the most legitimate alchemist of them all, truly transmuting words, actions, stories and characters into golden images of success.