Focussing on key quotations and theatrical interpretations, Tamara Tubb explores the character of Gertrude in Hamlet and her role within the play.

Exploring the character of Gertrude

Gertrude is Hamlet’s mother and Queen of Denmark. She was married to the murdered King Hamlet (represented by the Ghost in the play) and has subsequently wed Claudius, his brother. Her close relationships to the central male characters mean that she is a key figure within the narrative.

Photographs of John Gielgud and Peggy Ashcroft in Hamlet 1944 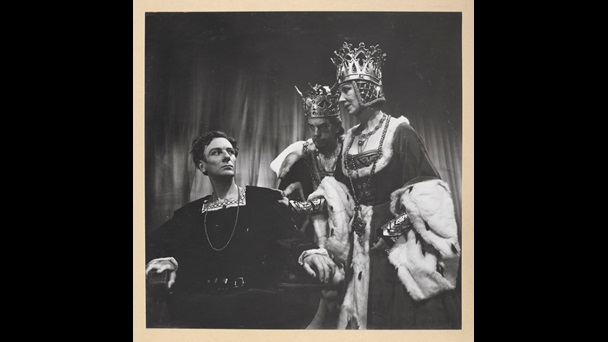 Photograph from the critically acclaimed 1944 production of Hamlet at the Theatre Royal Haymarket in London. Gertrude (played by Marian Spencer) attempts to talk to a suspicious and resentful Hamlet (John Gielgud) while Claudius (Leslie Banks) looks on.

King Hamlet’s death and Gertrude’s wedding to Claudius happen immediately prior to the opening of the play. These two events are the cause of Hamlet’s distress and disgust in Act 1, and form the basis of the revenge plot. However, Shakespeare deliberately leaves the extent of Gertrude’s historic involvement with Claudius (as both his lover and potential accomplice in murder) unclear. Unlike her male counterparts, Gertrude does not have any soliloquiess and is therefore denied the opportunity to present her inner thoughts and feelings to the audience. For these reasons, the true nature of her character and motivation is ambiguous.

The most enduring characterisation of Gertrude – as shamelessly sensual and shallow – is provided by Hamlet and the Ghost. Hamlet frequently mentions his mother’s sexuality, and obsesses about her physical relationship with Claudius, describing their marital bed as ‘incestuous sheets’ (1.2.57) and ‘an enseamèd bed, / Stewed in corruption’ (3.4.84–85). The Ghost also speaks of Gertrude’s sexuality when he bitterly laments:

So lust, though to a radiant angel linked,
Will sate itself in a celestial bed
And prey on garbage. (1.5.55–57)

The Ghost cites Gertrude’s voracious lust as the cause of her swift marriage to his brother (the ‘garbage’ in this metaphor). Gertrude’s sexual relationship with Claudius defines her character for both Hamlets, and taints the audience’s perception of her as an intemperately lustful and self-indulgent individual. However, Gertrude says nothing within the play text to either confirm or deny this assessment. The language she does use paints a different picture altogether.

Gertrude’s role has traditionally been seen as passive, with critics often discounting the few, short, speeches she makes as merely the reflection of her male counterparts’ thoughts and opinions. Yet upon closer analysis, her speech proves to be invariably direct, insightful and innuendo-free. Gertrude often anticipates, or correctly identifies, key moments, themes, or implications within the play as a whole.

Her clipped instruction to Polonius to speak ‘[m]ore matter with less art’ (2.2.96) identifies Polonius as a pretentious, rambling old fool while at the same time asserting her authority and intelligence – all of which is accomplished in a poetic heartbeat.

She instinctively perceives the true cause of Hamlet’s antic disposition in Act 2, and doesn’t mince words when she explains to Claudius that it is their union which has upset her son so:

Despite Gertrude’s gift for making shrewd observations she appears content not to act upon them, and instead submits to the schemes of her husband and his councellors in the first half of the play: ‘I shall obey you’ (3.1.38). Gertrude’s compliance is open to interpretation: does it demonstrate passiveness and apathy, or simply dedication to her spouse and trust in his judgement regarding her son? Gertrude is therefore enigmatic, and because of this her character struggles to define itself against the Hamlets’ explicit opening opinions. However, the strength and complexities of Gertrude’s personality do emerge as the play progresses and she is forced to confront the realities of her situation.

The pivotal and revelatory closet scene of Act 3, Scene 4 is the first and only instance in which Hamlet and Gertrude are alone together on stage. It is the intensity of their interaction, as well as the shock of Polonius’s assassination and

Hamlet’s subsequent accusations of murder and incest, which begin to reveal the emotional depths of Gertrude’s character:

The knowledge that her first husband, King Hamlet, was murdered by Claudius causes Gertrude to experience a moral awakening: what was once an ethical grey area (her ‘o’erhasty marriage’) has become a ‘black and grainèd spot’ upon her very soul. Gertrude’s suffering at these revelations is genuine; her repeated requests for ‘sweet Hamlet’ (3.4.88) to ‘speak to me no more’ (3.4.86) belie the shame that she now feels. Her reaction is such that even the Ghost, a previous critic, observes that ‘amazement on thy mother sits’ (3.4.104) and warns Hamlet not to distress her further. 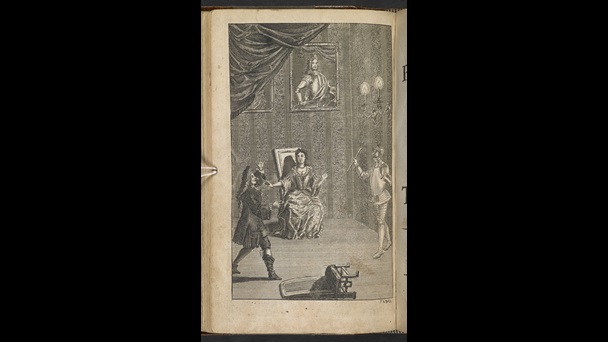 This illustration of the closet scene in Act 3 Scene 4 shows Gertrude and Hamlet in distinctively 18th-century costumes and wigs.

Despite being overwrought Gertrude is able to muster her resolve and come to the aid of her son. She agrees not to divulge that Hamlet is ‘mad in craft’ (3.4.177) and not in fact:

In this passage Gertrude swears on her life to keep Hamlet’s sanity a secret, and to keep her own knowledge of her first husband’s murder a secret from her second husband – his murderer. The intimacy forged between the two characters in this scene paves the way for the tragic finale of the play, and Gertrude’s role within it.

Not only is Gertrude a key figure in the events which inspire and compel Hamlet’s quest for revenge, but she is also instrumental in the actualisation of that revenge. Though her character can be seen as passive for the first part of the play, it is in Act 5, Scene 2 that she fully realises her dramatic potential. She wilfully disobeys Claudius by drinking the poisoned wine. She dies with cries of ‘the drink! the drink! I am poisoned’ (5.2.264), and in so doing identifies Claudius as her killer. This, then, gives Hamlet the clarity of purpose, and the means and motive for revenge, which he has soliloquised over and struggled with throughout the play. As the scholar Marguerite Tassi says of Gertrude, ‘[i]n fulfilling her tragic role, the end crowns all; in the final moments of her life, she performs an extraordinary act that gives Hamlet motive and cue for killing the King’.[1]

Hamlet, published by the Cranach-Presse 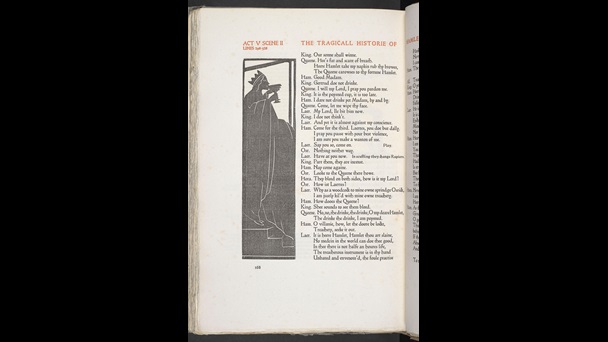 The ambiguity surrounding Gertrude’s character means that she can be represented on stage and screen in a variety of ways.

The Royal Shakespeare Company’s 2008 theatre production and film (2009) of Hamlet, directed by Gregory Doran with David Tennant as Hamlet, portrayed Gertrude (played by Penny Downie) as overtly sexual. In a BBC interview Doran explained that his production was rooted in the premise that Gertrude and Claudius enjoyed ‘a vigorous sexual relationship’ within, and prior to, the events of the play.[2] He viewed the two characters’ marriage as a love match. Gertrude’s persona, in this version of the play, is consistent with the Hamlets’ view of her as shallow and lustful. Speaking as Gertrude in interview, Downie declared, ‘I was just very pleased that I could have what I wanted, which was Claudius and the crown’.[3]

However, these traits do not necessarily define or restrict her character and dramatic potential. Instead, Gertrude’s love for Claudius creates a thrilling twist to the closet scene in which he is revealed as a murderer. The final Act, in which she is clearly aware that the wine is poisoned, sees her sacrifice herself to save Hamlet. This is the tragic pinnacle of the production, and shapes its remaining moments.

In contrast, Kenneth Branagh’s 1996 film – which he both directed and starred in – presents Gertrude as a mild, ineffectual but basically honest dynastic pawn. Julie Christie, who played Gertrude, said of her: ‘she is not very well developed – none of the women in the play are. She’s a passive character who never makes herself clear’.[4] In this production Gertrude is seemingly oblivious to the political and murderous manoeuvrings surrounding her. In the final Act she is blissfully ignorant of her husband’s plot to poison her son, and her death is merely one of the many that populate the play and provide a gory backdrop to Hamlet and Claudius’s rivalry.