Alexandra Melville provides a close reading of the villainous character of Iago in Act 2, Scene 1 of Othello.

In Act 2, Scene 1 of Othello, Iago formulates his plan to drive Othello mad. Shakespeare shifts the action from Venice to Cyprus. A storm has dispersed the Venetian fleet so that Cassio arrives first, anxious for Othello's safety. Desdemona arrives later with Iago and Emilia. The group wait, bantering on the topic of women. Iago notices Cassio's courteous manner towards Desdemona and resolves, 'with as little a web as this will I / ensnare as great a fly as Cassio' (2.1.164). Desdemona is relieved by Othello’s arrival and the joyful party depart, leaving Iago with Roderigo.

In this key passage (2.1.191–254), Iago persuades Roderigo that Desdemona loves Cassio. His speech plays upon stereotypes, revealing the dangerous underbelly of his earlier misogynistic ‘jokes’. His language is heavily ironic, repeatedly calling Cassio a ‘knave’, though we know this is the role Iago himself gleefully identifies with. As he reminds us in his following soliloquy, ‘knavery’s plain face is never seen till used' (2.1.267). 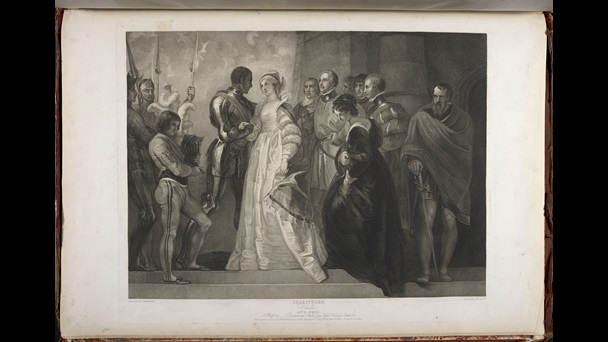 An illustration of Act Two, Scene 1 of Othello. Iago looks on as Othello and Desdemona greet each other.

How does Shakespeare present Iago here?

Iago makes it clear that his object is discord. The metaphor of Othello and Desdemona as ‘well tuned’ string instruments (2.1.191–92) portrays their current harmony but also implies their vulnerability: it is not difficult for Iago to ‘set down the pegs’ – fiddle with the tuning keys – of their relationship. His control of their heartstrings mirrors his control of Roderigo’s purse strings (1.1.2–3). The image of discordant music is a fitting one for his actions, as Iago’s success lies in his ability to distort and pervert what should be other characters’ most positive traits: Othello’s passionate honour, Desdemona’s commitment, Cassio’s courtesy. This aside also encapsulates his keen sense of irony (‘As honest as I am’, 2.1.193) and the role of the audience. Iago’s true intentions are never revealed to other characters – it is only through sneaking asides and hate-filled soliloquies that we are given access to his plots. In this manner, we are colluders, silent witnesses of his evil, failing to intervene.

Iago’s co-conspirator, Roderigo, has less access to his diabolical plans than we do, despite Iago posing as his benefactor with astonishingly little effort: 'Pish! But sir, you be ruled by me' (2.1.248). Iago is portrayed, through Roderigo's compliance, as masterful and persuasive, laying the ground for the ease with which he later poisons Othello's mind.

Photograph of Conrad Nelson as Iago in Othello at the West Yorkshire Playhouse, 2009 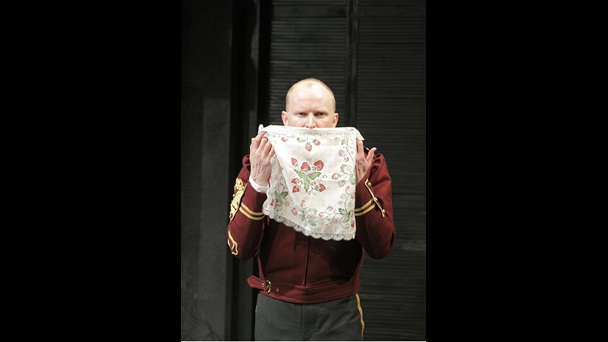 Iago, in a later scene, holding the handkerchief that will become a vital part of his plan.

The key theme in the passage is sexual appetite. Iago portrays Desdemona as lustful, desperate to trade Othello for a more refined Cassio. Racial and female stereotypes also dominate. Iago refers to Othello not by his name but as 'the Moor', calling him 'the devil' (2.1.216) and 'defective' (2.1.220), a racist portrayal which makes Desdemona's unfaithfulness more believable to Roderigo. Iago's misogyny has been plain earlier in the scene and builds here: young women are portrayed as foolish, having an innately sexualised 'nature' (2.1.222–23) and whorish for touching hands, even for thinking.

Photograph of Hugh Quarshie and Lucian Msamati in Othello, 2015 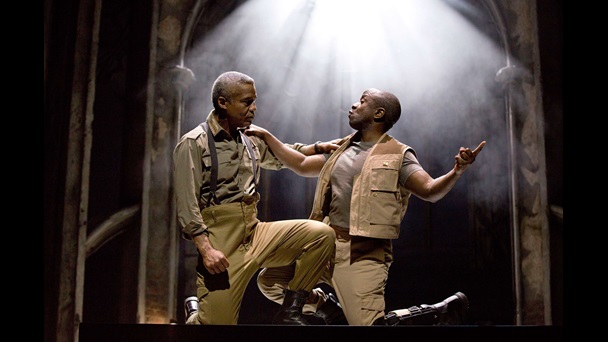 In the RSC’s production, both Othello and Iago were played by black actors, altering the impact of Iago’s most racist lines.

Iago’s reputation for straightforward honesty is the foundation of his deceptions. Iago’s crude language is excused as that of a straightforward soldier, with Cassio allowing, 'He speaks home, madam; you may relish him more in the soldier than in the scholar' (2.1.161–62). This conflation of honesty with soldierly bluntness disadvantages Desdemona, who can never communicate her honesty in this manner. Later, it will ensnare Othello: 'give thy worst of thoughts / the worst of words' (3.3.133–34).

But, away from his superiors, Iago’s crudeness becomes obsessively salacious. In the speech he dwells on body parts – eyes, hands, lips, blood – and the 'act of sport' (2.1.217), i.e. the supposed sexual activity of Desdemona and Cassio. Iago portrays desire in low terms, with reductive language: Desdemona's adoration is 'violence', Othello's wooing tales are 'bragging ... lies'. Iago's base reduction figures sex as hunger: 'her eye must be fed' (2.1.215). Like a devouring sexual animal, Desdemona will need an attractive man 'to give satiety a fresh appetite' (2.1.217–18). Desdemona is graphically portrayed as rejecting continued ‘consumption’ of Othello: 'her delicate tenderness will find itself abused, begin to heave the gorge, disrelish and abhor the Moor' (2.1.221–22). In this image, Iago suggests gagging and retching, which, along with the concept of 'abused' 'tenderness', has connotations of disgust with oral sex. Food imagery abounds. Retorting, 'The wine she drinks is made of grapes' (2.1.238), Iago implies that Desdemona is just like all women – women who consume and indulge in gluttonous pleasures. The image is reversed later in the play, when Emilia comments that men 'are all but stomachs, and we all but food' (3.4.93). Iago's food imagery contains sexual innuendo: 'Blest fig's end!' (2.1.238). This is a contemporary obscenity, figs being associated with the female vulva.

But Iago's salacious language is just that – words. There is no evidence for adultery except that Cassio is 'a slipper and a subtle knave' (2.1.229), his slipperiness emphasised by the sibilance, and that Desdemona was seen to 'paddle with the palm of his hand' (2.1.240–41). Nothing has actually happened. Although Roderigo counters, ‘I cannot believe that in her. She’s full of most blessed condition’, the sheer volume – and forcefulness – of Iago’s words obscure the illogical reasoning and overpower Roderigo. And the trap itself is so subtle as to be almost hidden: all Iago asks is whether Roderigo saw Desdemona 'paddle' Cassio's hand, a playful word echoing the image of 'sport' and also Cassio’s supposedly watery nature. Roderigo dismisses it as 'courtesy' but admits he 'did' see it. Yet earlier Iago tells us it is Cassio who 'takes her by the palm' (2.1.163). Through Iago's language, Roderigo is duped into mis-seeing – a trick Othello will later fall for.

Iago's speech is in prose, like many of his asides. With Roderigo's extended silence, it too feels like an extended aside. The contrast is stark between Othello's stately verse (2.1.194–204), and Iago's sneaking prose. The prose also contrasts with Iago's scene-closing soliloquy (2.1.267–93), where the constrained verse follows his precise, if delusional, reasoning. Shakespeare uses prose for many reasons: for comic or intimate exchanges, for lowly characters, for convention-defying princes such as Hamlet. Here, Iago's prose feels like a loosening, like a man undoing his belt a notch. Engaged earlier in complex word-play with Cassio and Desdemona, he can now relax into an easier deception: false intimacy with Roderigo. The prose allows Iago to produce a persuasive outpouring and release repetitious piles of images designed to bury Roderigo's weak objections. He only manages three (2.1.211, 236, 242) before conceding with an unconvincing 'Well' (2.1.256), perfectly expressive of his spinelessness. It also provides a closing irony to the passage – nothing will be 'well' on Cyprus any more.

Iago's power over Roderigo is emphasised through his sentence structure. Repeated imperatives begin the speech: 'Come hither' (2.1.206), 'Lay thy finger thus', 'let thy soul be instructed', 'Mark me' (2.1.212). All are instructions to be quiet and listen, which Roderigo submissively obeys. Having set himself up as Roderigo's instructor, Iago goes on to lecture him through a series of questions, mainly rhetorical. He even draws Roderigo's conclusions for him, using the language of instructive discipline to describe imagined adultery: 'when these mutualities so marshal the way, hard at hand comes the master and main exercise' (2.1.246–48). Iago closes just as he began, with a command to follow instructions: 'watch you tonight; for the command' (2.1.249–50). The circular structure of the speech reinforces his enclosed grip of Roderigo.

Iago is misogynistic. But a historicist reading could examine his depiction of women as a product of his time and culture. The Jacobean view of Venetian women, in particular the idea that they were sexually immoral compounds how credible Roderigo, and Othello, find Iago's portrayal of Desdemona. Jacobean portrayals often reduce women to saints, mothers or whores. Indeed, Iago's argument itself is construed in the language of female reproduction, described as a 'most pregnant and unforced position' (2.1.224) that reminds us of the Jacobean archetype of the perfect yet paradoxical woman, the virgin mother. The Jacobean ideal of total chastity leaves Desdemona vulnerable to an unforgiving male gaze. In fact, Iago's misogyny pales in comparison to some found in contemporary dramas, such as Ben Jonson’s Volpone, also set in Venice, and John Ford’s 'Tis Pity She's a Whore.

However, such extreme misogyny is the preserve of villains in Jacobean drama, suggesting that they, and Iago, overstep the mark. Iago's envious depiction of Cassio as 'handsome' and 'young', while assigning him his own character traits – 'a knave', 'the mere form of ... seeming' (2.1.227), 'a finder out of occasions' (2.1.229–30) – implies he has a jealous nature. Iago's rage against female sexuality may therefore be just one example of his spiteful attacks on ‘otherness’ to soothe his sense of social impotence. It has even been suggested that Iago is literally impotent, causing his embittered sexual jealously. It certainly makes Desdemona's retort to Iago earlier in the scene – 'Oh, most lame and impotent conclusion!' (2.1.158) – more telling.