Focussing on kingship and power, Andrea Varney examines the character of Malcolm in Act 5, Scene 9 of Macbeth – the play’s final scene.

The final scene of Shakespeare’s Macbeth signals balance after excess, kingship after tyranny, and calm after conflict. The noble Macduff has defeated Macbeth in single man-to-man combat, as an act of vengeance for the slaughter of his family. Macduff then presents the young Malcolm with Macbeth’s ‘cursed head’ as a trophy of victory. This marks the exchange of power from Macbeth as false ‘usurper’ to Malcolm as the legitimate ‘King’ (5.9.20‒21). Malcolm rewards his loyal thanes by making them Scotland’s first earls; he calls his people home from exile, and invites them to see him crowned. The broken circle seems mended as Malcolm – the son of the murdered King Duncan – is restored to the Scottish throne.


However, our reaction depends on how we see Malcolm, and how we respond to Macbeth’s death. There is a sense of poetic justice as Macbeth is brutally punished, but we also feel the tragedy of his wasted potential, and we might even question whether Malcolm’s reign will last. 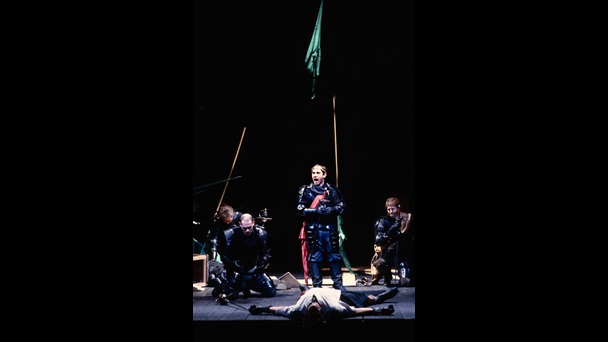 The final scene of Macbeth, with Nicholas Woodeson as Malcolm in the Royal Shakespeare Company’s 1986 production directed by Adrian Noble at Stratford-upon-Avon.

Language, form and structure: How does Shakespeare present Malcolm in this scene?

In this last scene, Malcolm assumes the role of king with ceremonious ritual. He is dignified and stately, but he may seem stiff and rigid after Macbeth’s destructive energy.

The words ‘Hail, King’, ‘Hail, King of Scotland’ (5.9.19;25) resound through the scene with a mounting sense of triumph, as more voices join in the cry and confirm Malcolm’s sovereignty. In response, Malcolm takes on the formal language of kingship, exchanging the personal pronoun ‘I’ for the royal ‘we’ (5.9.1; 26). As king, he must be more than himself, representing the ‘body politic’ of Scotland, as well as his individual interests as a man.

Malcolm also echoes the language used by his father, repairing the bloodline that was cut when Macbeth seized the throne. Both use natural metaphors to convey the close bond between the king and his nobles, presenting the feudal order as harmonious and fruitful. Malcolm says his royal duties will be ‘planted newly with the time’ (5.9.31); while Duncan had ‘begun to plant’ his thanes and would ‘labor / To make [them] full of growing’ (1.4.28‒29). Malcolm also reminds us that he reigns by the ‘grace’ of God’s ‘Grace’ (5.1.38). He is sanctioned by the divine right of kings, just as Duncan was ‘the Lord’s anointed’ monarch (2.3.68). 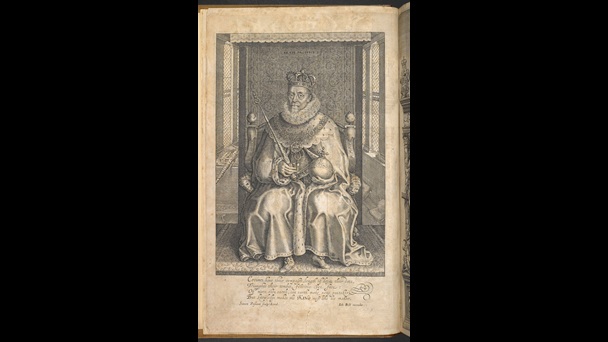 King James argues for the divine right of kings – the idea that the monarch’s authority comes directly from God.

This contrasts dramatically with the ‘breach in nature’ (2.3.113) after Macbeth murdered Duncan, when the ‘Earth / Was feverous’ (2.3.60‒61) and ‘chimneys were blown down’ (2.3.55). The king, the state, the weather and God are all bound up together. Violence against the king’s body disrupts Scotland’s order, causing the ‘unnatural’ events we witness in the play (2.4.10).

Malcolm’s words seem deliberately measured and precise after Macbeth’s excesses. He uses financial language, promising not to ‘spend a large expense of time’ (5.9.26) before he reckons up the love of his thanes, and repays what he owes. Similarly Duncan expresses his gratitude in terms of debt and ‘payment’ (1.4.19). When Malcolm says he will do what’s needed in ‘measure, time, and place’, the commas force the actor to pause, slow down and fully savour the moment, letting the audience breathe a collective sigh of relief. As so often in Shakespeare, the last lines are rhyming couplets, reinforcing the sense of balance: ‘So thanks to all at once, and to each one / Whom we invite to see us crown’d at Scone’ (5.9.40‒41).

Yet despite his composed manner, Malcolm’s description of Macbeth and Lady Macbeth is unflinchingly brutal. He bluntly redefines them as a ‘dead butcher, and his fiend-like queen’ (5.9.35), reminding us of how far they’ve sunk from the ‘noble’ couple they seemed (1.2.66). His language seems to deprive them of their complex humanity. It compares Lady Macbeth to the witches or ‘juggling fiends’ (5.8.19) and reduces Macbeth to a bloody, emotionless killer. In doing so, Malcolm makes us confront the full horror of their actions, but he also increases the pathos of their tragic fall from greatness.

How is Malcolm presented in the play as a whole?

The play was probably written around 1603‒06, soon after the Scottish King James came to the English throne and became the patron of Shakespeare’s company, the King’s Men. Macbeth presents a flattering image of James’s ancestor, Banquo, but raises troubling questions about the weaknesses of kings. As a character, Malcolm serves as a benchmark by which we can judge Macbeth as a ruler. Alongside Banquo and Duncan, he helps us weigh up conflicting ideas about manhood, family, royal duty and ‘Vaulting ambition’ (1.7.27).

In the first act, Duncan names Malcolm as ‘the Prince of Cumberland’, the lawful heir of Scotland (1.4.39). Immediately, he is established as an obstacle to Macbeth’s unlawful ambitions – ‘a step / On which I must fall down or else o’er leap’ (1.4.48–49). This might lead us to expect a dramatic clash between them, but when Duncan is murdered, Malcolm flees. Sensibly – but perhaps not heroically – he seeks allies in England and his younger brother Donalbain escapes to Ireland. As fugitives, they are suspected of killing their own father, and Macbeth seizes the crown for himself. So the conflict between Macbeth and Malcolm is delayed until the final act, when their soldiers meet in battle.

Importantly, Malcolm’s reaction shows his difference from his father. Both men are keenly aware that appearances can be deceptive, but Duncan fails to act on it. As king, he knows how hard it is to read the truth in faces (1.4.11‒12), but he still lets himself be deceived. With stark dramatic irony, he puts his trust in Macbeth, who seems an ‘innocent flower’ but is really a ‘serpent’ (1.5.65) who wields a dagger against him. By contrast, Malcolm observes that ‘There’s daggers in men’s smiles’ (2.3.140) and takes pains to find men’s real motives.

While Duncan seemed honest, but also gullible, Malcolm uses deception in the name of decency. At the English court of King Edward – in Act 4, Scene 3 – Malcolm tests Macduff to ensure that he’s not ‘treacherous’ (4.3.18). To provoke a reaction, Malcolm falsely presents himself as a tyrannical ruler – full of ‘stanchless avarice’ (4.3.78) and uncontrolled ‘lust’ (4.3.63). He then lists the graces of a good king ‒ ‘justice, verity, tempr’ance, stableness’ ‒ but insists that he has ‘none’ of them (4.3.92; 91). When Macduff finally cracks and refuses to let such a man govern, Malcolm reveals his true chastity and self-control. In the course of this strange game, he manages to give us his vision of true kingship. While ‘devilish Macbeth’ (4.3.117) is the symbol of immoderate desire, Malcolm will be the model of virtue and restraint that we see in the last scene.

How has the last scene been interpreted?

The scene is sometimes performed with a loud fanfare and cheering crowds, creating a stirring image of new hope for Scotland. But many critics and directors see the end of Macbeth as unresolved and unsettling. Malcolm might attempt to present an air of finality, but we often have a lingering sense of the tragic loss of Macbeth, or the haunting power of the witches.

Andrew Gibson argues that in ‘all of Shakespeare’s tragedies … peace is something of an anti-climax’. We return to ‘order and justice’, but ‘we can’t really respect the representatives of order’. The ‘bluff, cool, efficient’ soldiers seem lacking in ‘humanity’ after the death of the tragic hero. Malcolm’s words seem ‘flat’, after the ‘bleak power’ of Macbeth’s poetry. The restrained couplets seem empty after we’ve heard the poignant claim that ‘Life’s but a walking shadow’ (5.5.24). So we’re left with an ‘insoluble paradox’, caught between what is ‘good and right’ and the ‘passionately negative’ power of ‘imagination’ and ‘feeling’.[1]

Others draw attention to the supernatural threat from the ‘weird sisters’ (1.3.32). When the soldiers hail Malcolm, they unknowingly echo the witches’ cry of ‘Hail’ when they greeted Macbeth and Banquo (1.3.48–50; 62–65). This might create a contrast between the first and last acts, suggesting that the witches will be crushed by this new king. On the other hand, it could imply that little has changed since they prophesied Macbeth’s kingship. Perhaps Macbeth and Malcolm will not be so different. Perhaps the promise of greatness conveyed in the words ‘Hail, King’ will also corrupt Malcolm. Or perhaps his reign will be challenged by the witches’ unfulfilled promise that Banquo’s ‘children shall be kings’ (1.3.86). 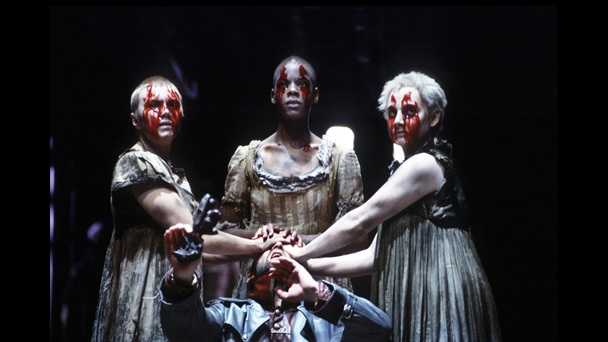 Many directors actually cut the last speech, making Malcolm’s triumph seem muted and uncertain, and intensifying our fears about the future of his reign. In Justin Kerzel’s 2015 film starring Michael Fassbender, the last line we hear is the rousing cry of ‘Hail, King of Scotland’, as Malcolm rides off the battlefield past the dead Macbeth. But Kerzel adds a troubling sequence where Banquo’s young son, Fleance, takes up Macbeth’s dagger and runs into the mist, as if to hunt down Malcolm. This is cut with flashbacks to Act 2, Scene 1, where Macbeth sees a vision of the dagger that will kill Duncan. So the story comes full circle, with the hint that Malcolm’s kingship is as vulnerable as his father’s, and as ‘fruitless’ as Macbeth’s (3.1.60).