Character analysis: Miranda in The Tempest

Lilla Grindlay explores the character of Miranda in Act 3, Scene 1 of The Tempest, considering language, form and a feminist interpretation.

PROSPERO [aside] Fair encounter
Of two most rare affections! (3.1.75)

Act 3, Scene 1 takes us to the romantic heart of The Tempest; it is the scene where the play’s two young lovers, Ferdinand and Miranda, confess their love and vow to marry. One is never far away from Prospero’s influence in this play, and this scene is no exception. Not only has he engineered their meeting – and Ferdinand’s rather bogus imprisonment – but the whole decorous exchange of the lovers also occurs, unbeknownst to them, under the watchful gaze of Shakespeare’s most over-protective father. Act 3, Scene 1 is where some of the play’s key themes, including imprisonment and control, romantic love and social class, all intersect. Shakespeare also develops the character of Miranda in this scene. The Tempest is remarkable for its absent women; Prospero’s adored daughter is the only human female inhabitant on an island which, in the wake of the shipwreck, has been increasingly populated by men. Her name means ‘wonder’, and she is cut from a similar cloth to the heroines of Shakespeare’s other late plays, Marina in Pericles and Perdita in The Winter’s Tale, as a chaste, beautiful and engaging young woman. Yet, as this scene reveals, her character is not without a certain complexity and bite. 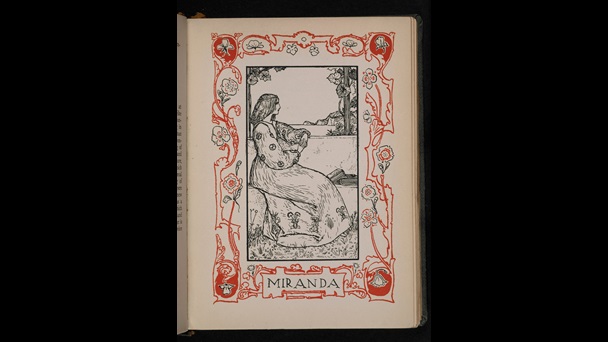 Miranda is described as a woman ‘of passion and imagination’ in this Victorian book on Shakespeare’s heroines.

The different styles of language that Ferdinand and Miranda use within this scene create a gentle tension between sophistication and innocence. Ferdinand’s elevated language constructs an idealised image of Miranda. She is ‘the mistress which I serve’ (3.1.6), who has the power to make ‘my labors pleasures’ (3.1.7). His ornate declaration of love shifts his literal imprisonment to a conceptual one:

The very instant that I saw you, did
My heart fly to your service, there resides,
To make me slave to it, and for your sake
Am I this patient log-man. (3.1.64–67)

Ferdinand’s fanciful description of his personified heart flying as a slave to his beloved places Miranda on a pedestal. His polished use of this elevated lexis also displays his noble status, as it employs a poetic style which was popular in the court in Shakespeare’s time. A similar effect is created by the elaborate hyperbole he uses to describe Miranda, who is ‘the top of admiration’ (3.1.38) and ‘So perfect and so peerless’ (3.1.47). Ferdinand’s alliteration here seems over-rehearsed, and his admission that he has admired several women before perhaps gives us the reason for this sense of polish.

Ferdinand is playing a courtly game, but Miranda is only just learning the rules, as her direct responses to his flattery reveal. Samuel Taylor Coleridge observed of Miranda that ‘she expresses all the delicacy of innocence, yet with all the powers of her mind unweakened by the combats of life’. In this scene, her words reveal this as she speaks with ‘plain and holy innocence’ (3.1.82). Ferdinand says she is the most beautiful woman he has ever seen, but she candidly admits that she cannot compare him with other men:

There is something ingenuous and touching about Miranda’s use of ‘good friend’, and it has the effect of comically undermining Ferdinand’s ostentatious protestations of love and service. It is Miranda who cuts to the chase with the monosyllabic ‘Do you love me?’ (3.1.67), and Miranda who moves the relationship to a marriage proposal: ‘I am your wife, if you will marry me’ (3.1.83). This refreshingly direct – even forward – declaration gives Ferdinand no chance to do the proposing himself. He attempts some ornate replies, but is asked, plainly and simply, for a confirmation of intent: ‘My husband then?’ (3.1.87).

Miranda’s direct style of speech reflects her innocent ignorance of the world of the court, and it also reveals a somewhat sassier character beneath her idealised surface. At the beginning of the scene, she offers to carry Ferdinand’s logs for him: with no knowledge of society’s codes concerning genteel female behaviour, she guilelessly claims, ‘It would become me / As well as it does you’ (3.1.28–9):

In the stage directions at the start of the scene, Ferdinand enters bearing just a single log, but Miranda’s use of the plural indicates that she may physically be the stronger of the two. Her repeated use of the imperative voice, and the ease and enthusiasm with which she offers to carry the logs indicate a certain energy and independence of spirit. Some performances, such as the 2013 version at Shakespeare’s Globe, have maximised the comic potential of this. Certainly, it lays the scene open to a reading of Miranda as a strapping country lass raised on fresh island air, a marked contrast to Ferdinand’s pampered physical form. This physical contrast can be seen as the embodiment of their different styles of language, further evoking the contrast between the world of the court and the world of the island. 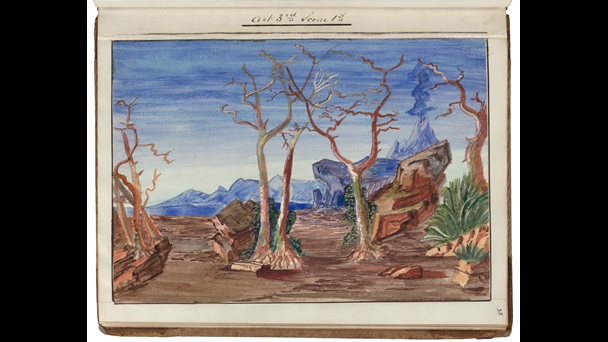 This is the watercolour set design for Act 3, Scene 1 – in front of Prospero’s cell – in Charles Kean’s lavish production.

The form of this scene tells us something very different, however, subtly revealing that the differences between Ferdinand and Miranda are really as illusory as one of Prospero’s spirits. In spite of Miranda’s use of plain and direct language, she only speaks in blank verse – a form she uses for the entire play. Verse is Shakespeare’s preferred form for his higher-class characters; it underlines here that for all its setting on a savage and isolated island, Miranda and Ferdinand’s courtship is one of equals in terms of class. Not only do the lovers speak in verse, but they also frequently share lines. There are other indications within Act 3, Scene 1 that this is a match of equals. The scene reaches a joyful climax when Ferdinand and Miranda exchange lovers’ vows. As they do so, their imagery fuses:

Miranda is beginning to absorb Ferdinand’s courtly style of speech; the touching metaphor of her heart within her hand is not unlike Ferdinand’s earlier descriptions of his heart flying to her service. Her speeches start to appropriate the language of service and self-abnegation that Ferdinand has earlier used, as she claims ‘I’ll be your servant’ (3.1.85) if she is rejected. She is, by nature, a noblewoman, and Shakespeare has already laid the foundations for this. In Act 1, Scene 2, when Prospero describes their past, Miranda’s sudden recollection, ‘Had I not / Four, or five, women once that tended me?’ (1.2.46–47) is a powerful image of high status. 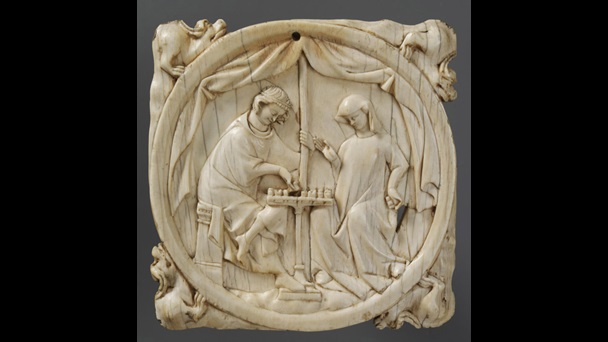 In Act 5, Scene 1, the couple play a flirtatious game of chess. This courtly pastime gave men and women freedom to meet on equal terms, in ways not otherwise permitted.

Miranda disobeys Prospero twice during this scene: she tells Ferdinand her name ‘O my father, / I have broke your hest to say so’ (3.1.36–37), and even believes she is rebelling by talking to him at all: ‘my father’s precepts / I therein do forget’ (3.1.58–9). Of course, Miranda’s rebellions against her father are imagined, for although it is mainly a dialogue between two lovers, Act 3, Scene 1 is not structured as a duologue. Prospero’s unseen presence on the stage is a visual reminder of his control over all the characters in the play, as master magician and stage director. There is a metatheatrical strand to this: as with so many episodes in The Tempest, we feel that Ferdinand and Miranda are actors playing the parts that Prospero has assigned them. 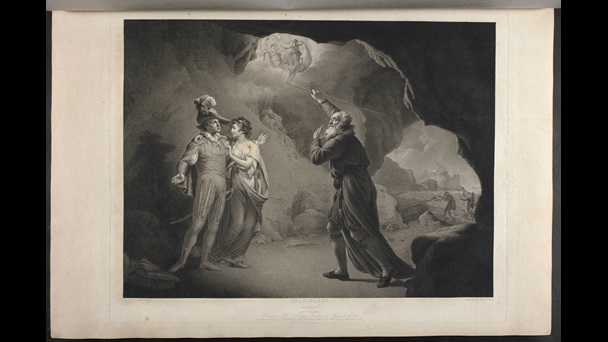 A feminist reading of Miranda: The value of virginity

An awareness of Prospero’s controlling presence can open up disturbing meanings when one considers the ideologies used to construct Miranda’s character. Earlier in the play, Prospero describes Miranda as a ‘prize’ (1.2.453), a metaphor which objectifies her as his property and assigns a certain value to her. His orchestration of her match to Ferdinand makes his daughter a pawn in a game to gain ultimate control over those who have wronged him. In Shakespeare’s time, a common law known as the femme couvert denied a woman independence by making her a moveable possession, to be passed from father to husband. Prospero’s actions are a subtle evocation of this exchange.

On another level, Miranda is a ‘prize’ because she is a virgin. Ferdinand overtly references this when they first meet, and he asks her, ‘If you be maid, or no?’ (1.2.428). ‘Maid’ here carries the meaning of wondering whether she is human or spirit, but Ferdinand’s later speech highlights the word’s more potent associations with chastity:

Embedded within the conditional ‘if’ is a powerful acknowledgement that Miranda’s virginity is a necessary aspect of a dynastic match. When Ferdinand and Miranda declare their love in Act 3, Scene 1, Miranda uses a metaphor which indicates her full knowledge of the cultural and ideological worth of her sexual purity:

The metaphors of wealth – ‘jewel’ and ‘dower’ – that signal Miranda’s ‘modesty’ imply that her virginity has monetary worth. Miranda’s allusions to this indicate that, in spite of her status as the play’s ingénue, she is acutely aware of the material value of the physically intact body that Caliban has failed to violate.

Allusions to Miranda’s unspoilt female body do not mar the overall joyful tone of this sweet little scene. The imprisonment of Ferdinand – unlike that of Caliban, and even Ariel – is really just a game, and the young lovers ultimately come out of it emotionally unscathed. It is a while before we encounter Miranda and Ferdinand again, but their future happiness is secure in the audience’s mind after their exchange of lovers’ vows. Like her subconscious absorption of Ferdinand’s courtly lexis, Miranda’s awareness of her virginity’s worth underlines an innate connection to a more sophisticated wider world. It allows the audience to accept the life that exists for her beyond the island, one which will take her to the very top of the social hierarchy.