Comedy, tragedy and gender politics in Much Ado About Nothing

Much Ado About Nothing pits male bonding against heterosexual relationships. Emma Smith examines this conflict and the ways in which it threatens the play's status as comedy.

The sparkling relationship between the witty lovers Beatrice and Benedick has made Much Ado About Nothing one of Shakespeare’s most enduring romantic comedies. Shakespeare here suggests that the obstacle to romantic love is not external – there are no women in men’s clothing or tyrannical patriarchs here – but rather psychological. In a strikingly modern scenario, the real block that needs to be overcome is the characters’ own resistance to commitment and their fear of vulnerability. But a different threat to comic fulfilment also needs to be managed. It is represented in the play by Don John, the melancholic and illegitimate brother of Don Pedro, who plots twice to interrupt the marriage of the ‘young start-up’ Claudio to Hero. 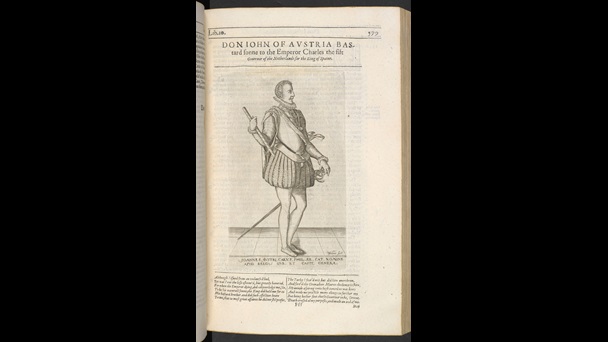 Shakespeare’s first audiences might have made a link between the fictional Don John and the real Don John of Austria, the ‘bastard’ son of the Holy Roman Emperor, Charles V.

Don John credits Claudio with ‘all the glory of my overthrow’ (1.3.67), thus framing his own destructive behaviour within a network of rivalrous male relationships. We tend now to think of romantic comedy as a genre consumed by women, but in the early modern period it was directed at young men. Even while they ultimately endorse male-female relationships, comedies are often preoccupied with male-male bonding: think of Antonio and Bassanio in The Merchant of Venice, or those two gentlemen of Verona, or even Orsino and Cesario in Twelfth Night. The same is true here. Early in Much Ado, Don Pedro tells Claudio that he will woo Hero on his behalf – part of the play’s persistent pattern of substituting male-male relationships for male-female ones. The wooing of Hero is a negotiation between Claudio, Don Pedro, and Leonato, with Hero herself barely figuring. Don John pretends that his brother has broken faith with Claudio who is immediately convinced that ‘Tis certain so; the prince woos for himself’. But he follows this quickly with the reassuring certainty that the Prince’s double-dealing is not quite his fault: ‘for beauty is a witch / Against whose charms faith melteth into blood’ (2.1.179–80). It is already Hero’s fault, even though she hasn't done anything.

Monkeys and Cats at a Masked Ball 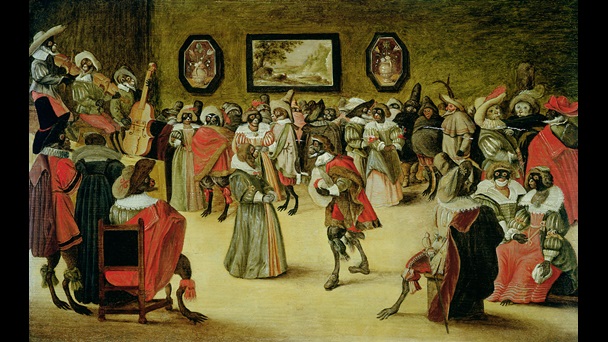 Don Pedro woos Hero on Claudio’s behalf at the masked ball in Act 2, Scene 1. This unusual Flemish oil painting of 1632 might help us imagine the confusion of that scene.

Don John is sometimes seen as a Shakespearean dry run for the malign energy of Iago in Othello, another play about male bonding and destructive sexual jealousy. He is, however, different in one crucial respect. Whereas Iago tricks everyone around him into believing his honesty, Don John seems incapable of dissimulation: ‘I cannot hide what I am: I must be sad when I have cause, and smile at no man’s jests’ (1.3.13–14). As a self-proclaimed ‘plain-dealing villain’ (1.3.32), Don John’s conduct is clear. And yet, the paradox of the play is that he is consistently believed by the other men. After his first attempt to spite Claudio at the ball fails, he tries another trick. He promises to show Claudio and Don Pedro a dumbshow at Hero’s window in which her infidelity will be displayed. ‘If I see any thing to-night why I should not marry her,’ vows Claudio, ‘to-morrow in the congregation, where I should wed, there will I shame her’ (3.2.123–25). Don Pedro agrees – the relationship between Claudio and Hero is in fact a relationship between Claudio and Don Pedro: ‘And as I woo’d for thee to obtain her, I will join with thee to disgrace her’ (3.2.126–27). Again, a relationship between Claudio and Hero turns out to be a relationship between Don Pedro and Claudio. 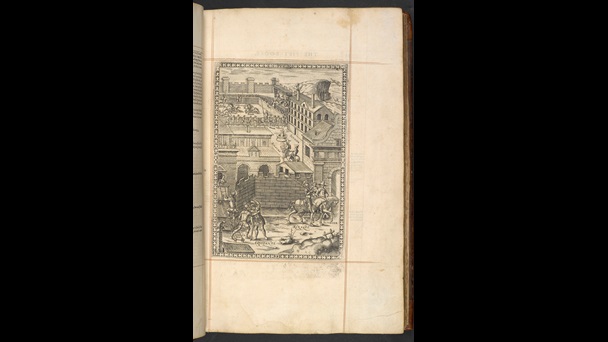 Harington’s English translation of Orlando Furioso may have been a source for Shakespeare’s plot. This engraving from that book shows the disguised maid at her mistress’s window, as the villain climbs his ladder.

‘Give not this rotten orange to your friend’

Shakespeare does not allow his audience to see the spectacle of Hero’s apparent transgression. Interestingly, those stage or film productions of the play that want to be sympathetic to Claudio do tend to depict the scene at her window to suggest that the trick was a convincing one and therefore he should not be judged too harshly. But by leaving it out, Shakespeare suggests that the men have already made up their minds. The scene of Claudio and Hero’s interrupted wedding shows how the male characters, even her father, line up behind the angry groom, who rejects his bride in terms that confirm that she is a transaction between the play’s menfolk: ‘Give not this rotten orange to your friend’ (4.1.32). Leonato wishes his daughter had not been born. Only Beatrice is utterly loyal to her cousin. And Benedick is forced to prove himself by aligning himself with her, rather than with his male friends. Their unconventional declaration of love makes it clear that male bonds are incompatible with heterosexual partnership. ‘Come, bid me do any thing for thee’ (4.1.288), offers Benedick in the heady expansiveness of acknowledged love. Beatrice’s reply is deadly: ‘Kill Claudio’. The choice is painful, but inevitable.

Photograph of Much Ado About Nothing performed at Shakespeare's Globe, 2011 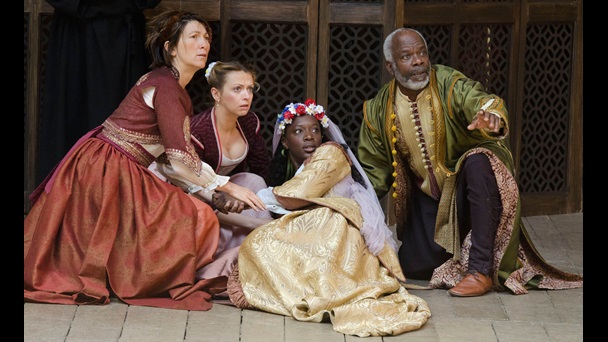 For all that romantic comedy brings male and female worlds into happy collision, here in Much Ado those gendered worlds are constantly set apart. At the wedding that ought to join man and woman together, sexual politics are at their most sharply opposed. Perhaps one element of Shakespeare’s changing concept of the shape of his play is relevant here: the first quarto of 1600 begins with an entrance for Leonato and ‘Innogen, his wife’. Innogen is a ghost character, apparently part of Shakespeare’s original conception of the family unit but one who was revised out of the narrative as it proceeded, without fully excising her from the beginning of the draft. In his sources, Shakespeare found a maternal figure who was active in recuperating her daughter’s slandered reputation: by cutting that support he emphasises the gendered isolation of Hero and Beatrice in the male-dominated world of Messina.

Quarto of Much Ado About Nothing, 1600 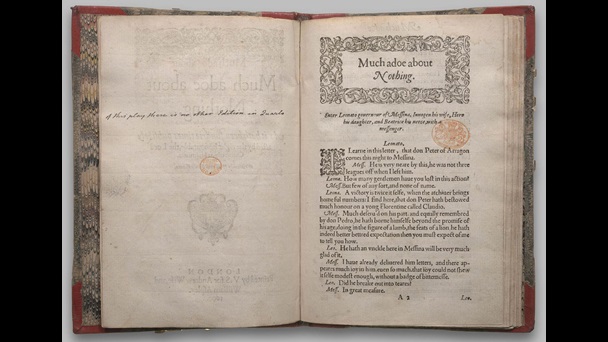 The first quarto of the play (1600) begins with an entrance for Leonato’s wife ‘Innogen’ – a mother figure who ultimately plays no real role in the narrative.

Shakespearean comedy is a world in which women’s desires and agency tend to triumph – whereas tragedy is a largely masculine sphere in which women are structural subordinates (think of Ophelia, or even Desdemona). The spoilt wedding in Act 4 of Much Ado – the scene with which a comedy ought to conclude – suggests a kind of generic malfunction. The spectre of male jealousy preoccupied Shakespeare across genres (Othello, The Winter’s Tale), because it seemed to have the potential to divert a narrative to an unexpected conclusion. As Hero is left in a swoon after Claudio’s denunciation of her in front of the wedding guests, Much Ado’s plot flirts momentarily with tragedy. A friar steps forward with a great idea for the wronged woman to pretend to be dead – at a time when Romeo and Juliet was one of Shakespeare’s best-known plays, this solution was unlikely to be entirely reassuring to audiences. 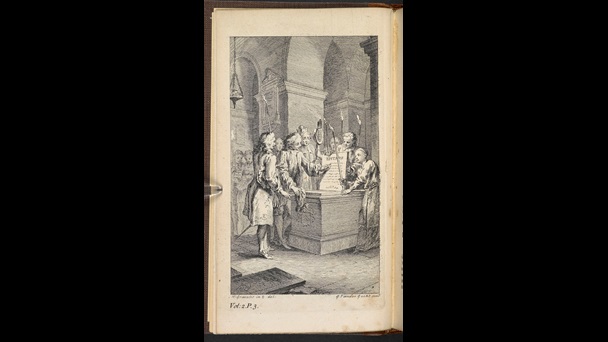 This gloomy engraving highlights the potential tragedy of Much Ado About Nothing.

But the ultimate insulation against tragedy is both structural and theatrical. On either side of the proto-tragic wedding scene we get the funny scenes with the Watch: the haplessly amateur constables who, almost in spite of themselves, are the agents of comic deliverance. On the early modern stage, one of their number in particular would have signalled clearly the overall direction of the play. In the quarto text, the pompous malapropistic character Dogberry is given the speech prefix ‘Kemp’. The presence of the star comic actor Will Kemp in this role serves to suggest that nothing can seriously go wrong here. The Watch foil the attempt to sabotage Claudio’s marriage, just as Will Kemp’s improvisatory comic verve will always outdo Don John’s wooden wickedness. We are, after all, in safe generic hands.

Broadside ballad on the Master Constable The Master Constable in this ballad is described as a pompous ‘asse’ like Dogberry. 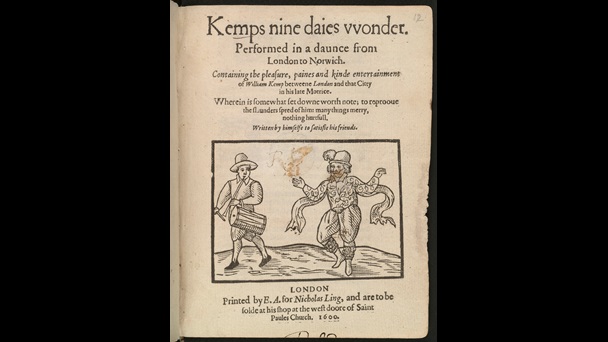 Dogberry would have been played by Shakespeare’s star comic actor, Will Kemp.

Although the straightforwardness of relationships between men is irreparably damaged by the events of the play, it could be argued that male camaraderie prevails. Much Ado continues to be profoundly uneasy about female sexuality and its assumed duplicity. Even after Hero’s infidelity has been revealed as a piece of Don John’s Machiavellian theatre, the jokes about cuckoldry are still the currency of male interchange. ‘Prince, thou art sad’, Benedick notes of the match-maker Don Pedro, ‘get thee a wife. There is no staff more reverent than one tipp’d with horn’ (5.4.122–24). It’s significant that the play’s last lines equate marriage with the inevitability of female unfaithfulness, before turning final attention back to Don John, whose own malevolent illegitimacy might be thought a kind of proof that women can – and some do – sleep with men not their husbands.

This archetypal romantic comedy, then, looks backwards to the more obviously problematic gender politics of The Taming of the Shrew, just as it looks forward to Shakespeare’s ongoing interest in male rivalries and sexual jealousy. It achieves its own romantic outcomes by defeating not just psychological resistance but the blocking structures of male bonding. And that victory is itself questionable. Most editions of the play transfer the line in the final scene ‘Peace, I will stop your mouth’ (5.4.97) from Leonato to Benedick, interpreting it as a cue for a kiss. So is the silencing of the play’s witty female character the final, mutual expression of romantic fulfilment? Is it an assertion of male dominance over women? Or is it a more coercive or ominous gesture about Beatrice’s future role in her marriage? Within Much Ado’s wit and sunny energy is a darker, Don-John-authored and misogynistic play that cannot be fully suppressed.

More on this topic in my podcast in the ‘Approaching Shakespeare’ series from iTunesU or podcasts.ox.ac.uk