Dream, illusion and doubling in A Midsummer Night's Dream

Having one actor play more than role was convenient for Shakespeare, whose acting company was limited in size, but doubling also enabled him to intensify the atmosphere of his plays, and to make connections and contrasts between scenes and storylines. Emma Smith explores the way that the doubling in A Midsummer Night's Dream heightens the play's dreamlike and fantastical elements.

Shakespeare’s acting company, the Chamberlain’s Men, employed a regular troupe of around 12 men and four boys. But Shakespeare’s plays typically involve up to twice as many characters. The construction of his plays makes evident that he was always conscious of the solution: doubling, the practice by which a single actor could take on more than one role in the play. At its simplest, all this requires is that the doubled characters do not appear in the same scene, and that there is time between one character’s exit and the actor’s next entrance for any necessary costume changes. However, doubling was not simply a practical necessity, but a representational technique that could also make connections and contrasts between distinct characters or worlds.

The interpretative implications of actors doubling have their most interesting exploration in A Midsummer Night’s Dream. It seems likely that the Athenian court of Theseus and Hippolyta would have been doubled in the fairy world of Oberon and Titania, and that the master of the revels Philostrate might well have reappeared in the woods as his mischievous alter ego Puck or Robin Goodfellow. (Peter Brook’s landmark production at Stratford in 1970 revived these doublings for the modern theatre.) Perhaps even the fairies Peaseblossom, Cobweb and their fellows are doubled with a similar sized group who operate in a distinct part of the play: those ‘rude mechanicals’ who are rehearsing ‘Pyramus and Thisbe’. Everyone, it seems, in Dream is always someone else as well. 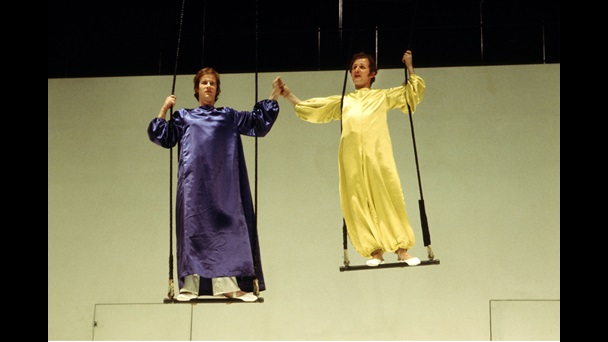 Peter Brook’s 1970 production of A Midsummer Night’s Dream dazzled audiences with a ground-breaking new interpretation. The result, in the words of one critic, was ‘a box of theatrical miracles’.

The Merry conceited Humors of Bottom the Weaver, 1661 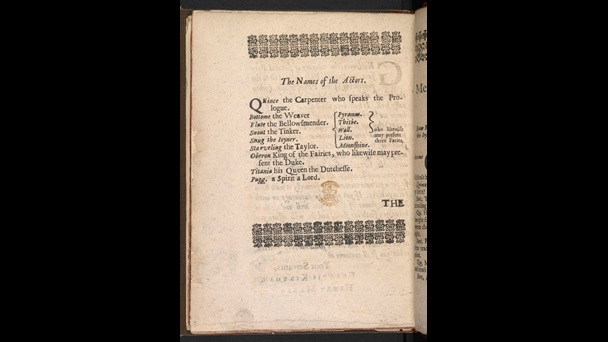 A list of Dream characters showing the doubling of parts.

Doubling these characters opens up a number of suggestive readings of the text, many of which chime with more modern ideas about the work of dreams. Freud wrote in his The Interpretation of Dreams that in a dream ‘one person can be substituted for another’: perhaps the fairy world is the unconscious of Athens, where the repressed anger of Theseus’s domination over his captured Amazonian bride breaks out into the quarrel between Oberon and Titania, and where the stifling patriarchy represented by Egeus’s ultimatum of obedience or the convent is swept aside for the thrilling dangers of sexual freedom. In the topsy-turvy dreamscape of the woods, lovers swap allegiances and the fairy queen couples with a donkey-man: the dark side of romantic desire is revealed to be disturbingly carnal. Bottom recalls his erotic encounter with Titania in her bower as ‘a dream, past the wit of man, to say, what dream it was’ (4.1.205–06). Awaking from a dream that is more akin to a nightmare, Hermia ‘quake[s] with fear’ to recall a distinctly phallic snake that ‘eat my heart away’ (2.2.148–49). The action of the play, framed in the opening scene as the frustrating infill before the marriage night of Theseus and Hippolyta, reveals that sexual desire is troublingly anarchic and urgent – threatening the play’s own generic movement towards romantic comedy ending in multiple marriages.

Photograph of Vivien Leigh as Titania from A Midsummer Night's Dream, 1937 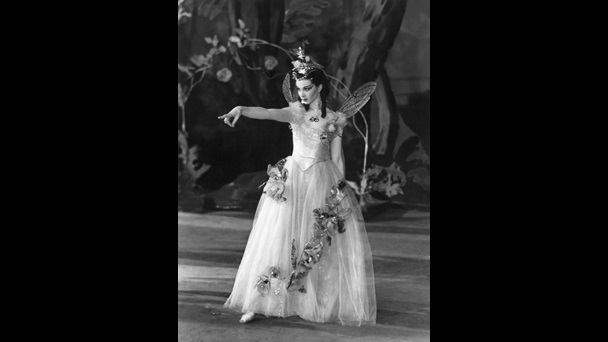 Vivien Leigh starring as Titania in A Midsummer Night's Dream in 1937.

Usage terms Courtesy of the Mander and Mitchenson collection at the University of Bristol and ArenaPAL www.arenapal.com Victorian illustrated editions of Shakespeare’s plays neutralised the erotic charge of this play, rewriting it to make its fairies dainty creatures from the nursery and establishing A Midsummer Night’s Dream as a play particularly suitable for children. They couldn’t have been more wrong. Shakespeare makes his love-potion derive from a flower transformed by Cupid’s arrow into the distinctly suggestive ‘before milk-white, now purple with love’s wound’ (2.1.167). An illustration of Robin Goodfellow from the 1620s shows a hairy-legged satyr sporting an impressive phallus: to be puckish in the early modern period was thus to be involved in sexual, rather than innocent, forms of mischief. The Polish director and critic Jan Kott saw A Midsummer Night’s Dream as ‘the most erotic of Shakespeare’s plays’, but he saw this as a dark force: ‘in no other comedy or tragedy of his, except Troilus and Cressida, is the eroticism expressed so brutally …The lovers are exchangeable. The partner is now nameless and faceless. He or she just happens to be the nearest’. The love-tragedy performed at the end of the play for the marriage celebrations, ‘Pyramus and Thisbe’ is often hilarious on stage, but it, too, offers a kind of structural or generic double. The tragic outcome for these performed lovers hints at the darker associations of sex and death, the unacknowledged or suppressed dream unconscious of romantic comedy. 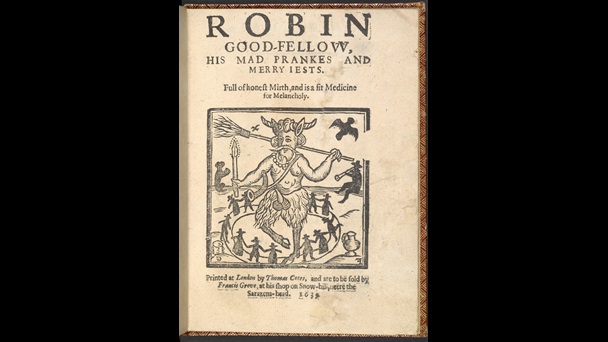 The folkloric figure Robin Goodfellow depicted with horns, goat legs and a phallus.

Reviewing their adventures in the woods, Hermia reflects that ‘Methinks I see these things with parted eye, / When everything seems double’ (4.1.188–89). Everything does indeed seem double in a plot marked by duplications rather than by distinctiveness. By mistakenly applying a love-potion to the eyes of the male Athenians, Robin Goodfellow confuses the play’s couples, making both Lysander and Demetrius turn their attentions from Hermia to Helena. The strong suggestion here is that the lovers are interchangeable: the convention of ‘love at first sight’ is being satirised. Demetrius has turned from Helena to Hermia back to Helena again (perhaps still under magical influence); Lysander turns from Hermia to Helena back to Hermia. These confusions, however, merely amplify the play’s apparent disinclination properly to distinguish between the two men or to establish them as significantly different characters. Hermia is willing to enter a convent rather than marry her father’s choice, Demetrius, but the play does nothing to indicate why she should so strongly prefer Lysander. Even Hermia herself is able only to claim that Lysander is just as good as Demetrius. ‘Demetrius is a worthy gentleman’, Theseus admonishes. ‘So is Lysander’, she replies (1.1.152–53). A lust-causing plant in a 16th-century herbal.

Usage terms The printed text is Public Domain.
The handwritten annotations are Public Domain in most countries other than the UK.

The fact of actors playing dual roles makes doubleness part of the imaginative technology of the play in performance; the apparent swappability of the lovers introduces doubleness as one of its thematic challenges to romantic comedy. At the micro-level, the language of the play is also preoccupied with the same structural ideas. Over half the lines in A Midsummer Night’s Dream are rhyming (across Shakespeare’s plays only Love’s Labour’s Lost has a higher proportion). This high proportion of rhyme goes along with repetitive rhetorical structures such as parallelism (repeating the same grammar, rhythm or construction), and a more specific rhetorical device, isocolon (repeating syntactic structures of the same length). In this example from the play’s first scene, we see parallelism, isocolon and rhyme working together to emphasise the mirroring or doubling of the two female characters:

Just as Freud later identified the dreamworld as place ‘where ideas can be linked by verbal similarities’, so these rhyming and parallel lines are a good example of the way in which Shakespeare’s sentence- or speech-level construction often echoes in miniature the wider concerns of his plays. 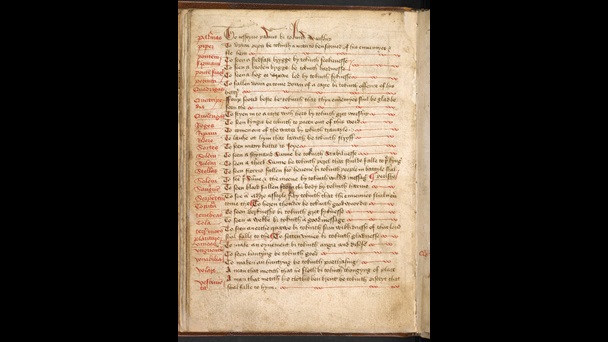 A guidebook for interpreting dreams, showing the relevant entry for Hermia’s dream of a snake.

In A Midsummer Night’s Dream almost every character falls asleep at some point, thus rasing the possibility that what happens afterwards is their dream rather than reality. In the sequence of awaking at the end of Act 4, where Titania, the lovers and then Bottom are all roused from sleep, Demetrius wonders about the distinction between sleeping and waking: ‘Are you sure / That we are awake? It seems to me / That yet we sleep, we dream.’ (4.1.192–93) Bottom boasts that the heroic version of his own exploits will be called ‘Bottom’s Dream’. And in the epilogue which ends the play, Robin Goodfellow suggests that the real sleepers were the audience:

If we shadows have offended,
Think but this and all is mended:
That you have but slumbered here
While these visions did appear.
And this weak and idle theme,
No more yielding but a dream.   (5.1.423–28)

The whole play, Robin suggests, is our dream – like modern Hollywood, the early modern theatre is a kind of dream factory, providing theatregoers with an escapist fantasy from which they only reluctantly awake to return to their humdrum lives.

Dream theory: illuminated manuscript of Macrobius’s Commentary on The Dream of Scipio This influential classical treatise considers the relation between dreams and reality.

Photograph of A Midsummer Night's Dream directed by Peter Brook, 1970 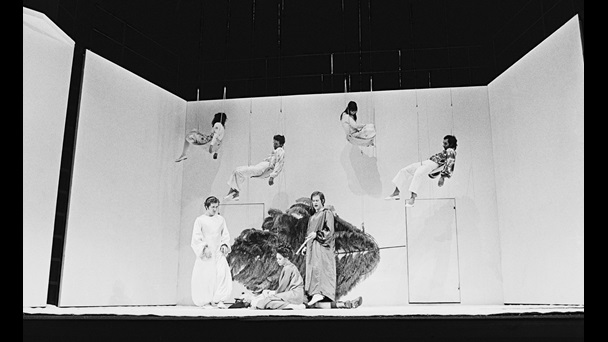 For modern viewers brought up on Freudian ideas about dreams, A Midsummer Night’s Dream’s repeated games with doubleness and illusion seem strikingly contemporary. But the Elizabethans had their own book entitled The Interpretation of Dreams, published in 1576 by Thomas Hill. Early modern dreams tended to be understood as premonitions, but at least one contemporary saw them as processing the psychic overload of waking life: dreams were, for Thomas Nashe, ‘nothing else but a bubbling scum or froth of the fancy, which the day hath left undigested; or an after-feast made of the fragments of idle imaginations’. In terms reminiscent of the play, he identifies the dream as ‘moonshine on a wall’: unremarkable elements transformed by imagination – just like the theatre itself. The theatre is to reality what the dream is to waking: what’s so striking about A Midsummer Night’s Dream is the way it dissolves both these boundaries.

The Terrors of the Night by Thomas Nash, 1594 Nashe’s sceptical dismissal of dreams and fairies as ‘fragments of idle imaginations’.