Exploration and trade in Elizabethan England

The Treaty of Tordesillas and after

The story began in 1494, when Spain and Portugal divided the New World between them, with the Pope’s approval. He drew a line down the Atlantic, between the Americas and Africa, so that North and South America fell to Spain, except for the eastern corner of South America (Brazil), which fell to the Portuguese. 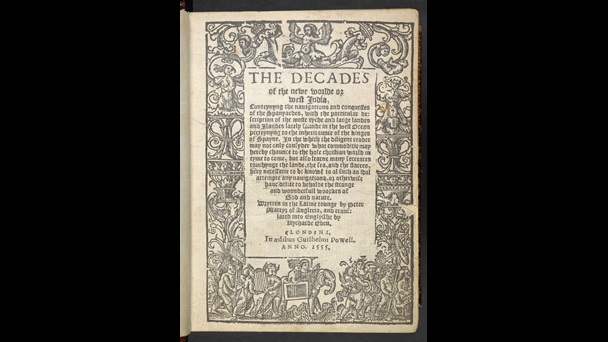 Richard Eden’s Decades of newe worlde (1555) is an English translation of Martyr’s collection of tales from Spanish explorers, including Christopher Columbus.

Spain did well out of the treaty. Columbus had already, in 1492, discovered Hispaniola (now Haiti and the Dominican Republic) and other Caribbean islands. Spanish power was established in Central America, including Panama, and the north and western coasts of South America, after the conquest of the Aztec and Inca empires. ‘The Spanish Main’ – the north coast of South America – and the islands yielded pearls, gold and gemstones, but the biggest stroke of luck was the vast silver mine at Potosi, in Peru. By 1545 its production was being shipped to Spain as 'pieces of eight' in such quantities that European commerce was transformed.

The Portuguese had already established trading posts down the west coast of Africa. By 1600 they had contacts on the east African coast, Macao, India, Ceylon and ‘the Spice Islands’, Sumatra and Java, with other islands in the East Indian archipelago, as well as the southern end of the Burmese peninsula and Japan. They monopolised the profitable spice trade. But the Dutch rebellion against the Spanish was gathering strength. From 1598 the Dutch, and occasionally the English, attacked the Spanish/Portuguese far eastern empire as part of their campaign against Spain, with a view to capturing the spice trade. (Spain had annexed Portugal in 1580, but left the administration of Portugal’s far eastern empire in Portuguese hands.)

Engravings of Native Americans and Europeans in de Bry's America 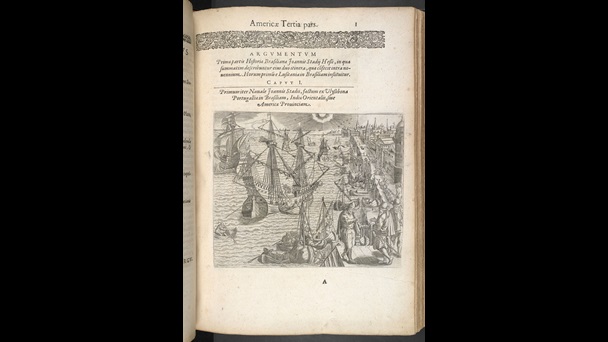 Ships setting sail for the Portuguese colony of Brazil, from a richly-illustrated collection of travel narratives, compiled and engraved by Theodor de Bry.

One of the first explorers to catch the public interest was Martin Frobisher, who led three expeditions (1576–78) in search of the north-west passage which he was convinced existed round the north of the American continent and then west and south to the riches of Asia. But it eluded him, and the ‘gold-bearing ore’ he brought back produced only heated argument.

An alternative route might lie round the north of Russia. Richard Chancellor had sailed to Archangel in 1553 and travelled overland to Moscow, where Ivan IV, called ‘the Terrible’, gave him favourable trading terms. (This was the Tsar who later offered Elizabeth matrimony: an offer she refused, while accepting the sumptuous furs that came with it.) The Muscovy Company, incorporated in 1555 as the first English joint-stock company, pushed south to Astrakhan, and on to Persia, trading English cloth for oriental silks and spices arriving via the Silk Road. Another joint stock company, the Turkey Company, opened trading relations with Baghdad, and prospected an overland route to Bengal, Burma and Siam. But the overland route to the East was too vulnerable to be practicable. The only way to India and the Spice Islands had to be by sea.

Elizabeth had no money to fund a world-wide colonising campaign, and she could not afford to be seen openly encouraging attacks on Spanish and Portuguese possessions, but she was quite prepared to subsidise foreign trading ventures by her subjects, as long as she shared in the profit.

The most famous explorer of them all was Francis Drake. From 1572–73 he harried the Spanish treasure ships, even ambushing a mule train laden with bullion from Peru as it crossed the Panama isthmus. In 1577, fired by accounts of fortunes to be made in foreign lands, he set out to circumnavigate the earth. His route lay south-west across the Atlantic, round the Cape Horn by the channel that Magellan had pioneered, then up the west coast of South America, pausing from time to time to sack a Spanish town or capture a Spanish treasure ship. Perhaps still searching for that elusive north-west passage, he sailed up the coast of North America, until at about the latitude of [modern] Los Angeles he changed course, to catch the trade winds west across the Pacific, towards the Spice Islands, pausing there to recondition his ship and load a precious cargo of cloves. Then he headed across the Indian Ocean, round the Cape of Good Hope, up the coast of Africa and home. He had begun with five ships. Even by the time he reached the Magellan Straits he was reduced to only one ship, which he renamed the Golden Hind, and his crew was riddled with scurvy and mutiny. With her gift for public relations, the Queen knighted him on the deck of the Golden Hind when he returned in 1581. Other nations, particularly the Portuguese, had circumnavigated the world before him, but Drake’s achievement – in his tiny, indomitable ship, only 70 feet long and 19 feet wide – was still astounding.

In 1583 Humphrey Gilbert discovered the island of Newfoundland, and claimed it for England. It was, and is, a bleak land with an inclement climate, but the cod which then abounded off its shores promised a steady income in those fish-eating days, admittedly less romantic than the gold and jewels of the Spanish Main but at least validly claimed by the English. Newfoundland was England’s first colony in the New World. A great lord of Virginia, by Theodor de Bry. These engravings of Native Americans were based on John White’s paintings of Roanoke Island.

In 1584 Walter Ralegh settled a small colony on the island of Roanoke (just south of modern Williamstown in North Carolina, USA) but it was poorly planned and provisioned; by 1590 it had vanished without trace. Further attempts to settle an English colony in the New World came to nothing during Elizabeth’s lifetime. In any case, by 1587 any idea of planting foreign colonies had to give way to the need to devote shipping and experienced seamen to defeating Spain. It was not until 1607 that the colony of Virginia was successfully established, four years after the death of Elizabeth the Virgin Queen, but named in her honour. 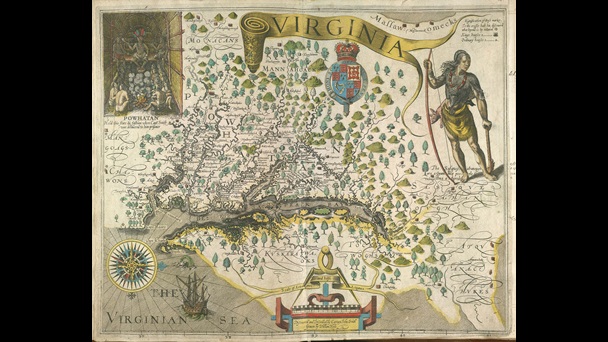 Hand-coloured map of Virginia, one of earliest English colonies established under James I.

In 1562 John Hawkins identified a new and profitable commodity: African slaves. The Spanish New World colonies needed labourers to replace the indigenous Amerindians, who were being killed off by European diseases. Hawkins developed the ‘triangular trade’. He bought or captured men and women from Africa, whom he sold to the Spanish colonisers in America, in exchange for Spanish gold and gemstones, which he sold in England. The Spanish resented this intrusion into their markets, and Hawkins had to give it up after a few years, but the precedent had been set for a sinister trade that brought fortunes to British slavers until its final abolition in the British Empire, in 1807.

The Hanseatic merchants had had a special relationship with England since the 12th century. They had a monopoly of English trade with the Baltic, importing the hemp for ropes and sail cloth and timber for ships, both vital to English defences, and grain which they sold at high prices when English harvests failed. Their favourable tax status made them even more unpopular. At last, in 1598, their privileged position ended and they were banished, leaving the Baltic trade open to English merchants.

Wool had been England’s main export for centuries. In about 1585 the European market for this and every other commodity shifted from Antwerp to Amsterdam, which became the mercantile centre of the world. Here an English merchant could trade wool and woollen cloth, for Russian furs and Chinese silk, lapis lazuli from Afghanistan and alum from Italy, far eastern spices and wines from Portugal, the Rhineland and France. There was of course no common currency. International finance was in the capable hands of Genoese bankers. In his Firste Fruites (1578), John Florio describes the many English merchants who traffic their goods throughout the world.

No account of Elizabethan exploration is complete without mentioning Hakluyt. Without his urging, the English might have been content to rest in their foggy off-shore island while the Spaniards and Portuguese divided the world between them. But far from it: in 1584 Hakluyt prepared a ‘Discourse on Western Planting’ for Ralegh to present to the Queen, arguing that Spain’s domination of the New World was limited; there was space enough for English colonies there, which could not only increase her foreign trade but also provide useful repositories for the idle and criminal surplus population, even then seen to be a problem. Although Roanoke failed, it prepared the way for the successful settlement of Virginia. In 1589 Hakluyt published The Principal Navigations, Voyages and Discoveries of the English Nation, with a much expanded edition in 1598–1600. His books revolutionised the idea that Englishmen had of themselves. The stories of sailors and explorers which Hakluyt collected from their very lips were as inspiring as any words written by Hakluyt’s contemporary, Shakespeare. He was buried in Westminster Abbey.