The wealthiest Elizabethans ate lavish meals of many courses, while many poorer people didn’t even have their own ovens, and some of the poorest survived on leftover scraps from the rich. Liza Picard describes how class, religion and politics all influenced how Elizabethans shopped for food, cooked and ate.

An Elizabethan’s diet was ruled by the calendar. Wednesdays, Fridays and Saturdays were fish days, so was the whole of Lent and various other days – almost a third of the year. But ‘fish’ included veal, game and poultry, and if you really couldn’t do without beef you could buy a ‘flesh-eater’s licence’, or get round the rules in other ways.

In the words of an Act of 1563, fish days were ‘for the better maintenance and increase of the Navy…and not for any superstition…(nor) for the saving of the soul of man’ – as they had been in the previous reign. In the 1588 Armada crisis, only 34 ships out of the total English fleet of 226 belonged to the Queen. All the rest were merchantmen manned by fishermen and Thames watermen, with other civilian mariners. So the fishermen were kept in employment by all this fish eating.

Generally only freemen of London were allowed to sell in the markets. Countrymen from outside London had very limited rights. There were markets scattered throughout London; a housewife did not have far to walk to do her daily food shopping. The markets were all controlled by the Lord Mayor, who kept an eagle eye out for any offences, especially any kind of profiteering. They were open six days a week, from 6 to 11 in the morning and 1 to 5 in the afternoon. Sunday trading was limited to perishables such as milk, fruit and vegetables, in the early morning.

Bread was strictly controlled, both in quality and price. A good place for fish was Billingsgate Market, near London Bridge, where you might pick up some Kentish fruit in the season, too, or some salt from France. There were rows of butchers’ stalls within reach, everywhere. Non-perishables such as the sand used for household cleaning, and sugar planed off a sugar-loaf in the quantity and quality needed, were sold in shops. Some shops were tiny, only a yard wide. But the customer would not expect to go in – there would hardly be room for her if she were wearing a farthingale. She would stand outside, telling the apprentice what she wanted. 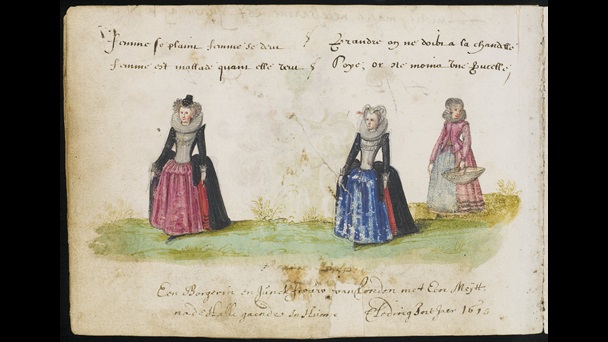 She might prefer to wait at home until a street seller came round. They sold fish, and fruit, and fresh vegetables and sausages, and baked apples and highly seasoned pies. 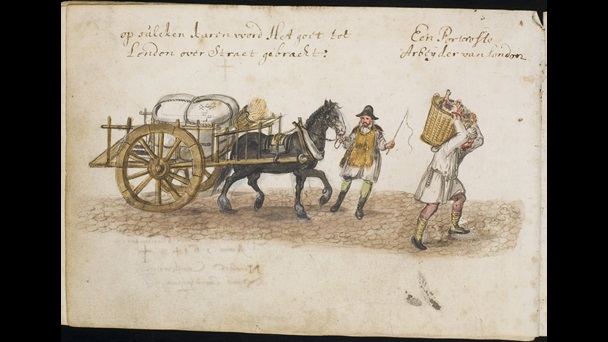 Men carry meat and other wares through the streets of London.

Held by© The University of Edinburgh

For a poor person living in one room, with only a small open fire if she was lucky, fast food from a cookshop must have been a blessing. Oysters fresh from the boats moored midstream by Billingsgate were sustaining, and cheap.

The best place for a really good meal was a livery company. The Drapers’ Feast in 1564 lasted for three days. The members and their 89 guests disposed of 40 bucks (male deer), a sturgeon, and miscellaneous birds, from swans to larks, as well as exotic jellies and sweetmeats.

The main meal in wealthy households was midday dinner. Nobles, gentlemen and merchants would sit down about eleven o’clock. The table would be set with ‘the first course’ of soup, boiled and roast meat, chickens and pies and a sweet custard. They were replaced with another course, perhaps roast lamb and capons, rabbit, venison and a tart. Then in case anyone was still hungry, quails and larks and deer pasties and gingerbread and fritters. How anyone could contemplate, let alone consume, such a meal is incredible to the modern mind. And I haven’t mentioned the rich sauces with each dish, nor the vegetables and fruit.

But, undeterred, they sat down again at six, for supper.

At least the ‘full English breakfast’ had not yet arrived. People ‘broke their fast’ (the origin of the word 'breakfast') in the morning with a little weak beer, and a slice of bread and butter.

Not every house had an oven. It was quite usual for the housewife to send a pie or a cake round to the baker, when she heard the baker’s apprentice shouting ‘come to the bakehouse’, while his master’s ovens were still warm from baking the day’s bread. She might also take him a joint which she had wrapped in a hard ‘coffin’ of pastry, not intended for eating but to stop the joint from drying out, as we would use foil wrap. In her own kitchen, she cooked at the open fire, spiking joints and birds on to spits strong enough for a whole swan, or small enough to hold larks. The spits were turned by a small boy, or a dog running endlessly round in a wheel, or by an ingenious device called a spit-jack, using the heat of the fire. Vegetables were boiled in a cauldron over the fire. Fish were fried in butter. The cook needed long-handled spoons and skimmers and ladles. For special little dishes she would use a small ‘chafing-dish’ over a brazier.

Everything was highly seasoned. It is sometimes suggested that the seasoning was to disguise the taste of food that had begun to rot, in those pre-refrigeration days; but perhaps the Elizabethans simply enjoyed the taste of sugar and ginger and cinnamon with cream, in a pudding, and oranges, sugar, cloves, mace, pepper and more cinnamon, with a chicken.

How did poor people fare? Even pies and tarts from a street seller could be beyond their means. In the old days they could have relied on the leftovers from monasteries and convents, now long gone. But the remains of meals in the big houses and the livery halls were still distributed to the poor, once all the servants had had their pick, and trimmings and oddments might be given away at the end of the trading day, by the fishmongers and the butchers.

Forks were still rare. Everyone would carry a small knife for use at table, and there would be a spoon at each place. Water and a towel were ready for you to wash your hands before sitting down. Be careful to sit in the right place. In rich households there would be an elaborate salt cellar on the table, sometimes in the form of a ship a foot high or more. The master and his guests and family sat ‘above’ the salt, at the top of the table. Lesser mortals sat further down.

After grace, a gentleman’s upbringing was tested; he had to know how to carve all the birds and joints and fishes on the table. Not only that, he had to know the right terms to describe the process – ‘rear that goose, alay that pheasant, undertranch that porpoise…’

Ale or beer (ale flavoured with hops) was safer to drink than water, and probably tasted better. Most households brewed their own. Wine was drunk at formal meals. The custom was to ‘pledge’ a fellow guest, who thanked you by pledging (toasting) you back. There was no glass at your place. You asked the servitor for wine, he filled a glass and gave it to you, you drank and handed it back. The servitor rinsed it in a wooden basin and replaced it on the ‘buffet’ (sideboard). The wood was to protect the glass. Delicate Venetian glass was more highly prized than gold or silver cups.

Wine was imported from Spain, Greece, France, Madeira and other countries. Some was produced from English vineyards.

Queen Elizabeth was fond of metheglin, distilled from honey and herbs. Mead was metheglin without the herbs. Cows’ and ewes’ milk were good for old men and children, but not for those who have ‘gurgulations in the belly’.

Broadside ballad 'A Bill of Fare' 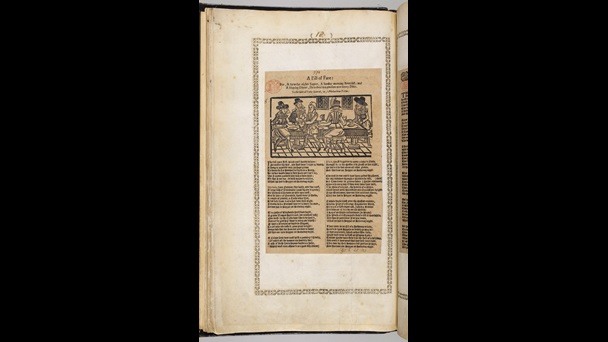 A 17th-century song about a feast.