Measure for Measure: Symmetry and substitution

The title of Measure for Measure suggests the play's concern with equality and exchange. Emma Smith discusses how Shakespeare explores these ideas through imperfect or unsettling symmetry and substitution, including the possible substitution of London for Vienna as the play's setting.

Most of Shakespeare’s comic titles are never actually mentioned in the dialogue of their plays. And when the title of Measure for Measure is actually heard in its final scene, it is also subtly changed:

An Angelo for Claudio, death for death!
Haste still pays haste, and leisure answers leisure,
Like doth quit like, and measure still for measure (5.1.406–08)

The word ‘still’ upsets the symmetry of the biblical phrase. The Duke’s speech here captures the complications of the play’s attempts to reconcile opposites and balance competing claims. His philosophy of justice is based on a conditional – if Claudio were dead, Angelo’s life would be payable in response. However, Claudio isn’t dead, as the Duke well knows, so what then for Angelo? What would be an appropriate punishment, and under what law? What has Angelo actually done wrong? A speech that looks as if it is structured around symmetry and equivalence is revealed to be attempting to weigh up incommensurable situations and characters. 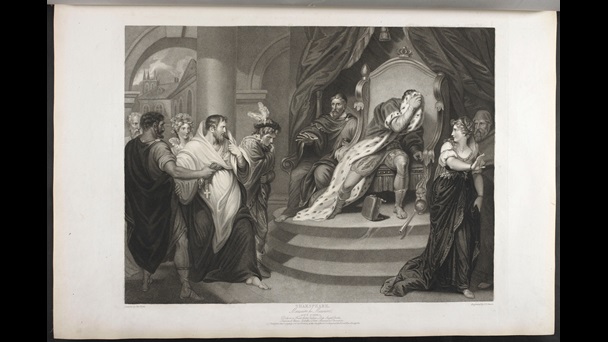 The theme of disrupted symmetry is crucial to Measure for Measure. Apparently parallel situations turn out to be unbalanced. Angelo and Mariana have a pre-contractual relationship like Claudio and Juliet, but Claudio wants to be married whereas Angelo abandons his fiancée. Like Claudio, Lucio has got a woman pregnant outside marriage, but unlike him, parades his escape from his responsibilities. Isabella’s chilling realisation, ‘More than our brother is our chastity’, points out the impossibility of placing life and honour in the moral scales. Paired characters look similar but are actually disproportionate and unbalanced: Isabella desires the discipline of the convent whereas the Duke uses a friar’s habit for deceit, and we feel that vocational mismatch particularly at the Duke’s unanswered proposal in the play’s closing moments. And apparent opposites turn out to be strangely similar: perhaps the same actor played Mariana and Mistress Overdone, for instance; or perhaps Isabella and Angelo – who in previous versions of the story end up married – are actually better suited than the play can quite allow.

John Philip Kemble as Vincentio in Measure for Measure, c. 1794 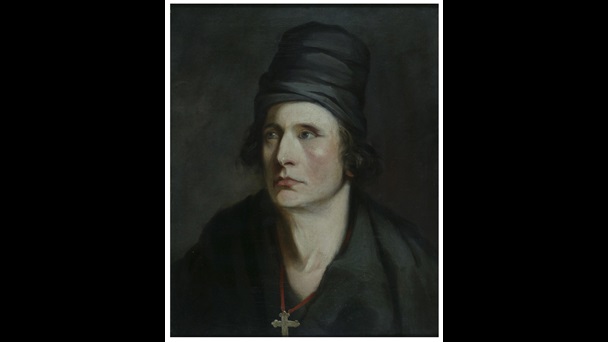 Double deception: an anonymous painting of the actor, John Philip Kemble, playing the Duke disguised as a friar.

The antitheses of this polarised play – between liberty and restraint, or chastity and fornication, or justice and mercy, or the life on earth or in heaven – are dramatised as ultimately incompatible. This is a play full of argument, and almost entirely without compromise. The Duke’s instruction to Claudio in prison – ‘Be absolute for death’ (3.1.05)– captures the play’s avoidance of half-measures. 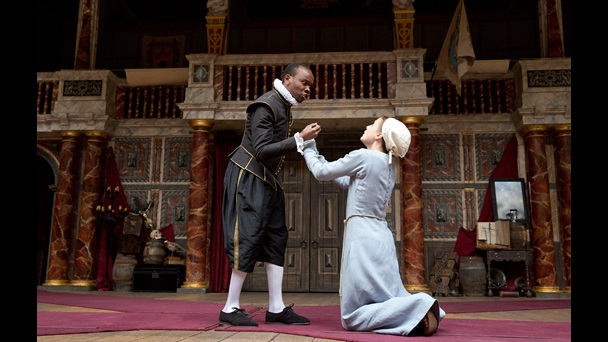 Isabella pleads with Angelo for mercy towards her brother, and the Duke is seduced by her virtue and eloquence. Act 2, Scene 4, Measure for Measure.

Related to this theme of wonky equivalences is the device of substitution. The whole plot of Measure for Measure is based on substitution – the replacement of the Duke by his deputy, Angelo, having ‘Elected him or absence to supply’ (1.1.18) as head of the Viennese state. Maidenheads are also substituted: Mariana takes the place of Isabella in Angelo’s bed. And so too are real heads. Angelo demands proof that Claudio has been executed, and it is proposed instead that a drunken murderer, Barnardine, be executed in his stead. But Barnardine, unlike Mariana, will not go along with this substitutive plan: he does not want to be a bit-player in the Duke’s moral melodrama. One effect of Barnardine’s comically unrepentant resistance is to focus attention on the play’s theme of substitution – because this substitute has himself to be substituted. Fortunately, a pirate, Ragozine, has died in the prison that day of a fever, and his head can serve instead. Both the bed trick and this head-trick suggest, disturbingly, that persons are interchangeable: one can stand for another because all dead heads look similar enough, and bedding one woman is much like any other. Perhaps, too, we are supposed to see some unsettling equivalences between the Duke and Angelo, as if the deputy undertakes the rough wooing of Isabella on behalf of his more suave superior, just as Angelo is set up to enforce the law more harshly in order that the Duke can come back to a reformed city. 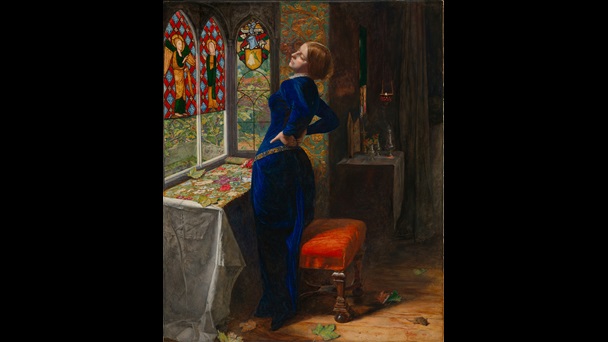 There are other substitutions, from Elbow’s comically mistaken words to the swapping of Lucio’s death sentence for punishment by whipping and Angelo’s for punishment by forced marriage. Angelo’s proposition to Isabella involves the substitution of her virginity for her brother’s life. The Duke substitutes the freedom of the friar’s habit for the constraints of public office; perhaps Isabella substitutes the Poor Clare convent for marriage; the play’s multiple concluding marriages substitute nuclear families for the suburb and brothel. Trying to persuade Angelo to be lenient, Isabella invites a more imaginative substitution:

These shifting pronouns show how difficult this act of substitutive identification is for the play’s fundamentalist characters, none of whom can really engage with what it is to be in someone else’s shoes. 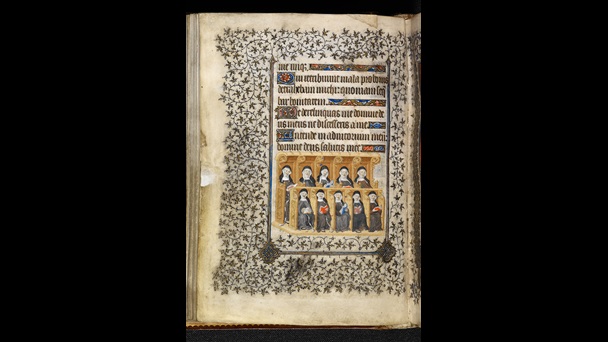 The nuns in this intricate painting are probably Poor Clares – the holy ‘sisterhood’ which Isabella hopes to join, perhaps as a substitute for marriage.

Perhaps the most significant of the play’s substitutions is geographical. Set in a Vienna with no obvious distinguishing civic features (its prison, brothels and court could be anywhere), the play is the nearest approach Shakespeare made to the popular contemporary genre of city comedy: sharp, streetwise and morally queasy dramas set in a recognisable London. Recent work has suggested that parts of the play, which was not published until 1623, were adapted or in some way overwritten by Thomas Middleton, known for plays of this type such as A Chaste Maid in Cheapside and Michaelmas Term. Middleton may well have been responsible for Mistress Overdone and the play’s seamier elements. The edict to pluck down ‘all houses [brothels] in the suburbs’ (1.2.95) echoes similar laws in contemporary London, and the final scene at the city gates may well have resonated with the recent entertainment for the new king, James I. 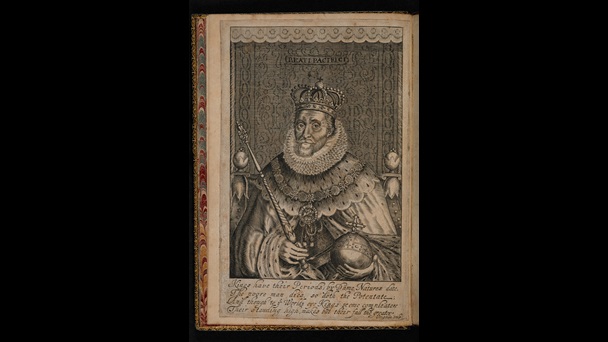 In this pamphlet, Gilbert Dugdale describes James’ desire to ‘passe unknowne’ through the crowds waiting for his royal entry. This portrait of the new king is affixed at the front of the book.

In March 1604 London produced a lavish civic pageant to mark James’s coronation, including set-piece playlets at a number of ceremonial arches or city gates. Playwrights including Thomas Dekker and Ben Jonson were involved in the writing of the coronation spectacle, and, along with his fellow actors in the company newly taken under James’s patronage as the King’s Men, Shakespeare was given a grant of red cloth for the festivities. It may even be that he was one of the professional actors delivering the speeches in front of the triumphal arches designed by the architect Stephen Harrison. Shakespeare was certainly attentive to the entry pageant and may well recall it to his London audience when he describes the Duke’s return to Vienna, where Friar Peter establishes ‘a stand most fit’ (4.6.10) amid the crowds for Isabella to bring her petition:

you may have such vantage on the Duke
He shall not pass you. Twice have the trumpets sounded.
The generous and gravest citizens
Have hent the gates, and very near upon
The Duke is entering. (4.6.13–17)

The Arches of Triumph, built for James I's entry into London, March 15th 1604 Shakespeare might have been one of the actors who delivered speeches in front of huge triumphal arches, at James I’s entry into London.

As later plays such as Macbeth and King Lear attest, Shakespeare was highly attentive to the tastes of his company’s royal patron. James’s published advice to his young son about the nature of government, Basilicon Doron, conceptualised authority in terms of spectacle: ‘Kings being publike persons, by reason of their office and authoritie, are as it were set … vpon a publicke stage, in the sight of all the people … Which should make Kings the more carefull, not to harbour the secretes thought in their minde, but suche as in the owne time they shall not be ashamed openlie to avouche’. Many critics have felt that the Duke’s reticence about the spectacle of authority – ‘I love the people, / But do not like to stage me to their eyes’ (1.1.66–7) – may be a reference to James’s desire for more privacy in his new kingdom, and perhaps the Duke’s mysterious motives in some way shadow the experience of Londoners encountering their new and unfamiliar sovereign. The trope of the disguised ruler was certainly revived for a cluster of adjacent plays that, like Measure for Measure, were performed early in James’s reign, including Middleton’s The Phoenix and John Marston’s The Malcontent. What is striking about Shakespeare’s Duke – unlike his avatars in the well-known ‘monstrous bargain’ stories from which Shakespeare takes the outline of his plot – is that he has been there all along. The ending of Measure for Measure is not a new comedic beginning, but a reinstatement of the old order (perhaps a final example of its repeated pattern of imperfect substitution). The Duke returns to power, Angelo and Lucio retread old affairs in their enforced marriages, Claudio returns, ‘muffled’ as the stage direction puts it, like Lazarus from the dead. If this is Shakespeare’s welcome to the new Jacobean age, it is a rather jaded one.