The character of Ophelia has fascinated directors, actresses, writers and painters since she first appeared on stage. Here Elaine Showalter discusses Ophelia's madness as a particularly female malady, showing how from Shakespeare's day to our own Ophelia has been used both to reflect and to challenge evolving ideas about female psychology and sexuality.

Shakespeare gives us very little information from which to imagine a past for Ophelia. She appears in only five of the play’s 20 scenes, and her tragedy is subordinated to that of Hamlet. It is impossible to reconstruct Ophelia’s biography from the text. According to the critic Lee Edwards, ‘we can imagine Hamlet’s story without Ophelia, but Ophelia literally has no story without Hamlet’.[1] Yet Ophelia is the most represented of Shakespeare’s heroines in painting, literature and popular culture. Over the past 400 years, she has moved from the margins to the centre of post-Shakespearean discourse, increasingly becoming a female counterpart to Hamlet as a portrait of conflict and stress. In recent years, she has become a strong feminist heroine, even surviving Hamlet in some fictional versions of the story, to lead a life of her own.

Hamlet, published by the Cranach-Presse 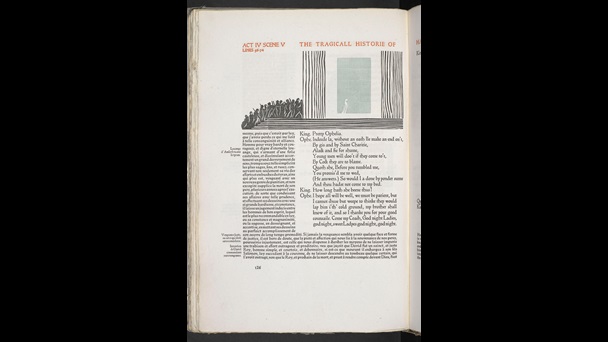 Poor Ophelia ‘divided from herself’: a woodcut by Edward Gordon Craig in the lavish Cranach-Presse edition of Hamlet (1930).

On the stage, theatrical representations of Ophelia have shifted according to the dominant theories and images of female insanity, while historically the images of Ophelia have played a major role in the construction of medical theories of insanity in young women. Always, these theories contrast masculine and feminine experience. For the Elizabethans, Hamlet was the prototype of melancholy male madness, associated with intellectual and imaginative genius; but Ophelia’s affliction was erotomania, or love-madness. Biological and emotional in origins, it was caused by her unrequited love and repressed sexual desire – an idea that is explored in both Edward Jorden’s treatise on hysteria, The Suffocation of the Mother (1603), and Robert Burton’s Anatomy of Melancholy (1621). On the stage, Ophelia was costumed in virginal white to contrast with Hamlet's scholarly black, and in her mad scene she entered with dishevelled hair, singing bawdy songs, and giving away her flowers, symbolically deflowering herself. Drowning, too, was a symbolically feminine death. 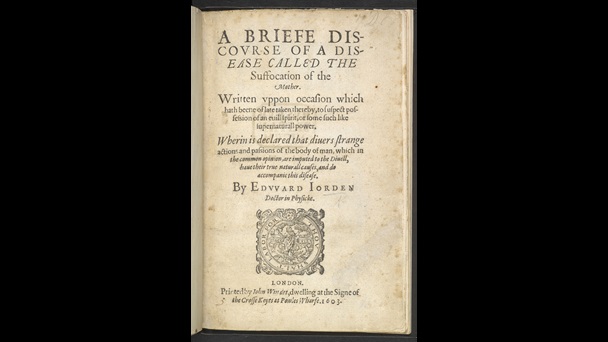 The Suffocation of the Mother (1603) suggests that virgins and widows are prone to hysteria caused by ‘congestion’ around the womb. 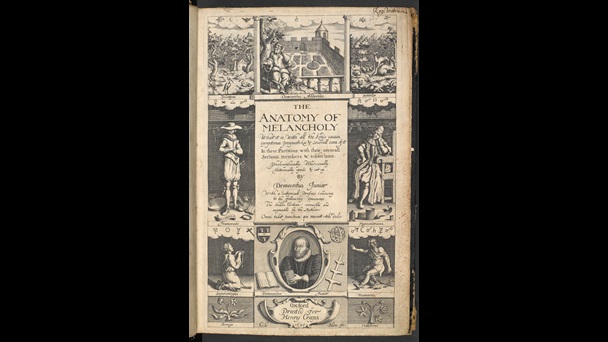 Burton’s vast Anatomy of Melancholy has a dedicated section on the afflictions of ‘Maides, Nunnes, and Widows’. This is the third edition, published 1628.

On the 18th-century stage, however, the violent possibilities of the mad scene were nearly eliminated, and any images of female sexuality were subdued. Mrs Siddons in 1785 played the mad scene with stately and classical dignity. For much of the period, in fact, Augustan objections to the levity and indecency of Ophelia's language and behaviour led to censorship of the part. Her role was sentimentalised, and often assigned to a singer rather than an actress. 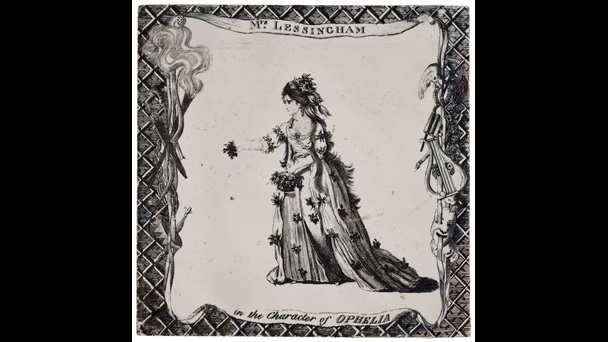 Decorative tile showing another 18th-century actress, Jane Lessingham, in the role of Ophelia.

But the 19th-century Romantics, especially in France, embraced the madness and sexuality of Ophelia that the Augustans denied. When Charles Kemble made his Paris debut as Hamlet with an English troupe in 1827, his Ophelia was a young Irish ingénue named Harriet Smithson. In the mad scene, she entered in a long black veil, suggesting the standard imagery of female sexual mystery in the Gothic novel, with scattered bedlamish wisps of straw in her hair. Spreading the veil on the ground as she sang, she arranged flowers upon it in the shape of a cross, as if to make her father's grave, and mimed a burial, a piece of stage business which remained in vogue for the rest of the century. Her performance was captured in a series of pictures by Delacroix which shows a strong romantic interest in the relation of female sexuality and insanity. The most innovative and influential of Delacroix's lithographs is La Mort d'Ophélie (1843), showing Ophelia half-suspended in the stream as her dress slips from her body. Ophelia’s drowning, which is only described in the play, was also obsessively painted by the English Pre-Raphaelites, including John Everett Millais and Arthur Hughes. The Romantic Ophelia feels too much, as Hamlet thinks too much; she drowns in a surfeit of feeling. 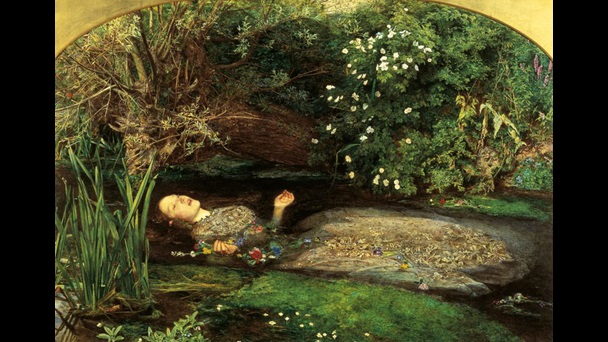 While painting Ophelia (1851–52), John Everett Millais asked his model Elizabeth Siddal to lie for hours in a bathtub of water.

19th-century psychiatrists used Ophelia as a case study in hysteria and mental breakdown in sexually turbulent adolescence. As Dr John Charles Bucknill, president of the Medico-Psychological Association wrote in 1859, ‘Every mental physician of moderately extensive experience must have seen many Ophelias’. Images and staged photographs of Ophelia-like mad women, taken in asylums and hospitals, anticipated the fascination with the erotic trance of the hysteric which would be studied by the Parisian neurologist Jean-Martin Charcot and his student Sigmund Freud. The Victorian Ophelia – a young girl passionately and visibly driven to picturesque madness – became the dominant international acting style for the next 150 years, from Helena Modjeska in Poland in 1871, to the 18-year-old Jean Simmons in the Laurence Olivier film of 1948. 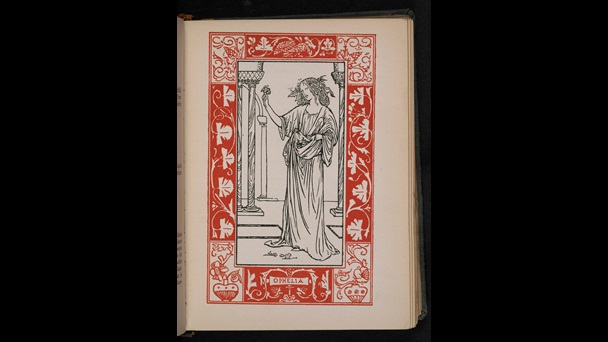 At the end of the Victorian era, Robert Anning Bell drew ‘sweet Ophelia’ doling out flowers, as she does in Act 4, Scene 5.

But a few Victorian actresses and women writers were revising Ophelia in feminist terms. Ellen Terry played her as a victim of sexual intimidation. 20th-century Freudian interpretations emphasised Ophelia’s own neurotic sexual desires, and hinted at her unconscious incestuous attractions to Polonius or Laertes. Around the 1970s, Ophelia on stage became a graphic dramatic study of mental pathology, even schizophrenia, sucking her thumb, headbanging, even drooling.

But at the same time, feminism offered a new perspective on Ophelia's madness as protest and rebellion. For many feminist theorists, the madwoman was a heroine who rebels against gender stereotypes and the social order, at enormous cost. The most radical application of these ideas on stage may have been Melissa Murray's agitprop play Ophelia (1979). In this blank verse retelling of the Hamlet story, Ophelia runs off with a woman servant to join a feminist guerrilla commune. In the 21st century, there have been even more extreme political versions and adaptations of the play – for example, The Al-Hamlet Summit (2002), by Sulayman Al-Bassain, which imagines Shakespeare’s characters from a modern Islamic perspective and resets the play in an unnamed Arab kingdom. Hamlet becomes an Islamist militant, while Ophelia becomes a suicide bomber. In popular psychology books such as Reviving Ophelia: Saving the Souls of Adolescent Girls (1994) by Mary Pipher, Ophelia has also become a negative model of the self-destructive teenager in contemporary society. Pipher encourages girls to become independent, assertive, and confident. In young-adult romance novels, such as Dating Hamlet (2002), Ophelia: A Novel (2006), and Falling for Hamlet (2011), Ophelia has become a heroine. Plot devices of pretended madness, feigned death and amazing rescue have allowed her to survive the trauma of dating Hamlet, and to choose her own path. Ophelia may have no usable past, but she has an infinite future.