Richard III and the staging of disability

In the Elizabethan period, disability was often viewed as a sign of moral impairment. Katherine Schaap Williams considers how Shakespeare's portrayal of Richard III relates to both modern and medieval ideas of disability, as well as how the play's performance history complicates our understanding of Richard's body. She thereby reveals a richer and more complex reading of Richard as more than just a monstrous or moral example.

Richard III has always asked audiences to pay attention to Richard’s body, to expect to see a body that he calls ‘deformed’ and we might today call ‘disabled'. We imagine this body, following a long history of performance, with a hump, a limp, an immobilised arm – and even a production that plays Richard against type, without visible disability, depends for surprise on how Richard’s body doesn’t look distinctive. Shakespeare’s play draws upon sources that make a point of Richard’s appearance: for example, Thomas More’s History of King Richard III, written between 1513 and 1518, describes Richard as ‘little of stature, ill-featured of limbs, crook-backed, his left shoulder much higher than his right, hard-favoured of visage'. This text is politically complicated, because More’s History needs to disavow Richard in keeping with the Tudor monarchy in power at the time of writing. As the description of Richard’s portrait with overpaint indicates, it is difficult to separate the history of Richard’s disability from representations that work as propaganda. The texts that set up expectations for Richard’s body are shaped in advance by the history of Richard’s political actions. 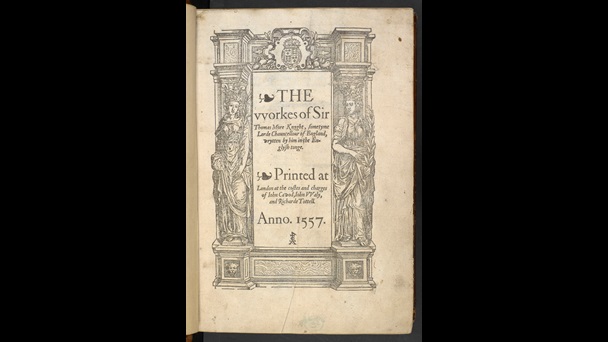 The account of Richard III in Thomas More’s Workes is a remarkable piece of character assassination that focusses obsessively on his body. 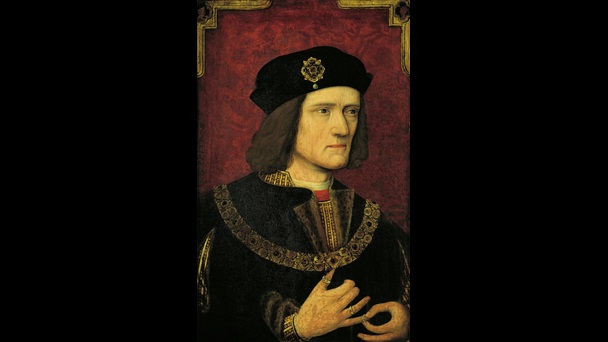 This Tudor painting of Richard III seems to have been deliberately altered to emphasise his disability.

This example gestures to how frequently interpretations of physical difference, in the Renaissance, depend on reading the body as having moral significance. Two key early modern terms associated with Richard’s character are ‘deformed’ and ‘monstrous’, both part of an interpretive pattern that takes bodily anomalies as evidence of deeper moral truths. As Thomas Hill shows, in physiognomy, the body (‘crookednesse of the backe’) makes visible something unseen (‘wickednesse of conditions’ (sig.Bb2r)). Seen through this frame, Shakespeare’s Richard III has a hunchback formation because his contemporaries would have interpreted that body as evil – he proves to be the evil figure his bodily difference suggests. Indeed, those who defended the historical Richard often did so by claiming his disability was an invention: believing Richard was innocent often meant asserting that he was not disabled, that his hunchback formation was just as much a fiction as his evil deeds. Conversely, in William Hay’s 1754 Deformity: An Essay, one of the earliest examples of a first-person account by a disabled author of his experience, although Richard III is held to be part of a shared lineage of deformity, Hay insists that Richard was ‘misrepresented by Historians, who thought they must draw a Devil in a bad shape’ (sig.B3r): Richard’s bad actions meant that his body had to be deformed.

The Art of Physiognomy by Thomas Hill 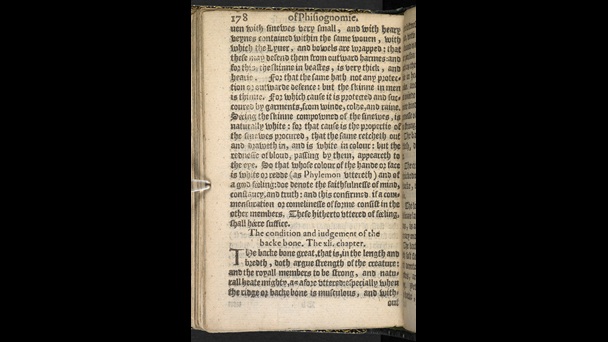 But what does this bad shape look like? In his opening soliloquy, Richard describes himself as ‘rudely stamped’ (1.1.16), ‘ curtailed of this fair proportion’ (l. 18), ‘cheated of feature’ (l. 19) and ‘deformed, unfinished’ (l. 20), finally declaring that he will ‘descant on mine own deformity’ (l. 27). Yet despite Richard’s insistence that he is ‘deformed’, he does not tell us exactly what his body looks like. He emphasises that his body is unconventional and stresses negation (‘not shaped for sportive tricks’ (l. 14)) and difficulty with movement (‘I halt’ (l. 23)). Unlike the specific physical descriptions that histories supply, however, here Richard associates his body not with a ‘crookbackt’ shape or even with the motivation ‘since the heavens have shaped my body so, / Let hell make crooked my mind to answer it’ (5.7.78–79) that he claims for his actions in 3 Henry VI. Although this is a history play that asks us to carry our knowledge of characters across the four plays, the Richard of Richard III is and is not the Richard of 3 Henry VI. Colley Cibber’s adaptation of Richard III in 1700, which would remain prominent in performance into the late 19th century, worked against this difference, importing lines from 3 Henry VI to motivate Richard’s character, including the lament about his appearance:

By contrast, the Richard of Shakespeare’s Richard III insists on the language of deformity that is curiously unspecific in its description. 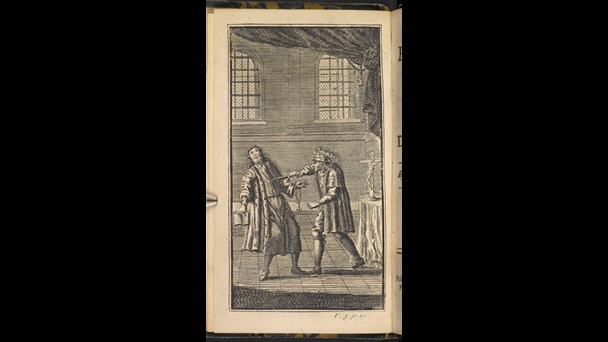 Richard, Duke of Gloucester murders Henry VI in a chapel. Richard’s speeches on his body in 3 Henry VI are often included in performances of Richard III.

I emphasise this point because scholars in disability studies have turned to Richard III’s deformity to conceptualise the Renaissance as a time that anticipates modern ideas of disability. In 2013, when Richard’s skeleton was conclusively identified and the curved shape of his spine was diagnosed as scoliosis, public commentary seemed to confirm that while people in Shakespeare’s moment would have understood this body as evil, today we would understand this body as not-yet-cured, the object of medical treatment. Yet this certainty reflects assumptions that scholars in disability studies, an academic field growing out of the disability rights movement, have challenged. Disability studies critique the contemporary ‘medical model’ of disability, which understands disability as a problem in need of corrective cure. By contrast, the ‘social model’ of disability studies shifts the emphasis to the social, cultural and environmental factors that disable impaired bodies: for example, a wheelchair user is not disabled until she encounters a building without a ramp. The social model of disability, then, registers not the need to make bodies and minds normal, but the importance of equitable access and accommodation, making the world hospitable to diversity.

Extending the cultural concept of disability to representations in literature, scholars have argued that disability is commonplace as a metaphor (figuring blindness as lack of insight, for example) or trope (such as the ‘disabled avenger’ character – think of the arch-villain in nearly every superhero film), but that these representations rarely reflect the experience of actual people with disabilities. Richard III, therefore, seemed to offer an early example of the ‘disabled avenger’ trope, or of an irregular body disabled by early modern interpretations of deformity as a sign of evil. Recently, scholars have argued that Shakespeare’s play complicates any simple claim about early modern disability: the play does more than simply set out Richard’s deformed body as a monstrous or moral example. Allison Hobgood considers the play’s engagement with medical discourse of its own moment, pointing out that characters repeatedly read Richard’s body according to emerging ideas of diagnosis and correction advanced by early modern physicians. Furthermore, by drawing attention to the indistinction of Richard’s ‘deformity’, I am suggesting that, for Richard, the body that we read as disabled actually enables his political actions. Aware of the negative associations of his body, he wields his appearance as an excuse, claiming his deformity as evidence of inability; yet he courts his way into marriage despite protesting that he is ‘misshapen’, and late in the play he shows off a ‘withered arm’ (which may not look any different) in a demonstration of power that allows him to kill Lord Hastings. There is not much Richard can’t do, and to do things, he puts his body on view, using the multiple interpretations and expectations it prompts to achieve his ambition and the crown he desires.

The crucial importance of Richard’s deformity is also a consequence of the theatre’s reliance upon the body of the actor that produces the character. Richard’s body takes a different form with every show, reminding us that ‘deforming’ is another early modern term used to describe the actor’s shape-shifting behaviour. Richard’s ‘Now’ opens the play: he assumes the spotlight to start the show. And the audience, in turn, waits to see what Richard’s distinctive body will look like this time, marvelling at the actor we know from other roles – whether, in watching Richard III, we read Kevin Spacey’s limp back to Roger Kint, his character from The Usual Suspects, or read Peter Dinklage’s short stature forward to his role as Tyrion Lannister in Game of Thrones – who enacts this version of Richard’s shape. Richard’s deformity becomes the occasion for virtuosic acting, almost always by actors who do not identify as disabled. Work in disability studies has critiqued this practice of ‘cripdrag’ or ‘cripping up’, with deliberate reference to the cultural appropriation performed by an able-bodied actor who assumes, and then discards, a disability characterisation (often to great acclaim). Richard complicates this important critique: throughout the history of performance, the role’s demands – employing complicated prostheses or adopting a contorted posture or exaggerated limp – tax an actor’s body. As Paul Menzer recounts, anecdotes of injury abound about actors who assume Richard’s role, reproducing the play’s insistence on foregrounding Richard’s body.

Ultimately, the dynamics of stage performance unsettle an equation between Richard’s display of deformity and any easy interpretation of disability. Shakespeare’s play participates in a history of interpreting bodily difference as negative, but the theatrical medium ensures that Richard’s deformity is never stable and never reducible to a singular meaning, whether moral emblem or medical diagnosis, which unsettles all of the other bodies in the play. Not a question, then, of whether Richard’s deformity is the sign or the cause of his evil acts (a key distinction in Bacon’s essay ‘Of Deformity’); rather, Richard’s body is crucial to our desire to watch the play. Richard, who puts his deformity on display, uses his shape to confirm his plan to engineer his plots, producing a performance that we want to see. Reading Richard’s staging of disability calls attention to what we want to see when we look at Richard, and what we think disability can mean. 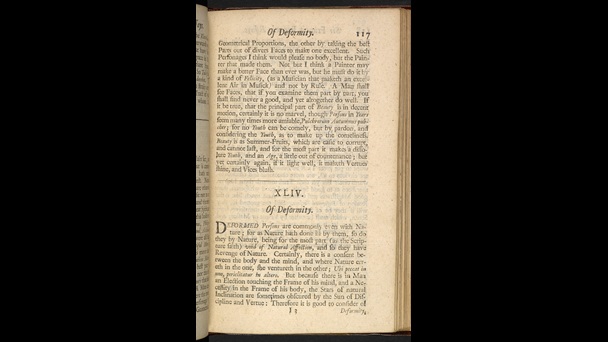 Bacon’s essay ‘Of Deformity’ questions whether the body is a sign or a cause of a person’s character.

Allison Hobgood, ‘Teeth Before Eyes: Impairment and Invisibility in Shakespeare’s Richard III’ in Disability, Health and Happiness in the Shakespearean Body, ed. by Sujata Iyengar (London and New York: Routledge, 2014).