Eric Rasmussen and Ian DeJong consider the actors who first played Shakespeare's fools, and their influence on the way that, over the course of the playwright's career, his fools move from physical comedy to verbal humour and, finally, to melancholy and cynicism.

Among the many curiosities crammed into odd corners of The Tragicall Historie of Hamlet, Prince of Denmark is Hamlet’s idiosyncratic sense of how stage clowns ought to behave. In his conversation with the players in Act 3, Scene 2, Hamlet explains what bad clowning looks like, and why it ought to be avoided:

...let those that play your clowns speak no more than is set down for them; for there be of them that will themselves laugh, to set on some quantity of barren spectators to laugh too, though in the meantime some necessary question of the play be then to be considered. That’s villainous, and shows a most pitiful ambition in the fool that uses it. (3.2.38–39)

Today, we might find it puzzling that someone would speak so vehemently about such a seemingly trivial matter. Who cares how the clown acts? So what if a fool is foolish? He’s a minor character, and he’s supposed to be funny. What does a bit of extra foolery matter?

The answer, of course, lies in changing cultural expectations. While we might think little of the buffoonery of a Nick Bottom or the witticisms of a Feste, Shakespeare, his contemporaries in the early modern professional theatre and especially his audiences, valued clowning highly – and scrutinised it carefully in its many onstage manifestations. 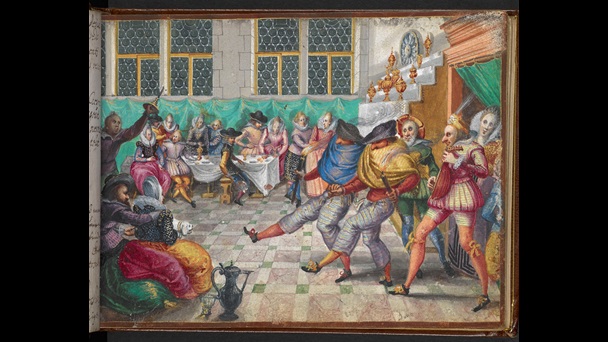 An early 17th-century painting of travelling players entertaining in a great hall.

Scholars of Shakespearean performance history return to those lines of Hamlet with some regularity. Some believe that Shakespeare wrote them with a specific person in mind: Will Kemp, who had played the clown roles in the 1590s for the Lord Chamberlain’s Men (with whom Shakespeare was associated). Kemp was well known as a physical comic, with preternatural strength and dexterity. Thanks to his performance of such roles as Nick Bottom in A Midsummer Night’s Dream and Falstaff in Henry IV, Part 1 and 2, and The Merry Wives of Windsor, Kemp became a household name in London during the 1590s. His importance to the Lord Chamberlain’s Men kept pace with his popularity; when the Globe Theatre was built out of the timbers of the old Theatre in Shoreditch, Kemp was one of the six charter shareholders. Then, for reasons we don't know, he sold his share in the Globe and left the Lord Chamberlain’s Men – a turn of events that may have prompted Hamlet’s anger at fools who were too ‘ambitious’. After he left, Kemp turned to public performance beyond the theatre; his most famous stunt, a morris dance from London to Norwich, got enough attention that he wrote a pamphlet about it. Will Kemp, famous for his jigs, morris-dances from London to Norwich in nine days.

Kemp was not the first celebrity clown, however; that distinction belongs to Richard Tarleton. Active in the 1570s and 1580s, Tarleton became known as the finest clown of his generation. Indeed, he was one of the stars raided to form the Queen’s Men, one of the premier acting troupes of the 1580s. So famous were Tarleton’s ‘infinite jest’ and ‘most excellent fancy’ (to borrow Hamlet’s paean to Yorick, 5.1.185) that in 1600 – 12 years after his death – a volume entitled Tarlton’s Jests was published. Though he almost certainly never clowned in a Shakespeare play, his influence reverberates throughout the gallery of Shakespeare’s clown-characters.

London audiences chose Kemp as Tarleton’s motley successor. But Tarleton himself thought more highly of Robert Armin, who would eventually replace Kemp in the Lord Chamberlain’s Men. Armin’s approach to clowning was very different from Kemp’s; by all accounts, he had a lovely singing voice and a talent for verbal comedy. Whereas Kemp had tumbled and bumbled about the stage as Bottom or Falstaff, Armin’s talents lay in a more intellectual direction. Shakespeare must have seen this fairly early in Armin’s residency, because around the turn of the 17th century, we see a remarkable evolution in the clowning that occurs in his work – a transition from pure clown to court fool.

‘It is meat and drink to me to see a clown’

In the first roles that Shakespeare created for Will Kemp, the clown was routinely subject to pratfalls, misfortunes and humiliations. Physical comedy was paramount: Bottom shows up wearing asses’ ears, and we laugh at his expense.

Transformation of men into asses in The Ship of Fools, 1509 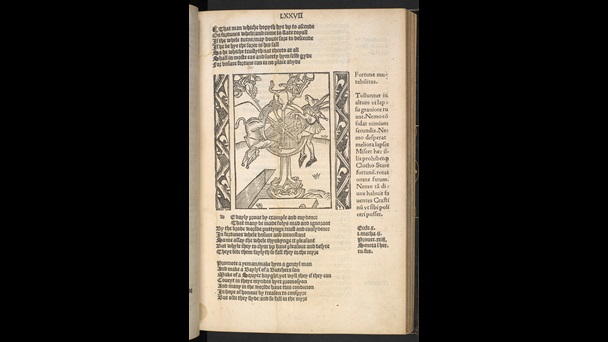 Albrecht Dürer’s depiction of the transformation of man into ass in a moral satire on folly.

Toward the middle of Shakespeare’s career, however, his clowns took on a different cast, relying less upon physical comedy and more upon wordplay and other verbal humour. Characters such as Dogberry in Much Ado About Nothing, Costard in Love’s Labour’s Lost, and perhaps Pompey in Measure for Measure are still laughable, not just comical; but whereas the early clowns often have a moment of realisation in which their failures are laid out for them (and the entire theatre) to see, middle-period clowns frequently carry straight on in their foolery, never knowing that the whole world laughs at them. Dogberry and his mates of the Watch are perfect examples of this sort of blinkered doggedness. Their speech is filled with malapropisms: ‘dissembly’ for ‘assembly’, ‘redemption’ for ‘condemnation’, ‘suspect’ for ‘respect’ and so on. We laugh at their blundering, but we laugh even more because they never recognise their blunders.

Of course, Shakespeare – that incessant innovator – could not leave his clowns static for long. Around the turn of the 17th century, beginning with Touchstone in As You Like It and developing through Twelfth Night’s Feste and King Lear’s Fool, Shakespeare’s clowns change yet again. No longer the pratfalling bumblers of the early period, nor the ridiculous punsters of the middle period, Shakespeare’s late clowns are rather more melancholy than their stage ancestors. Feste provides an excellent example of the late fool. He is not without his jests and his gibes – to Olivia’s ‘What’s a drunken man like?’ Feste responds, ‘Like a drowned man, a fool, and a madman: one draught above heat makes him a fool, the second mads him, and a third drowns him’ (1.5.130–33). But underneath and through his whimsy runs a current of world-weariness and cynicism. When Orsino offers to pay him for singing, Feste declines: ‘I take pleasure in singing, sir.’ ‘I'll pay thy pleasure then,’ says Orsino, but Feste disrupts the gentle mental fencing with a bitter thrust: ‘pleasure will be paid, one time or another’ (2.4.68–71). Throughout the play, Feste balances the sort of clowning audiences would expect with bitter commentary upon the world of (and beyond) the play. 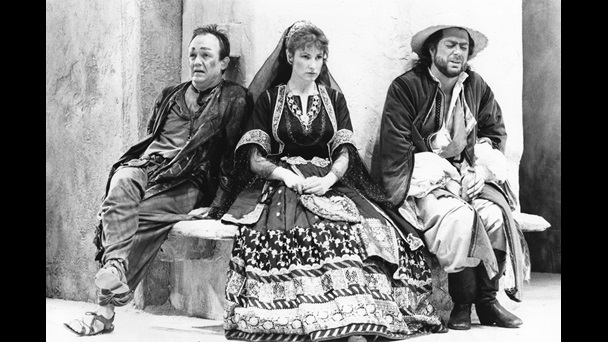 If Feste’s clowning is a triumph of balance, King Lear’s Fool moves decisively to the more melancholy disposition towards which Shakespeare’s clowns were inexorably trending. Like Feste, Lear’s Fool has moments of humour, but he directs most of his energy towards condemnations of corruption and political misjudgement. Combining the pessimism of Feste with the outright misanthropy of Thersites from Troilus and Cressida, Lear’s Fool offers a clear-sighted diagnosis of Lear’s diseased court, even as he demonstrates his touching loyalty to his king. For this, it seems, his punishment is death: ‘And my poor fool is hanged’ (5.3.306), Lear laments. King Lear’s Fool is the only clown to die during his play’s action. Clearly, these late clowns – Feste, Touchstone, Lear’s Fool – were not written to prompt jeering mockery (as were the bumblers) or giddy laughter. Rather, they prompt a meditative and even chastened response. 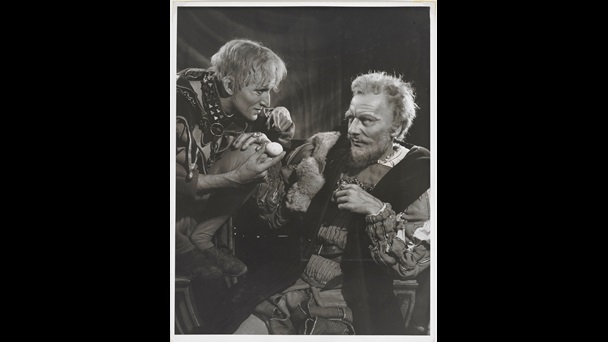 Alan Badell as the Fool and John Gielgud as Lear at the Shakespeare Memorial Theatre.

After Armin took over Kemp’s spot in the Chamberlain’s Men, the clown roles in Shakespeare’s plays began to include songs. It has been speculated that Armin’s fine singing voice prompted this shift, in part; but singing also serves the important dramatic role of breaking up tension. Kemp’s tumbling may have served a similar purpose; after his departure, Armin’s songs frequently commented obliquely on the action onstage, putting distance between viewer and narrative, reminding audiences that the events onstage were really no more than men and boys speaking with tongues other than their own. 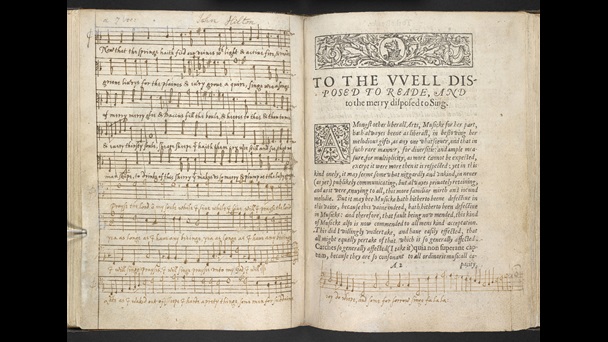 ‘Some men for sudden joy do weep, and some for sorrow sing.’

Although Kemp and Armin’s styles of clowning were fundamentally different, they represented the two sides of the traditional role of the court jester. ‘Jester’ was an office in the medieval court, much like the other courtly offices such as chamberlain, steward and constable. Employed to amuse their noble masters, jesters did so through a variety of antics, sometimes physical (Kemp’s style) and sometimes verbal (Armin’s). Jesters were expected to speak foolishly, glibly, and with multiple layers of satirical or ironic meaning, frequently using puns, proverbs, or just nonsense to make their jests. Jesters thus had remarkable freedom to speak truth to power. In part, because they were often considered to be touched by supernatural forces, jesters were given far more rein to mock their masters than other more ‘normal’ but less privileged courtiers. King Lear’s Fool is perhaps the purest court jester in Shakespeare’s plays: glib, madcap, clever and insightful, he speaks bitter truth to his master the King, especially in those moments when Lear does not wish to hear that truth. 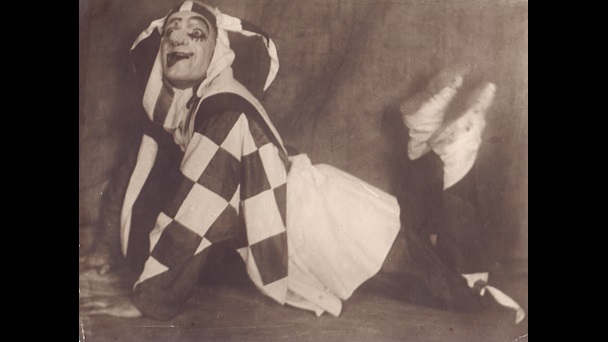 In the end, the audiences in early modern playhouses paid their penny-and-up to be entertained. And so, to a considerable extent, the companies catered to the audiences’ tastes. But it is also true that theatre professionals sometimes worked to change those tastes. In the matter of clowning, as in so many others, Shakespeare never contented himself with the status quo.