The first night of The Tempest

The Tempest was first performed in the enclosed, candlelit space of the new Blackfriars theatre. Here Professor Gordon McMullan describes how audience members would have found themselves participating in an innovative and captivating theatrical experience.

When in 1610 or 1611 the audience climbed the great stone stairs of the former Blackfriars monastery to see Shakespeare’s new play The Tempest performed in candlelight within the dining-hall-turned-theatre, they would have found themselves participating in an extraordinary theatrical experience. It will have been new in multiple ways for many in the audience – and certainly for any who had not previously attended this indoor playing space, newly reclaimed by the King’s Men to function as the winter counterpart to their long-standing open-air theatre, the Globe. As the earliest play we can be sure Shakespeare wrote with the Blackfriars in mind, The Tempest capitalises on performance possibilities that had not been available to the company prior to the occupation of its new theatre a couple of years earlier. The brio with which Shakespeare exploits the potential of the space in The Tempest resonates down the centuries as each generation re-makes the play for its own moment. There have been many extraordinary performances of The Tempest since 1611, but arguably none more so than that very first afternoon at the Blackfriars.

The Tempest is a magical play, casting a spell over theatregoers and readers alike. Its protagonist, Prospero, is a politician and a magician or male witch haunted by the memory of another witch, Sycorax, the mother of Caliban, the only indigenous inhabitant – ‘indigenous’, that is, for a single generation – of the island on which he finds himself exiled, and he deploys the magical powers he has learned from his books both as tools of coercion and as the means to ensure his return home through a carefully rehearsed dynastic marriage for his daughter Miranda. This play of magic, marriage, return and revenge was a powerful influence on Shakespeare’s contemporaries and successors, and it has had a near-unbroken history on the stage since those very first performances, a history striking for its spectacle, its music and its ability to amaze audiences. 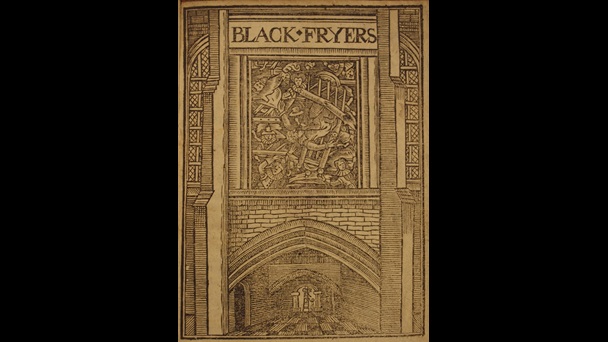 Woodcut from Richard Hord’s Black-Fryers (1625), showing the collapse of part of the monastery complex which stood next door to the playhouse.

What would this new performance space have been like, and how different would it have been from the Globe? Structurally, the stage was not so very different: the playing space remained a thrust platform with galleries on three sides, a wall (the frons scenae) with doors at the rear and a musicians’ gallery above the tiring house. Yet it was half the size of the Globe stage, and the effective playing space was even smaller, given that one of the privileges for which fashion-conscious men – they were known as ‘gallants’ – would pay handsomely was to be able to sit on stools on the sides of the stage and be visible to the rest of the audience. Certainly it would take an actor less time than in the Globe to move from his entry through a door in the frons scenae to a position at the front of the stage, and Shakespeare responded accordingly, writing fewer lines between a character entering and that character either speaking or moving within earshot of those already on stage. With no need for stage posts to hold the roof up and with seated gallants occupying the sides of the performance space, the standard theatrical activity of eavesdropping, which in the Globe could be performed by a character literally stepping ‘aside’ or hiding behind the stage posts, in the Blackfriars typically involved ascending to the musicians’ gallery, thereby substantially altering the dramatic topography. 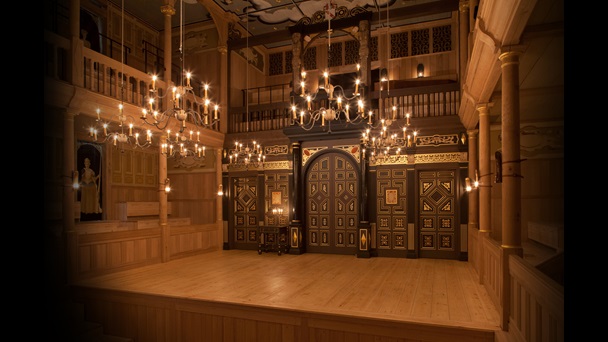 The Sam Wanamaker playhouse – a new candlelit theatre next to Shakespeare’s Globe – is designed to replicate the indoor playhouses of the early 17th century.

As the intrusion of gallants onto the stage itself suggests, theatregoing at the Blackfriars took on a social and sartorial quality quite different from that of the Globe, offering fashion opportunities unavailable to audiences at the open-air amphitheatres, who needed to wrap up warm for most of the year. At the Blackfriars, by contrast, they could arrive in their finest clothes, wearing colours and jewellery chosen to gleam brightly in the candlelit theatre – the most immediately obvious difference between the Globe and the Blackfriars being light. The Globe is famous for its openness to the elements; the Blackfriars, by contrast, was an enclosed indoor space with candles as its primary light source. It seems probable that there were windows high up, but these may well have been shuttered for daytime performances, placing the focus firmly on the candles, housed in six or more chandeliers (‘branches’) over the stage and also probably in wall sconces. Francis Bacon in his essay ‘Of Masques and Triumphs’ notes that ‘[t]he Colours, that shew best by Candle-light, are; White, Carnation, and a Kinde of Sea-Water-Greene; And Oes, or Spangs [sequins], as they are of no great Cost, so they are of most Glory’[1], making it clear how conscious members of an audience could be about their theatregoing attire. Shakespeare cannot resist mocking Blackfriars fashion culture: in Act 4 of The Tempest, Stephano and Trinculo, en route to a reckoning with Prospero, are distracted by Ariel through the use of ‘glistering apparel’ (‘glistering’ was a word particularly associated with meretricious clothing effects): ‘O King Stephano! O peer! O worthy Stephano!’ cries Trinculo, ‘look what a wardrobe is here for thee!’ 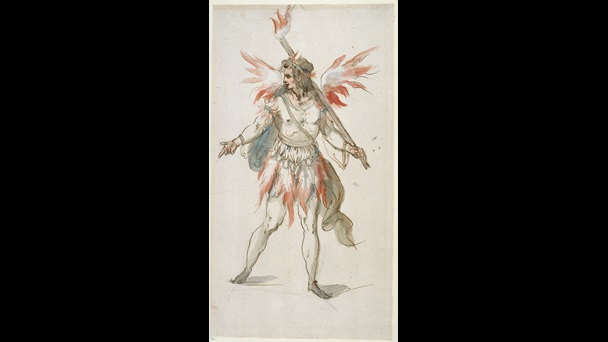 Inigo Jones’ design for the costume of a fiery spirit in Thomas Campion’s The Lord’s Masque, 1613.

Things would also have sounded very different in the indoor theatre from the way they did in the large, open soundbox of the outdoor amphitheatre. It is clear that music featured regularly in Blackfriars plays in a way it had not in the amphitheatres, as a direct result of the changes in lighting. At the indoor theatre, the five-act structure of Jacobean plays became fully established, facilitating four intervals in which music would be played. These breaks were essential because of the quality of early modern beeswax candles, which needed trimming every half hour or so. Shakespeare’s plays to this point, written for the Globe, had had no need for such breaks in the action, but the practicalities of indoor playing required this change in the shape of the drama, and they explain in part the musicality of The Tempest and the other ‘late plays’. Act breaks may also have contributed to the visuals, enabling the changing of stage hangings to depict shifts of setting from act to act. The aural context was very different: in the Blackfriars, a whisper on stage would be audible in the galleries, and plays written for the indoor theatre would tend to feature sotto voce scenes (i.e. those spoken quietly) far more than those written for the amphitheatres. And this meant changes in the musical world of the Blackfriars.

For one thing, the instruments would have differed: lutes would have been more audible than in the Globe, and trumpets, too loud for the acoustically intense spaces of the Blackfriars, were replaced by hautboys and cornetts – not the modern valved cornet but a form of woodwind, loud enough for fanfares but quiet when accompanying voices. At the Blackfriars, the consort of musicians occupied the gallery above the stage and so were visibly involved in the performance in a way they had not been when, as in the early days at the Globe, they had played behind the frons scenae. This seems to have heralded a new level of integration of music into the action. The music of The Tempest is by no means restricted to the intervals: the play is famously crammed with both instruments and voices, from Ariel’s haunting ‘Full fathom five’ to the ‘thousand twangling instruments’ that ‘hum about’ Caliban’s ears. Music drives the plot at times, as Ferdinand is led by Ariel – ‘invisible, playing and singing’ – to his first meeting with Miranda, and it converts easily to cacophony: ‘to a strange hollow and confused noise, they heavily vanish’. Songs are intrinsic to the play, specially created with plot, action and company in mind. 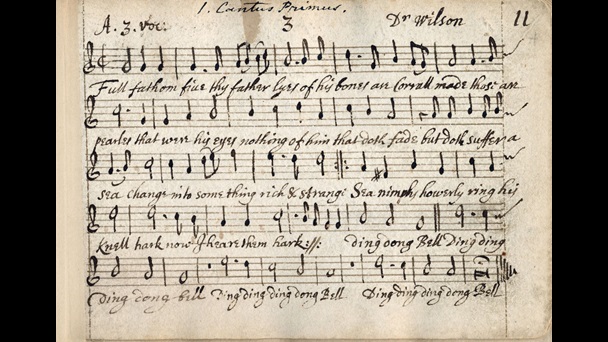 Manuscript for the music of ‘Full fathom five’ in The Tempest.

Sound produces both harmony – ‘sweet airs, that give delight and hurt not’ – and chaos – the roar of thunder created by rolling a cannonball down a lead pipe, the ‘several noises / Of roaring, shrieking, howling, jingling chains, / And more diversity of sounds’ that awakes the sailors from their entranced sleep, or the ‘noise of hunters’ and their dogs – ‘divers spirits in shape of dogs and hounds’ – that drive Stephano, Trinculo and Caliban from the stage.

Frontispiece to The Wits, showing chandelier above the stage of a 17th-century indoor playhouse 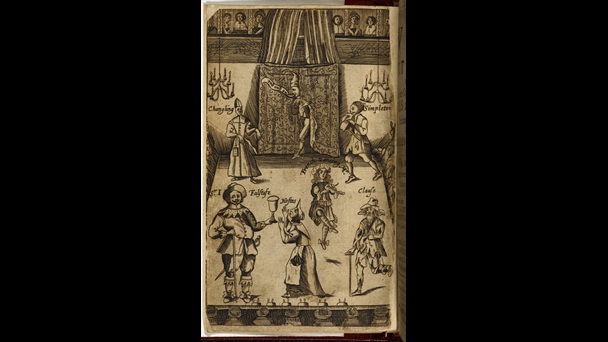 An impression of a 17th-century indoor playhouse, with artificial lighting from candles and chandeliers.

All of this reminds us of the sheer spectacle of Blackfriars performance of the play, perhaps above all when the King and his courtiers are about to dine on a magnificent banquet only to have it whipped away before their eyes as lightning strikes. The spirit Ariel, ‘like a harpy’, ‘claps his wings upon the table, and with a quaint device the banquet vanishes’. We are not clear how the ‘quaint device’ worked, but imagine the sudden snuffing of candles and the table’s rapid descent into the stage trap. The trap, with its hellish connotations, would be familiar to audiences from the Globe, but it probably had a heavenly counterpart at the Blackfriars – a chair descending from the roof above the stage that would enable the descent of Juno to bless the marriage of Miranda and Ferdinand in Act 4. Shakespeare drew on these mechanisms for the dramaturgy of his Blackfriars plays, foreshadowing the tradition of spectacular staging that lay in The Tempest’s future. There were hugely elaborate stage effects in Charles Kean’s 1857 production of The Tempest. This set design for Act 4 shows Juno descending to bless the marriage of Miranda and Ferdinand.

The first night of The Tempest thus gives us a sense both of the conditions for performance in Shakespeare’s own day and of the future of performance of his plays across the succeeding centuries. The Tempest continues to be a magical play, as its presence in the opening ceremonies of the 2012 Olympic and Paralympic Games underlined, the play somehow taking its rightful place within the context of the technological extravaganza witnessed both by those lucky enough to be in the stadium and by millions more around the world. Originally written to capitalise on the possibilities of a new theatre, The Tempest – far from being the end of the affair – continues to amaze in each new theatrical context, in each new performance space, in every new guise it adopts for the next moment of discovery. 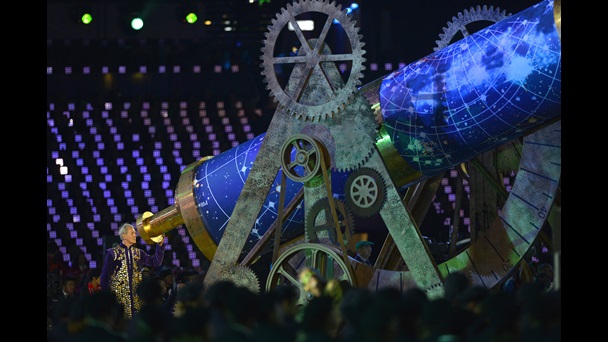 The magic of The Tempest was captured in the opening ceremony of the 2012 Paralympic Games, where Ian McKellen played Prospero.