‘Shall I compare thee to a summer’s day’? Here, Richard Price reveals how through a process of close reading he ‘translated’ – or ‘transformed’ – Shakespeare’s Sonnet 18 into a modern love poem.

one minute the sun is foundry hot,

the next all gold is lost.

The season’s fairs, too, so easily decline – bad luck reigns,

you won’t lose, love, the celebration

your self-contained self, almost by itself, contains.

Death won’t claim you mooch in his twenty-four hour mall.

That boast is nearer mine –

in these eternal lines you walk right by my side.

So long as folk can breathe or eyes can see

so this will live, and this gives life to you and me.


When I was completing the collection of love poems that became Rays (2005) I was looking for a poem to use as an epigraph, to introduce the central theme of the book – one that said a huge ‘Yes’ to love and a ‘Yes’ to the history of love poetry, too.

Shakespeare’s Sonnet 18, ‘Shall I compare thee to a summer’s day’, was a natural choice:

Shall I compare thee to a summer's day?

Rough winds do shake the darling buds of May,

And summer's lease hath all too short a date:

Sometime too hot the eye of heaven shines,

And often is his gold complexion dimm'd;

And every fair from fair sometime declines,

But thy eternal summer shall not fade

Nor lose possession of that fair thou ow'st;

Nor shall Death brag thou wander'st in his shade,

When in eternal lines to time thou grow'st;

So long as men can breathe or eyes can see,

So long lives this, and this gives life to thee.

Perhaps too natural a choice, in fact. I had second thoughts.

Yes, the poem is in no doubt about the beauty of the lover in question: with a knowing sense of the storms and downpours of the English summer, Shakespeare tells us his matchless loved one can hardly be compared to summer when we know how rarely summer matches its ideal. So far, so good.

But, wait; if summer isn’t all it’s cracked up to be and everyone knows it, that’s not such a positive statement to make. Shakespeare needs to qualify his comparison by emphasising he’s talking ideally – this is an ‘eternal summer’ he says, eventually.

And doesn’t Shakespeare get rather caught up in the weather forecast? He seems particularly disappointed with summer’s false promises – that heavy first stress of ‘Rough’ in ‘Rough winds do shake the darling buds of May’, breaks the iambic expectation of the sonnet, suggesting with brute force at the beginning of the line how disturbing a May gale can be to those delicate buds. Even when the sun shines in a cloudless sky as it’s meant to, here’s Shakespeare complaining again – not unlike many a modern holidaymaker who had initially wanted fair weather – that, yes, he had wanted the sunshine but after a few days he’s had enough of the hot weather, now, thanks: ‘Sometime too hot the eye of heaven shines’.

Though of course I love Shakespeare for these meteorological foibles (among other qualities…), I began to doubt whether I wanted this poem, unaltered, to preface my book. The thought of ‘translating’ and even ‘transforming’ Shakespeare began to dawn. To translate is always a form of close reading, and this helped me understand the original poem better, too. 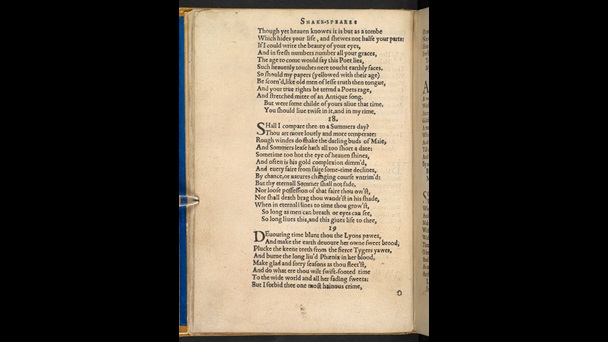 Sonnet 18, as published in the first edition of Shakespeare’s Sonnets.

‘And every fair from fair sometime declines’

The version of Sonnet 18 I would write would certainly pay tribute to its original, glossing some aspects into a modern idiom. It would also take new directions, as if it were a ‘variation’ on the sonnet (Rays was where I began to adopt a jazz approach to old standards in poetry, improvising rhythmically and thematically, half in tribute to the original, half in commentary about it).

For instance, I was especially interested in the probing Shakespeare does with that word ‘fair’. To make a conventional gloss, when he says ‘And every fair from fair sometime declines, / By chance, or nature's changing course, untrimm'd’, he is probably meaning, with a melancholy sense of mortality, that every beautiful person loses their physical beauty in the end, sometimes by bad luck (the word ‘chance’ suggests a single episode, an accident or a sudden illness perhaps) or simply through the normal (‘untrimm'd’) passing of time.

I wanted to add a new dimension to the poem – cheeky sacrilege, I know, but if you can’t do anything in poetry where can you do it – and I read that word ‘fair’ differently. I thought of how I often used to go to fairs with my children – music festivals, agricultural fairs, market fairs and so on. I don’t think Shakespeare is referring to those sorts of gatherings – when he talks about ‘fair’ it is immediately after the idea of ‘complexion’, so the primary sense is of physical, even facial, beauty. This gives way to a pure if under-described sense of beauty in that last use of the word ‘fair’, when Shakespeare promises his lover essentially eternal attractiveness: ‘thy eternal summer shall not fade / Nor lose possession of that fair thou ow'st’.

All the same, I wanted to talk about that other ‘fair’ that, by chance, this poem had conjured: the world of temporary pavilions, food and entertainment; of general human activity organised seasonally. And as I was reading Sonnet 18, it struck me how often these open-air get-togethers were next to rivers. As time passes, rivers do indeed change their ‘course’ – again, I read one of Shakespeare’s words in a way that is not necessarily there in the poem but is still sympathetic to it. (In any case, Shakespeare is notorious in his sonnets for using words which have multiple meanings. ‘Fair’ is a prime example of one of those ‘multivalent’ words.)

This brought to mind all those open-air fairs spoilt by bad weather and flooding; of these gatherings shifting location, or disappearing altogether, as the geography of rivers and their banks change over time. So, while Shakespeare’s poem is about personal time, I wanted to give mine more of a historical flavour and suggest the fragility of the collective enterprise of humanity, not just individual mortality, all in the context of Nature’s far longer timescale.

‘So long lives this, and this gives life to thee’

Another aspect of Sonnet 18 I wanted to reorient is what I’d call its ‘competition of the braggers’. When Shakespeare tells his lover that Death, personified, won’t ‘brag thou wander'st in his shade’, he is offering her immortality: he is suggesting either that she will not pass into the territory or that, if she does, then Death will still not be able to boast about entire possession of her because she is in a sense still alive, thanks to William Shakespeare Esquire.

The poet goes on to spell out how he is going to activate this immortality: it’s the ‘this’ of the final line; the perpetual life is granted by Shakespeare and the sonnet itself. After all, the sonnet’s lines, he less than modestly tells us, are ‘eternal’.

In fairness, Shakespeare is also talking about the ability of writing more generally to keep the dead alive, metaphorically speaking, via its preservation and transmission in manuscript copying and via the still relatively new-fangled process of printing. This is a conceit but, thinking more widely about this concept, it’s a serious business, one which has allowed humanity to progress in leaps and bounds over the centuries: the world’s greatest libraries are founded on this belief, namely that preserving writing for the information and pleasure of successive generations is a way of keeping ideas and articulated sensations, if not actually the dear departed, wholly alive.

In my poem, while accepting the sonnet as one version of an eternity machine, I wanted to at least admit that Death and the poet were ranged against each other in their boastfulness. I confessed that my mutated sonnet was a ‘boast’ – something which Shakespeare does not – and I downgraded Heaven from what I had taken to be a garden, making it an appalling 24-hour shopping mall (sadly, to some, this would not be seen as satire).

I levelled what is to modern eyes a strange subject-object situation in the original, in which poet and lover are peculiarly isolated from each other by virtue of the poet’s cool observation of her: I allowed poet and lover to walk together in imagined eternity (‘in these eternal lines you walk right by my side’). The eternity of my poem is not for ‘men’ only to experience as watchers or ‘readers’: I made the continuation of life, through poetry, something that all ‘folk’ could do.

Finally, with one last brusque addition, I added an iamb to Shakespeare’s final line, making sure I again admitted that this poem was as much for me as for my lover, and that, again, we would both be together as loving equals: ‘So long as folk can breathe or eyes can see / so this will live, and this gives life to you and me’.