Penny Gay considers the qualities of Twelfth Night that make it a festive comedy, from its romantic setting to the persistent riddling of its characters.

One of the few plays of Shakespeare that is mentioned in a contemporary performance, Twelfth Night was seen by London law student John Manningham in February 1602, at the Middle Temple Hall. He wrote in his commonplace-book: ‘at our feast wee had a play called Twelve Night, or What You Will, much like the Commedy of Errores, or Menechmi in Plautus, but most like and neere to that in Italian called Inganni’. The literary source material of the play was obviously delightfully familiar to the educated men of the audience; and the similarity of the ‘screens’ entrance end of the hall to the back wall of the Globe’s stage meant that it would have been easy for Shakespeare’s company, the Lord Chamberlain’s Men, to give a one-off performance for the lawyers’ winter feast in the candlelit hall.

The festival of Twelfth Night in John Manningham's diary 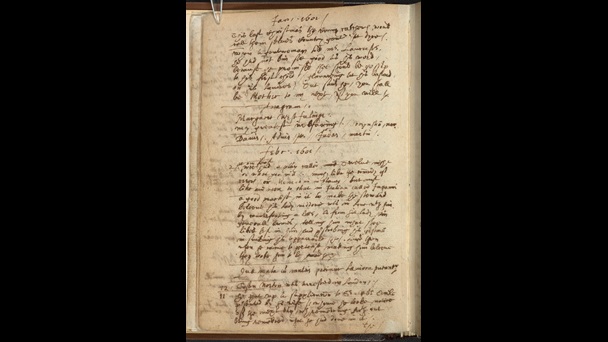 Manningham’s diary records a performance of Twelfth Night on 2 February 1602.

Photograph of Middle Temple Hall, the location for the first recorded performance of Twelfth Night 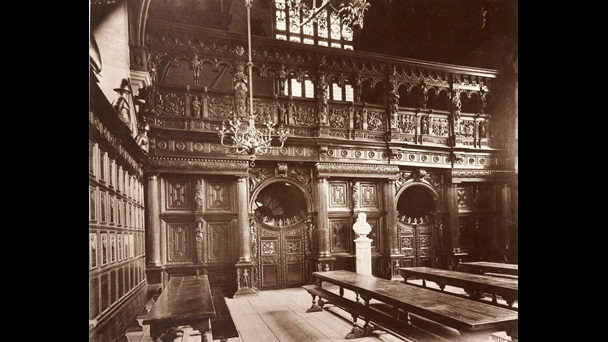 In 1602 a production of Twelfth Night was performed here to an audience of lawyers.

The play’s setting in Illyria, however, seems more warm and exotic than Manningham’s wintry London. ‘What country, friends, is this?’ asks Viola as she enters the play (1.2.1). Coming from Messaline (a fictional place, possibly derived from the Latin name for Marseilles), Viola thinks of ‘Illyria’, the coast of the eastern Adriatic (today Dalmatia and Albania) as strange and potentially dangerous. The sea-lanes of Illyria were famous for pirates, and the play has one such, Antonio, who tells the audience that he ‘adores’ Sebastian, whom he has rescued from the shipwreck that separated the twins. This ‘salt-water thief’, as Orsino calls him (5.1.69), is also, evidently, a romantic and generous man who knows his way around an Illyrian city remarkably like the London of Shakespeare’s day: he recommends that Sebastian stay at the ‘Elephant’ public house ‘in the south suburbs’ (3.3.39) – which was in London near the Globe Theatre and in reality not a very reputable place. While Orsino’s great house is an Italian-style court, embracing a leisurely life of music, hunting and literary love-fantasies, Olivia’s is more like a genteel English establishment, with its garden and a population of servants and hangers-on who – lacking a male head – make her house ‘an alehouse’, in Malvolio’s disapproving words (2.3.89). 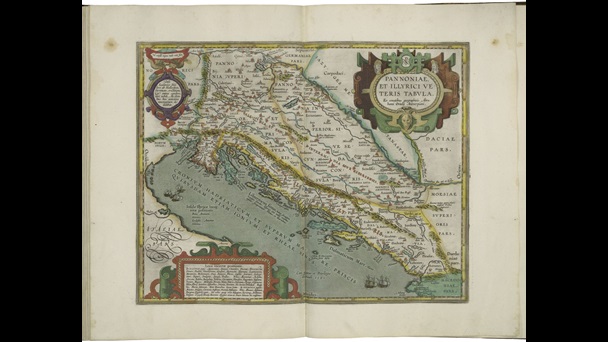 A 16th-century map of Illyria, the setting for Twelfth Night.

‘What You Will’, the play’s alternative title, might refer to the festive ‘misrule’ of Twelfth Night, 5–6 January, the traditional last day of Christmas festivities and thus the final party before the return to a wintry workaday world. It is easy to see in the drunkenness and rowdiness of Sir Toby Belch and his companions a desire for the party never to stop – he is always calling for another ‘stoup of wine’, and observing that ‘not to be abed after midnight is to be up betimes’ (2.3.1–2). This rumbustious scene sets up the play’s popular secondary plot, the gulling of Malvolio, Olivia’s house steward. The play does not mention Christmas, or Candlemas (the February feast on which Manningham saw the play), but Maria does label Malvolio a ‘Puritan’, which was a strong term in the politics of religion in 1600. Puritans were anti-theatre, anti-drinking and feasting, and anti-Catholic. Such winter feasts as Christmas, Twelfth Night (commemorating the visit of the three Wise Men to the baby Jesus) and Candlemas (the feast of the presentation of the Christ Child in the temple) were strongly associated with the ‘Old Religion’, Roman Catholicism, which had caused such conflict in 16th-century England.[1] Twelfth Night’s ‘wassailing’ is in fact an even older, folk and pagan tradition, with the Lord of Misrule (here embodied in the rowdy English knight Sir Toby Belch) signifying that the ‘normal’ world and its behaviour were turned upside down for the duration of the feast. In this light it can also be argued that Viola’s dressing in male clothes, and Malvolio’s fantasy that he (a servant) can become the husband of his lady Olivia, are also examples of the world turned upside down.

The Fight between Carnival and Lent 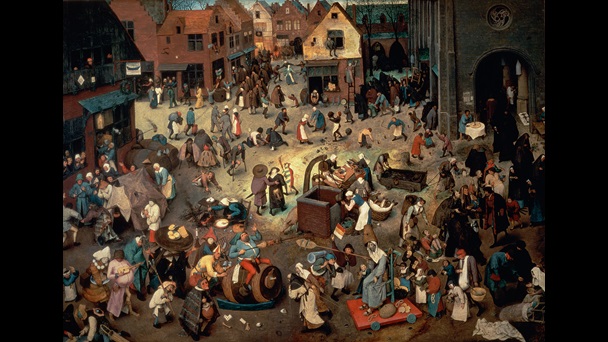 A painting by Pieter Bruegal the Elder depicting tension and balance between the inn and the Church.

Language, too: as Viola says, ‘How quickly the wrong side may be turned outward!’ (3.1.12–13). Twelfth Night is a punning, riddling play (which no doubt the young lawyers of Middle Temple appreciated). Its plot depends upon deliberate confusions between apparently identical twins – though they can’t actually be identical, as they are male and female; the heroine, Viola, chooses to dress like her brother Sebastian as a living memorial of him. In disguising herself as a boy in order to survive in a foreign land, and taking service with the noble Duke Orsino, she assumes the personality of a witty young courtier, engaging in riddling and banter with everyone she encounters. To Olivia, who has fallen instantly in love with this ‘boy’, she says, ‘I am not what I am’ (3.1.141); and a dialogue in the same scene with the play’s clown, Feste, seems to reveal that he is the only person in Illyria to have his suspicions about ‘Cesario’: ‘Who you are, and what you would, are out of my welkin’. (3.1.57–58)

The action of the play is, in Viola’s words, an ‘untangling’ of this topsy-turvy situation of ‘what you will’: ‘O Time, thou must untangle this’, she says in soliloquy (2.2.40). The play is full of references to time passing; the audience is being primed to recognise unconsciously that the two hours of confusion will come to a satisfactory resolution. Or will it? Sir Toby and Maria’s revenge on the ‘madly-used Malvolio’ (5.1.311) for stopping their party has culminated in his appearing in yellow stockings, cross-gartered, ‘a fashion she [Olivia] detests’ (2.5.200), and attempting to woo Olivia with most inappropriate language and gestures. Yet when he is put in the ‘dark house’ (a treatment for mad persons in the period), and desperately calls out for ‘light’ so that he can write his justification of his behaviour, the scene (Act 4, Scene 2) in which Maria and Feste tease him is one in which it is impossible to ignore the cruelty to an innocent (if deluded) person. Manningham thought the Malvolio story ‘a good practise’, and it was undoubtedly the most famous role in the play throughout the 17th and 18th centuries, but productions of the play in recent decades have recognised and explored the bullying behaviour by a dominant group of characters, and Malvolio has more often than not become a distressingly abused and tragic figure. His situation is certainly not resolved by the play’s end: in a chilling moment after the revelations, recognitions, and romantic unions of Act 5, he is brought on to make his complaint of mistreatment, and when the clown laughs at him, he exits with the threat, ‘I’ll be revenged on the whole pack of you’ (5.1.378). It is almost as though Shakespeare had a premonition of the triumph of the English Puritans in the first half of the 17th century. A certain melancholy for the passing of a merrier Old England of ‘cakes and ale’ (2.3.116) and of life and young love underpins this festive comedy, and seems to be evoked in Feste the clown’s final song, with its very English chorus, ‘The rain it raineth every day’ (5.1.369). 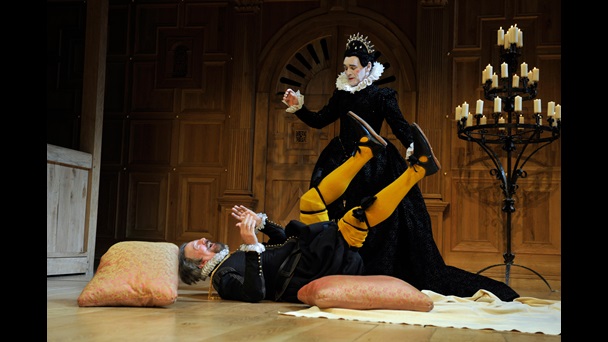 [1] In 1535 Henry VIII, Queen Elizabeth’s father, had declared the Church in England to be not subject to the Pope: many Catholic men and some women were executed. His daughter Mary on acceding to the throne declared England Catholic once more, and hundreds of Protestants were martyred. Under the Protestant Queen Elizabeth I, Catholics and Catholic practices were declared treasonable; those caught and condemned were hung, drawn and quartered.

The contributor has asked for the following credit: Em. Prof. Penny Gay, The University of Sydney.