Liza Picard takes a look at witchcraft, magic and religion in Elizabethan England.

We all need to blame someone else for calamities and tragedies – never ourselves. So when one of your cows dies, and a neighbour is on bad terms with you, clearly she has put a spell on your cow, even more clearly if, in the words of Discoverie of Witchcraft published in 1584, the neighbour is an old woman who is ‘lame, blear-eyed, pale, foul and full of wrinkles’. If she has a cat to keep her company, the case is even stronger. All witches have ‘familiars’ (demonic creatures that appeared in the form of animals). There were countless old women who were falsely accused of being witches, on no stronger evidence than that. Essex was particularly full of witches; or was it just that the county enjoyed the services of a particularly energetic witch-hunter?

The Discovery of Witchcraft by Reginald Scot, 1584 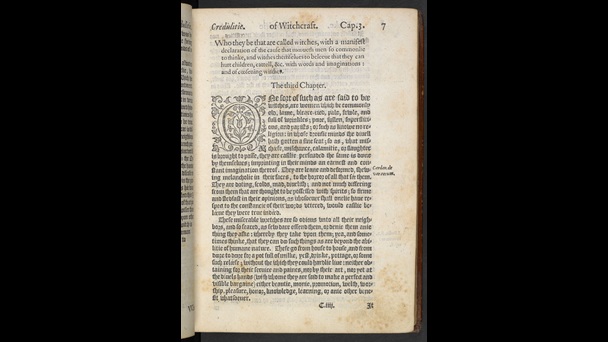 Reginald Scot wrote that witches are ‘commonly old, lame, bleare-eied, pale, fowle, and full of wrinkles …. They are leane and deformed, shewing melancholie in their faces, to the horror of all that see them … These miserable wretches are so odious unto all their neighbours, and to be feared’.

Witches were not all women. Lurid tales were told in whispers, of covens of men and women meeting at midnight, and sexual intercourse with the Devil, and wild flights … It has been suggested that a certain ointment popular in witchcraft circles contained mercury, which could induce a sensation of flying.

Witchcraft pamphlet: A Rehearsal both Strange and True, 1579 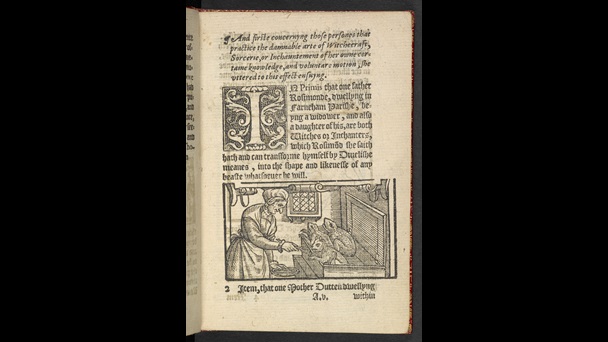 Illustration of a witch feeding her animal familiars in a pamphlet describing the case of Elizabeth Stile.

Horror at one remove has always been enjoyable. Elizabethan ballads catered for that taste as surely as the latest horror movie of our days. Even the wisest had some lingering belief in magic, whether evil or benevolent. Elizabeth, that daughter of the Renaissance, gave the Earl of Essex, whom she loved, a magic ring to protect him from the dangers of travel. And it was well known that a piece of unicorn’s horn would protect against poison.

The Elizabethans’ belief in some ‘medical’ practices can only be described as superstitious. Foremost in this was the theory of the Weapon Salve. Suppose you have suffered a sword wound: you must somehow obtain that very weapon – how, is not explained – and anoint that sword with a special salve obtainable at vast expense only from authorized sources. Forget about the wound itself. The anointing of the sword will ensure that the wound that it had inflicted heals. 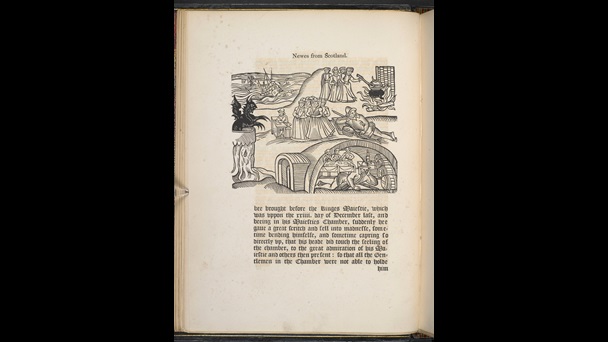 A case of witchcraft involving a plot against the King himself.

When Elizabeth came to the throne, England had experienced a series of religious convulsions. It was vital for her to calm everyone down, assuring them that she cared, while avoiding violent reactions. This was a path that only a brilliant tactician could tread successfully.

What her own religious convictions were is impossible to tell. The Catholics held passionately to the belief in transubstantiation: that the bread and wine at Mass were truly Christ’s body and blood. What did she believe? Elizabeth brilliantly circumnavigated this –

His was the word that spake it,
He took the bread and brake it,
And what that word did make it,
That I believe, and take it.

As ruler, she ‘did not seek to make windows into men’s souls’. So as long as you conformed, decently and publicly, you could privately believe what you liked.

A useful guide to conformity was published as the Book of Common Prayer, slightly modified from the version first issued in the reign of Edward VI. There were 39 Articles of Religion, some more obscure than others. Transubstantiation was dismissed as ‘repugnant to the plain words of scripture … and hath given rise to many superstitions’. Superstition was just what the new Church of England wanted to sweep away. With it went ‘Purgatory, Pardons, worshipping and adoration as well of Images and Reliques, and also invocation of saints’. To someone born before Henry VIII cut loose from Rome in 1531, who had survived the brief nightmare of Edward’s extreme Protestantism and who had welcomed the return to Rome under Mary Tudor, this wholesale jettisoning of familiar rites, relics and saints must have been traumatic indeed. And the bare white walls of the parish church were little comfort, compared to the parables and saints that had colourfully enriched a Catholic church. The only colour to escape the whitewashing brush was the stained glass in the windows, which would have been too expensive to replace.

But there were advantages in the new religion. The service was in English, clearly spoken by the priest, facing his congregation from a pulpit, instead of the old, incomprehensible Latin muttered round the altar. The congregation was now largely literate, and could follow the service in the Book of Common Prayer. There was a copy available in every church, as well as the Bible in English and Erasmus’s Paraphrases upon the Gospels, which together were enough spiritual food for any man. 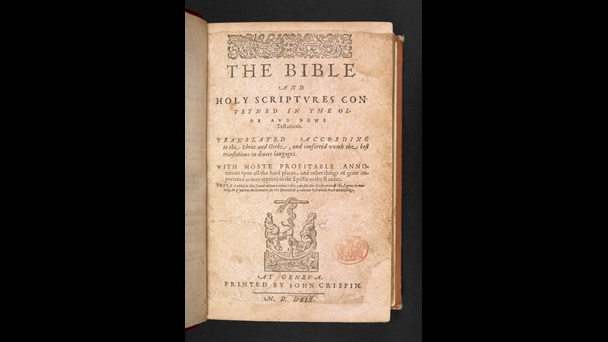 This highly significant little book, known as the Geneva Bible, is an English translation of the Old and New Testaments printed in Geneva, Switzerland.

The Puritans had set great store by impromptu sermons by laymen, which sometimes ran to inordinate length. Elizabeth would have none of that. Only licensed clergy might preach. If none was available, there were authorized homilies that could be read. Sometimes the congregation had to sit through a homily reminding them that churches cost money to keep in repair, and that laziness and ‘excess of apparel’ were sinful.

Attendance at least once every Sunday at your parish church was compulsory. Anyone failing to attend was fined 12 pence, which for a family could mount up inconveniently. It also brought a most unwelcome suspicion of being a recusant, a Catholic, an enemy of the State. Better, if at all possible, to bow the head and conform.

People from overseas were excused from attending the church in the parish where they lived, as long as they attended the church dedicated to their own particular Protestant faith. (These streams of people converging on one building, compared to the congregations of parish churches which were sometimes small, depending on the size of the parish, may have fostered the feeling that there were too many foreigners about).

Once your duty had been done in your parish church, it might be amusing to go along to St Paul’s Cathedral and listen to the sermons at Paul’s Cross. They were given by celebrities, and attracted visitors and tourists from far and near. They were sometimes on the long side, over two hours, but it was perfectly decent to spend the time in assessing the current fashions, or discussing business deals. They were a useful source of current news, as well as spiritual uplift. Sometimes there were several thousand people there, tightly packed together, and, as one foreign tourist observed, smelling.