‘The Book of Sir Thomas More’ is the only surviving literary manuscript in Shakespeare’s hand. Here Andrew Dickson describes how the scene Shakespeare wrote for the play contains a moving plea for the plight of immigrants.

Among the 40ish plays written entirely or almost entirely by Shakespeare, there is a tantalising puzzle: a manuscript titled ‘The Booke of Sir Thomas Moore’ (booke in this context meaning ‘play script’). Now kept in the vaults of the British Library, the document is a play script from the late 16th century or early 17th, in draft form and dense with revisions and changes. Its main author seems to be the now little-known poet and playwright Anthony Munday (c. 1560–1633), but the text also appears to contain the handwriting of four fellow dramatists including a shadowy figure known initially as ‘Hand D’. In 1871, scholars proposed an identity for Hand D – William Shakespeare. If they are correct, the manuscript of Sir Thomas More contains something incalculably precious: the only example of Shakespeare’s handwriting in a literary manuscript.[1] 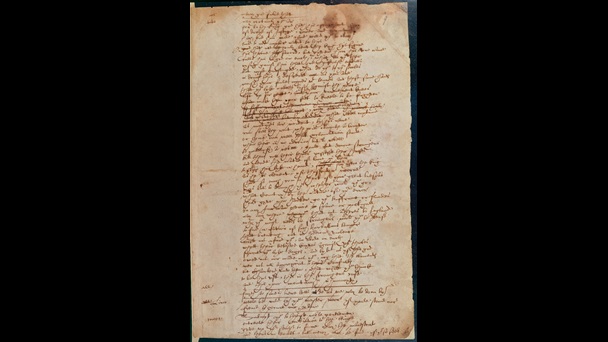 Harley MS 7368, the only surviving play script to include Shakespeare’s handwriting.

What is the play about?

The play’s subject matter is the rise and fall of Thomas More, the Tudor lawyer and polymath who was sentenced to death for refusing to recognise Henry VIII as Supreme Head of the Church in England. Even by the fraught political standards of Elizabethan England, More’s story was dangerous stuff: the events the play depicts had happened only 60-odd years earlier, and More was a Catholic who had died for his principles. Catholicism was officially banned under Elizabeth I, and adherents of the old religion forced to worship in secret; to present a sympathetic portrait of a Papist martyr who defied his monarch, as Sir Thomas More does, was risky indeed.

Still more riskily, the play dwells on xenophobic riots that tore through London in 1517. These riots bore troubling similarities to disturbances that had occurred in the 1590s and early 1600s, when the playwrights were working on the script; incensed by what they saw as dangerous levels of immigration from the European continent, rioters had rampaged through London calling for ‘aliens’ or foreigners to be expelled or have their throats cut.[2] As well as the handwriting of Munday, Shakespeare and the other dramatists – Henry Chettle, Thomas Dekker and Thomas Heywood – the manuscript also bears the exasperated comments and revisions of Edmund Tilney, Elizabeth’s theatre censor, who had the power to prevent performances of plays he deemed inflammatory. Sir Thomas More seems to have been one of those plays: as far as historians can tell, it was banned from public performance.[3]

What is Shakespeare’s scene about?

What does Sir Thomas More reveal about Shakespeare? Much more than his rather cramped handwriting. The most contentious moment in the script is what was called the ‘insurrection’ scene, in which xenophobic Londoners poured onto the city’s streets baying for immigrants to be thrown out of England. Though we tend to think of Elizabethan playwrights operating in splendid isolation, it wasn’t uncommon for writers to work together, contributing sections or speeches as required. At some point in the development of Sir Thomas More, Shakespeare seems to have been commissioned to write the play’s emotional highpoint, in which the heroic More – who is at this point in the play the sheriff of London – pleads with the crowd to accept and welcome the asylum seekers in their midst. ‘Imagine that you see the wretched strangers,’ More cries,

Their babies at their backs, with their poor luggage,
Plodding to th’ ports and coasts for transportation,
And that you sit as kings in your desires,
Authority quite silenced by your brawl ... (Sc. 6, 84–88)

More turns the rioters’ arguments back on themselves: if they themselves were refugees, where would they go? Which country would want them? ‘Why, you must needs be strangers,’ he concludes, finding no ‘abode on earth’, with ‘detested knives against your throats, / Spurn[ed] like dogs’ (ll. 148–50). Ashamed and contrite, the mob backs down.

Sir Thomas More may have been too contentious to stage at the time, but the power it has in the theatre is all too clear. In the speech Shakespeare gives to More, the sheriff single-handedly quells the riot by appealing to the crowd’s better instincts, and with imagery that is painfully vivid: ‘wretched strangers’ lugging their babies and their belongings, plodding to the coasts to be shipped back home – if they still have a home. In its show-stopping emotional force, it calls to mind the Jewish moneylender Shylock’s agonised appeal for tolerance in The Merchant of Venice (‘Hath not a Jew eyes?’ (3.1.59)), and touches on a question repeatedly probed by that drama and others such as Othello and Measure for Measure: what does fairness and acceptance look like? And what are the delicate social contracts that underpin multiculturalism?[4] As so often with Shakespeare, we have no way of knowing if More’s sentiments were the playwright’s too, but he makes the case for tolerance with blazing force.

Little-known though it is, and almost never performed, the scene is powerful even now, and not difficult to map on to refugee crises in the 21st century – whether in the apparently endless exodus seeking asylum from Syria’s bitter civil war or the stream of migrants heading overland to Europe from destinations as far-flung as Afghanistan and Eritrea. With the European Union divided over how to respond, and extremist and right-wing political movements capitalising on a wave of anti-immigrant feeling, these issues will not go away. Migration, as Shakespeare makes plain in this remarkable scene, is nothing new: the important question is how the rest of us respond.

[1] The attribution was first suggested by Richard Simpson, ‘Are there any Extant MSS. in Shakespeare’s Handwriting?’, Notes and Queries 183 (1871), 1–3. The arguments are rehearsed in Stanley Wells and Gary Taylor, William Shakespeare: A Textual Companion (Oxford: Oxford University Press, 1987), pp. 461–67, and extended in Shakespeare and ‘Sir Thomas More’: Essays on the Play and its Shakespearian Interest, ed. by T H Howard-Hill (Cambridge: Cambridge University Press, 1989).