In an increasingly complicated world, the chances for an illiterate boy or girl were slim. In light of this, a number of day schools were established. These included the Ragged Schools, Parish Schools and Church Schools.

A letter about Ragged Schools 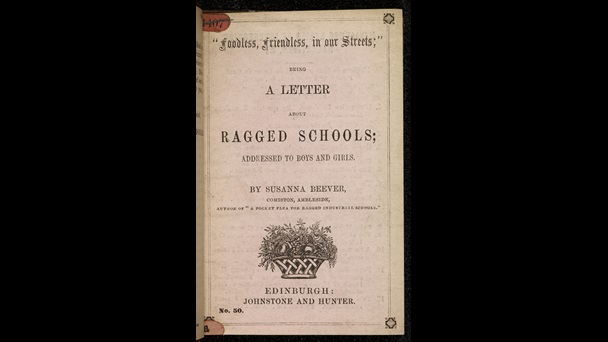 Ragged schools originated in the Sunday School founded in 1780 by Robert Raikes in Gloucester, who taught children to read so that they could read the Bible. Then a Portsmouth cobbler, John Pounds, gathered groups of children to play with his disabled nephew, and by 1818 had a class of 30 or 40 who he was teaching to read, from the Bible because it was the only book easily available. The idea spread to London. In 1844, 19 Ragged Schools joined to form a Ragged School Union, headed by Lord Shaftesbury. By 1861 they were teaching over 40,000 children in London, including the children of convicts, drunks and abusive step‐parents, and deserted orphans – and even ‘the children of poor Roman Catholics who do not object to their children reading the Bible’. By 1870 there were 250 Ragged Schools in London and over 100 in the provinces. Meanwhile Quintin Hogg, the ex‐Etonian son of a prosperous London merchant, had set up a Ragged School, just off the Strand in London, in 1863, when he was just 18. His pupils were the wildest and most destitute of the street children. Hogg persevered, and even set up a ‘doss house’ for homeless boys. One of his sisters was enlisted to run classes for girls, who were just as wild. The London Polytechnic, now the University of Westminster, can trace its origin to Quintin Hogg.

The idea of apprenticeships was admirable: for a fixed term, usually seven years, a master or mistress of a trade would train a young person so that he could earn his living at that trade. The master kept the apprentice in board, lodging and clothes, but had no duty to pay him, although many did in the final years of the term, when the apprentice had learned enough to be helpful. The system applied throughout society. Prosperous merchants, goldsmiths and bankers made tidy sums from the premiums paid by the parents of hopeful apprentices. The members of the Company of Watermen and Lightermen of the River Thames, who had a monopoly of river traffic, had 2,140 apprentices in 1858. Poor masters could profit from the unpaid labour of children taken from the parish workhouse. There were many scandals of parish apprentices being so ill‐treated that they ran away, or even died.

Newspaper report about a baker being charged for flogging his apprentice 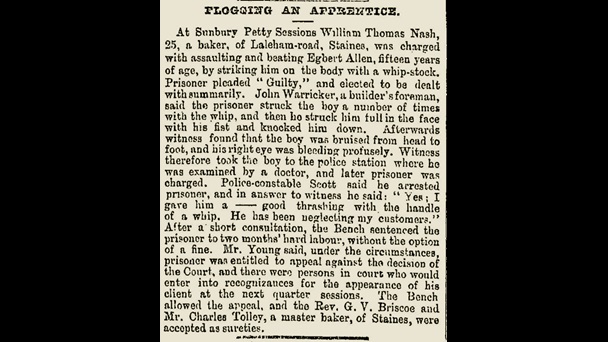 Parish workhouses were supposed to provide education for the children in their care whom they had not managed to apprentice out, but this duty was poorly observed. Some satisfied it by shunting their children to the Central London District School for Pauper Children on the outskirts of London, known as the ‘Monster School’ because of its size – it housed 1,000 pupils. (Charlie Chaplin was one, later.)

The Church of England and the non‐conformist movement both provided elementary education, and both adopted the Lancaster system whereby the brightest pupil taught what he had learned, to a group of fellow‐pupils, each of whom in turn passed it on, and so on: tidy and superficially efficient but prone to errors. Nevertheless Joseph Lancaster himself gave 1000 children some grasp of the rudiments, reading, writing and ‘reckoning’, in this way. The system was replaced by properly trained pupil‐teachers in 1846. Both establishments set up teacher training colleges, which gave their graduates the entrance to employment as well‐trained, certificated teachers.

The Jews Free School had opened in the east end of London in 1817. By 1822 it offered ‘a religious, moral and useful education’ to 600 Jewish boys and half as many girls – already almost up to the Monster School level. From 1842 to 1897 its head was Moses Angel, a brilliant polymath with a genius for teaching. By 1870 it had 2,400 pupils, and was perhaps the largest school in the world. (It still exists today in Harrow.)

The British call their most exclusive and expensive educational establishments ‘public’. Winchester College was the earliest, founded in 1382. The College of St Mary at Eton followed, in 1440. There was a burst of new foundations in the 19th century, reflecting the aspirations of the middle classes to the status symbols of the nobility and gentry. They emphasized the importance of sportsmanship and of a brand of Christianity later called ‘Muscular Christianity’. They produced self‐confident young men ready to become leaders destined for the army or the civil service, at home or in the Empire. Scholarship came lower down in their priorities.

In the upper classes it was assumed that a girl would marry and that therefore she had no need of a formal education, as long as she could look beautiful, entertain her husband’s guests, and produce a reasonable number of children. ‘Accomplishments’ such as playing the piano, singing and flower‐arranging were all‐important. If she could not find a husband she faced a grim future as a 'maiden aunt' whose help could always be called on to look after her aged parents or her siblings’ children. She might even be forced to take on employment as a governess, shut away in the schoolroom with children who had little interest in absorbing the information she was teaching. This became increasingly unattractive to intelligent women. But their future was improved when Queen’s College in Harley Street, London was founded in 1848, to give governesses a recognized and marketable qualification. No ‘accomplishments’ there. Ten more years saw the foundation of Cheltenham Ladies’ College. Other girls’ public schools followed. This increase in female education led to renewed demands for the vote. The National Union of Women’s Suffrage Societies was founded in 1897, hotly denounced by the Queen, who from her position of unimaginable power saw no reason why women should want to vote at all.

Newspaper article about female medical graduates at the University of London 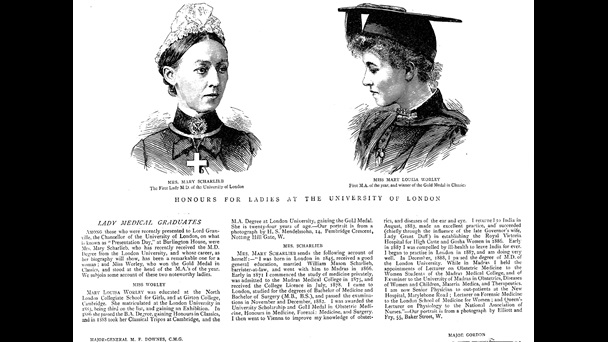 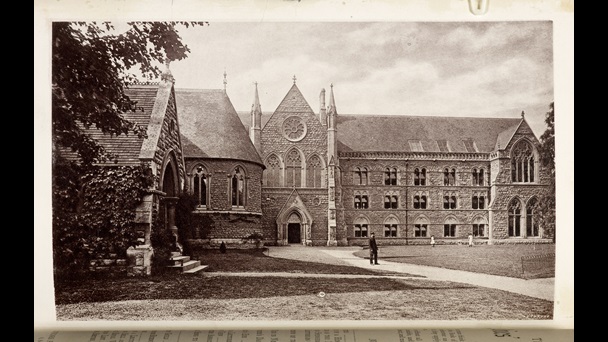 The Factory Act of 1833, had imposed a duty on employers to provide half‐time education for employees under 13. In practice, the Act was easily ignored. The break‐through came in 1870. Elected school boards could levy a local rate to build new schools providing education up to the age of 10. In 1880 the provision of elementary schooling for both sexes was made compulsory, and the age raised to 13. By 1874 5,000 ‘Board Schools’ were running. Another change in the law enabled grammar schools for girls to be founded and funded. By 1898, 90 such schools had been founded

For centuries, the ancient universities of Oxford and Cambridge had imposed three barriers to entrance. An applicant had to be 1: male; 2: unmarried; and 3: a member of the Church of England. While 2 and 3 could be evaded with a little cunning, 1 could not. Non‐sectarian colleges had been opened in London from 1828 onwards, grouped into London University in 1836. Durham University was founded in 1832, Owens College in Manchester in 1851, and Birmingham University in 1900. In 1878 London University admitted women to two colleges, Bedford College, and the Royal Holloway College opened by Queen Victoria in 1886, which was funded by the proceeds of patent medicines. But Oxford and Cambridge held out against women until the next century. 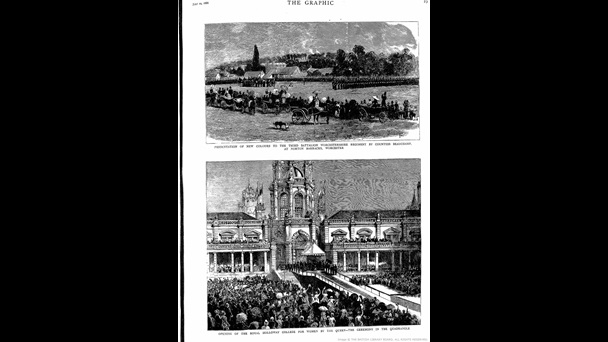