From music halls and waxworks to freak shows and pleasure gardens, Liza Picard looks at the variety of popular entertainment available in the 19th century.

No matter how poor people were, they could usually raise a penny or so for some light entertainment.

Poster advertising the strongest man on earth, at the Royal Aquarium 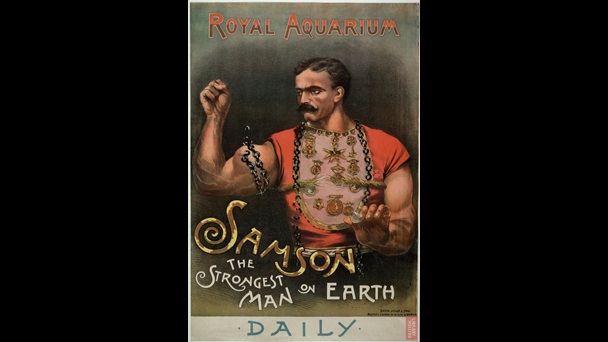 Just one penny admitted you to the back room of a public house thick with tobacco smoke. There a raucous singer delighted the audience with a repertoire of crude ballads, competing with shouts for more gin. The audience was mostly female, aged between eight and 20. An evening at a penny gaff made a pleasant change from their crowded slum rooms. By the late 1860s penny gaffs were giving way to more respectable, and comfortable, music halls and theatres. There you could sing along to your favourite popular songs, or watch entertainment as diverse as acrobats, trapeze artists, ‘operatic selections’, ‘black-face minstrels’, or can-can dancers.

Alcohol was still served during the performance but the audience was less riotous and the repertoire less gory. The price was still surprisingly low: a box at the Garrick Theatre cost only two or three pence.

Poster advertising Kairo and Olga, the black and white butterflys, at the Canterbury Theatre of Varieties, London Poster advertising Kairo and Olga, the Black and White Butterflies, 1882. 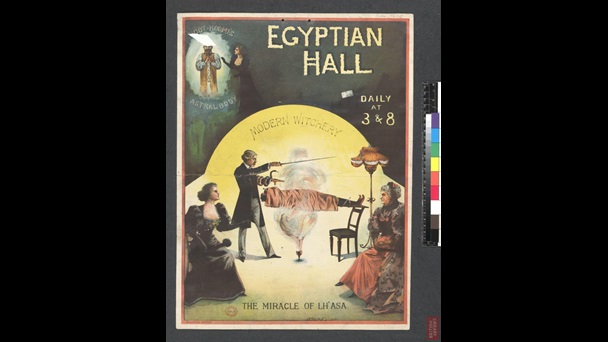 Poster for Modern Witchery, an 'illusionist' show by the famous stage acts Maskelyne and Cooke, estimated 1894.

Illusionists and spiritualists were popular attractions in theatres and exhibition halls: audiences could sit amazed as ghosts appeared on stage and automata solved mathematical puzzles. Renowned performers appeared to levitate, slice the heads off spectators and escape out of locked boxes.

Victorian audiences had no qualms about staring at human beings with disabilities or physical abnormalities. The income from being exhibited was often the only way for some of these people to live. The famous ‘Elephant Man’, whose face was badly deformed, was given sanctuary from a life of freak shows in the London Hospital, where he lived for four years till he died in 1890. 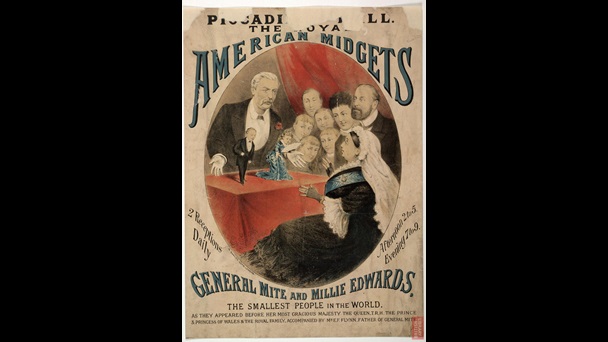 1834 saw a particularly horrid murder. Waxwork figures of the murdered woman and her four murdered children, dressed in their own clothes, had the public paying to see them in the very rooms where they had died. From 1843 Madame Tussaud’s ‘Chamber of Horrors’ documented current murders, exhibiting uncanny likenesses of the murderers within a few days of their executions. From 1888 Jack the Ripper could be seen in waxwork, even in penny peepshows. 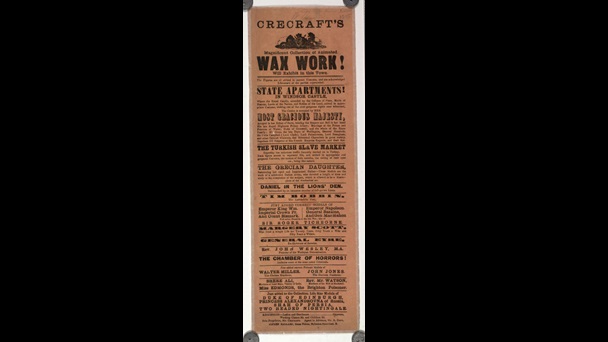 Dating from 1875, Crecraft's show promised to display waxwork figures of royalty, criminals and other famous people.

There were many small collections of animals, sometimes owned by a circus manager who trundled them along the country roads before erecting his ‘Big Top’ wherever he hoped for a profitable audience. The first famous circus proprietor, ‘Lord’ George Sanger, produced spectacular winter shows in Astley’s Amphitheatre, just over Westminster Bridge. In 1884 his Gulliver’s Travels had a cast of 700 humans, 13 elephants, nine camels and 52 horses, with miscellaneous lions, buffaloes, ostriches and kangaroos thrown in. Phineas T. Barnum’s circus in Olympia specialised in themed spectacles, such as his Venetian pageant in 1891, when the vast arena was flooded and the spectators could take gondola rides down the canals, before watching a great sea battle involving over 1,000 performers. 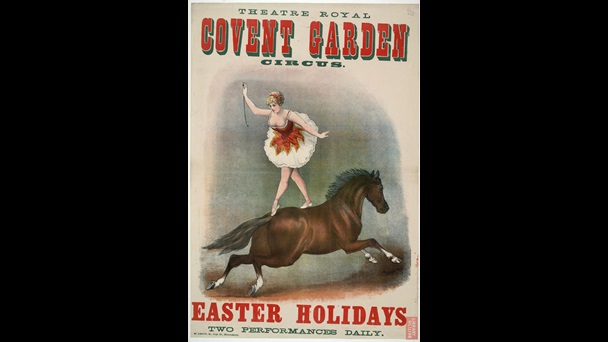 The Punch and Judy men preferred to perform outside gentlemen’s houses in the West End of London, by arrangement, rather than walking perhaps 20 miles in a day through the streets, carrying their ‘show’. Genteel evening parties might also be enlivened by the Fantoccini man’s marionettes – a type of puppet show. Companies of street acrobats could make as much as £100 a year. There were conjurors, ‘salamander men’ (fire-eaters) and sword-swallowers.

London Labour and the London Poor by Henry Mayhew Clowns strode high above the streets on stilts, and contortionists writhed on the ground. There were innumerable ballad singers and bands of differing musical abilities, but all able to produce such a noise that they were sometimes paid just to go away. As if they were not enough, Scots and Irish bagpipes wailed through the cacophony.

The Zoological Society’s collection in Regent’s Park had been open to the public since 1828 (and it still is). Among many exotic animals were two elephants, called Jumbo and Alice. The world’s first reptile house opened there in 1843. The Zoo became famous for its rattlesnakes and giraffes. In 1849 there were nearly 170,000 visitors.

Photograph of hippopotamus from The Photographic Album for the year 1855 The hippopotamus at the London Zoo, 1855.

There was another zoo, not so grand, on the other side of the river in Walworth, where as well as watching the various feeding times you could enjoy all the usual facilities of a pleasure garden.

The heyday of the London pleasure gardens had been in the previous century. The mystery is how they managed to attract such huge crowds, despite the English weather, for they were mostly out of doors. Vauxhall struggled on until 1859. (The site is now covered by the south end of Vauxhall Bridge). Advertisement for the Royal Vauxhall Gardens, 1848.

Cremorne Gardens in Chelsea opened in the 1840s, with a thousand flickering gas lights, a theatre, firework displays and an American bowling alley – claimed to be the first in London. The army made soldiers available to perform in massive pageants there. In 1855 they were re-enacting the storming of Sebastopol in the Crimean war. They advanced with their bayonets fixed. The scaffold collapsed, and they fell, impaling themselves on their bayonets. Nine years later in 1864 Goddard, the famous hot air balloonist, rose to 5,000 feet above Cremorne, but he misjudged his descent and his balloon landed fatally on a church spire in Chelsea. People being fired from cannons, ‘French female velocipedists’ (riders of early bicycles) wearing short trousers – they could all draw the crowds. By day Cremorne was thronged with respectable parties, but they went home by ten o’clock and hundreds of prostitutes took their places.

The building in Hyde Park housing the Great Exhibition had never been intended to be permanent. When the Exhibition closed, passionate public discussion broke out. What should be done with the famous Crystal Palace? Eventually a consortium of entrepreneurs, including Joseph Paxton, bought it outright. It was almost as great a marvel to disassemble it and move it to a new site, as it had been to build it in the first place. But frame by frame, pane by pane, it moved across London and up to the Surrey heights, at Sydenham. The new building, was half as large again as the Hyde Park building had been, and built to last. Its elaborate foundations housed 50 miles of hot water piping. The new building was opened by the royal couple in June 1854 just in time to catch fashionable London before the Season ended.

The aim of the promoters was to educate the British masses by a series of historical panoramas. There was an Assyrian palace, Pompeian and Roman courts, a Medieval court, an Alhambra court with a copy of the Lion Fountain, a Byzantine court and an Egyptian court containing authentic copies of the immense statues in Abu Simbel, standing 51 feet high. As well as these ‘Architectural Courts’ there was a vast interior space used for public meetings and concerts, such as the triennial Handel concerts attended by a total of 40,000 people. In 1857 Charles Spurgeon, the celebrated Baptist preacher, addressed a congregation of 23,654.

Popular amusements included ascents by the official Crystal Palace Astronaut in his gas-filled balloon. For £5, a considerable amount in those days, you too could look down on London from a mile high, or more. From 1865 Charles Brock began his magnificent weekly firework displays.

The 200-acre park contained three lakes, in one of which was an island housing models of ‘Extinct Animals’ made as lifelike as the then state of pre-historical knowledge allowed. The Iguanodon alone was 34 feet long, made of four iron columns, tiles, bricks, hardcore and 38 casks of cement.

Paxton was given free rein in designing magnificent fountains and water works, but they were so expensive to operate that they were turned on only for very special occasions. His vast expenditure contributed to the growing financial problems of ‘The People’s Palace’. During its first 30 years the average annual attendance was two million people. But gradually the high-minded aims of the original promoters had to give way to commercial pressure.

The People’s Palace was completely destroyed by fire in 1936.