Liza Picard examines how industrialisation altered the building of cities and affected the different social classes living within them.

The growth of cities

London had been for centuries the biggest city in England, indeed in Europe. Industrial development fuelled the expansion of cities such as Birmingham, Sheffield, Manchester, Liverpool and Newcastle. Although the ‘industrial revolution’ was not as instantaneous as sometimes imagined, there was a continuous drift away from the countryside into manufacturing centres. In 1837 there were just five cities outside London with populations of over 100,000; by 1891 this number had grown to 23. In 1851 more than half the population of England lived in towns, and many of them worked in the new factories. Tall factory chimneys were supposed to draw the smoke away, but all too often it lay as a thick blanket, smothering any fresh air and blackening the buildings. 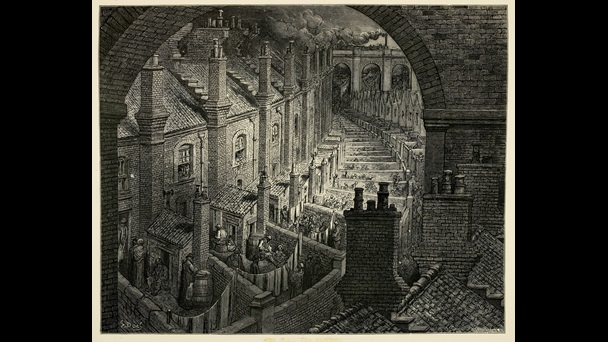 Artistic representation of overcrowded housing in London, from London, a Pilgrimage by William Blanchard Jerrold with illustrations by Gustave Doré, 1872.

The Official Illustrated Guide to the Great Western Railway

The factories of Messrs Fairbairn and Sons in Manchester, 1860.

The affluent middle classes lived outside the city, in leafy suburbs, usually to the west of the city, so that the prevailing west wind could blow the smells and smoke of industrial development away from middle class noses. By 1870 the fashionable architectural style for domestic mansions had changed from the classical, or the Gothic baronial still popular in Scotland, to a neo‐Elizabethan style, or a ‘Vernacular’ vision of tiles and terra cotta. The proud owner would expect central heating, and piped water up to at least the bedroom floor, and flushing lavatories (known as water closets), and even, perhaps, electric light, alongside his Elizabethan panelling. Space was needed for several carriages – open collapsible-topped carriages for the summer, closed carriages for the winter – as well as the vehicles of visitors. Male servants were often housed over the coach houses. Women servants lived in the attics or in the basement. The extensive gardens would display flower beds, replaced as if by magic (but in fact by a posse of gardeners, working overnight) before they faded. Brilliant colours and elaborate rose gardens were much admired. Smooth green lawns were mowed by a patent lawn mower pushed by a gardener, or a bigger model pulled by a pony wearing neat little boots to prevent marking the turf. 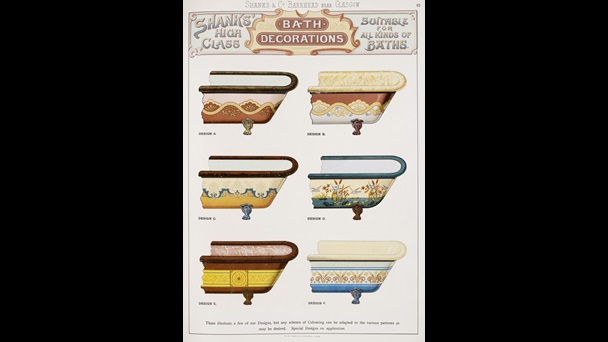 Advertisement for designer baths targeted at the affluent middle classes, 1896.

Respectable artisans lived nearer to their employment, often in terraces of pleasant cottages, with piped water and gas lighting. Each had a water closet, or an earth closet, in an outhouse. Wallpaper in charming flowery patterns was affordable by all. Cooking would be done on an open fire, or on a kitchen range, with built‐in oven and several hotplates.

Advertisement for Jennings' Sinks from Collection of Catalogues of Sanitary Appliances 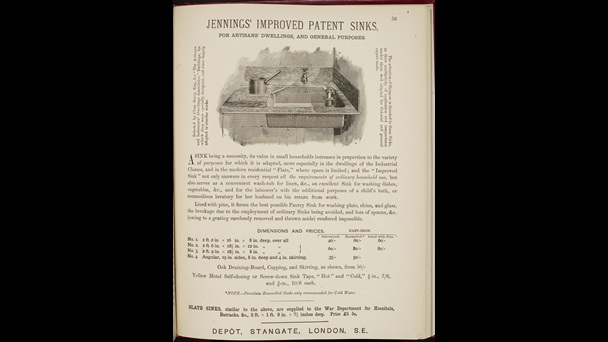 But the slums housing the labour force of the new industrial cities were not so idyllic. Miles of terraced cottages were thrown together cheaply, with no foundations, and no amenities. Water came from a stand pipe in the neighbourhood, which flowed only a few hours per week. There might be a lavatory or an earth closet, in a yard serving a group of families. When it overflowed landlords typically turned a blind eye, and the yard filled with sewage. The most notorious slums were in Leeds, without even a yard. Rows of ‘back‐to-back’ houses were built, with one, or sometimes two, rooms on each of two storeys, with thin party walls on all three sides – at the back as well as the sides. Light and air came only through the windows and the door in the front. No wonder that there were frequent fights among neighbours.

Some employers determined that conditions for the poor inner‐city worker must improve. The pioneer had been Robert Owen, who built New Lanark, in Scotland, for his workers, in 1799. His utopian dream lasted less than 30 years, but he had shown the effect of decent living conditions on the health and morals of working people In 1853 Sir Titus Salt founded Saltaire, a model village, near his textile works in Bradford. In 1893 Cadbury Brothers, the Quaker chocolate‐making firm, commissioned an ideal village for their workers, and others, called Bournville, near Birmingham. In 1899 Lever Brothers followed suit, with a housing estate for their workers called Port Sunlight, beside their soapmaking factory on the Mersey. Sir Ebenezer Howard’s book Tomorrow: a Peaceful Path to Real Reform published in 1898 inspired the Garden City movement of the 20th century. 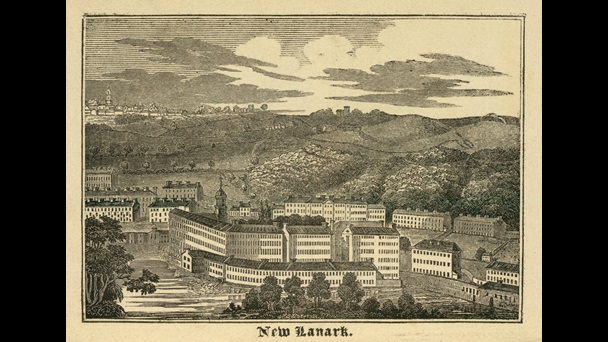 New Lanark, Scotland, a town built for factory workers in 1799.

Illustration of Saltaire, a model village founded for textile workers near Bradford 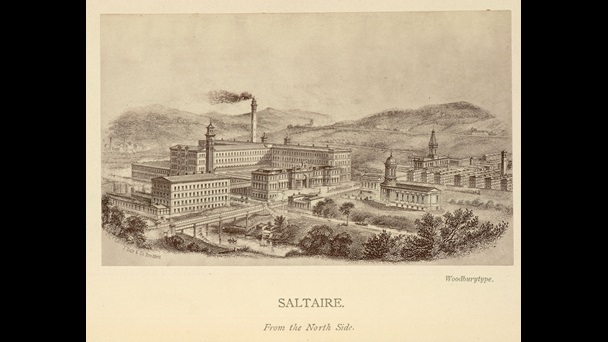 Saltaire, Bradford, a model village built for textile workers in 1853.

The greatest London benefactor was an American merchant and banker, George Peabody, who settled in London in 1843. He devoted massive amounts of his fortune to model buildings scattered throughout inner London, for poor Londoners ‘of good character’. Tenants were expected to observe the rules. They had to have been vaccinated, with all of their family. There were shared lavatories on each landing, and baths and laundry facilities on the top floor. For the times, Peabody Buildings were imaginative, hygienic and efficient. There was general agreement that slums should be cleared, but little thought of rehousing the displaced residents. Piecemeal legislation was passed with optimistic titles, but few houses built.

The middle and upper classes owned their own homes, but for the rest, the rent collector was a familiar figure. Yet the hope of owning their own house inspired the formation of local Building Societies, especially in the manufacturing towns in the north of England.

There was as yet no town planning. Municipalities could use a rich variety of architectural styles. The Law Courts in London were a Gothic extravaganza in stone, perhaps an unconscious reflection of the nature of English law. The splendid Law Courts in Manchester displayed a riot of red brick and terracotta. The classical order was favoured by the builders of St George’s Hall in Liverpool. Derby was the first city to have a municipal Botanic Garden. Birmingham soon followed suit. In London, the royal parks were open to the public but there was a lack of green space in the north east corner, so Victoria Park was opened in 1845, with fountains and follies just as good – well, nearly – as anything Joseph Paxton would ever create.