The Great Exhibition, housed within the ‘Crystal Palace’, embodied Prince Albert’s vision to display the wonders of industry from around the world. Liza Picard looks at the exhibits, the building and the ideas behind the project.

If you took an omnibus along London's Knightsbridge in the summer of 1851, you would see an astonishing sight. Glittering among the trees was a palace made of glass, like something out of the Arabian Nights. It was as tall as the trees, indeed taller, because the building arched over two of them already growing there, as if, like giant plants in a glasshouse, they had been transplanted with no disturbance to their roots. A shower of rain washed the dust from the glass, and made it glitter all the more. Nothing like this had been seen in London, ever. It was the Great Exhibition of the Works of Industry of All Nations.

The Great Exhibition was the brain-child of Queen Victoria's husband, Prince Albert. Britain was at peace. The Chartists had meekly delivered their Petition to the House of Commons in three cabs, and gone home. Albert could write to his cousin King William of Prussia, that ‘we have no fear here either of an uprising or an assassination. England was experiencing a manufacturing boom. This was the time to show off, on the international stage. 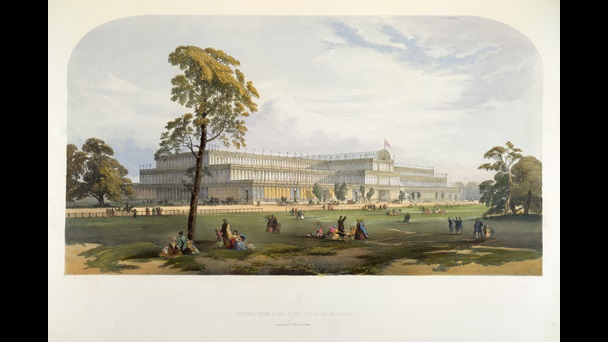 'General View of the Exterior of the Building' of the Great Exhibition.

There were some 100,000 objects, displayed along more than 10 miles, by over 15,000 contributors. Britain, as host, occupied half the display space inside, with exhibits from the home country and the Empire. The biggest of all was the massive hydraulic press that had lifted the metal tubes of a bridge at Bangor invented by Stevenson. Each tube weighed 1,144 tons yet the press was operated by just one man. Next in size was a steam-hammer that could with equal accuracy forge the main bearing of a steamship or gently crack an egg. There were adding machines which might put bank clerks out of a job; a ‘stiletto or defensive umbrella’– always useful – and a ‘sportsman’s knife’ with eighty blades from Sheffield – not really so useful. One of the upstairs galleries was walled with stained glass through which the sun streamed in technicolour. Almost as brilliantly coloured were carpets from Axminster and ribbons from Coventry. 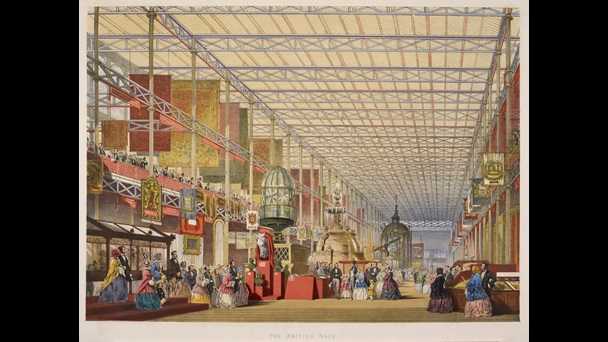 The British contribution to the Great Exhibition.

There was a printing machine that could turn out 5,000 copies of the popular periodical the Illustrated London News in an hour, and another for printing and folding envelopes, a machine for making the new-fangled cigarettes, and an expanding hearse. There were folding pianos convenient for yachtsmen, and others so laden with curlicues that the keyboard was almost overwhelmed. There was a useful pulpit connected to pews by rubber tubes so that the deaf could hear, and ‘tangible ink’ for the blind, producing raised characters on paper. A whole gallery was devoted to those elegant, sophisticated carriages that predated the motorcar, and if you looked carefully you could find one or two velocipedes, the early version of bicycles. There were printing presses and textile machines and agricultural machines. There were examples of every kind of steam engine, including the giant railway locomotives…In short, as the Queen put it in her Diary, ‘every conceivable invention’.

Canada sent a fire-engine with painted panels showing Canadian scenes, and a trophy of furs. India contributed an elaborate throne of carved ivory, a coat embroidered with pearls, emeralds and rubies, and a magnificent howdah and trappings for a rajah’s elephant. (The elephant wearing it came from a museum of stuffed animals in England.)

The American display was headed by a massive eagle, wings outstretched, holding a drapery of the Stars and Stripes, all poised over one of the organs scattered throughout the building. Although the general idea of the Exhibition was the promotion of world peace, Colt’s repeating fire-arms featured prominently, but so did McCormick’s reaping machine. The exhibit that attracted most attention had to be Hiram Power’s statue of a Greek Slave, in white marble, housed in her own little red velvet tent, wearing nothing but a small piece of chain. This was of course allegorical.

The largest foreign contributor was France. She exhibited sumptuous tapestries, Sevres porcelain and silks from Lyons, enamels from Limoges and furniture. Unlike British exhibits in the same class, many of which were sadly lacking in taste, the visual impact of the French display was stunning. It was backed up by examples of the machinery used to produce these beautiful objects. France was a worrying competitor in the markets on which Britain prided itself, especially in textiles.

The Russian exhibits were late, having been delayed by ice in the Baltic. When they did arrive, they were superlative. They included huge vases and urns made of porcelain and malachite twice the height of a man, and furs and sledges and Cossack armour. Chile sent a single lump of gold weighing 50kg, Switzerland sent gold watches.

Amid all these wonders, there were two which caught the public imagination. The first was the famous Koh-i-Noor diamond. It was supposed to be of inestimable value, but most people found it disappointing, although they crowded round to see it. It lay in a safe like a large parrot-cage, and on special days it was lit by a dozen little gas jets, but it still failed to sparkle. (It was not until it had been skilfully cut that its beauty emerged. It is now part of the Crown Jewels).

The Illustrated Exhibitor: Guide to the Great Exhibition 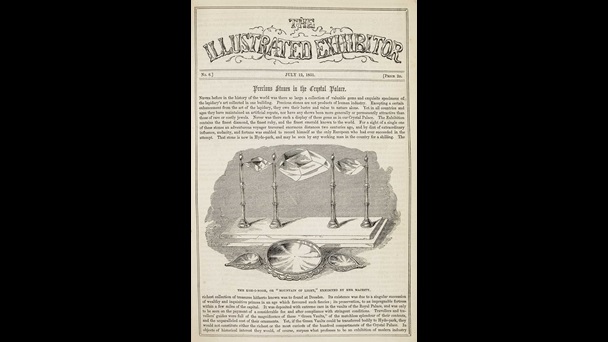 Illustration and description of the Koh-i-Noor diamond from India which fascinated visitors to the Great Exhibition in 1851; its ownership became hotly contested when Punjab was proclaimed part of the British Empire.

The interior of the building

The famous fountain, standing approximately in the middle of the building, was made of four tons of pink glass, 27 feet high, provided a useful meeting place, as well as cooling the atmosphere. There was a police desk for lost children and umbrellas. No alcohol was sold, but there were various areas where light refreshments were available, provided by Messrs Schweppes. And for the first time ever, ‘waiting rooms and conveniences’ were provided, where you could by spending just one penny have the blessing of a private cubicle. 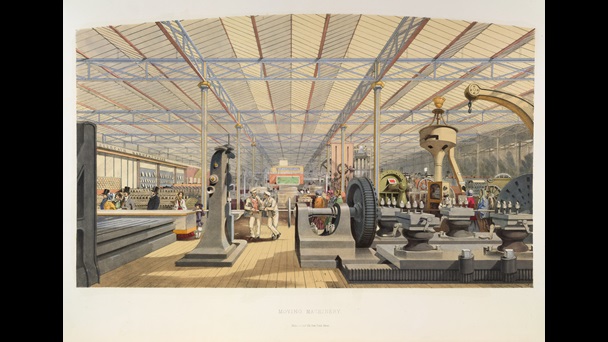 Illustration of the interior of the building.

The building itself was the most breathtaking exhibit of all. Paxton’s innovative design used modules of glass and iron, that could be fabricated off site and in due course taken apart again, since the building was only temporary. Work began on 1 August 1850. By December 1850 more than 2,000 men were working on the site. By means of ingenious machines invented by Paxton, 80 men could fix over 8,000 panes of sheet glass in a week. Over 1,000 iron columns supported 2,224 trellis girders, 4,000 tons of iron, 30 miles of Paxton’s newly-invented guttering and 202 miles of sash bar. The 16 vast semi-circular ribs of the transept arch, made of laminated timber, took just one week to fix. The flooring was of boards set half an inch apart, so that machines could sweep the dust through the spaces at the end of each day, but in practice the trailing skirts of the women visitors did the job splendidly. 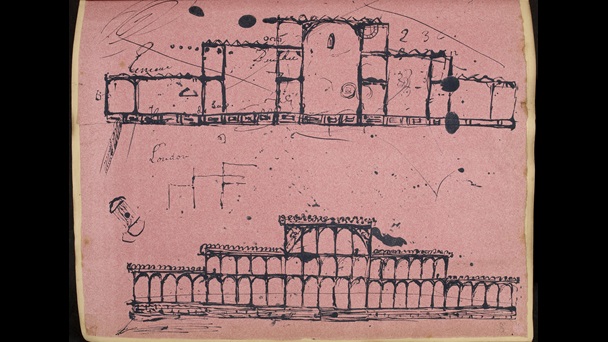 Queen Victoria opened the Exhibition on 1 May, on schedule. She became a frequent visitor. At first the price of admission was £3 for gentlemen, £2 for ladies. They came in throngs, in their elegant carriages, leaving them at a separate entrance to be valet-parked. Saturday mornings were reserved for invalids. From 24th May the masses were let in for only a shilling a head. And they came in their thousands, factory workers sent by their employers, country villagers sent by benevolent landowners, strings of schoolchildren. The country men came wearing their best smocks, staring at all the Londoners and foreigners. The travel agent Thomas Cook arranged special excursion trains. A third-class return ticket from York cost only five shillings. One old lady even walked, all the way from Penzance. There was even a mysterious Chinese man in full mandarin robes, who stepped forward as the royal procession passed. He was treated, just in case he was important, as a visiting dignitary, but he turned out to be the captain of a Chinese junk moored in the river.

By the time the Exhibition closed, on 11 October, over six million people had gone through the turnstiles. Instead of the loss initially predicted, the Exhibition made a profit of £186,000, most of which was used to create the South Kensington museums. Those were Albert’s memorial. His Queen commissioned the statue of him, sitting under a gilt canopy opposite the Royal Albert Hall with a copy of the Exhibition catalogue on his knee.