The working classes and the poor

Liza Picard examines the social and economic lives of the Victorian working classes and the poor.

The Victorians liked to have their social classes clearly defined. The working class was divided into three layers, the lowest being 'working men' or labourers, then the ‘intelligent artisan’, and above him the ‘educated working man’. In reality, things were not so tidily demarcated.

The Old Closes and Streets of Glasgow 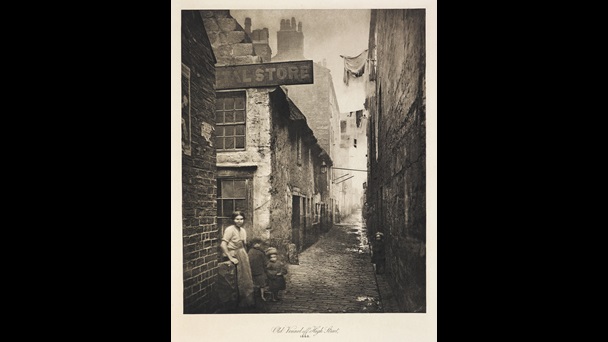 Photograph of a Glasgow slum by Thomas Annan, 1868.

A skilled London coach-maker could earn up to five guineas (£5, five shillings) a week – considerably more than most middle class clerks. This was the top of the working class pyramid. The railways generated employment for porters and cab-drivers. The London omnibuses needed 16,000 drivers and conductors, by 1861. Conductors were allowed to keep four shillings a day out of the fares they collected, and drivers could count on 34 shillings a week, for a working day beginning at 7.45 and ending often past midnight. A labourer’s average wage was between 20 and 30 shillings a week in London, probably less in the provinces. This would just cover his rent, and a very sparse diet for him and his family. During the late 1800s there were probably about 30,000 street sellers (known as costermongers) in London, each selling his or her particular wares from a barrow or donkey-cart. The journalist Henry Mayhew recorded the array of goods for sale: oysters, hot-eels, pea soup, fried fish, pies and puddings, sheep’s trotters, pickled whelks, gingerbread, baked potatoes, crumpets, cough-drops, street-ices, ginger beer, cocoa and peppermint water as well as clothes, second-hand musical instruments, books, live birds and even birds nests. Some specialised in buying waste products such as broken metal, bottles, bones and ‘kitchen stuff’ such as dripping, broken candles and silver spoons. Most middle class and working class households depended on these street sellers, who had regular predictable beats, and made a fair living.

Men could earn pennies as porters, as long as they stayed clear of the associations which had a monopoly of porterage in London. Boys could hold horses’ heads while the driver took a break, or sell newspapers or fast food in the streets. The ‘mudlarks’ of both sexes and all ages waded thigh‐deep in the filthy toxic Thames mud to retrieve anything they could sell. Dogs’ turds could be collected and sold to the tanneries. Discarded cigar butts could be recycled and marketed as new.

Sweeping a path across the filthy streets for a well‐dressed pedestrian could earn a few pennies, legally. Begging might make more illegally, especially if the beggar woman could use – even hire – a small child. Sometimes the children were blinded or maimed, to loosen the purse‐strings of passers‐by.

If a man had enough initiative and energy after a long working day, he could attend evening courses on scientific subjects or Latin or shorthand at a Mechanics’ Institution, or at one of the Working Men’s Colleges founded in 1854. Newspapers such as The Penny Newsman were affordable, often shared between friends. Trade Unions needed intelligent self-educated men as Union officials. Massive civil engineering works such as railways and docks needed foremen, while factories needed overseers to keep the belts and wheels turning profitably. A working woman could learn French at a Working Women’s College. It might come in useful if she progressed up the ladder of domestic service to become a ladies’ maid.

When you have no prospect of a living wage, or sickness or disability or market forces prevent you from working, what are you to do?

The Poor Law Amendment Act of 1834 established ‘workhouses’ in place of the old poor houses. The Act was framed to deter undeserving applicants, and the criterion was sometimes inhumanly hard. The workhouse might deny the starving applicants even the bare shelter it provided. A 70-year-old seamstress with failing sight was told to go away and find herself some work because ‘she was young enough to work’. If a family was admitted, all its members would be separated, and might never see each other again. 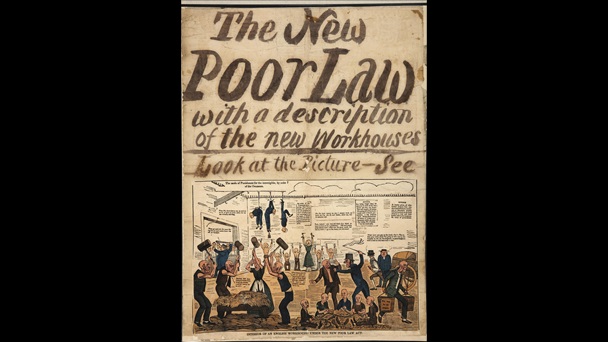 The workhouse itself would provide the work. The sentence of hard labour imposed on convicts was applied equally to male paupers in the ‘casual ward’, who were physically weak, and often unaccustomed to manual work. An experienced convict might earn 9 pence a day at stone-breaking. A clerk, reduced to the workhouse perhaps because of a gap between jobs, had to try to break granite rocks with a heavy hammer, in an open shed with no protection from frost or heat, when he had never held anything heavier than a pen. Another suitable occupation, in the eyes of the authorities, was oakum-picking: unravelling lengths of tarred rope, for use in calking the seams of battleships. A convict’s strong, thick-skinned hands could manage that; the clerk’s soft fingers failed to produce the required quantities. For all this, the pauper received only an allowance of coarse bread: £4 a week if he was married, plus £2 for each child.

Comic song about the workhouse 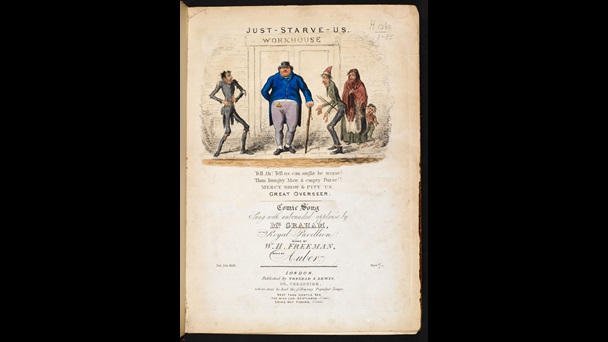 Illustration for a song about the workhouse contrasting a miserly and well-fed overseer with starving, ragged clothed inmates, estimated 1843.

Workhouse food was just enough to keep the inmates from starvation. They were clothed, and even, occasionally, washed. The children were entitled to some elementary education, but this was often ignored by the workhouse keeper. There was some rudimentary medical care – interesting mainly as the first example of medical care provided by a state-funded organisation, in which one may perhaps see the germs of the National Health Service a century later.

The shipbuilding yards and the new docks in London and the north east required huge labour forces, but demand was unpredictable. Every morning crowds of men congregated at the gates hoping for a day’s work, at three pence an hour, but the docks or the shipyards might be closed for lack of orders, or by bitter weather and the men had no recourse but charity or the workhouse.

'The Distress in the East End of London' from The Graphic 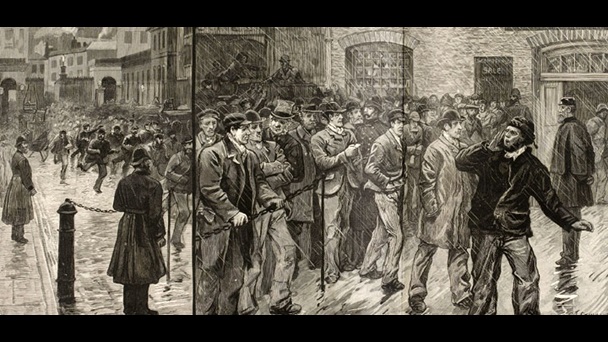 Labourers at London docks waiting for employment from The Graphic, 1886.

For women, there were always places in the ‘slop trade’, producing cheap mass clothing and uniforms for the forces and for prisons. The pay was pitifully low. A woman might make one shirt in a long day, sewing by hand in poor light – she had to buy her own candles – and she would be lucky to earn six shillings for a dozen. After 1856 the advent of the sewing machine improved the lot of some women, but not all had access to a machine, and the new technique required was daunting. 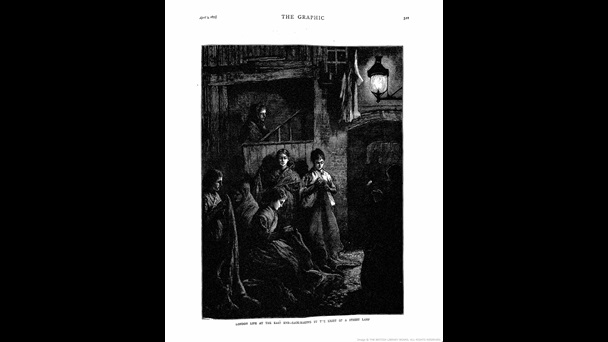 Illustration of women sack-making in poor conditions in London's East End, from the Graphic, 3 April 1875.

It was no wonder that so many women took to prostitution, when the alternatives were so grim. Entire streets in the slums of London were inhabited by prostitutes. Many girls viewed a few years ‘on the game’ as a sensible way to build up a little capital to invest in a small business later, but their future was often cut short by sexually transmitted diseases. Some of the great hospitals had a few beds for them in a ‘foul ward’. They might be admitted to a ‘Lock Hospital’ which specialised in such cases. But there was no known cure for the sexually transmitted disease syphilis. Once the acute phase was over and she was discharged, a woman had no choice but to return to the streets and take up her previous life, infecting a new wave of customers. There was a ready market for young virgins. In 1885 the journalist W T Stead ‘bought’ – under careful supervision – a 13‐year‐old girl, just to show his readers how easy it was. The girl was in due course returned to her parents, still a virgin, but Stead became famous and the public could no longer ignore this shameful trade. Three years later a series of gruesome murders began in the east end of London. The victims were all prostitutes. The murderer was never discovered, but the public named him ‘Jack the Ripper’ because of his habit of eviscerating his victims. 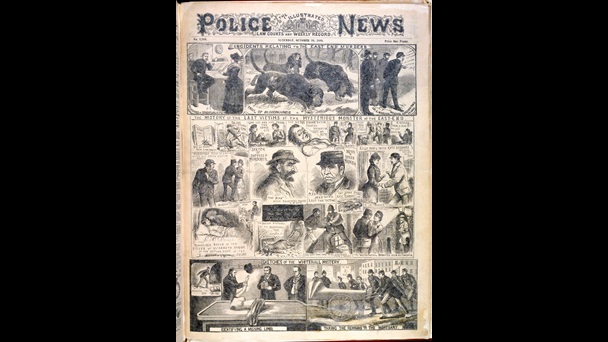 Article about 'Jack the Ripper' from the Illustrated Police News, 1888.

A number of charitable individuals and societies attempted to 'save' prostitutes, who were mostly outcast and desperate. Novelist Charles Dickens had a try at setting up a home for 'fallen women', as prostitutes were known. This home, like other societies with high‐sounding titles, offered the girls a new life, work and a safe home in which they were treated with kindness, but only at the cost of giving up their personal freedom, which they would not always accept. The most celebrated redeemer of prostitutes was the Prime Minister, W E Gladstone, whose reputation was saved from unsavoury innuendoes only by his well-known personal integrity.

It was becoming clear that the new Poor Law Act was not succeeding in its aim, despite successive tightening of the screws. Nor could private charities stem the tide of the destitute. Very gradually, the idea took root that the relief of poverty should cease to be an individual, local duty and become a national responsibility. Article in the Liverpool Mercury about a meeting of the 'Fallen Women', 1860.