During Queen Victoria’s reign Britain was the most powerful trading nation in the world. In this article, Liza Picard explains how Victorian advances in transport and communications sparked a social, cultural and economic revolution whose effects are still evident today. 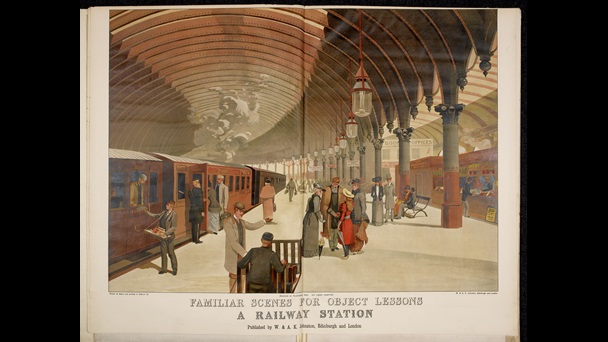 The railway network flourished between 1830 and 1870. By 1852 there were over 7,000 miles of rail track in England and Scotland, and every significant centre could rely on rail communication. Britain's railways transformed the landscape both physically and culturally, producing new opportunities for commerce and travel, and fuelling industrial and economic expansion. Goods could be transported at unprecedented rates, and it was British technologies and engineers that were responsible for railway construction throughout the world.

'The Railway Station' from The Graphic 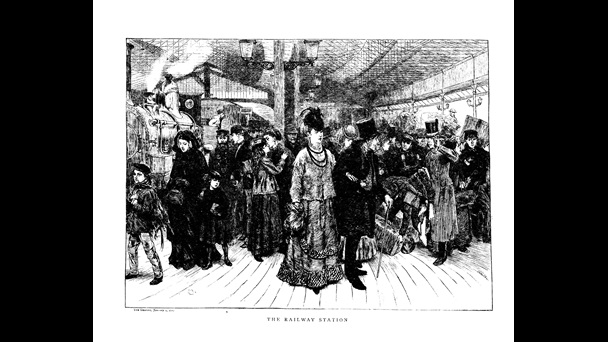 At home, major cities, such as Birmingham, Liverpool, Manchester and Bristol were were now interconnected. Until the creation of the railway, the fastest speed known to man had been that of a galloping horse. Now, an express train could reach speeds of 80 miles an hour. Newspapers printed in London in the early hours could be loaded on a train to be sold that morning ‘hot from the press’ in the provinces. Fresh produce such as milk or meat could be rushed from rural producers to city consumers on a daily basis. Conan Doyle’s famous detective Sherlock Holmes could send a letter at breakfast time and receive a reply before lunch the same day – something previously unimaginable. 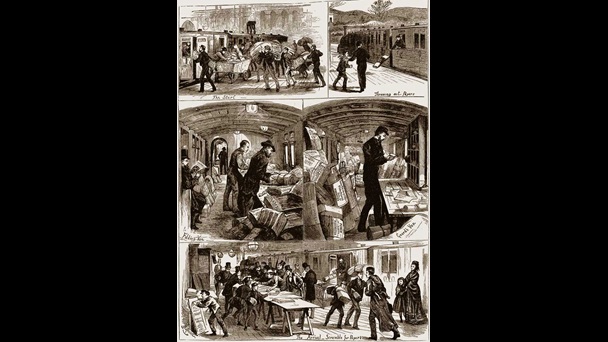 Railway and steam-boat excursions' from the Morning Chronicle Some people feared that such speed might endanger the human frame. Queen Victoria asked the driver to go more slowly than his average speed of 40 miles an hour on her journey from Slough to London, finding the experience terrifying. She travelled in comfort. The first class was tolerably comfortable, but packed excursion trains provided transport only. The third class coaches were like converted cattle trucks, open to the weather. Nevertheless an intrepid provincial traveller could attend a public execution in London, or the Great Exhibition, and be home the same day.

The History and Description of the Great Western Railway 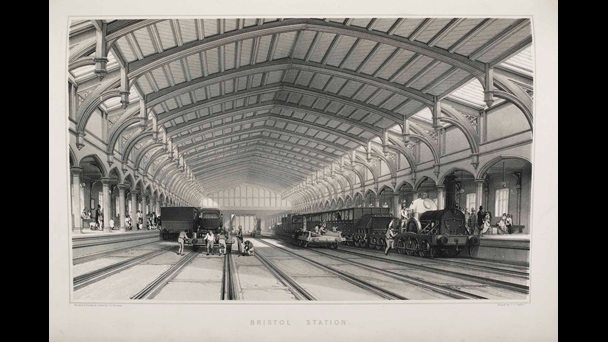 The Official Illustrated Guide to the Great Western Railway Railways were financed by private capital, so enthusiastically that their popularity led to ‘railway mania’ in which spectacular fortunes were made – and lost, since some of the projects were never commercially viable.

Newspaper report of a new royal train to carry the Queen from Windsor to London, 1897 Communications had rapidly improved since the days of the first stage-coaches. By 1830 22,000 miles of road across England and Wales had been ‘turnpiked’. This refers to a moveable barrier, sometimes armed with ‘pikes’ or barbs, across a road, turned aside only after a toll was paid. Many turnpike-keepers’ cottages can still be seen beside rural roads. Heavy loads were more economically carried by the canal network which had developed piecemeal since 1757, linking the growing industrial centres to the ports, and to London, with an important nexus at Birmingham. Some spectacular routes were created, tunnelling through mountains and soaring across valleys on viaducts, with locks, sometimes in series, to manage changes in level.

Meanwhile the traffic in inner cities was becoming chaotic. The answer that those astonishing Victorians came up with was obvious: move the whole problem underground. In 1863 the first underground railway in the world was built, connecting Paddington station – the London rail terminus for many prosperous commuters to the City – to Farringdon Street, just minutes away from the Bank of England.

Photographs showing the construction of the London Underground's Central Line Isambard Kingdom Brunel (1806-59) pioneered railway engineering, and even designed his Great Western Railway to connect at Bristol with his trans-Atlantic steamship The Great Western, to carry travellers easily between London and New York. The railway termini were magnificent structures. Brunel’s Paddington Station, with its soaring arches and unimpeded space, is the cathedral of the railway age.

Constructing the Waterloo and City Line, The Graphic, 16 November 1895 Beside the rails ran the telegraph wires. To begin with, they were confined to railway matters, but their usefulness was soon perceived by the business community, and as the Victorian world expanded, the telegraph kept pace. Another of Brunel’s ships, The Great Eastern, played a major part in laying thousands of miles of submarine cable. It reached almost every part of Queen Victoria’s vast empire. When Queen Victoria pressed a button in the telegraph room in Buckingham Palace, on 22 June 1897, to send her Diamond Jubilee message – ‘Thank my beloved people. May God bless them’ – she was speaking to nearly a quarter of the population of the earth.