Dr Gus Casely-Hayford (SOAS and King’s College London) introduces a thousand years of West African history, looking at the power of story and symbol in the past and today.

Story, symbol and word in the creation of West Africa’s states

In 2012 an uprising in northern Mali led to the occupation of the ancient city of Timbuktu by Islamist forces, in the shape of the Ansar Dine organisation. The city, one of the jewels of the medieval Mali empire, is heir to a rich intellectual heritage, embodied in its venerated buildings and copious manuscript collections. Its communities grew up on stories of the Mali empire, listening to songs of its origin and possibly reading the histories of its main protagonists.
So when the occupiers began to destroy Timbuktu’s historic tombs and threatened to burn its manuscripts, the local population were not about to give up their heritage without a fight. This heritage not only served a valuable religious function, but has also become important in defining peoples and holding these communities together – a fact no doubt also recognised by Ansar Dine as it attempted to destabilise the region. Over the months of the invasion, Malians risked their lives to secrete and smuggle documents to safety, doing what they could to protect historic buildings and defend the ancient libraries. Although they were not always successful, many of the manuscripts were indeed saved.
Today, each of the shrines damaged during the uprising has been rebuilt, the 14th century mosque that is the symbolic heart of the city has been restored, and the perpetrators of the destruction are beginning to be brought to justice at the International Criminal Court. Even in the bleakest periods of occupation enough of the population of Timbuktu would simply not bow to the men of Ansar Dine to allow their history to be wiped away. And anyone who has visited this part of Mali will understand why stories, narrative, histories are of such importance. 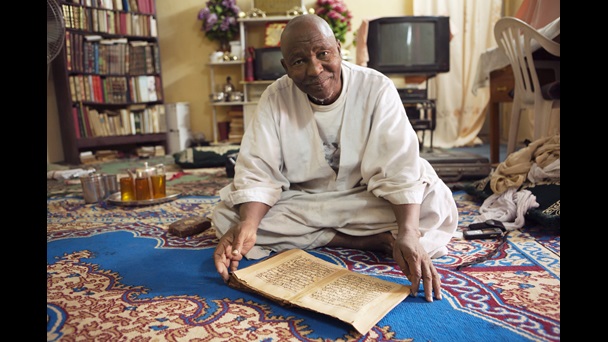 This photograph shows Imam Mahmoud Baba Hassèye, members of whose family have been scholars and imams for generations.

View images from this item  (1)
Sunjata and the Mali empire
The Mali empire dominated a large area including all or part of modern Mali, Mauritania, Senegal and Guinea for over two centuries (c. 1235–c.1464). It was a state that was founded upon testimony. And even today traditional songs and stories of origin remain an important part of everyday culture. The romantic, singing historian, or griot, continues to be a respected figure, as they have been since the early 13th century when the Mali empire came into being. It is through the poems and songs of griots that we know the early history of this region.It is through their oral accounts that we can trace how the kingdom was forged from the smouldering embers of ancient Ghana (c. 350–c. 1235). These are stories that recount the building of an empire from utter chaos, sung praises that capture the strategic and diplomatic victories of the kingdom’s founder, Sunjata Keita, as his empire took shape. It is a form of history that has given birth to generations of famed griots and the stories mythologised in their music. 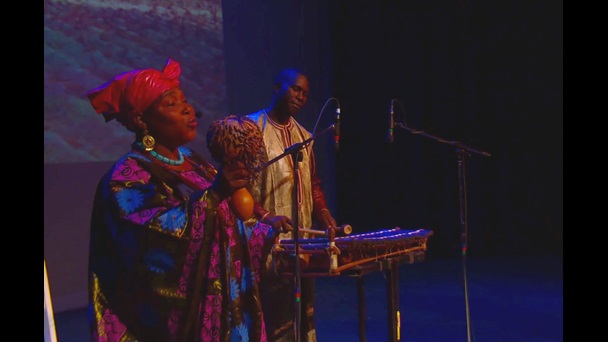 This photograph shows a live performance of the West Africa Sunjata epic, October 2014.

In the early 14th century, Mansa (Emperor) Musa ascended the Mali throne. He was the head of a state with gold-rich trade links and political alliances across much of the Western Sahara. He was a man with no rivals, and a seemingly limitless wealth. Mansa Musa set his mind to making Timbuktu his new cultural capital. He was a radical head of state; he sought to augment his kingdom’s highly sophisticated systems of recording oral histories by encouraging the introduction of writing in Arabic. It was not something that he did by halves. He constructed his new city around a great centre of learning, with magnificent libraries, which drew large numbers of scholars into the region.

Timbuktu became a prosperous centre of learning, attracting scholars and students from across West Africa and beyond.  This almost fanatical focus on knowledge and historical narrative and the celebration of historians became integral to the civic and legislative models of many West African states that emerged over the following centuries – each one in its own way determined to define legitimacy through similarly strong intellectual and narrative traditions. René Caillié 's account of his travels included this engraving of the city of Timbuktu.

A thousand years of history

One of the foremost of these states was the Songhai empire, which replaced the Mali empire as the dominant power in Mali and the western Saharan region in the middle of the 15th century, until it was overthrown by Moroccan forces in 1591. The illustration below is a rare early landscape of West Africa, based on a drawing from life. It shows the Songhai village of I’sé, located at the foot of the Hombori mountain range in present-day central Mali. The picture, drawn in the 1850s, post-dates the height of the Songhai empire’s power.

Travels and discoveries in North and Central Africa 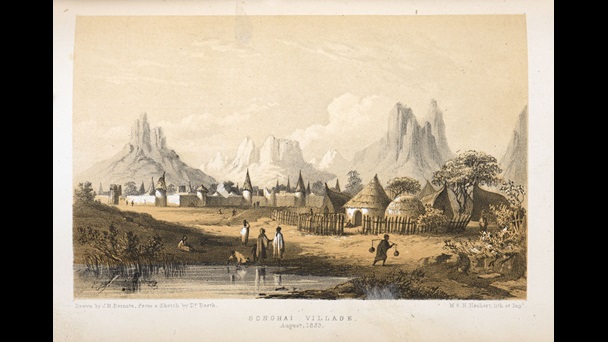 This five-volume work by Heinrich Barth (1821–65) records his travels between Tripoli and Timbuktu in 1850–55.

To the east of these Sahelian states, the Kanem-Bornu empire emerged in the 9th century and endured a thousand years. To the west, other powerful states included the Wolof empires during what, in Europe, constituted the later Middle Ages. In the forest regions to the south, the Kingdom of Ife had become the centre par excellence of ancient ritual and sacred power. After the arrival of Europeans on the West African coast, in the 15th century, trade routes moved southwards and communities increasingly settled in and cleared the forest to set up new kingdoms. 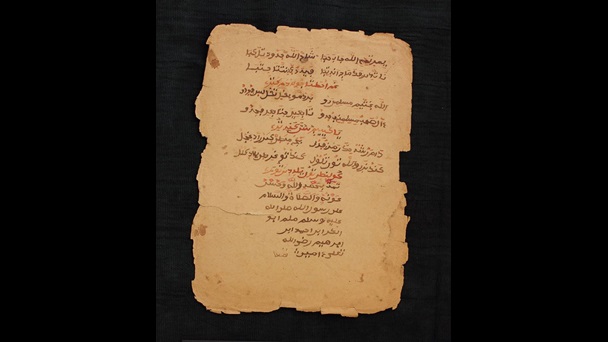 This 19th-century religious poem in the Fulfulde language is by the Muslim poet, scholar and educator Naana Asmaa’u (1793–1864).

Usage terms Photo by Anneke Breedveld. From the collection of Muhammad Bashir Abubakar of Yola in Northern Nigeria.  Endangered Archives Programme and Arcadia.

The Asante kingdom
When in the early eighteenth century the Asante state found a fragile foothold in the deeply forested region of what is today central Ghana, their founder-king (or Asantehene), Osei Tutu, crafted a strong political unity through the conscious institution of shared stories and shared symbols of state. Symbols such as adinkra were of vital importance to the exercise of royal power in the Kingdom of Asante, Ghana.

Osei Tutu’s state grew voraciously, overcoming and assimilating the neighbouring peoples and forcing the conquered into the back-breaking toil of turning dense forest into arable land. It was an economy based upon constant military expansion, funded by gold and driven by indentured labour, but its cultural coherence was dependent, like Mali, on unifying stories, and material symbols of shared narrative.
The illustration below shows Adum Street, close to the royal palace in the Asante capital of Kumasi, Ghana, in 1816. The image shows the adampan, open porches fronting onto the street in which the kingdom’s officials carried out their business and received members of the public. Cloth, carved stools, gold-weights and carving were each deployed in building an ineluctable sense of narrative to hold the burgeoning state together. The objects that represented this history took on a very special place in Asante society. And after the British forcibly toppled the Asantehene at the end of nineteenth century, in the absence of a traditional leader, it was to these symbols of narrative continuity that people turned, as the Golden Stool, the cloth and traditional stories became even more a focal point. Although the British had vanquished the Asante army, the invaders never captured the Stool, the symbolic heart of the nation. For many in a time of national crisis, this was a source of great pride. 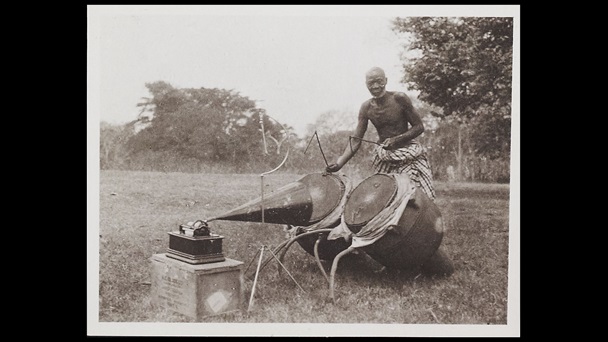 Kofi Jatto performing phrases of text on the Asante atumpan drums in Ghana in 1921.

West Africa is a region that does not boast a long tradition of museums, but at certain critical times in history when their material heritage has been under threat, the broader populace has demonstrated that they are the committed ultimate custodians of their heritage. With that role, there has evolved an understanding, be it in oral, written or symbolic form, that it is a history that will be fought for. 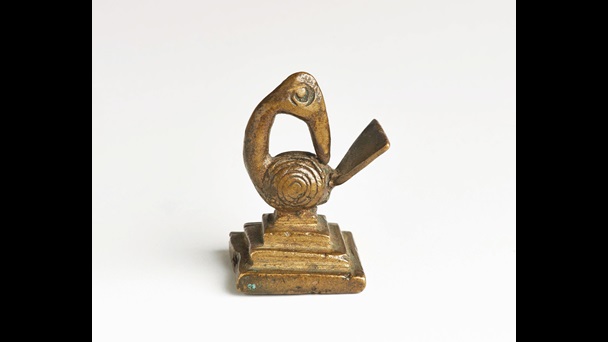 This is a popular symbol in Ghana, indicating the importance of history and of learning from the past.