British Library curator Janet Topp Fargion introduces the influential Ransome-Kuti dynasty.
Fela Anikulapo Kuti (1938-97), born Olufela Olusegun Oludotun Ransome-Kuti in Abeokuta, Nigeria, was a major force in Nigerian and international politics for roughly 40 years from the 1960s. He was a singer, brass and keyboard player, bandleader and pioneer of the Afrobeat musical genre. He was strongly influenced by his family – his grandfather Josiah Jesse, an Anglican priest, his mother Funmilayo, an activist and feminist, and his cousin, writer and political activist, Wole Soyinka. 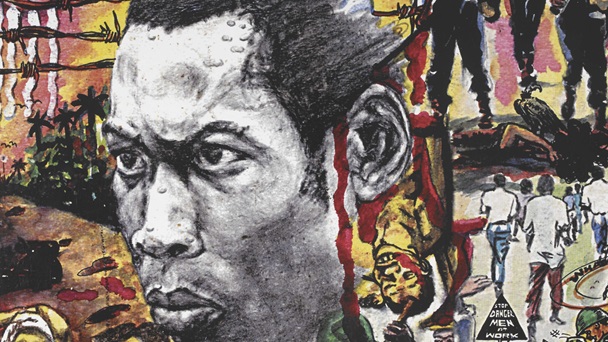 Arguably the epitome of a protest singer, Fela used words as a form of protest and resistance and also as a means of reflecting and commenting on political events. He was flamboyant and maverick, communicating his revolutionary politics through his songs.

Fela was the son of Reverend Israel Oludotun Ransome-Kuti (1891-1955), a Protestant minister, school principal and the first president of the Nigeria Union of Teachers. The Reverend was himself son of a clergyman, Josiah Jesse Ransome-Kuti (1855-1930) also a musician. Fela’s mother was Francis Abigail Olufunmilayo Thomas (1900-78), a teacher, political campaigner and a leading voice on women’s rights in Nigeria and beyond.
Fela was educated at the Abeokuta Grammar School. He was sent to London to study medicine – his two brothers Beko and Olikoye were medical doctors – but he changed direction and chose instead to hone his musical skills at the Trinity College of Music. Once back in West Africa, he took a trip to Ghana to further develop his musical ideas.
The 1960s saw many African American musicians travelling to West Africa. Then soul and funk of artists like Otis Redding and James Brown in particular gained popularity there. Bringing these influences together in 1968, Fela coined the term Afrobeat to describe his musical style. At the end of the decade he took his Afrobeat to the United States on tour where he was introduced to the Black Power movement. This significantly influenced his music and his politics.
With his music Fela aimed to reach the widest possible Nigerian audience by singing in English and in Pidgin, in a country with over 500 living languages. Nigerian Pidgin (Naija), a form of Creole spoken by tens of millions of people throughout the country, was an effective means of galvanising Nigerians into action on the issues Fela wanted to speak out about. As a Pan-Africanist, singing in these languages also meant his messages could be heard more broadly in Africa and the rest of the world. His use of the internationally appealing Afrobeat helped to ensure his messages were heard very widely.
The themes of his songs were often developed during what Fela called his yabi sessions which he conducted at his Lagos nightclub, the African Shrine. Audience members could raise issues for debate and discussion and these would germinate into songs. The term yabi is also used to describe the long spoken sections within his songs during performance.
Highly educated, an eloquent speaker, and an influential musician and writer; Fela was a Kuti through and through.

Fela’s grandfather was an Anglican priest who attended the Church Missionary Society Training Institution in Abeokuta. He was musically talented and saw music as a powerful means of attracting people to the church. He was one of the first West Africans to begin translating Christian hymns into Yoruba, one of Nigeria’s major languages. He also composed new Christian songs in Yoruba, understanding the potential for music to increase awareness of Christianity. Some of his compositions were recorded by Zonophone Records in the UK in the early 1920s.

http://sounds.bl.uk/resources/westafrica/AV20a%2006%20Kuti%20Yoruba%20[T8357W].mp3
Update Required To play the media you will need to either update your browser to a recent version or update your Flash plugin.
Jesu olugbala ni mo f'ori fun e (I give myself to Jesus the Saviour) in Yoruba, with piano accompaniment. Zonophone 3394, recorded in 1922

JJ was also an effective politician. He had developed a reputation for his sense of justice and fairness which gained him great local respect. He was ordained a priest in 1897 and for a time acted as district judge in Egba, Ogun State in south-western Nigeria. During the uprisings in 1914, when Egba came under British rule, and the subsequent Egba Revolt (1918) against the imposition of taxation, JJ is reputed to have been an instrumental mediator between opposing sides. He also calmed tensions that arose at the same time between local people and the African, Christian elite.

Fela clearly inherited his grandfather’s musicality and sense of conviction, even if not his Christian beliefs – Fela was a fervent practitioner of Yoruba religious rituals.

Fela’s mother was also a notable political campaigner, particularly on women’s rights. She was involved in a great variety of organisations, including the National Council of Nigeria and the Cameroons (where she was also President of the Women’s Association of the organisation’s Western branch), and the Women’s International Democratic Federation, springing from the French resistance movement in 1945 and backed by the former Soviet Union. Influential on both a national and international level, she was one of a number of West African female activists, including Adelaide Casely-Hayford and Mabel Dove Danquah for instance1. She was an educator, like her husband Reverend Israel Oludotun Ransome-Kuti, together with whom she was a founding member of the Nigerian Union of Teachers. She worked ardently to raise literacy levels amongst local ‘market’ women where she was made more aware of the injustices they faced. This resulted in the formation of the Abeokuta Ladies’ Club in 1944 (later the Abeokuta Women’s Union) which rose to a membership of some 20,000 local women, later going national as the Nigerian Women’s Union.

While much of her work championed women’s rights, her activism sprang from a grassroots perspective and she acted in the interests of the poor and disadvantaged, whether male or female. She travelled widely including to China where she met Mao Tse-tung and she was in the company of such people as Nelson Mandela and Pablo Picasso as winner of the Lenin Peace Prize, which was awarded to her in 1970. Labelled a communist in the United Kingdom and the United States, she nevertheless insisted throughout that she had the ‘improvement and liberation of Nigerian women’ as her primary objective2. In the late 1960s she was awarded an honorary doctorate from the University of Ibadan in Nigeria and was entered into the International Women’s Who’s Who (1969).

She founded the Abeokuta Women’s Union in collaboration with Grace Eniola Soyinka, her sister-in-law and the mother of another internationally renowned member of the Kuti dynasty, Wole Soyinka.3

Wole Soyinka is one of Africa’s most well-known authors as a playwright, poet, essayist and prose writer. Like his cousin Fela, Soyinka’s work has consistently and openly challenged Nigerian authorities. Again like Fela, popular and public airing of such political views landed him in prison more than once, with much of his time spent in solitary confinement. Undaunted, Soyinka has remained politically active and highly vocal throughout his career, expressing his thoughts, beliefs and creativity in a large, often complex, and always sophisticated body of literary works.

Soyinka has referred to Fela as the ‘scourge of corrupt power, mimic culture and militarism’4  – many of Soyinka’s own works have centred on such themes. Perhaps this has resulted from what would appear to be similar backgrounds and upbringing. They were born in the same area of Nigeria (Abeokuta) with significant Christian influences, maintained a strong connection with indigenous Yoruba belief systems, with parents involved in teaching and political activism and received similar education in Nigeria and in the UK, where they became aware of Pan-Africanist issues. Importantly, they were born within a few years of one another and both lived through the ethnic and regional tensions that arose from the discovery of oil in south-eastern Nigeria in 1965, the ensuing Civil War and the various military regimes in power between 1966 and 1979, and later from 1983 to 1993. 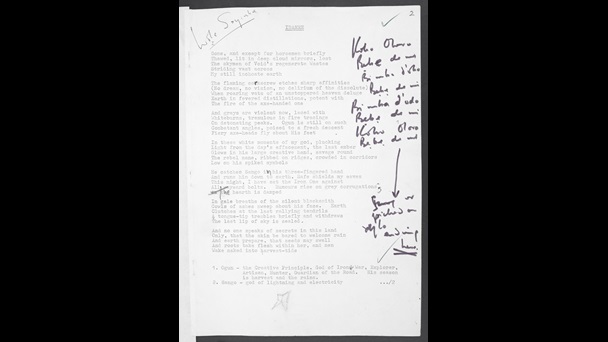 First page of Wole Soyinka’s annotated typescript of ‘Idanre’ (1965), Idanre being the place where the Yoruba god Ogun is believed to live. The poem recounts the Yoruba cosmology about the origin of the world and the heroic deeds of Ogun in particular.5

View images from this item  (4)
Most similar of all is the power both Kuti and Soyinka saw in speaking out – Fela through his Afrobeats and Wole Soyinka through his pen. 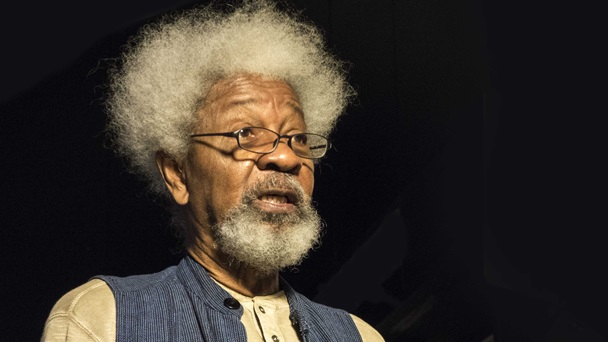 Professor Wole Soyinka, cousin of Fela Kuti, at the opening of West Africa: Word, Symbol, Song at the British Library. 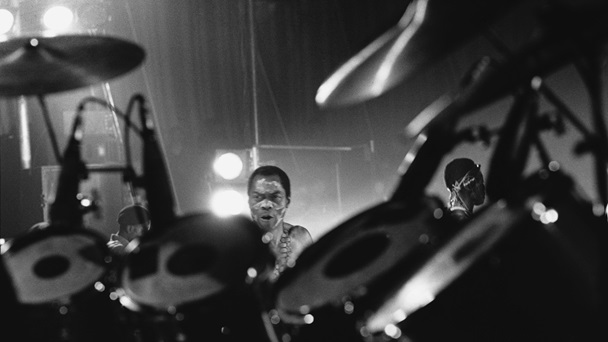