Aerial warfare during World War One

From Zeppelin airships to propaganda leaflet drops, Bernard Wilkin explores the significant role of aerial warfare in World War One – where it was used on a large scale for the first time.

Aerial warfare was by no means a First World War invention. Balloons had already been used for observation and propaganda distribution during the Napoleonic wars and the Franco-Prussian conflict of 1870-1871. Planes had been used for bombardment missions during the Italo-Turkish war of 1911-1912. Yet, aerial warfare during the First World War marked a rupture with these past examples. It was the first conflict during which aircraft were involved on a large scale and played a significant role.

At the beginning of the war, the usefulness of air machines was met with a certain amount of scepticism by senior officers on all sides. In fact, aeroplanes were mostly involved in observation missions during the first year of the conflict. However, rapid progress enhanced aeroplanes’ performance. In 1915, the Dutch aircraft manufacturer Anthony Fokker, who was working for the Germans, perfected a French invention allowing machine-gun fire through the propeller. This discovery had a revolutionary consequence: the creation of fighter aircraft. This type of plane gave an edge to the Germans during 1915. Their air superiority was to last until April 1916, two months after the beginning of the battle of Verdun. Thereafter, Allied dominance was gained through the creation of French fighting squadrons and the expansion of the British Royal Flying Corps. The control of the sky was to change hands again in the first half of 1917 when the Germans reformed their squadrons and introduced modern fighters. During April 1917, nicknamed ‘bloody April’, the British suffered four times more casualties than the Germans. But things were on the move on the Allied side. Successful reorganisations in France and Britain brought back air control for good until the Armistice. 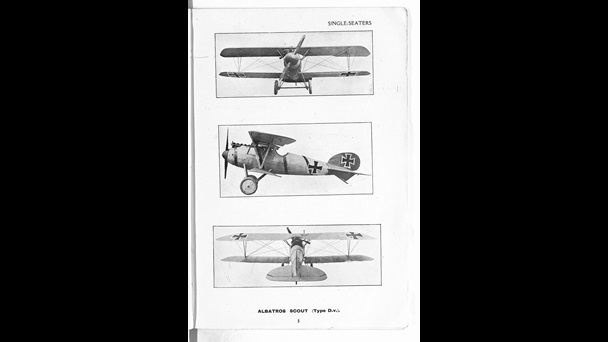 Published as a training aid for identifying German aircraft, this image shows the Albatros Scout D.v. from different angles.

During 1915, another important step was taken when the Germans organised strategic bombing over Britain and France by Zeppelin airships. In 1917-18 ‘Gotha’ and ‘Giant’ bombers were also used. This new type of mission, targeting logistic and manufacturing centres, prefigured a strategy commonly adopted later in the century. Inevitably, bombardments of ports and factories were quickly adopted by all sides and led to civilian deaths. Although the number of civilians killed by aerial machines remained small during the war, these air raids nonetheless caused widespread terror. Yet, planes were on occasions a welcome sight. Indeed, aircraft and balloons were used by the Allies from 1915 to 1918 to drop propaganda leaflets over occupied France, Belgium and Italy in order to combat German psychological warfare. Propaganda was also dropped on German soldiers in an attempt to demoralise them.

Impressions of the airship raids over London, as recorded by boys in London 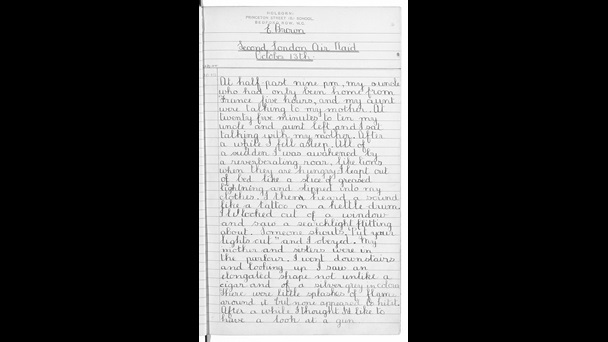 A schoolchild's account of the German airship raids on London, 8th September and 13th October 1915.

Held by© The copyright status of Add MS 39257-39258 IMPRESSIONS of the airship raids over London by various persons is unknown. Please contact copyright@bl.uk with any information you have regarding this item.

Long live Italy! From now on every citizen is an integral part of Italian national defence 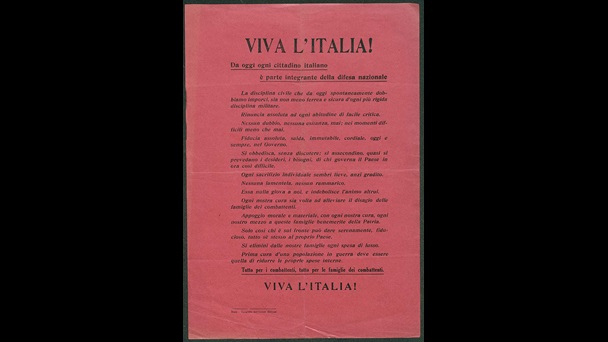 Leaflet published in 1916 compared citizens to soldiers by promoting the model behaviour of the army.

Aviators in the spotlight

In 1915, aviation caught the attention of the press both in Germany and in the Allied countries. Fighting pilots credited with at least five victories became known as ‘aces’ and were admired as celebrities on Home Fronts until the end of the conflict. This phenomenon illustrates the ability of war culture to penetrate all aspects of society, but also underlines a paradox: heroes of the air became glamorous because they were clean and deemed noble while their infantry counterparts remained an anonymous mass, stuck in the mud of the trenches. This romanticized admiration by the public of flying aces was a cause of tension and jealousy between army and air force.

Aviation and the war effort

Was aviation in the First World War invaluable to the war effort? The question has been controversial since the Armistice. Collective memory has retained an admiration for the contribution made in the air on the Western Front, but it should be remembered that aviation also played a role in other theatres of operation. Indeed, planes were used on a smaller scale on the Eastern Front, in the Balkans and even briefly in the German colony of Tsingtao in China. Most of the nations involved in the war, including countries such as Austria-Hungary, Belgium, Bulgaria, Italy, Russia and the United States, developed their own air forces. It is certain that aerial photography was hugely helpful for artillery, the most devastating weapon of the war. Tactical air support had a big impact on troop morale and proved helpful both to the Allies and the Germans during 1918 when coordinated with ground force actions. But such operations were too dependent on the weather to have a considerable effect. Meanwhile, fighting planes had a significant impact in facilitating other aerial activities. Aviation made huge technological leaps forward during the conflict. The war in the air also proved to be a field of experimentation where tactics and doctrines were imagined and tested. Air force units were reorganised on numerous occasions to meet the growing need of this new weapon. Crucially, aerial strategies developed during the First World War laid the foundations for a modern form of warfare in the sky.