Changing lives: gender expectations and roles during and after World War One

Considering the roles of both men and women during World War One, Susan R Grayzel asks to what extent the war challenged gender roles and to what degree society accepted them.
The First World War was a cataclysm that disrupted countless lives. As a modern, total war, it brought men and women into active battle zones across Europe as well as in parts of Africa and Asia. New technology further extended the borders of the war. Air power made it possible to launch attacks against civilian populations at some distance from traditional frontlines, and U-boats sank passenger ships, such as the Lusitania in 1915, that were loaded with men, women, and children crossing the Atlantic. In addition, albeit with less novelty, invading armies ended up occupying swathes of territory. Civilian women and men in Belgium, the north and east of France, Serbia, and parts of the Russian empire among other locales came under the control of occupying powers.

Photograph of a mother and child wearing gas masks 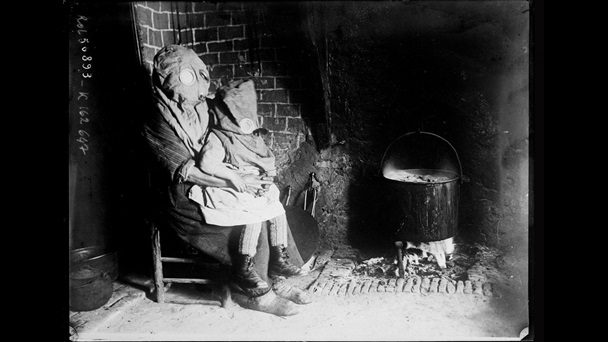 Postcard of German zeppelin that crashed on Fanø 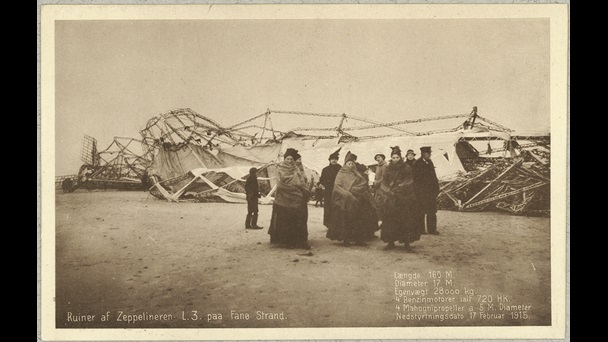 Postcard showing the German Zeppelin L3 after it crashed on the Danish island of Fanø, 1915.

Men, women, and the state

Even where women did not live with such daily reminders of war, states and agents of civil society invested considerable energy in trying to connect women who were not near war zones with the front lines via propaganda. In addition, the scope and duration of the war meant that governments enlisted women in the war effort by reorganising basic aspects of their lives. By rationing, governments could alter the food women could obtain and eat; by imposing censorship, they tried to restrict the information they could know or share. The waging of the war placed enormous expectations upon able-bodied men in the prime of life to serve in the military and upon their female counterparts to contribute to the war effort in many ways, in addition to maintaining their domestic roles.

The letter from the front - those who read 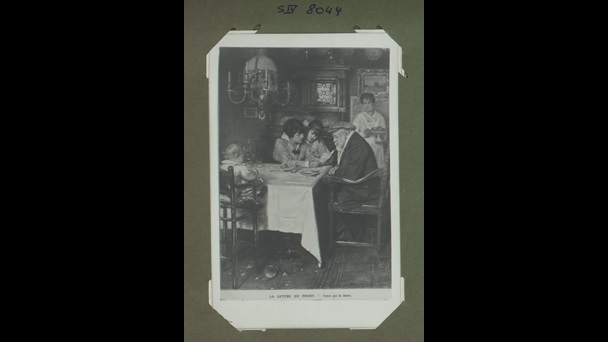 Postcard showing a family gathering around a table to read a letter sent from the Front.

Did assumptions about gender roles alter during the war?

Despite the upheavals that affected many women and men, basic ideas about gender remained fairly consistent throughout the war. Warring states defined the essence of male service to the nation as combat. Even those men too young or old or ill to wield arms were expected to support the war, and some men in key industries were required to stay at their jobs in order to ensure the output of basic supplies. Most nations also called upon and celebrated women as mothers, the representative of family life and domesticity. Indeed, women’s designated role as guardians of morality meant that in most countries, ‘separation allowances’ – funds paid to soldiers’ dependents – were tied to their good behaviour, including in some cases demonstrating their sobriety and fidelity. Women could support the military effort and the nation’s men in uniform as nurses, female military auxiliaries, ambulance drivers, farm workers, and factory labourers as well as in many other occupations, something evident in many of these documents. However, they were also celebrated for their quiet heroism in keeping the home intact whilst their men were absent. For all of women’s extensive and varied war work, most public celebrations of their contributions underlined that such labour was part of ‘doing their bit for the duration’.

As was the case with all societal expectations about gender roles, individuals could take on or reject these assumptions. Some women publicly embraced new access to traditionally male occupations and had no wish to relinquish them when the war was over. Others faced economic, physical and psychological challenges that could make them eager for a return to pre-war conditions. Some men found meaning in their military service and sacrifices; others found themselves traumatised by the carnage unleashed by modern weaponry. Millions of men faced devastating injuries from poison gas, machine gun fire, and powerful artillery shells. Dissent from gender norms was perhaps more easily tolerated for women as they took on roles that had previously been the work of men (in munitions factories for example). Male dissent from gender norms was not so readily accepted. While pacifist or antimilitarist actions by women could be understood, if not excused, as stemming from expectations that women desired peace above all, similar expressions by men, such as their taking on the new role of the conscientious objector in Britain, could call into question their very masculinity.

Women's war work in maintaining the industries of the United Kingdon Publication detailing the work carried out by British women on the home front.

The legacy of the war and assumptions about gender roles

Because the war destroyed so many lives and reshaped the international political order, it is understandable to view it as a catalyst for enormous changes in all aspects of life, including ideas about gender and the behaviour of women and men. The messy reality of the lives of individual men and women is much harder to generalise about. There were visible changes in European politics, society, and culture but also a certain degree of continuity. Most notably, the aftermath of the war witnessed women gaining voting rights in many nations for the first time. Yet women’s full participation in political life remained limited, and some states did not enfranchise their female inhabitants until much later (1944 in France). Imperial subjects and racial minorities, such as those in the United States, continued to be unable to exercise their full political rights. Socially, certain demographic trends that were prevalent before the war persisted after it. Family sizes continued to shrink despite renewed anxiety about falling birth rates and ongoing insistence on the significance of motherhood for women and their nations. Economically, returning men displaced many women from their wartime occupations, and many households now headed by women due to the loss of male breadwinners faced new levels of hardship. Women did not gain or retain access to all professions, and they did not come close to gaining equal pay for comparable work.

The Call, from Canada in Khaki 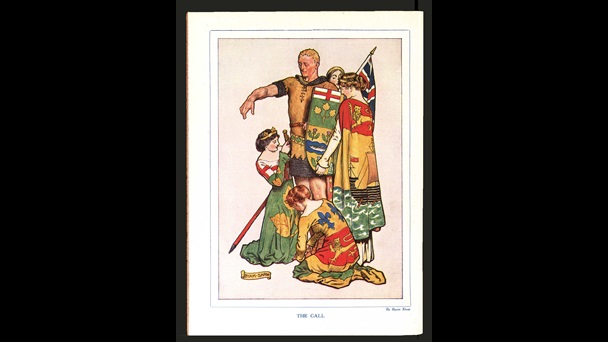 Illustration entitled 'The Call' depicting an idealised Canadian man being prepared for war by women representing the Provinces of Canada, 1916.

Cultural change may be the hardest to gauge. Certain norms of Western middle-class femininity all but disappeared, and women’s visible appearance before 1914 and after 1918 markedly differed – with many women having shorter hair and wearing shorter skirts or even trousers. New forms of social interaction between the sexes and across class lines became possible, but expectations about family and domestic life as the main concern of women remained unaltered. Furthermore, post-war societies were largely in mourning. The extent to which the process of rebuilding required the combined efforts of men and women in public and perhaps even more so in private shows the shared human toll of this extraordinary conflict.