Professor Xu Guoqi provides an overview of China’s involvement in the First World War, including the role of the Chinese Labour Corps (CLC) on the Western Front and the impact of the peace conference on China’s future.

Even today, many people know little, if anything, about China’s deep involvement in the First World War. Perhaps it is surprising to learn that there was even a battlefield in China, where the British fought against German troops. The Chinese port city of Qingdao (Tsingtao) had been under German control since 1898. When the war broke out in Europe in 1914, Britain and its ally Japan were determined to kick Germany out of East Asia. After intensive fighting, German troops in Qingdao were forced to surrender in November 1914 and the Allies took possession of the colony.

Photographs taken during the Siege of Tsingtao, 1914 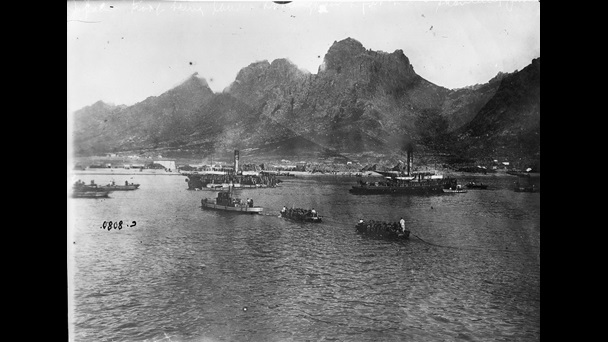 This photograph shows Japanese troops landing at the nearby port of Longkou during the siege.

Why did China become involved in the First World War?

The Qingdao battle might have been beyond China’s control. Yet China’s citizens and government were not only interested in the First World War, but also took major initiatives to participate in it. To understand China’s Great War, we first have to pay attention to events that unfolded from 1895 onwards. After China was defeated by Japan in the First Sino-Japanese War (1894–95), the Chinese were deeply worried about their nation’s future, fearing that it could disintegrate. In response, they pursued and adopted desperate measures. In the early 20th century, China abolished Confucian ideology which had served as the official religious-political doctrine for over 2000 years, and destroyed the dynastical system which had ruled the country since 221 BCE. Both systems were held responsible as sources of China’s weakness. In their determination to strengthen China, the country was declared a republic in 1912. We have to keep in mind that republicanism was still a radical political system and few nations were truly republics at that time.

By adopting these dramatic measures, the Chinese hoped to turn China into an equal member in the ‘family of nations’. Since the Opium Wars of the 1840s, China had existed as a semi-colonial nation under the control of western powers and, later, Japan. The outbreak of the First World War presented China with a great opportunity to confront the existing world order which had been hostile to China for many decades and recover its long lost sovereignty, including control of Qingdao and Shandong province. China announced its neutrality but, motivated by these possibilities, made a secret attempt to declare war on Germany as soon as the war started. However, countries including Britain and Japan, who both had economic and diplomatic interests in China, blocked China’s official entry into the war. The Chinese felt even more threatened when Japan presented to their government the ‘Twenty-one Demands’, which extended direct Japanese control and in effect revealed Japan’s intention to colonise Chinese provinces.

1915 onwards: the role of Chinese labourers and the Chinese Labour Corps

Determined to create a place for China within the postwar world order, in 1915 the government adopted a creative strategy which they called ‘yigong daibing’, or to use workers as soldiers. At the same time as the Chinese reeled under Japan’s Twenty-one Demands, the war in Europe dragged on, casualties increased and the French and then British faced a ‘manpower’ crisis. China’s offer of an unlimited supply of labour was an astonishing opportunity for both countries. To support their war efforts, the French and British started to bring Chinese workers to France as early as 1916 to dig trenches, repair tanks and transport supplies, among other tasks. In total, roughly 140,000 Chinese workers arrived on the Western Front, many travelling via Canada. Those recruited by the British were collectively known as the Chinese Labour Corps (CLC). Among all the countries involved, China sent the largest number of men and its workers remained in France the longest. Many under British supervision would stay until 1920, while most men under the French stayed until 1922, working to clear live ammunition, exhume bodies from battlefields and carve gravestones for war cemeteries. Although their contribution has since been largely forgotten, these Chinese labourers were critical to the British and French war efforts and about 3000 men lost their lives. The Chinese were regarded as especially skillful at trench digging and thus played a crucial role by maintaining battlefield infrastructures in a war dominated by trench warfare.

Photographs of the Chinese Labour Corps in France 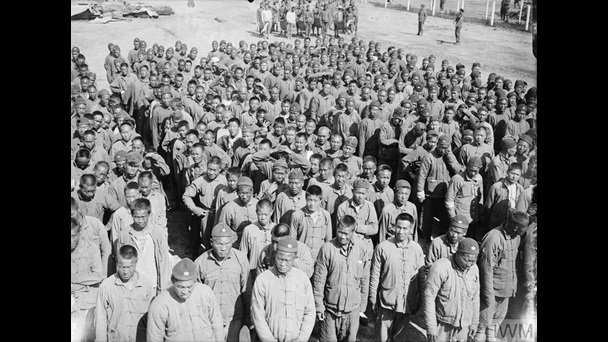 Roughly 140,000 Chinese workers worked for the Allies on the Western Front.

Usage terms This item is available to be shared and re-used under the terms of the IWM Non Commercial Licence. 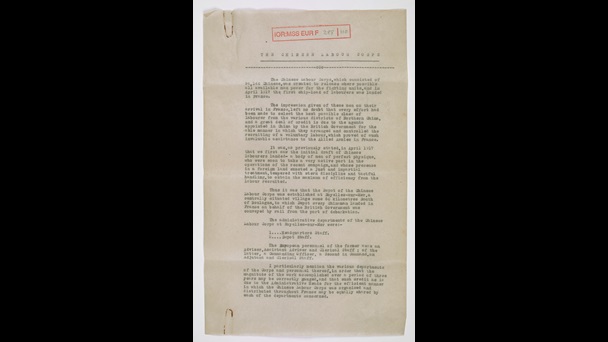 This report details the administrative process of managing the Chinese Labour Corps, it also gives an insight into the day-to-day life of the men working on the Western Front.

The journey of 140,000 Chinese citizens to Europe is an extremely important chapter in both Chinese and world history. While western civilization was facing a major crisis as a result of the war, China was at its own critical moment, striving to abolish its traditional Confucian civilization and embrace a new one that was international in its outlook. These Chinese workers, to a great extent, were messengers between the East and West and at the same time served as harbingers of China’s search for a new national identity.

Photographs of the Chinese Labour Corps in France 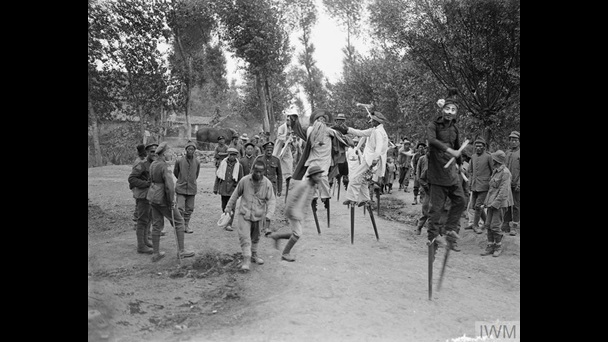 Usage terms This item is available to be shared and re-used under the terms of the IWM Non Commercial Licence.

1917–19: from declaring war to the postwar peace conference

In August 1917, China was finally successful in declaring war on Germany and the Austria-Hungary Empire. Although the Allies now allowed China to join the war, they did not support the Beijing government’s sincere offer to send military troops to Europe. The only exception was France, which seemed very interested in having Chinese soldiers on the Western Front. Nevertheless, despite all the misfortunes that China experienced in connection with its attempts to engage in the First World War, the Chinese people were excited and genuinely jubilant when the fighting ended with the Allies’ victory. When the news reached China, the government immediately declared a three-day national holiday to commence upon the armistice. Furthermore, China had achieved its original goal of being granted a seat at the postwar peace conference.

China held high expectations for the Paris Peace Conference. The result, however, was deep disappointment. Many had hoped that President Woodrow Wilson, whose Fourteen Points speech became an immediate best seller when published in China, was the best qualified statesman to assume the role of champion of human rights generally and the rights of China in particular. But the Great Powers – Britain, France and the USA – treated China unfairly and refused to return Shandong, instead allowing Japan to take over German interests in China. Shandong was an integral part of Chinese territory and was considered to be the cradle of Chinese civilization, the birthplace of Confucius and Mencius, and a Holy Land for the Chinese; its inhabitants were entirely Chinese in race, language and religion. Most of the men who volunteered as labourers were from Shandong.

On 4 May 1919 thousands of students in Beijing took to the streets to protest the decision. Their protest also placed pressure on the Chinese government, whom they believed had displayed weakness at the conference. On 28 June 1919, the two chairs reserved for the Chinese diplomatic delegation for the signing ceremony of the Versailles Treaty were empty. China was the only nation which refused to sign the treaty. By doing this, it told the world that China refused to accept the new world order imposed by the western Allies. At Peking University some cynically joked that Wilson had discovered a jolting new formula with his idealistic world order: ‘14 = 0’. By refusing to compromise on the Shandong issue and by its refusal to sign the Versailles Treaty, China forced the world to take notice of its situation and set the stage for the favorable resolution of the Shandong problem at the Washington Conference in 1921–22.

1919 and after: The May Fourth Movement and China’s turn towards communism

The student protest on 4 May eventually became known as the May Fourth Movement, and marked the end of China’s all-out efforts to join the liberal western system. The movement explicitly linked Chinese domestic politics to international affairs and launched China’s search for an alternative world order and its place within it. The movement conceived itself as the product of a double betrayal and a huge identity vacuum: having first rejected their own traditions and civilization, the Chinese found their aspirations thwarted by the west. This compelled the Chinese to confront challenging questions: What did it now mean to be Chinese? Where was the country heading? What values should the Chinese government adopt? In short, what shape should China’s national identity take? The key theme of the May Fourth Movement was to find a ‘third civilization’ for China to follow and copy.

The so-called third civilization came in the form of Russia. In light of their dismal experience with western-style democracy after 1911, their rejection of Confucian tradition, and their disappointment after the war, the Chinese saw the alternative presented by communism and socialism from Russia’s Soviet regime as a clear solution to China’s problems. The importance and impact of that fatal choice is still felt today, since in theory China remains a communist country.

In short, China’s involvement in the First World War truly made it a world war and transformed the meaning and implications of the conflict both for China and for the world. Its involvement injected new perspectives into the postwar peace conference and the emerging world order. At the same time, the broadly defined period of the Great War signals the dawn of a new age for China and symbolizes the beginning of China’s long journey towards internationalisation, propelling the country into a larger world history of the 20th century. No matter how we evaluate China’s war contribution and effort, by studying China’s involvement we can add a fuller – indeed, even a new – dimension to our collective memory of the war and our intertwined histories.