Commercial advertising as propaganda in World War One

Advertising and marketing historian David Clampin reveals how key propaganda messages were incorporated into commercial advertising for the Home Front and the battlefield, transforming consumer’s relationships with everyday goods.

When war came to Europe in 1914, it coincided with a variety of shifts and developments that were moving many western nations towards a state of modernity as we might recognise it today. As one example, the consumption of goods was being promoted less on rational grounds and more according to emotional appeals. These developing patterns of consumption extended into the war. With reference to Britain in particular, it can be seen how autonomous private concerns played a significant role in the propaganda effort and served to characterise the nature of that conflict in the promotion of their goods.

The nature of marketing communications up to 1914

At the turn of the 20th century, the economy was geared towards the mass production of consumer goods at prices within the reach of many. In a market now virtually flooded with goods, finding demand for these helped to give rise to modern marketing and advertising. Part of that process frequently entailed creating a want, if not a need, for goods where none had existed before. Consumers were encouraged to shift from making rational, fact-based decisions towards choices based more on emotional impulses. This sense that you were buying something beyond the physical product and creating an emotional bond with inanimate goods was well developed by the time of the First World War, and was used to good effect. What is more, the British government itself appeared to sanction such an approach.

The official ‘endorsement’ of commercial advertising

In the face of shortfalls in recruits into the army prior to the outbreak of war, J E B Seeley, the Secretary of State for War, had recruited the services of the publicist Hedley Le Bas of the Caxton Publishing Company. Le Bas’s solution had been to launch an advertising campaign, drawing on emotional appeals, which met with a good deal of success. Subsequently, these services were retained and many in government acknowledged for the first time the contribution that advertising practitioners might make either in an ‘official’ capacity or by their own volition in joining the patriotic crusade as a means of promoting their goods as the nation went to war.

A time of opportunity, a compelling message

As the war developed, there was a surge in newspaper readership as the public clamoured for news from the front. This increase represented large numbers of potential customers to advertisers, who were keen to place advertising in pursuit of those readers who might be inclined to buy their products. Further, given the sense of unity within the nation, simple sales messages could be devised, which keyed into the popular narrative and reinforced pervasive propaganda messages. Patriotism was a recurring motif in commercial advertising, alongside the denigration of the enemy. In this process, buying the products of the Allied nations was absolutely key and extended to distinguishing the Allies’ approach to war in contrast to that of the enemy, as well as tacitly advocating an emotional connection through the consumption of these goods. This is typified in the Gillette advertisement which celebrates the ‘Clean Fighters’ of the Allied forces ‘fighting for clean ideals’[1].

"When your thoughts fly home" - advert for Swan Fountpen 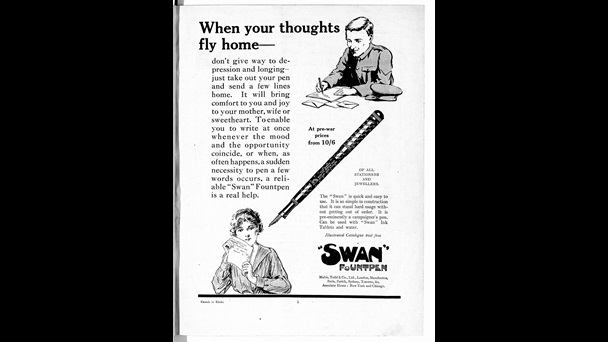 'When your thoughts fly home'. This advertisement, published in 1916, depicts a soldier at war using his 'Swan Fountpen' to write a letter to his family.

Private enterprises stood squarely behind the war effort, reinforced prevalent propaganda messages and, at the same time, benefited through the sale of their goods under such a worthy mantle. Along the way they could draw on a sense of romanticism (which they had been using prior to the war to bring their goods to life in a crowded marketplace), recreating the war in a romantic way and reinforcing recruiting propaganda that spoke to the sense of adventure that characterised the conflict. So it was that the Swan Fountpen was not just a writing implement but also a connection to home and a means to ‘bring comfort to you and joy to your mother, wife or sweetheart’. Conversely, the ‘Greys’ cigarettes, ‘SECOND TO NONE’, captured the ‘excitement’ of a ‘Stirrup charge…at St. Quentin 1914’. In combination, an all-pervasive propaganda message could reach out to ordinary people in the home nations and at the same time nurture a healthy profit for the companies concerned. 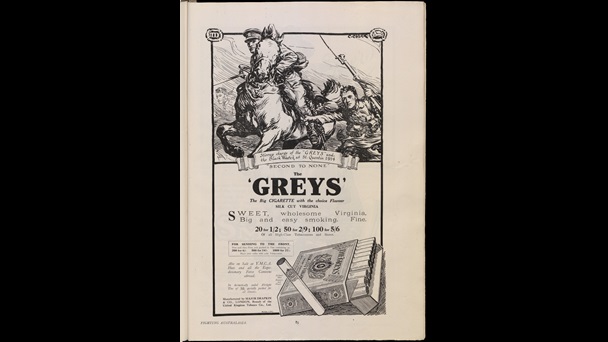 This advertisement for Grey’s cigarettes, published in 1917, captured the 'excitement' of a 'stirrup charge...at St Quentin 1914'.

[1] - Added to this, the First World War presented a great opportunity for Gillette and changed men’s shaving habits for ever. Up to this time, shaving had been accomplished via the skilled application of the straight (or ‘cut-throat’) razor. Indeed, so troublesome was this implement to wield effectively that for many men, shaving was an occasional practice placed in the hands of the professional at the barbers shop. Clearly, this practice was not possible in the front line and conditions generally exacerbated the difficulties of using this implement. Further, many of the men filling the American ranks from 1917 were drawn from rural areas where the practice of wearing a full beard was commonplace. This presented two problems: firstly such beards were prone to lice; and secondly they would not accommodate the effective wearing of a gas mask. In consequence, the US Army determined that all its men should be clean shaven, and called on the recently invented safety razor as the solution. King C Gillette had patented the safety razor in 1904 and, seeing a great opportunity to change traditional habits, struck a deal with the US Army which saw every American soldier sent off to Europe with a safety razor in his backpack. The troops of other nations, seeing this new implement in action and experiencing the difficulties associated with cleanliness, were keen to adopt this new practice and so it was that the safety razor came to eclipse the traditional straight razor.