Contract workers in World War One

Associate Professor Richard Fogarty considers the role of migrating contract workers, especially in France and Great Britain, whose work away from the battlefields helped the war effort.
France during World War One was almost certainly the most diverse, multicultural place in the world. Troops came from around the world to fight on the Western Front that stretched across north-eastern France and through Belgium to the English Channel. But the Front and the areas behind it were not only teeming with soldiers from all corners of the globe; modern industrial war also required large numbers of workers to produce weapons and other necessities for armies and civilians. With so many European men in uniform, the nations at war turned to other sources of labour. Women entered the industrial workforce in larger numbers than before, and some armies relied on prisoners of war and occupied civilian populations (especially in Belgium) to provide labour. In addition, large numbers of Europeans migrated to France to take jobs, especially from Spain, Greece, Italy, and Portugal. But greater cultural and even racial diversity also shaped the world of work and war, as men came from Africa and Asia to toil for the belligerent powers. 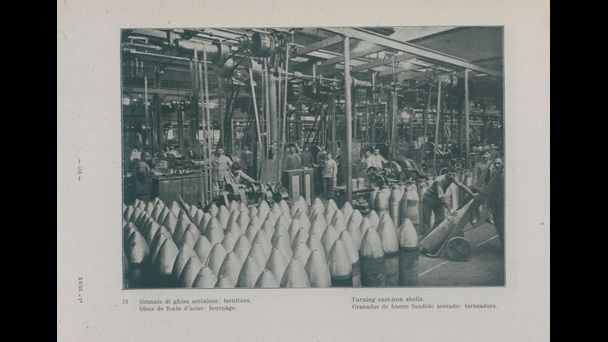 France and its colonial workers

The global reach of European nations’ colonial empires ensured that the conflict was a ‘World War’. France was the most aggressive in drawing on the human resources of its huge empire, second in size only to that of Great Britain, to sustain the war effort in Europe. Nearly 200,000 workers recruited throughout France’s colonies staffed wartime industries. More than half of these men (over 130,000) came from the North African possessions of Algeria, Morocco, and Tunisia, another 50,000 from Indochina (today’s Vietnam, Laos, and Cambodia), and 5,000 from Madagascar. In addition, many of the 500,000 soldiers France recruited in its colonies to serve on the Western Front had as their primary duties war-related labour. This was especially true of men whom the racial prejudices of the day identified as ‘non-warlike’, such as Indochinese and Madagascans. But even allegedly ‘warlike’ West and North Africans often performed labour such as repairing trenches and roads, manning transport services, or even working in factories or on farms. 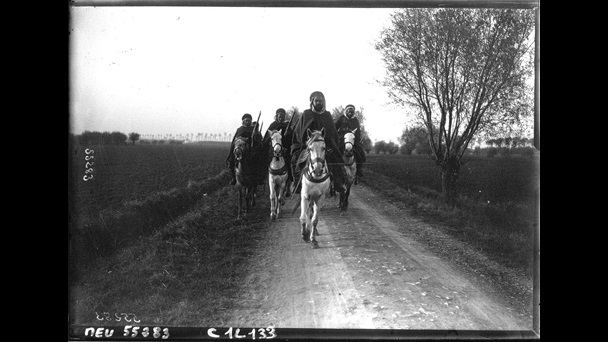 Cavalry patrol of Moroccan Spahis fighting for the French army near Furnes, Belgium, 1914.

Men recruited not as soldiers but explicitly as labourers worked in munitions factories, chemical industries, and agriculture, as longshoremen in ports, and even as lumberjacks. Modern war voraciously consumed all manner of products. Colonial workers earned a wage stipulated in advance in contracts signed at the time of their recruitment, and often earned substantially less than Europeans, especially French natives, doing the same jobs. Still, the wages were attractive to men living in the poverty created by colonial rule, especially in a place like Algeria, so they signed up by the thousand and embarked for France. There they often encountered hostility from native and other European workers, including labour unions, since many assumed that colonial labour drove down overall wage levels. In addition, racial prejudice and fears that colonial men were pursuing and forming sexual liaisons with white French women inside and outside the factories sometimes led to open hostility and even violence. French authorities did their best to keep colonial workers segregated from French society, housing them in guarded barracks and limiting their freedom of movement outside work hours (which were in any case quite long). Nonetheless, a number of men from the colonies managed to interact with French civilians, sometimes finding certain among them surprisingly free of racial prejudice, and some men even married French women and had children.

Other than France, Great Britain made the most widespread use of its colonial manpower resources during the war, especially outside Europe. Some one million Indians served in the armed forces, but tens of thousands of Indians also served as workers, most of them in East Africa and the Middle East. Some 100,000 Egyptians worked in the latter theatre as well. The Union of South Africa, a British Dominion, deployed over 80,000 black Africans as labourers. Racism made the deployment of these men outside Africa controversial, but eventually 21,000 black South Africans worked in France as part of the South African Native Labour Contingent. 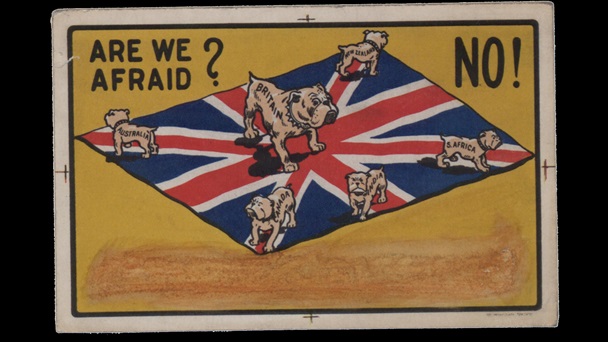 Not all contract workers had a ‘colonial’ relationship with their employers. Although not formally colonized by any European nation, China’s relationship with Western nations at this time was largely dependent and in many ways ‘colonial’. France recruited some 37,000 Chinese workers, who served in much the same capacity and in the same circumstances as labour from the French empire. Great Britain also recruited labourers in China, signing up some 100,000 before the war was finished. The US army employed some of these Chinese workers, as well as North Africans, toward the end of the war and immediately following the Armistice.

Any consideration of the role of contract, especially colonial, labour during World War One must take into account the many ways in which racism and colonial policies shaped the experiences of these men. It is also important to remember the risks of their jobs and the dangers they faced. They performed their work in strenuous wartime circumstances, sometimes close enough to the Front to be injured or killed in the fighting. And even the journey from their homes to their new places of work could be dangerous, since the world’s oceans were battlegrounds too. In February 1917, the Germans sank the SS Mendi, killing over 600 black Africans of the South African Native Labour Contingent. And, finally, it is worth recalling that by far the largest number of labourers served with no contract at all. European colonial powers all forcibly employed hundreds of thousands of Africans to serve as carriers of supplies in military campaigns in Africa. Of the one million Africans who served the British in this capacity in East Africa, some 100,000 died from disease, exhaustion, and enemy action.

Ultimately, then, the global story of World War One is not merely one of soldiers and battles, but also of workers and workplaces. We must also remember that like soldiering, working could be, in its own way, dangerous and deadly.

The condition of the Belgian workmen now refugees in England 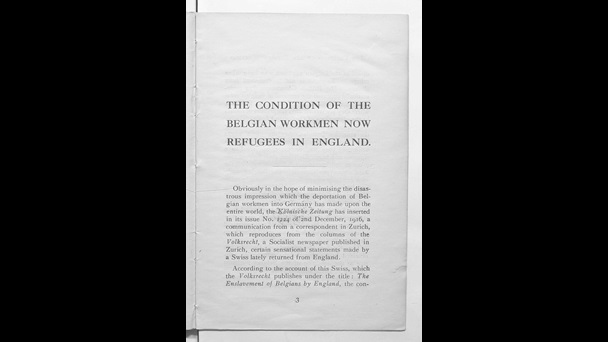 The condition of the Belgian workmen now refugees in England (detail)

Hodges, Geoffrey, Kariakor – The Carrier Corps: The Story of the Military Labour Forces in the Conquest of German East Africa, 1914–1918 (Nairobi, 1997)