Considering factors such as globalization and military advancement, Professor David Stevenson examines the political and diplomatic landscape of Europe before the outbreak of World War One.
Europe in the early 20th century had known no great war, involving all the Continent’s major Powers, since the fall of Napoleon. Although European society had been transformed in the interim, the changes had made war more difficult rather than impossible, and the underpinnings of the long 19th-century peace had grown fragile.

Characteristic of the pre-1914 decades was what we would now call globalization. Trade may have risen from one thirtieth to one third of world production between 1800 and 1913; between 1855 and 1914 investment flows grew 20 times. Europe accounted for nearly two thirds of global trade and even more of global investment, and from the 1890s Europe’s major currencies were fixed in value in relation to each other under the international gold standard. Hundreds of thousands of foreign-born labourers worked in the heavy industries of French Lorraine and Germany’s Ruhr. The British writer Norman Angell in his 1909 best-seller, Europe’s Optical Illusion, maintained that war between advanced modern economies was now irrational.[1] Yet British naval planners saw economic interdependence as making Germany more vulnerable, and the German General Staff considered war remained a viable option, at least if victory came quickly.

A second 19th-century characteristic was democratization. By 1914 all the European Powers had elected lower houses of parliament, and a majority of the adult male population was enfranchised. The press was relatively free, and citizens could form parties and pressure groups. Nonetheless, in Austria-Hungary, Germany, and Russia ministers answered to monarchs rather than to a parliamentary majority, and the military chiefs were not subordinate to civilian statesmen. Moreover, as international tension mounted, public opinion polarized, more moderate and progressive tendencies being offset by nationalism and militarism. Europe’s socialist parties opposed wars of conquest and aggression but were willing to endorse a war fought for just cause and in self-defence, which in 1914 all the governments would claim to be fighting.

The 19th century had also witnessed a succession of military revolutions. At sea, steel had superseded wooden hulls and steam had superseded sail. HMS Dreadnought, launched by Britain in 1906 with turbine engines and 10 12-inch guns, made all existing battleships obsolete. On land, Prussia’s combination of universal liability to conscription, forward strategic planning by a General Staff, and railway-borne mobilization helped win the wars of German unification, and was widely emulated. Breech-loading cannon with rifled steel barrels replaced smooth-bore muzzle-loaders, and infantry rifles replaced muskets. Smokeless high explosive replaced powder in bullets and shells, and the modern field gun fired up to 20 rounds per minute. Yet although on balance these developments favoured defenders over attackers, military planners concluded from the 1904-05 Russo-Japanese War that offensive tactics could still prevail, albeit at much higher cost than before. 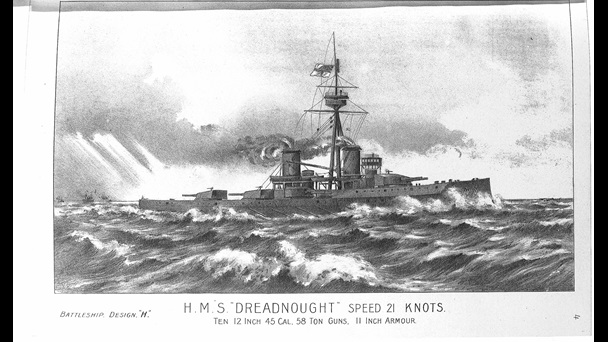 Original designs for battleship HMS Dreadnought, produced by the British Royal Navy in 1905.

War therefore remained possible, and the leading international political institution, the Concert of Europe, was too weak to prevent it. The Concert was not a permanent fixture but rather an understanding that at times of crisis the Powers would try to resolve their differences peacefully through a conference of ambassadors. It was a valuable face-saving device if governments wished to use it, but in 1914 when Britain proposed a conference, Germany encouraged Austria-Hungary to refuse.

A balance of power?

Peace therefore depended on more traditional devices such as the balance of power and deterrence. In the 1870s and 1880s the newly unified German Second Empire under the Chancellorship of Otto von Bismarck was not only the strongest Continental military power but also spun a web of alliances that left France – resentful of its defeat in 1870 – isolated. The Austro-German alliance of 1879 developed into the Triple Alliance (including Italy) in 1882, and Russia too concluded agreements with the German-led bloc. But after Wilhelm II became Emperor he allowed the connection with Russia to lapse, facilitating the formation in 1891-94 of a Franco-Russian alliance. Even so, for a time the two groupings balanced each other, and Russia and France were in rivalry not only with Germany but also (in Central Asia and in Africa) with Britain. So secure did Germany still feel that from 1898 it too challenged Britain through a major programme of North Sea battleship building.

The beginning of the 20th century

After 1904-07, the line-up became more ominous. Russia was weakened for several years after its defeat by Japan. Germany tried but failed to form a German-Franco-Russian bloc excluding Britain. Instead the British compromised over their extra-European disputes with the French in the ‘Entente cordiale’ of 1904 and over those with the Russians in 1907, and began co-operating diplomatically with their former adversaries. In 1902 Italy had reached a separate understanding with France. Germany’s leaders protested that the Triple Entente ‘encircled’ them, while their one remaining reliable ally, Austria-Hungary, was a multi-national empire that was hobbled by inter-ethnic disputes and menaced by a growing confrontation with its neighbour, Serbia, which with Russian encouragement fomented separatism among Austria-Hungary’s South Slavs. After 1905 Europe experienced a succession of diplomatic crises that heightened antagonism between the two blocs. From 1912 the Anglo-German naval race lost impetus, as a land arms race between the Austro-German and Franco-Russian alliances superseded it. In retrospect it is easy to discern the warning signs. But at the time they were less evident, and as late as spring 1914 tensions seemed to be easing. The French Socialist leader, Jean Jaurès, believed the peaceful resolution of so many crises had bred a dangerous complacency. Nonetheless, a general war was not inevitable until deliberate decisions created it.