Evolution and expansion: the International Committee of the Red Cross in World War One

Jenny Tobias explores the work of the Red Cross in World War One, from the provision of essential relief for sick or wounded soldiers and civilians, to the establishment of the International Prisoners of War Agency.

In August 1914 the world went to war, and for 52 long months it endured unrelenting brutality and suffering. The International Committee of the Red Cross (ICRC) was a small organisation at the outset of conflict, yet it grew to play an important role during the First World War.

Nowadays, there are many humanitarian and other charitable organisations that provide essential relief in conflict zones around the world. But during the First World War, the ICRC was usually alone on the battlefield. Furthermore, the protection and assistance it provided to prisoners of war, injured soldiers and civilians was truly innovative. Then and now, the ICRC strives always to remain indifferent to the colour of the uniforms but not to the people wearing them.

During the war, the ICRC maintained contact with all warring parties and employed hundreds of people to help reconnect prisoners of war from both sides with their families. In order to do this, it established the International Prisoners of War Agency to find soldiers who had lost contact with their relatives and try to restore contact between them. In addition the ICRC undertook visits to prison camps to ensure detainees were being kept in acceptable conditions, and campaigned against the use of chemical weapons.

The International Prisoners of War Agency negotiated with countries at war to discover information about prisoners who had been captured. It also responded to requests for information from the families of people who had gone missing.

Entering the archives of the International Prisoners of War Agency, which are located at the Red Cross and Red Crescent museum in Geneva, the massive scale of the tragedy of the First World War becomes clear. Lining the walls are six million index cards that contain information about two million individuals – just a portion of the total who were killed, imprisoned or went missing during the war. They include a certain Captain Charles de Gaulle, later France's president, who was captured by German forces in 1916 at Verdun.

At its inception volunteers, who were friends and relatives of ICRC members, ran the International Prisoners of War Agency. But they were soon snowed under by the 16,500 letters they were receiving daily.

Within a year, the ICRC expanded from just 10 members to some 1,200 staff, including large numbers of women. This reflected changes taking place in wider society at the time, with women entering the workplace to replace men who had gone to the Front. Among them was Renée Marguerite Cramer, the first female to be appointed to the Committee, the governing body of the ICRC. The appointment of a woman to such a senior position was a first for an International Organisation. 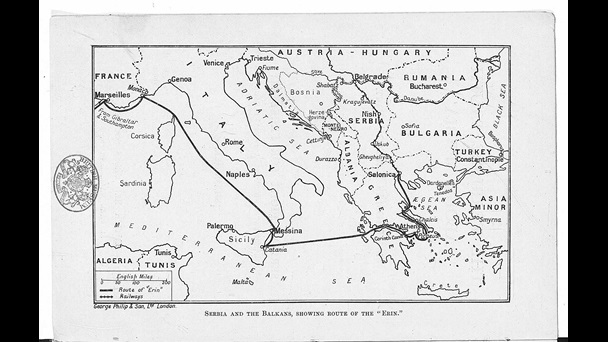 Map showing the route of the steam yacht Erin in January and February 1915. The yacht was used by the Red Cross to transport ambulances, trucks, medical materials and clothing to typhus-stricken Serbia.

Poster and bag for the collection of women's hair 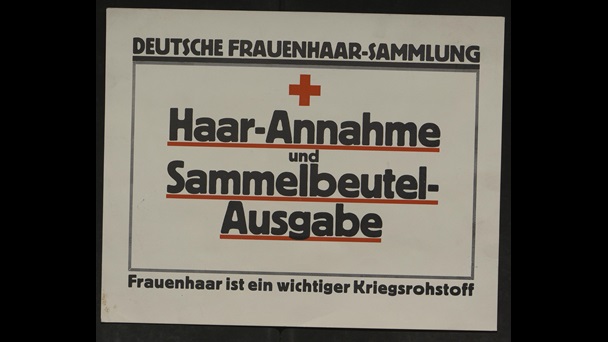 German poster encouraging women to donate their hair to the war effort. Raw materials became scarce during World War One, and human hair was used to make transmission belts.

Visits to Prisoners of War

During this time, the ICRC worked feverishly to secure agreements that would allow its representatives – known as delegates – to inspect the internment camps in Germany, Britain, and France. During the war, teams of ICRC delegates visited 524 prison camps in Europe, Africa and Asia over the course of 54 missions. Monitoring the conditions and treatment of those detained in relation to armed conflict is still a major part of the ICRC’s work today.

Due to its status as a neutral and independent humanitarian organisation, throughout the war the ICRC passed on reports of violations of the laws of war as defined by the 1906 Geneva Convention and the Hague Conventions of 1899 and 1907 to the state concerned. It also protested against inhumane treatment of prisoners and civilians living in occupied territory.

Turkish Prisoners in Egypt, a report by the International Committee of the Red Cross 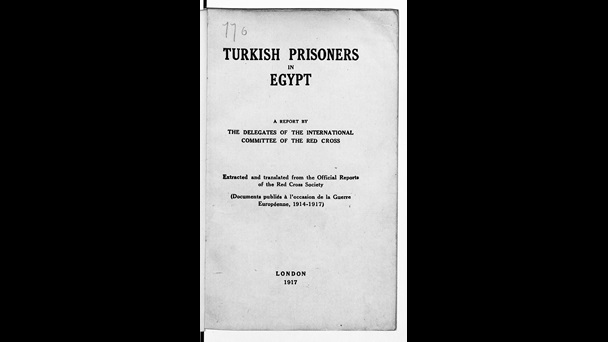 This report, published in 1917 by the Red Cross, details the findings of a series of inspections carried out at British Prisoner of War Camps in Egypt in which Turkish prisoners were interned.

The fight against chemical weapons

The ICRC was, regrettably, unsuccessful in its appeal. Despite declaring support for an agreement prohibiting the use of gas, none of the major powers accepted responsibility for the use of such weapons, laying the blame with the other side. However, the ICRC's efforts would eventually be rewarded by the adoption in Geneva on 17 June 1925 of the Protocol for the Prohibition of the Use in war of Asphyxiating, Poisonous or other Gases and of Bacteriological methods of Warfare. Nowadays, the ban on chemical weapons is also part of customary international humanitarian law, which means it applies to all parties and states even if they have not signed up to the protocol. Violations of this ban are a still a key concern for humanitarians today.

Repatriation and relief operations after November 1918

The armistice of November 1918 did not spell the end for the ICRC’s involvement in the First World War. It turned its attention to the repatriation of prisoners to their home countries and provided aid to civilian populations in countries left destitute by war and suffering from terrible outbreaks of disease. In particular, the organisation helped Austro-German prisoners of war held by Russia and Russian prisoners of war held by the Central Powers, often in squalid conditions. Former captives who were released, sometimes en masse following the end of hostilities, either languished in makeshift camps in countries that were already experiencing serious social and economic crises or tried to make their own way home by foot or on wagons. Watching this devastation unfold, the ICRC was impelled to embark on a vast relief operation for these former prisoners and secured support from governments to organise massive transport operations. In total, the ICRC assisted around half a million ex-prisoners before the official end of ICRC repatriation operations on 30 June 1922.