How would it feel to be a wounded soldier?

Dr Emily Mayhew follows a wounded soldier from the battlefield to the hospital, explaining how stretcher-bearers, surgeons and nurses would help him recover and adjust to his new life.

How would it feel to be a wounded soldier on the Western Front in 1916? The extraordinary material we have from casualties and the people who treated them shows us that the experience of being wounded in battle changes very little over the centuries, even if the medical technology and expertise used to treat wounds has been modernised. The soldiers wounded on battlefields like the Somme, Passchendaele, and Amiens experienced terror, disorientation, pain, fear of death. Then, as they moved through their treatment, they faced the uncertainty of what their new lives would hold. Medics caring for the wounded were not only challenged by the scale and complexity of war injury, but also by the need to preserve the humanity of their patients at the same time as saving their lives.

Many soldiers injured on the battlefield lost consciousness or were badly disorientated by the explosion of a huge shell or the impact of bullets and artillery fragments on their bodies. When they came round and were able to focus, the first thing they wanted to know was where they were and how long they had been unconscious. When soldiers opened their eyes they might try to locate their watch, if they had one (and if it had survived), or look up at the sky to see where the sun was and try to remember where it had been before they fell. Today, a person in the same situation would look for their phone to tell the time, but a large explosion might have damaged it or the battery might have run down while they were unconscious. In the end they would look up at the sun, just like soldiers a century before. After looking at the sun, wounded soldiers would try to work out where they were and what was happening around them. This would probably mean moving, and at this moment they would experience the full pain of their injury – sometimes pain so overwhelming that they would lose consciousness again. This movement in and out of consciousness often lasted for hours.

Panoramic view of the ruins of Ypres, 1st October 1917 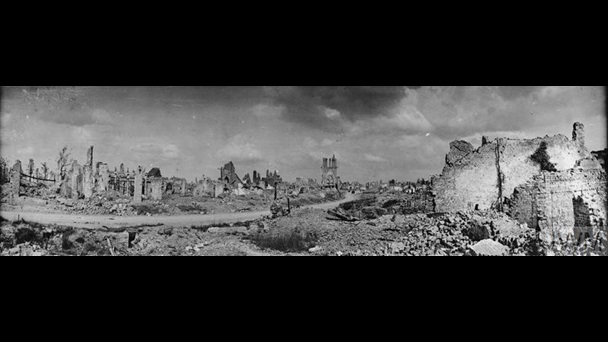 Many soldiers injured on the battlefield often lost consciousness for many hours whilst they waited for medical aid to reach them.

Usage terms © IWM (Q 3220). This item is available to be shared and re-used under the terms of the IWM Non Commercial Licence.

In the minutes or hours before medical aid reached them, wounded soldiers tried to discover where on their bodies their injuries were and how serious they might be. In World War One, as now, soldiers received some training in first aid. Now was the moment to use it: they would reach out to pat around their body to see where it was damp from blood (although if their water bottle had broken, this could be confusing). If they were able, they would take a field dressing (an absorbent cloth pad attached to a bandage, which is still issued to all soldiers) out of their top pocket and apply it to their wound. Often, though, the pain of moving was too great, and soldiers knew that crying out could put them at risk of being wounded again. Many of them lay where they fell, and tried not to move while they waited to be rescued.

Help came in the form of stretcher-bearers. (Today we would call them paramedics or combat medical technicians.) Their job was to find the wounded soldiers – sometimes by listening for their cries – and carry them to safety. Stretcher-bearers had to be strong, very skilled in first aid, and very brave. They went onto the battlefield under heavy fire, with no weapons, and had to focus on the wounded rather than on keeping themselves safe. For many soldiers, the sight of rescue was overwhelming and they cried out again. Often, therefore, the first challenge for stretcher-bearers was getting the casualties they found to be quiet. They had to shush them and comfort them at the same time as assessing and treating their wounds. Only when they had decided that a soldier could be loaded onto their stretcher safely did they stand up and begin to move, first to the aid post behind the front line, and from there to the field hospital. The battlefields of the Western Front were difficult places to walk over, full of heavy mud, shell holes and barbed wire. For both soldier and stretcher-bearer, the journey was difficult and dangerous. 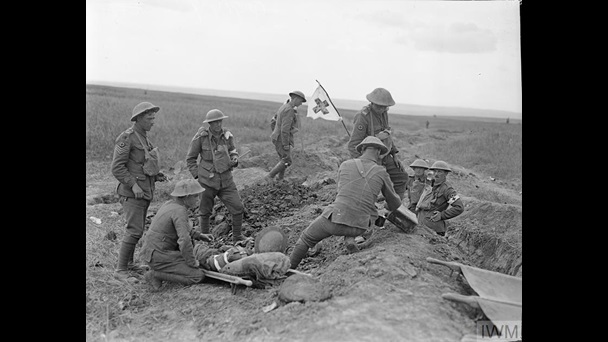 A team of stretcher bearers would go onto the battlefield under heavy fire to find wounded soldiers.

At the field hospital, casualties received treatment and surgery for their wounds. As World War One went on, more and more soldiers had limbs amputated by surgeons. In their civilian lives, most surgeons didn’t do as many amputations in a year as they did in a single day in a military field hospital. After the amputation, just as at the moment of their wounding, soldiers – now patients – had to wake up and once again try to work out what was going on around them. For some this meant looking at themselves in a hospital bed and realising that they couldn’t see their feet under the sheets, or that the arm of their hospital pyjamas was pinned up on their shoulder. Some woke thinking it was night, and then discovered that their eyes and face were damaged and wrapped in bandages. Such injuries required difficult dressing changes and someone to feed the patient special soft food until his facial injuries had recovered. For some, the darkness was permanent: they had been blinded.

General Principles guiding the Treatment of Wounds of War. Conclusions from the Inter-Allied Surgical Conference, 1917 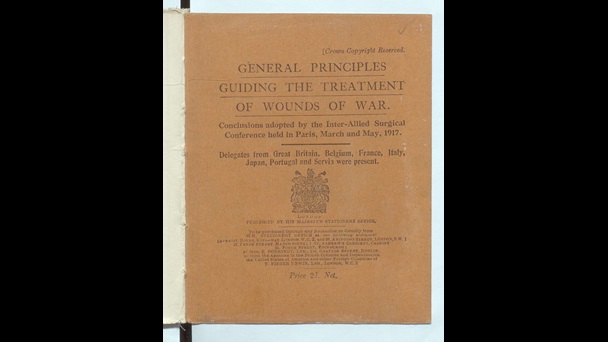 Whatever the nature of his injuries, the first person a soldier met at this traumatic moment was one of the nurses who worked in the field hospital. It was the nurse’s job to wait for her patient to regain consciousness after surgery and then very gently explain what had happened to him – that he had lost a leg or an arm or that his eyesight had been permanently damaged. Once again the soldier might cry out in fear and pain. Pain medication could help physical symptoms, but it was part of the nurse’s job to try to alleviate her patient’s psychological suffering. 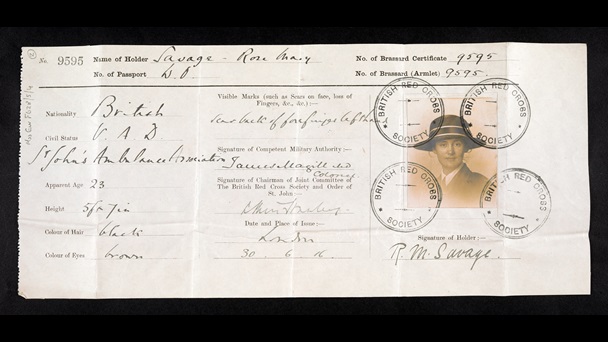 Rose Mary Savage worked as a VAD nurse in hospitals across Rouen. Her role would have been to care for soldiers wounded in battles, as well as in shell and gas attacks.

Usage terms © The British Red Cross has authorised the display of this item using the red cross emblem. The red cross emblem is a special sign of neutrality and protection during armed conflicts. To preserve the protective value of the emblem, there are legal restrictions on use of the emblem and of similar designs. For further information, please see www.redcross.org.uk/emblem.

Nurses took this responsibility seriously. Even though they were very busy, especially if their hospital was near the battlefield, many of them set aside as much time as they could for difficult conversations with their patients. They tried to think of ways to help their patients accept their new lives as casualties. One such way was assisting patients in keeping their families informed. Nurses often wrote letters to the parents and other relations of their patients explaining what had happened. During World War One letters from Europe tended to reach their recipients in Britain within 24 hours. When a patient’s condition improved, a nurse might help him to write letters himself, so that he could re-establish communication and prepare his family for his eventual return home. 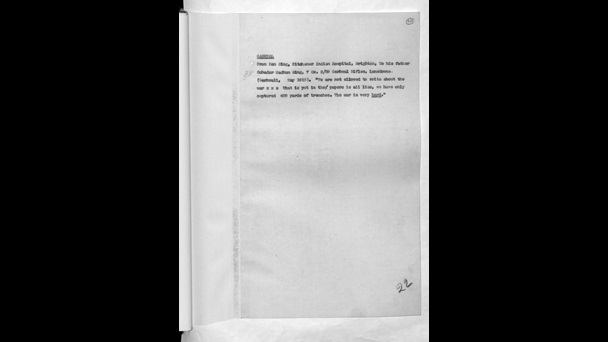 Ram Singh wrote this letter to his father from his hospital bed, in the Kitchener Indian Hospital, in Brighton. 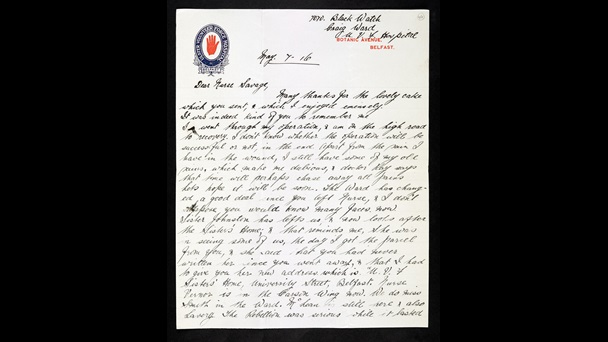 Rose Mary Savage also received letters from former patients. Here, William W Brown tells Savage of his recent operation and the continuous pain he has in the wound.

Nurses also tried to make the ward as comfortable as possible. They might bring in books and music (to be played on a gramophone), and if there was nature nearby, pick flowers and put them in vases on little tables around the beds. There were lots of stray animals on the Western Front, abandoned by families who had either fled or been killed in the fighting. Nurses often adopted these strays and brought them to their wards for the patients to see. Patients could pet the animals, and if they had recovered sufficiently, help the nurses take them out for a walk. We still bring animals into hospitals today because we understand, just as they did then, that stroking a dog can be a therapeutic, calming experience and help patients to deal with what is happening to them at the hospital and the potential longer-term consequences of their illness or injury.

The skills of nurses, stretcher-bearers and surgeons close to the battlefields of World War One were crucial to saving the lives of millions of wounded soldiers. But it wasn’t just their technical medical skills that mattered. It was also their ability to understand what those first moments after waking were like for a person whose life was never going to be the same again. No matter when or where, those moments are the same for all injured human beings. The voices of those who suffered and those who treated the suffering on the Western Front are as important now as they were a century ago. Listening to them helps us understand the terror and despair of those who are wounded today.