From organised religion to visions of angels on the battlefield, Curator Dr Matthew Shaw explores the profound impact of World War One on religion, belief and superstition for individuals and communities around the world.
The closeness of death made belief – and its opposite – a pressing issue for the millions of men serving on the front and for those left behind at home. The society of the day was a profoundly religious one, with faith integrated into all aspects of life. Yet the religious picture of pre-war society was also a complex one, with a dense range of belief and superstition varying from village to village and region to region, as much as from one soul to the next. Russian serfs, Welsh coalminers, Punjabi volunteers, Lyonnais republicans differed in their belief, unbelief, conformity and commitment as much as they shared a common view of life and death.

The experience of the war also shaped people’s belief. For some, the futility and brutality of the lethal conflict destroyed any vestige of faith, while others found refuge in their religion. Often, the pain of war altered, but did not erase, faith. Letters from Punjabi Muslim soldiers reveal that they wrote home, asking for people in India to save them and ‘that He may stop this calamity’. Superstition was also rife in the trenches, with lucky charms or routines offering some small measure of comfort and control at a time when life and death seemed random and out of control. For those on the Home Front, and for the survivors and the bereaved after the war, contact with the afterlife offered some gleam of comfort. Organised religion attempted to rise to the challenge of the war, and tried to meet the social challenges of demobilisation, economic depression and political strife that accompanied the war and its aftermath.

Although some organisations, such as the Society of Friends (often known as the Quakers) condemned the war, most faith groups gave their support, justifying the cause in sermons and organising services offering prayers for those with the forces. The European armies often had a close relationship to the established church, and also appointed chaplains (including a small number of Jewish rabbis) to serve the spiritual needs of those in service. Christian padres offered communion to men at the Front and behind the lines, and attempted to give some form of pastoral care.

Other religious organisations offered support in any number of ways, including tracts sent to the soldiers by groups promoting all variants of faith: Anglo-Catholic reflections, evangelical prayerbooks for study groups, and Qu’rans. More esoteric thinkers found that it was their moment to publish warnings of the end of the world, the need to repent or a whole host of spiritual-related speculations.

It is hard for historians to measure, or even define, what faith meant for the men at the Front. For societies deeply infused with religious tradition and practices, it seems only natural that religious symbols were called upon during the intense experiences of industrialised war. Stories of angels aiding wounded soldiers quickly took root in the popular imagination – at home as well as at the Front (and were aided by a press looking for such stories). The destruction of churches in northern France and Belgium also took on special significance, revealing an attack on civilisation by a barbarous enemy, and seeming emblematic of a hellish, fallen world. Images of such destruction were reproduced countless times in postcards and photographic mementos.

Many contemporaries noted that fatalism was more help than the comforts of organised religion. Death and mutilation struck randomly. Faced with the uncertainty and fear of bullets and, especially, artillery bombardments, troops repeated the fatalistic mantra ‘If your name is on the shell you will get it’. The fatalism evident in Edward FitzGerald’s translation, the Rubaiyat of Omar Khayyam, had a vogue among some of the officer class. Traditional faith also still had its place. A Sikh soldier wrote home from the Brighton recuperation hospital with the thought that ‘God alone directs events’ (and noted he was drinking tea as an ‘amrat’: a way to ‘to purge away all sin’). Mass was received more regularly closer to the Front than behind, and soldiers still prayed under fire or at times of stress.

For many, church and patriotism were closely linked, and many early volunteers were churchgoers convinced by the justness of the cause. When the United States joined the war in 1917, many of its soldiers were fired up by what they believed was the righteousness of their cause – a belief in liberty and progress – a view, it is suggested by recent research, that continued to influence many after their return to America. For many, ideas of patriotism, comradeship, and home and country were bound up with the teaching of their faith.

Trench religion has attracted the attentions of most researchers, but historians are beginning to understand more about religion on the Home Front. The picture was a complex one, which is only partly revealed by the statistics. In Britain, refugees and colonial labourers increased the numbers of those practicing the Catholic, Jewish and Islamic faiths. Figures for adult communicants, who stood at a little under a third of the adult population, fell slightly during the war (by around 6%) after an initial surge in the early weeks of the conflict. However, numbers of Anglican worshippers increased slightly for a few years at the end of the war, as did those of Roman Catholics and the Free Church. Methodism declined. The trends seem to continue the gradual pre-war decline in religious observance, as communities were disrupted by industrial and social change, population growth was unmatched by expansion of religious institutions and personnel, and intellectual culture shifted towards a more secular world view.

This said, national governments remained closely linked to the established churches. In Britain, the government enquired into to the extent to which the Anglican Church had offered pastoral and spiritual care, while in France, the new government restored its relationship with the Vatican, and the newly-acquired territory of Alsace-Lorraine was allowed to retain Catholic influence in schools. The feast day of Joan of Arc, who was canonised by the Roman Catholic Church in 1920, obtained the status of a national festival. Birth control was made illegal, combining the patriotic need to repopulate French soil with Catholic teaching on contraception.

Away from politics, the search for mystical or religious explanations led to a heightened interest in a host of practices that fell outside established or non-conformist churches. With so many families mourning fathers, brothers or sons, the chance of some communication with the afterlife led to a dramatic rise in the popularity of Spiritualism.

Other forms of folk religion came to the fore, as populations attempted to cope with the terrible loss of life. Impromptu shrines were established in many towns and villages, and wives, mothers and other family members lit candles in the hope of good news, or in memory of those that they had recently lost. In Britain, many of these were later replaced by war memorials, listing the names of those who had died, transforming many public spaces into sites of mourning. Churches remained central to national acts of memorialisation, with services and parades forming the backbone of commemoration up and down the land and drawing on the religious language of sacrifice to perhaps give some sort of meaning to the years of struggle and loss. 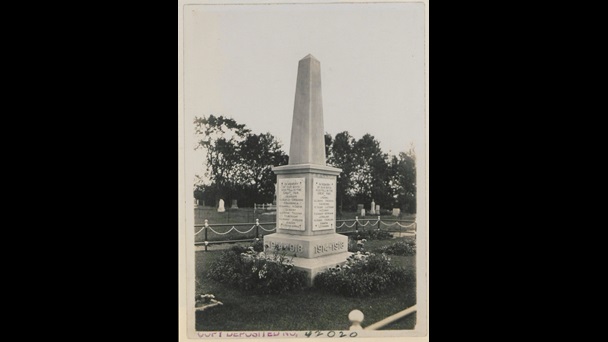 A public memorial with carved list of names of fallen soldiers located in Fort Frances, Ontario.