How did soldiers cope with war?

Curator Dr Matthew Shaw, explores notions of patriotism, social cohesion, routine and propaganda, to ask how soldiers of World War One were able to psychologically cope with the realities of combat.

Given our understanding of the horrors of war, it is often difficult to understand how men coped with life at the Front during the First World War. Many, of course, did not: it is during this period that shell shock and what we now know as post-traumatic stress disorder were first described and diagnosed . Hundreds, across all the armies involved in the war, deserted, and both sides faced large mutinies – among the French in 1917 and by the German navy in 1918, as well the Russian Revolution in 1917. But these aside, the majority of those serving followed orders and often acted with enormous courage and bravery, as well as killing their fellow men. What allowed them to do this?

The ability for both sides to place so many men in the field for so long is testament not just to the power and control the military could exert but also to the strength of belief of those involved in the fighting. It is impossible to understand how men volunteered, accepted conscription and continued to fight without taking into account their beliefs about the war.

While individuals varied greatly, there are some common themes that run through soldiers’ diaries and letters and point to how they saw the call to arms and the nature of battle. The military was also especially interested in morale, and took pains to measure what the troops were feeling and thinking.

Many British volunteers, and later conscripts, saw the German threat as very real. Belgian soldiers were fighting for their homeland (although linguistic allegiances complicated their sympathies) and France knew it faced a repeat of the German invasion of 1870. For Austro-Hungarians, the Archduke had been assassinated, and Germans could believe that they were fighting for an equal place with the other European empires and were resisting Russian aggression. For soldiers, these patriotic notions were also mixed with other emotions, as well as a good dose of realism. Few really thought that the war would be over quickly, at least after the first few months had passed. Many served out of thought for their families and friends as much as through loyalty to their country. For others, the promise of regular pay and help for their families might have influenced their decision and motivation to serve. Later in the war, rumours of peace or victory repeatedly spread along the Fronts, giving men an illusion that the end of the conflict was near (the hope of leave also served a similar purpose).

Given the size of the army and the presence of a large number of either recent volunteers or conscripts, something about the nature of the society from which the men were drawn no doubt influenced attitudes towards military service. Britain’s high-levels of industrialisation, and workers’ adaptation to the rigours and boredom of often-harsh factory life, may have prepared men for the Front, while the social cohesion (and acceptance of paternalism) evident in British society was reflected in good officer-ranks relations. In contrast, the hierarchy and militarism of the German army and the ‘war-enthusiasm’ of many volunteers led to disillusionment and eventually radicalisation of the ranks.

Rest and recreation played some part in the resilience of British troops, who were able to enjoy some of the leisure activities they enjoyed in civilian life during regular times away from the Front: music hall, cinema and organised sports offered some form of respite.

Despite the famous (but by no means ubiquitous) truces of the first winter of the war, hatred of the enemy – and even the desire to kill – fuelled many soldiers’ ability to keep fighting. Revenge for friends and companions killed, and the experience of being shot at or bombarded, combined with pervasive propaganda and helped to instil national hatred as the war continued.

In parallel to these feelings, the military unit could provide an alternative set of communal bonds. Soldiers often wrote about their sense of comradeship and friendship with their fellow men. Many fought for each other as much as for remoter loyalties such as to king and country. 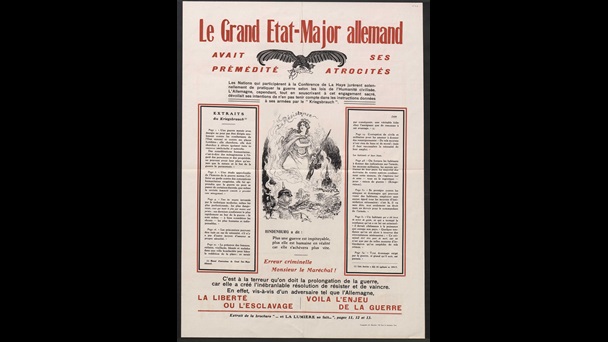 This French poster is an example of an attempt to mobilise troops. It portrays Germany as the enemy of both individual freedom and international treaties; evil versus good.

Men responded differently under fire. For many, the helplessness of suffering artillery bombardment was the hardest thing to deal with. Many could not stay hunkered down but could only cope with the noise and danger of death by walking around, thereby increasing their risk of becoming a casualty. Group panic could break out during an attack, as could more serious breaches of discipline, particularly when troops were especially exhausted or bore grievances against the officers. Those immediately thrown into heavy action tended to cope less well than novices who were gradually exposed to conflict.

As soldiers spent more time under fire, they tended to develop what among German troops was termed ‘Dickfelligkeit’ (‘thick-skinnedness’) and became hardened to the rigours of the Front. Veteran soldiers learned to pay attention to their environment, taking advantage of cover and working better under fire. In general, older hands did better with managing the intense feeling of terror that inflicted itself on those under fire.

Soldiers also had to cope with long stretches of anxious waiting, or even boredom, as well as responding to or participating in attacks. To counteract this, busy routines were put in place, ensuring that trenches were repaired, men supplied, and all was ready for the long, wakeful nights (daytime was usually too dangerous for major activity). Soldiers could also comfort themselves with the knowledge of the inefficiency of most First World War weaponry. Men often resorted to black or gallows humour, as well as a bitter fatalism and superstition, as a means of dealing with everyday reality; doses of rum may also have played their part in steadying nerves.

Many, of course, did not cope with the stresses of the war. This manifested itself in a number of ways, including the reporting of physical ailments, such as trench foot, which, in the British army, was tracked as a marker of morale. Recognising that a rise in certain diseases was linked to problems with morale, the British army recorded the incidence of trench foot and asked officers to produce a report if the number rose. Others responded to the strains with what was called ‘shirking’, a general lassitude and lack of aggression in combat.

Medical opinion, and the rates of psychological breakdown after returning to the field, suggested that those who temporarily left their post (that is, were convicted of the charge of ‘Absence without Leave’) were suffering from the mental effects of war.

Suicide offered another way out. It was much underreported, as at least 3,828 German soldiers killed themselves; a figure that does not reflect the numbers who simply walked into enemy fire or whose death was ambiguous.

Those that returned also had to readjust to civilian life, often during periods of great political and social upheaval. Millions also had to cope with physical trauma or the loss of family members and friends. Many men found it difficult to talk about their experiences, or found it hard to relate their sense of service with a society that increasingly came to lament the loss. The psychological consequences of the war continued to be felt for a generation or more.